Have you ever counted how many applications are installed on your device with a purpose of communication? SMS app, email, Twitter, Facebook, LinkedIn, WhatsApp, Google Hangouts, Line and a few more if you are a regular Android user while professionals who like to stay productive using their smartphones probably have even more of those.

A new application for Android devices just hit Google Play store – Snowball, currently in Beta, is a free mobile app that embraces your favorite social applications and brings all of those messages in one user interface. Please note that this is not a messaging application – it is rather an organizer that taps into Android system notifications and allows users view all those messages and interact with the audience from multiple applications from a single user interface. 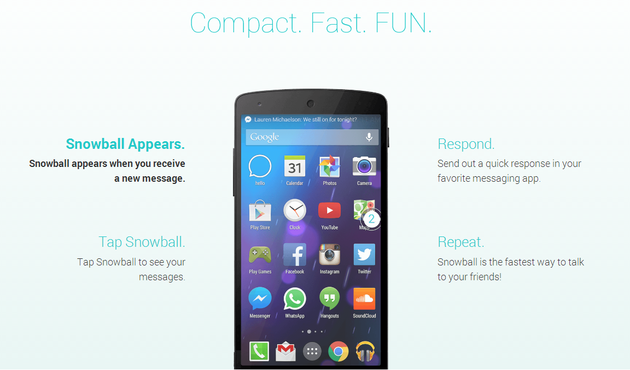 The amount of communication apps has users jumping from one to the other, but would you like to have one single user interface for all those messages, since it’s a lot of apps to toggle between with a single purpose of communication, and Snowball’s developers say they heard a lot of users say that having to do “all this context switching between apps to participate in conversation is kind of a silly thing.”

Users will be able to access the application from anywhere on their phone, just like the Link Bubble browser. Snowball is currently available in a limited set of countries, with a wider set coming in the next updates.

Snowball is the creation of Jeson Patel and Anish Acharya who previously worked for Google, Amazon and Microsoft, and are known for their projects like Google Play Games and the mobile UI of Google+. Their app does not tap into the messenger apps’ APIs, and is not a competitor to them. Instead it taps into Android system notifications and harnesses message notifications bringing them into a single inbox. The app is currently exclusive to Android OS since the same implementation will not work on iOS.

Patel and Acharya also announced a seed funding round for more than $2 million and suggested that Snowball is only the first application in the series that are currently in development in their labs.