Nightmare: Malaria is an eerie and heartbreaking game featuring a little girl as a protagonist. The intro starts with Susan Sarandon narrating a story about a little princess that needs protection…

Sounds melodramatic, doesn’t it? Maybe it is, but the merciless reality behind the game provides for the creepy atmosphere while gorgeous visuals, slo-mo gameplay and lulling voice of one and only Susan Sarandon pile up in what results to be a great free game that supports an important cause – raising awareness about malaria. 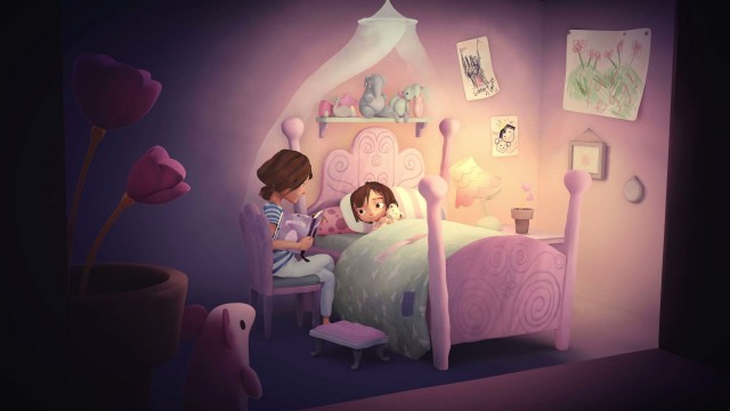 The introductory cut scene shows a little girl whose mother is cuddling her to sleep. The girl dozes off, and the entire game takes place in her sub consciousness, or, as the title suggests, in her nightmare. Turns out the girl is sick with malaria, so the childish inner world of Teddy bears and bunnies is invaded by giant and utterly terrifying mosquitoes that chase the girl as she travels through her own infected blood system and brain cells.

The only safe place to hide from the mosquitoes is the net tent, but you never really know when the predators are coming. The girls hops from cell to tissue collecting Teddy bears and saving them, while the killer mosquitoes are hunting her.

Nightmare: Malaria is similar to Badland in the atmosphere and mechanics. There are two control buttons at the bottom of the display – one to jump, the other to move backward or forward, which you define by dragging the button left or right.

The controls are smooth and responsive, but it takes a while to get used to the game’s mechanics and see how to move the girl the right way. The jumping and gliding, or floating, comes easy, but collecting bear tokens requires patience and precision.

Escaping from the mosquitoes brings the nightmarish ambience that defines the entire gameplay. Once the mosquito catches up with the girl, it strikes her with his poisonous green needle and she dies.

The adventure takes place in two environments – blood stream and brain, with 22 intoxicating levels in total. The difficulty is moderate, so young kids can play it, too.

Nightmare: Malaria is dazzling as much as it is eerie, and you can see it for yourself from the screenshots and the teaser. The games that support a good cause used to make a lot of ad noise, but tended to present crappy playability and mediocre design, which ended up creating a stereotype that good cause games are ‘meh.’ This is not the case with Nightmare: Malaria.

As Brian Kehrer, the Technical Director of the game, said, ”This is not another advergame. We focused our efforts on creating a visually rich and enjoyable, if disturbing, experience.” This entry is a perfect example of a game that makes a statement, but at the same time focuses on entertaining the player, providing a great deal of high quality and atmospheric eye candy and a solid gameplay. This successful combination help the team behind it make a better point with their message.

The game is free and offers no in-app purchases. There is a reminder to donate to the good cause of buying repellent-sprayed anti-mosquito nets. $3 buy a net for a child in Africa, where over 70% of malaria infected patients are children under the age of five.

You can skip the donate button and keep playing, which does not influence the gameplay. There are no countdown timers until you get another pack of lives to play. Donate or not to donate is totally up to you, and we encourage you donate. After all, anyone can fall victim to one of the mosquito-transmitted diseases, which are numerous.

If you enjoyed Badland, you will like Nightmare: Malaria. The game features a 5-year old girl traveling through her own malaria infected blood stream, saving teddy bears and escaping killer mosquitoes. Fantastic psychedelic visuals, addictive and engrossing gameplay wrapped into soothing, hypnotizing voice of Susan Sarandon result in an excellent high quality game I wouldn’t mind buying if it were paid. The fact that it is free of charge and IAPs-free make it a no-brainer, so go get it. By the way, the game was created by intern students from scratch, which only proves the mobile games industry is going to get a major quality boost when youngsters hatch.

Oh, and don’t forget to donate!