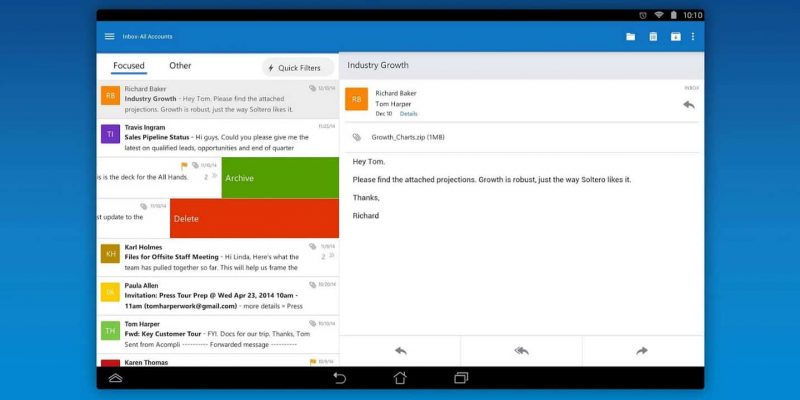 Microsoft has been tirelessly working to improve their apps on Android, prior to Windows 10 launch. Today the Outlook app received several improvements, as it was just updated to v. 1.2.8.

The comprehensive e-mail client offers a variety of features, from automated sorting and fast swipe actions, to a built-in calendar, support for cloud-storage attachments and advanced inbox filters for quickly finding messages, files and people.

It seems like Outlook had some performance issues, specifically during launch, and according to the changelog this problem is now resolved, at least for the most part.

An area of the app that was significantly improved is email composing, which now lets users create and format new messages much faster. Furthermore, folder navigation has been optimized and the Spam/Junk folders have been restored.

Another fix brought by the update is getting rid of the delay between the delete action for messages in the trash folder, and the actual result. Outlook still has some visual annoyances on Android, like the way to similar read and unread, plus the calendar function is somewhat limited at this point.

Looking at how Redmond is determined to bring their most popular apps and services for Android, on par with those on Windows and Windows Phone, I suspect the Outlook app for Google’s ecosystem will get at least one more update before Windows 10 launches. I did mention all the new features and improvements bundled in the current release, but if you’re interested, here is the official changelog:

Download and install the latest Outlook update from the Play Store and let us know if you like the improvements and what else would you like to see added within the app!