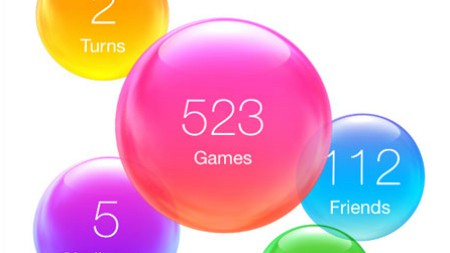 Frustrated with Game Center’s leaderboards? Feel like cheaters are destroying the High-Score gaming community? Here are some ways to help deal with leaderboard trolls.

If you’ve ever checked the leaderboards or top high-scores of any iOS game that uses Game Center, then you’ve surely seen some impressive scores and times. So impressive that they might even seem impossible. Let’s take one of the newer games for example Bardbarian, the game offers a timed survival mode to test your ability to stay alive while being surrounded by hoards of monsters. Currently the number 1 ranked user “Rali787” (Yes, I have no issue calling out cheaters) has apparently survived this mode longer than time itself, with a time of 2,562,047,788,015,215:30:07. That is with a relatively new game, what about a popular veteran title like Fruit Ninja? The Top 34 Fruit Ninja Players all share the same score of 9,223,372,036,854,775,807. Rank 35 has a score of 500,000,000,000,000 and Rank 36 has a score of 2,147,483,647. Now, that last score could possibly be a realistic score, let’s just say it is,  shouldn’t that user have the honor of holding top rank and not rank 36? 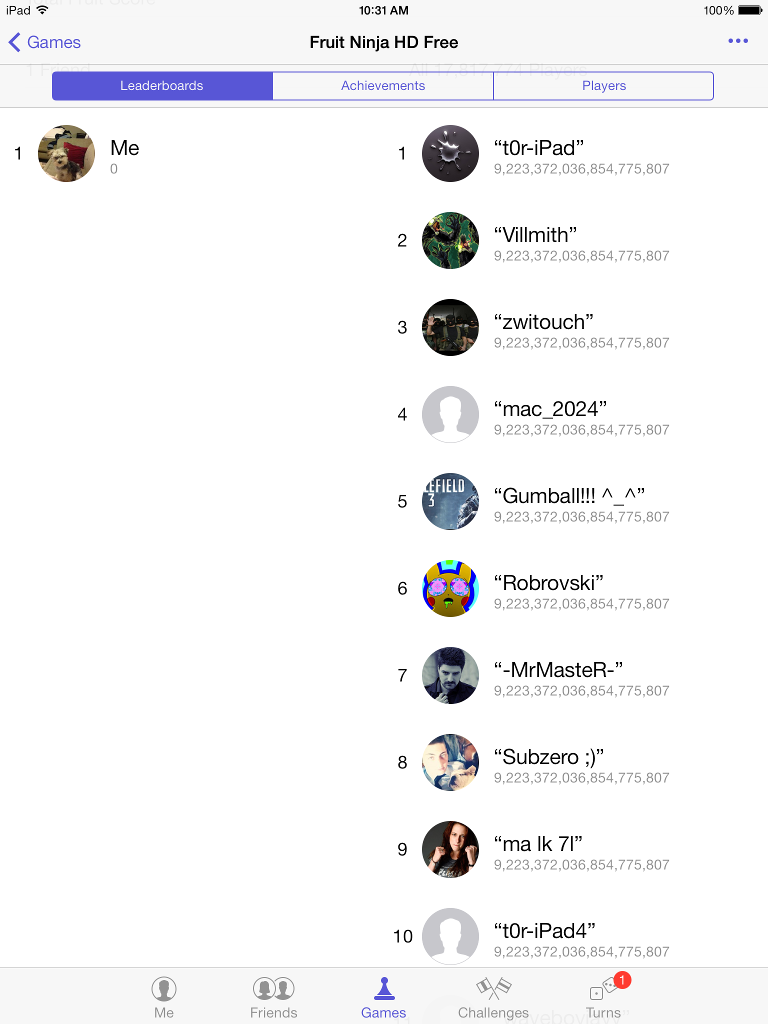 For anyone who has payed any attention to the Game Center leaderboards even in the slightest has probably noticed this. I have yet to play a game with over 100,000 downloads that doesn’t have at least one cheater on the leaderboards. Users who enjoy striving to the top with best times or high scores have been outraged for years over these unreachable score, with several articles and blog posts across the internet with users screaming “Cheat!” with their finger pointed at Game Center, Apple has finally decided to help take action against these crimes.

Prior to iOS 7, there was absolute no way to combat the cheaters that reigned supreme on the leaderboards, but with the much needed extreme make-over to the Game Center, Apple had added some functionality to help take down high scores. Back in Oct, 2013 Apple decided to hand the top 100 ranks to the developers, so that any developer that cares to keep their games leaderboards clean would have the ability to remove false scores. This is definitely a step in the right direction, not allowing developers to manage their leaderboards left them at the mercy of Apple’s leaderboard management, which was non-existent until recently.

So what can we do as players to help clean up the high-scores of out favorite titles? First, we can contact the developer of the game titles directly reporting the false claims of achievement, hopefully the developers care to keep their leaderboards clean and will keep a better eye on wrongful scores. Apple has also included a “Report” action in the Game Center allowing any user to report another user for the following: Cheating, Inappropriate Picture, Inappropriate Nickname, Inappropriate Status, or Other Problem. You are than allowed a single line of text to explain the reason for reporting the user.

First step is to find the suspected cheater under the games section of Game Center. Tapping on their name will bring up a box that gives you a few options like additional info, sending a friend request, and the one we’re looking for, which is “Report” located in the top right corner. 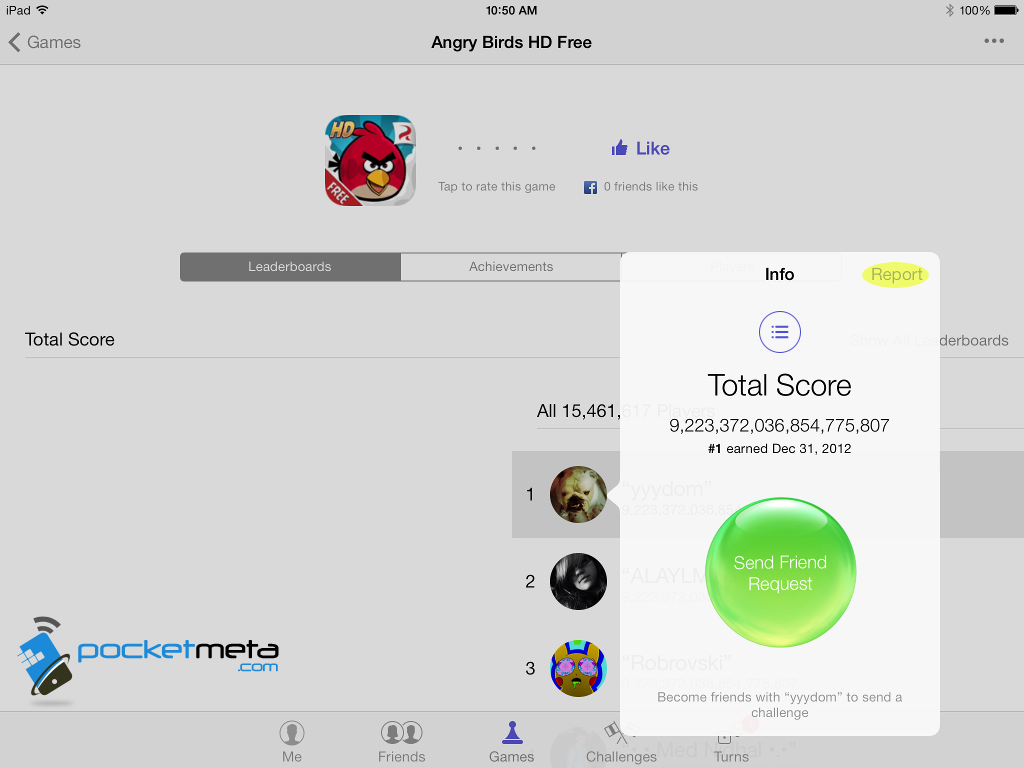 Once you’ve selected to report the user, you’re given a list with common reasons for reporting. Select the top option labeled “Cheating”. 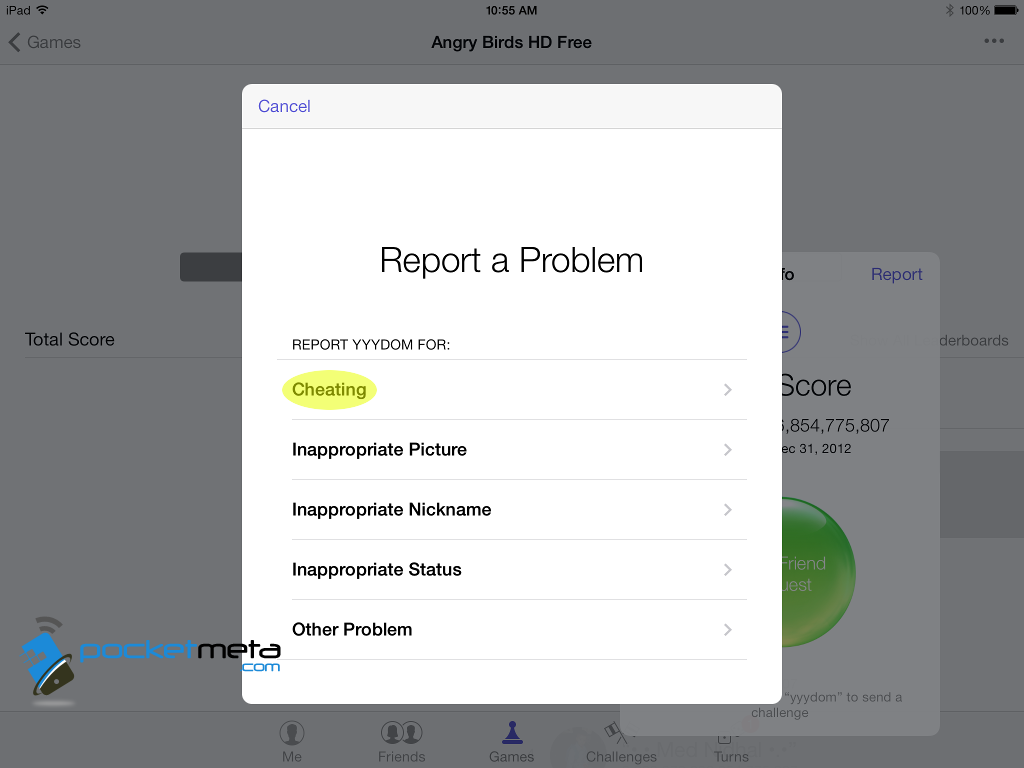 The next section will allow you to enter a string of text to describe the reason you are reporting that user. It doesn’t state a maximum character length, but I would suggest keeping it as short and sweet as possible. I have no doubt that whoever monitors these reports has thousands to sift through and reading your long submission of why cheaters are ruining the Game Center, probably isn’t helping them do their job in a timely fashion. 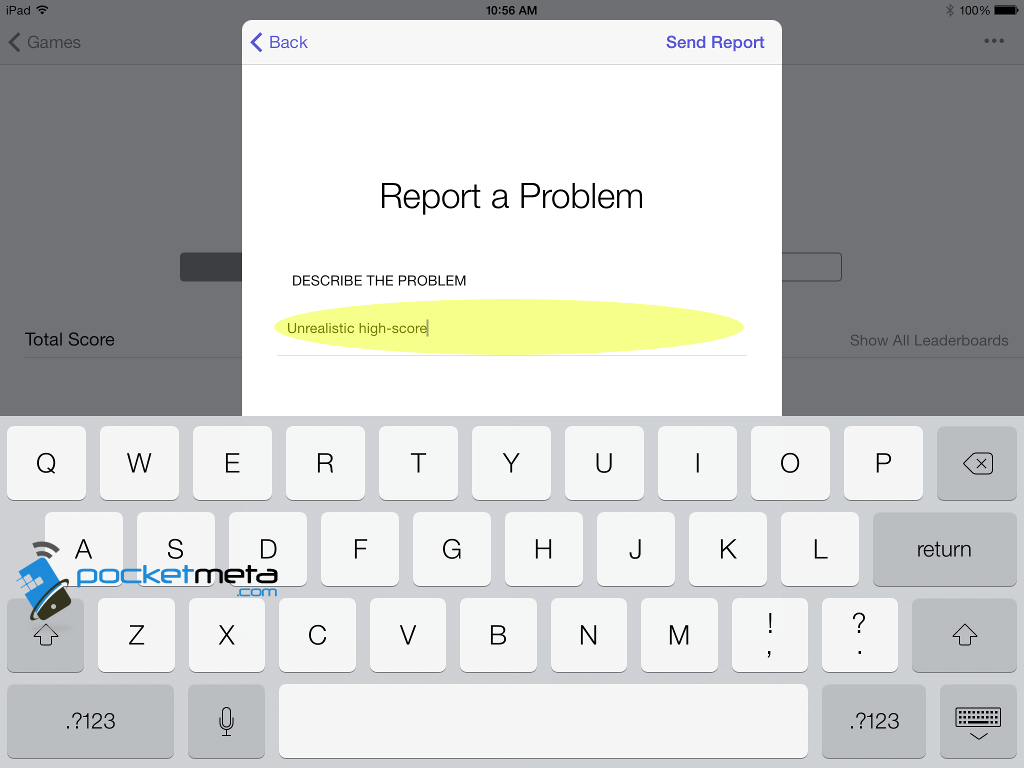 There you have it, reporting cheaters on Game Center is about as easy as it gets. That’s not to say there isn’t a ton of work ahead for users and moderators alike, many games have 30-100 unrealistic scores if not even more. So reporting users can definitely be a choir, but if leaderboard enthusiasts work together to continue reporting users, we should be able to work towards a cleaner Game Center.

Unfortunately, this does nothing to stop people from cheating to produce more believable score, but at least with the impossible scores gone you can have a fighting chance to finally earn those bragging rights you’ve worked so hard to claim. Apple does appear to be doing what they can to help prevent cheaters from hitting the boards, by giving developers new tools that will help recognize suspicious activity and to help manage players accordingly. Developers also are now able to create score ceilings that prevent impossible scores from being achieved, meaning those who are trying to submit huge scores will find their efforts will never even see the light of day on the leaderboards.

Here are a few side notes about the massive update to Game Center beyond recognizing and dealing with cheaters. Developers now have the ability to categorize their score boards into different section, so some games you may see a leaderboard for certain difficulty settings or different modes. I feel that this is an excellent way to revitalize the high-score community as it will give players more areas to achieve.

Leaderboard ranks have been increased from Top 100 to Top 500 allowing more players to see their high scores displayed for the world to see. These leaderboards can also be managed directly from iTunes. Challenges are another new addition that allows players to submit challenges to their friends, so if you think your friend can’t beat your score, you can send the challenge directly to them. If they’re able to meet the challenge, the achievement will be displayed in their Game Center profile.

Game achievements have also been placed in the Game Center, which allows developers to create their own challenges to provide players with. It works just like achievements and trophy’s do with console and PC games. Other improvements outside of scores, times, and leaderboards are improvements to controller support as well as better support for turn-based multiplayer games.

So it finally looks like Game Center is shaping up to be more than another useless icon pinned to your home screen. Hopefully more people start to realize these new improvements and features, and begin to make use of them. With any luck, Apple will continue to improving a all around better and more connected game experience for iOS users.

Let us know what you think about the new Game Center update and feel free to share your own horror stories about cheaters on leaderboards in the comments below. You can also like our Facebook page, follow us on Twitter, and add us to your circles in Google+ to keep yourself up to date on all things mobile.