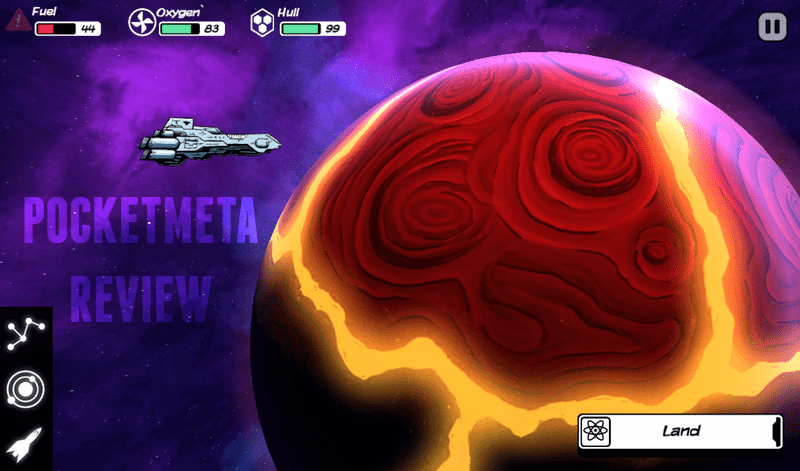 Out There: Ω Edition

Developer: Mi-Clos Studio
Genre: Strategy
Download from Google Play
Download from iTunes
Price: $4.99
Out There Omega Edition by Siddhartha Barnhoorn
Out There was a mega-hit when it launched on mobile in 2014, and last year we found out that MiClos Studio, a one-man indie game studio, was preparing an Omega Edition of its original game. It first rolled out to PCs and Macs in April 2015, and last month it finally landed on iOS and Android. For those of you who previously purchased the original title, Out There Omega Edition is available as a free update while the newcomers will have to cash out $4.99 for the whole game. If you haven’t played the game before, read on for more insight on whether it’s worth a purchase. If you are the owner of the original game, head over to install the DLC – do not hesitate. 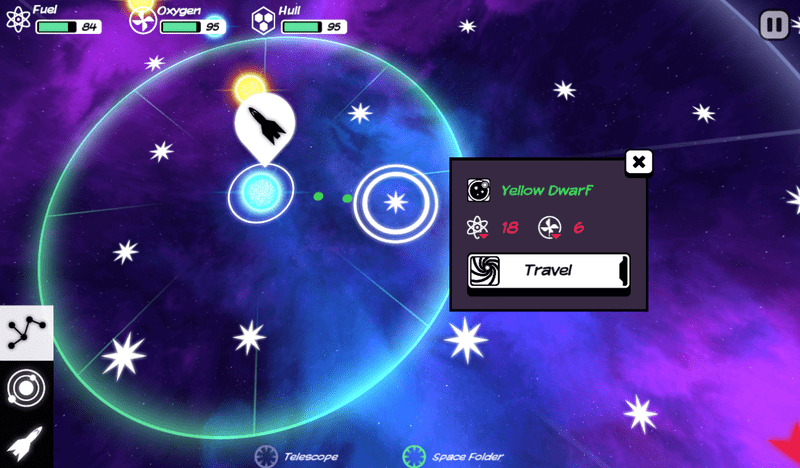 In terms of gameplay mechanics, little has changed, but let me throw in a brief overview for those who haven’t played it before.

Out There is a lonesome, desperate attempt to survive alone and lost in space. You play as an astronaut on a mission gone terribly wrong, and you wake up from stasis in an unknown sector of the universe with a very limited stock of fuel, oxygen and metal to repair the hull. From here, your journey begins every time you start from scratch – the same ship, the same stock, the same entry point.

You fly from star to star, exploring the planets nearby to replenish your meager stock of the said fuel, oxygen and metal supplies. 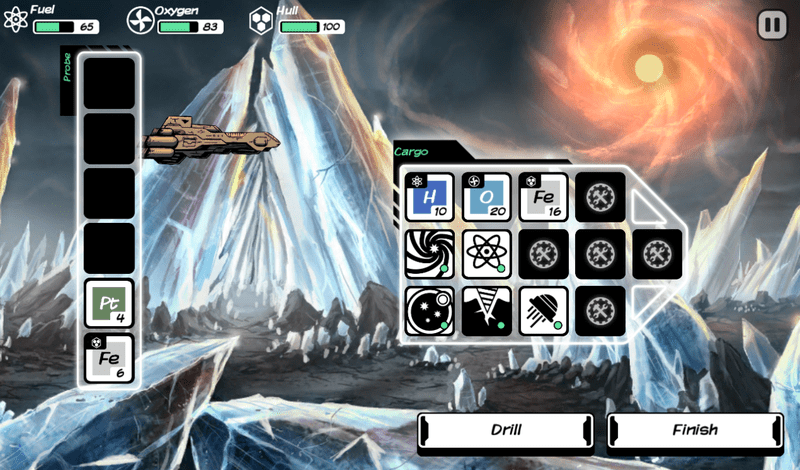 Your ship is rather functional in a way that it can probe and mine for resources, but it’s also limited because it only has a set amount of slots to store the elements you mine and the technologies you build. As a result, the majority of the gameplay is a thoughtful resource management, but there is more to it. So much more.

Besides the supplies, you will come across other elements, which can be used to craft the technologies you learn, and you learn new technologies from the alien races you come across in the vast and endless universe. The nameless astronaut even elaborates on the perks of being a sentient organism – “Back on our poor old rock, Earth, we imagined that intelligent life was a divine scheme… that we were unique… that we had a destiny. And yet I now know that intelligent life is recurrent in the universe. Accidental. Potentially inconsequential. We are not unique, and we have no destiny other than the one we make for ourselves.” 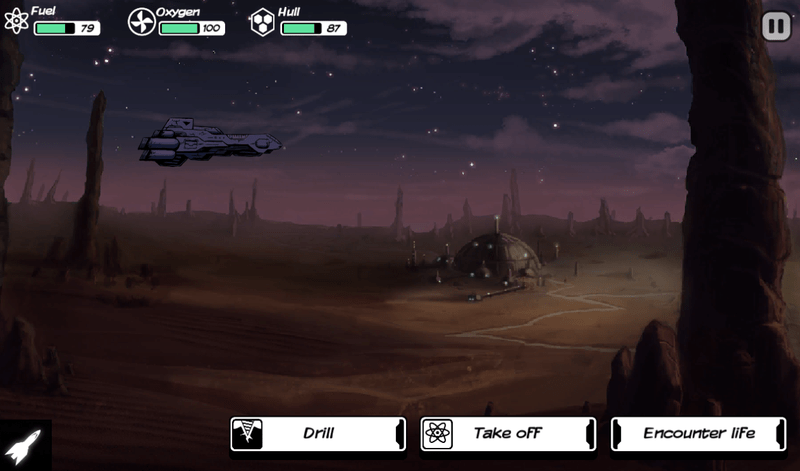 I was afraid of that, but there they are – ancient intelligent civilizations lying in ruins, extinct. You can come across the remnants of these every once in a while in Out There, and your best option is if you find some gizmo or learn a new technology that may help you expand your ship and fly faster or further.

On other occasions, you will meet intelligent life forms and they will speak a language you don’t understand. Step by step you will learn that language, and try to untangle the back story that explains the entire sinister agenda behind your journey.

Besides aliens, you will witness entire civilizations go extinct in space wars or planetary cataclysms, giant and tiny parasites trying to feed on you or your spaceship – well, tons of things actually. The lifelike randomness of the entire experience is horrifying, to say in the least. Needless to say, you will be dying way too often from reasons as dull as lack of oxygen or fuel. On some occasions, a warp “out there” will send you to a star system that is too far away from other stars, except for a Supernova, and you meet your dead end being unable to move anywhere but the bursting star, or die adrift. 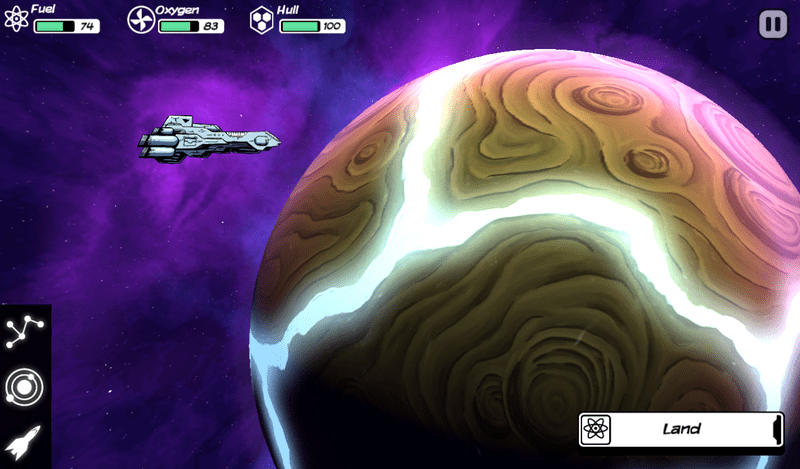 Occasionally, this punishing, painful, agonizingly unforgiving cruelty of the gameplay may get on your nerves. On the flip side, the replay value is enormous since the procedurally generated star maps are always different, so you never have the same walkthrough twice. In my entire year (if not more) with the game, I have never reached the end, and there are three alternative endings. It’s both disheartening and motivating, though. At the same time, Out There is not the kind of game you’d play on a daily basis. At some point, the novelty wears off, but the unfinished affair makes you come back month after month, trying to outwit the heartless random AI. 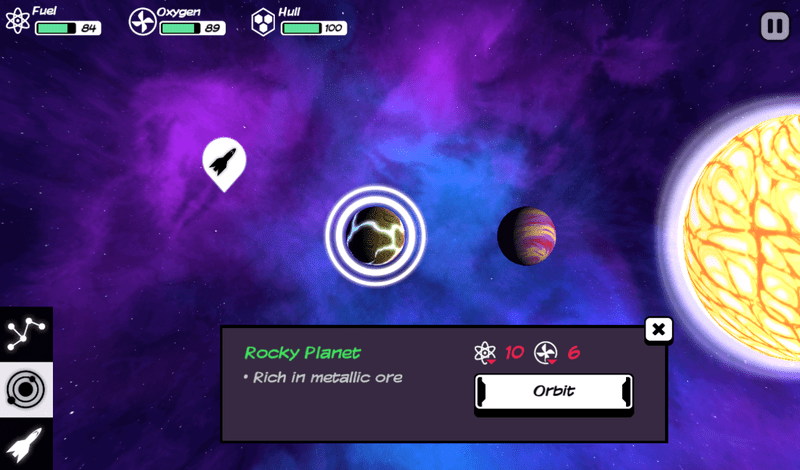 Another special feature of this game, as opposed to many other space survival games, you do not fight here, and the ship does not have weapons, but a few technologies you can learn. On the other hand, you get to learn a few things about terraforming planets. You also have a chance of encountering humans and even saving some of them. Moreover, the game lets you switch ships whenever you encounter an abandoned craft, in which case you can carry some of your resources to your new ship, but you lose all the special tech you have mounted on your ship. 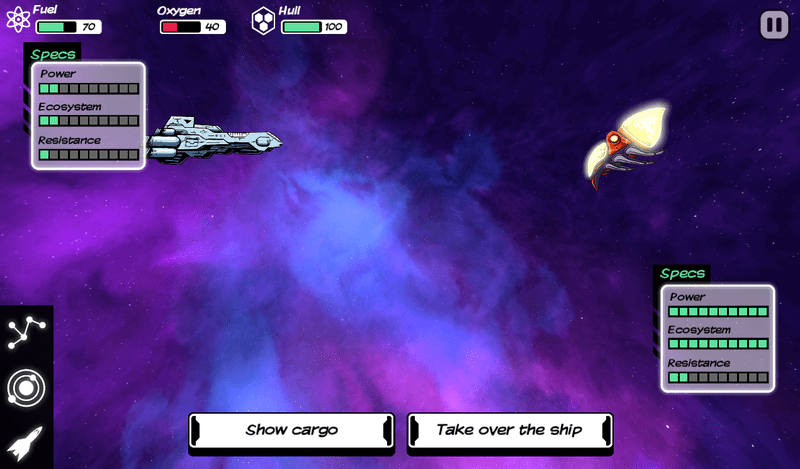 In some cases, the transfer is a disaster, while in others it’s a big step ahead in your abilities. Every decision here matters, as much as your chemistry knowledge. Sometimes, you mine and encounter elements that are other than oxygen, metal and fuel. In this case, you might want to remember which ones you need to craft a new technology you have in mind, because you can’t take them all. Nor can you just switch to your dashboard and check which one was it that you needed to mount that Death Seed without losing the elements you have mined and did not place in stock. Ah well, it’s too late for me to learn Mendeleyev’s table again, so I play by hunch and my poor short-term memory.

Mind this, though. The titular Omega is a technology that lets you restore one of your three main stats – fuel, oxygen, hull. During my first gameplay, I found Omega but ran out of fuel and chose to give up simply because I was careless not to read what Omega does. Ouch. 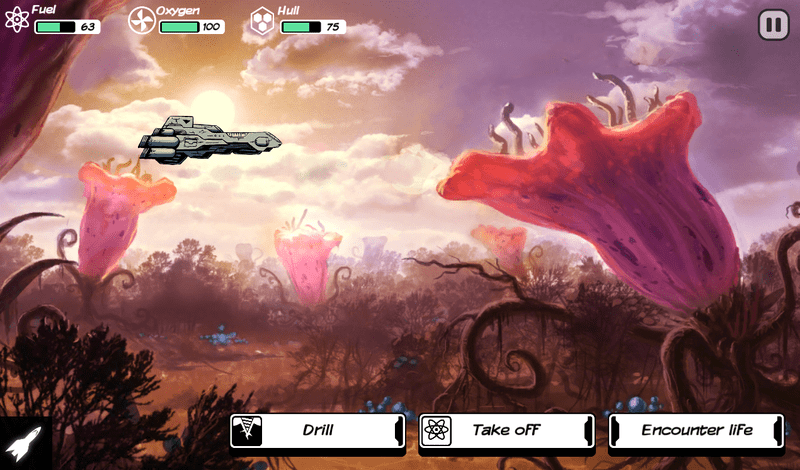 If you have been wondering if the update is worth a go, take a look at the art work. It was amazing in the original game, but Omega edition is spectacularly brilliant and a major improvement to the overall design and feel of the game. The style is still somewhat comic book-like, with short narration pages in between the main gameplay parts, and the concise style of the author adds to the overall depressing loneliness of the journey.

Omega Edition looks dazzling and the significantly updated soundtrack by Siddartha Barnhoom is probably the best one I’ve heard in a mobile game. Its eerie, gentle tunes weave the thin fabric of loneliness in space that borders on madness and oblivion, or suicide. Creepy, yet beautiful.

The overall sound score is minimalist, yet sufficient to know when something goes terribly wrong. 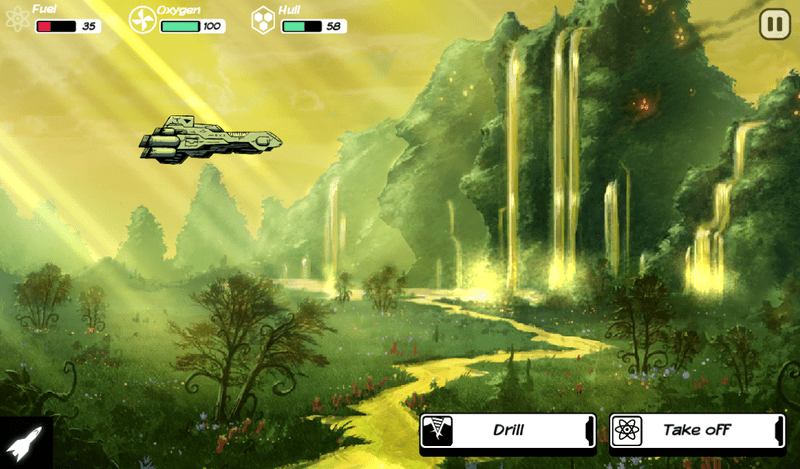 The replay value is still immense, with over 300 multiple choice written encounters, troubles and traps. There are overall 8 spaceships, but you don’t always get a chance to try a new one within the limits of a single gameplay from beginning till death. The game’s random and painful character will make reaching at least one of the three endings a task for the few worthy ones, but not many. It requires persistence, yet it’s addicting, so the moment you think you’re done with it, you know you’ll be trying again tomorrow. Besides, this game’s replay value is fueled by human curiosity, and if you want to know what’s the deal with the endings, you will keep exploring and learning the ins and outs.

Overall, the game is perfect for some 10-20 minute sessions at home or on the go, rather than for thorough two-hour workout, but that can be subjective. 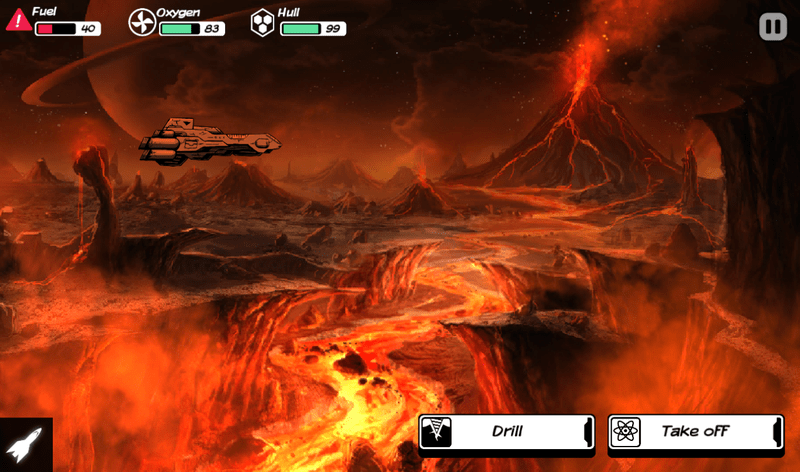 The premium game has no IAPs, and if you have Out There the original game, you can download the DLC for free, but if you are new to it and on the fence about the purchase, I ca not recommend it more to any thoughtful, meticulous fan of sci-fi, horror and space exploration stories. The title is premium totally worth its price with superb production values and immense replayability. 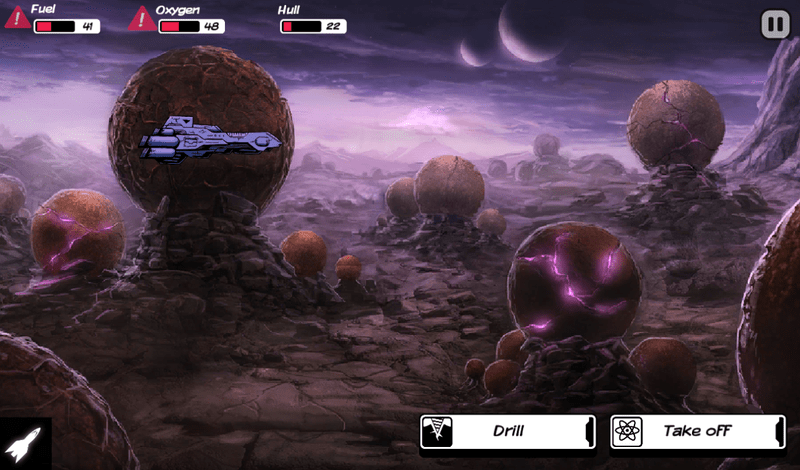 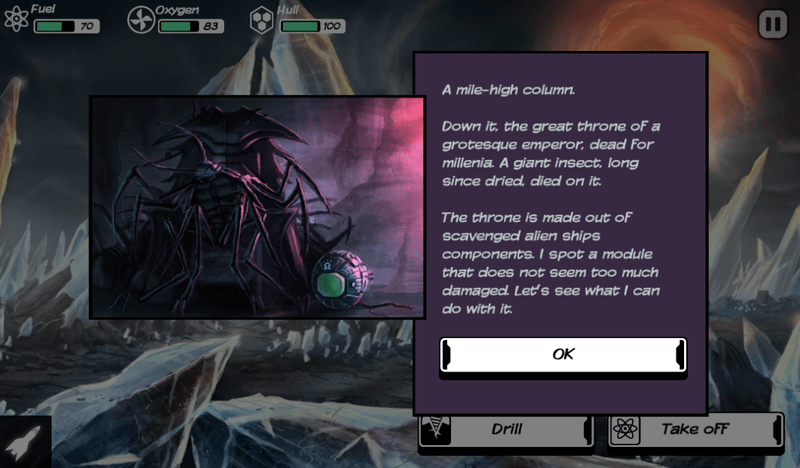 Out There was one of the best mobile sci-fi adventures last year, and Out There Omega Edition excels its original version on a number of points. The situations are more diverse, the visuals are truly dazzling, the soundtrack is extended and evolved beyond my expectations. It is still difficult and unforgiving to the point of playing on your nerves sometimes, but it injects its neon toxin into your blood stream and induces a high level of addiction. We recommend the game to any sci-fi fan of space exploration themes like Star Trek and Space Odyssey or Heavy Metal Thunder and Sol Invictus, but without the fighting and with the focus on graphical content and resource management. Its short narration bubbles add a touch of gamebook adventure genre, without enforcing too much read on the player. In the end, the game is excellent at creating its unique atmosphere – that of screaming loneliness and despair – and it’s something you will never forget. Out There Omega Edition is a game that stays with you for a long while.

How to Install Custom Fonts on iPhone

[Tips] See Who Is Connected To Your WiFi

How To: Properly Read and Write Reviews For Apps & Games