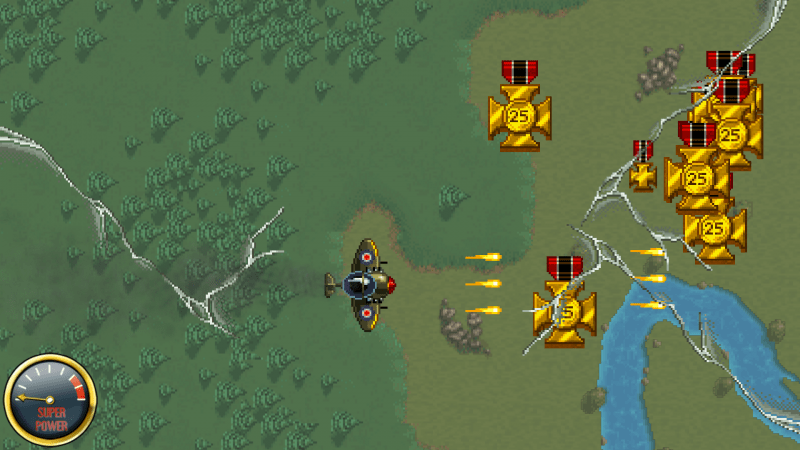 There’s quite a few action packed side scrolling plane shooters on the mobile market, and to be honest the majority of them are pretty generic. Personally, I used to love playing the game 1942 when I was growing up, so I’ve been a huge fan of these types of games for a long time. I’m always excited to try out different variations of a genre I enjoy, so Aces of the Luftwaffe was a game I wanted to dive right into. Find out if this game offers any innovation to the plane shooter genre below!

Aces of the Luftwaffe nails the traditional animations and feel of a classic plane shooter, and the game runs pretty flawlessly (I was playing on a Galaxy S4), overall I was pretty pleased with the in-game graphics. However, the menus and interface could use some work, they just look a bit too retro. There’s five different levels to play through, and the scenery does change but sometimes not all that much compared to previous levels. Regardless of all that, every level still guarantees some awesome explosions and cool plane animations, as well as smooth firing from enemies and players. 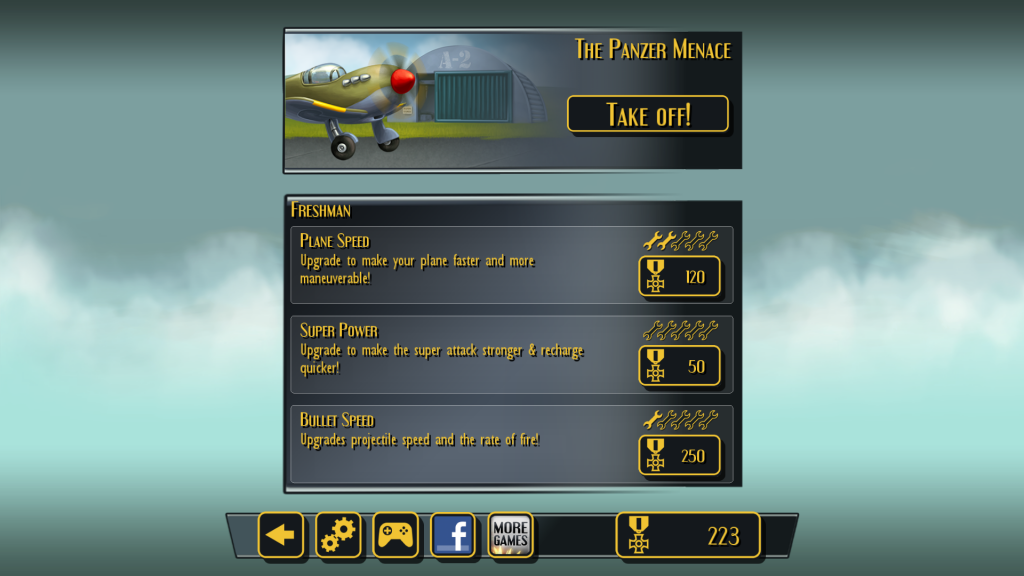 Things do get very intense, and when they do the game handles itself nicely, I never ran into frame rate issues or choppy sequences. Despite how well the game plays, it still left me wanting more, at least in regards to graphics. I feel like I’ve seen many games that look a lot like this, and granted it plays a lot smoother than most games, that still doesn’t warrant more than a 3 in this category. I also can’t go without mentioning the extremely annoying advertisement that sits on top of the screen throughout the entire game, blocking your view — this needs to be removed because nobody would even be paying attention to it while focusing on the game.

I’ve already mentioned how smoothly this game runs from a graphical standpoint, and that is extremely vital to the gameplay as well, especially with a game like Aces of the Luftwaffe. When you’re trying to fly a plane and dodge oncoming bullets and missiles, it’s important that your plane actually responds to your commands immediately, and that you don’t get a hiccup where the screen freezes – even for a split second – and you take un-necessary damage. Luckily it’s not too big of a deal if you take one hit on accident, you can actually take quite a few before your plane goes down — there’s also repair boxes you can pickup if another plane drops it.

The controls are very simple, by default your plane will move wherever your finger is on the screen, and it will fire whenever your finger is on the screen. Personally, I’d recommend switching this to the free-aim via the options, especially if you’re having problems with the default controls. My finger would often get in the way of my view of oncoming planes when I was using the default settings, but making the switch, and then using the right-hand side of my screen to move my plan was much better. The only other thing you need to keep an eye on, is the Super Power meter in the bottom-left corner of the screen, once this gauge is full you can unleash a wave of planes to damage all enemies on the screen. 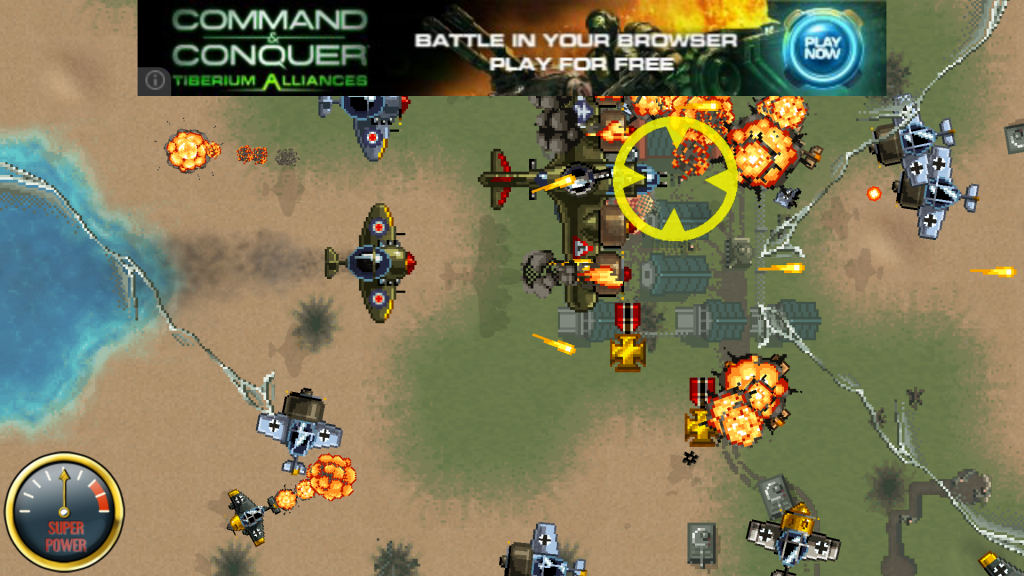 Explosions are one of my favorite things

Throughout the missions there will be various power-ups and other supply boxes that you can pick up from taking down other enemy planes, the weapon power-ups expire at the end of the level, but stack on top of each other. By the end of a mission, you can be pumping out some serious firepower, and even from multiple planes. Some of the later missions involve tons of enemy planes on screen at one time, and when you have tons of power-ups it turns into a massive fire battle — it gets really intense, and it’s a lot of fun.

Basically this is a lot like an arcade game, it’s really fun to play, even for hours sometimes, but you’re not going to be able to sit and play it for days. Aces of the Luftwaffe definitely remains un-stale a lot longer than some other games, and it’s usually pretty inviting if you haven’t played it in a while. There’s also the incentive to upgrade your plane, unlock new pilots, and also unlock new levels, but as of right now there’s only 3 pilots, 3 skills, and 5 levels — leaving much to be desired. 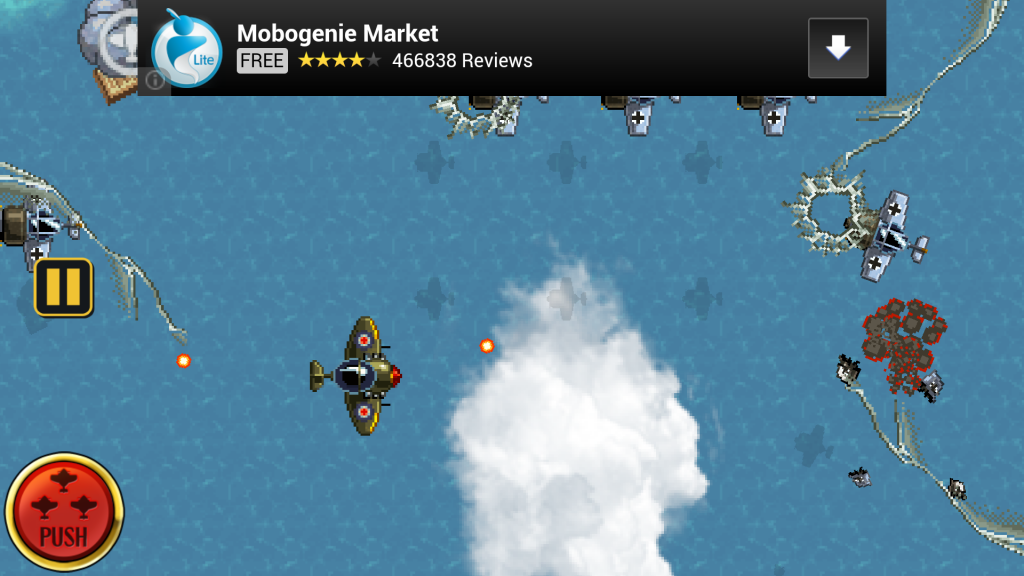 You do need to earn a pretty big amount of credits in order to unlock everything the game has to offer, but it doesn’t change the fact that there just isn’t a whole lot of variety. When you have nothing to choose from, it makes your purchases feel less important, you’re just unlocking content in a linear path rather than choosing where you want to go next. I should mention that each level has four sub-missions, three regular and one boss fight, but the maps don’t really differ too much. Even so, Aces of the Luftwaffe can get by on it’s intense gameplay without having to rely to heavily on post-game purchases and upgrades.

With one major update, Aces of the Luftwaffe could transform itself from really fun arcade shooter, to really fun complete package game for iOS/Android. It honestly just feels like half of a game, even though it’s lengthy to unlock everything, that’s only because things are stretched out a bit further than they should be. Adding five more levels, and two or three more plane upgrades, would be perfect — I think three pilots is plenty, maybe one more just for the sake of adding something to each aspect of the game. 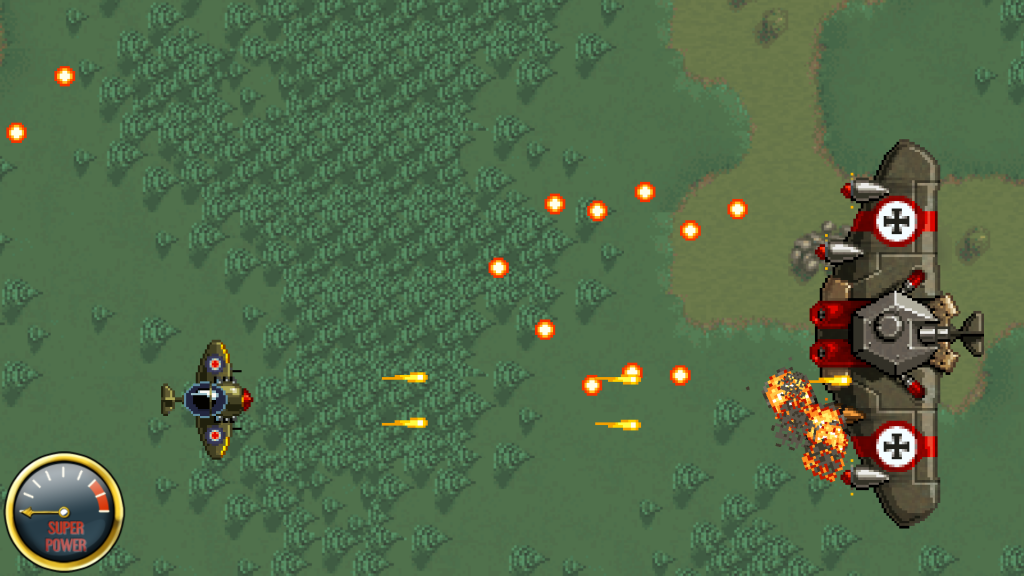 My bout with the first boss, I came out victorious

The menu screen has a tab for people who are looking for more, and it promises that the developers are working on adding more updates to the game. Only time will tell, but things are looking pretty good for Aces of the Luftwaffe, and I’m excited to see what the future has in store.

Very good, Aces of the Luftwaffe was really an enjoyable experience, there were really intense battles near the end of some missions, and seeing how many upgrades I could stack on in one mission was always a fun challenge. Some more content would be appreciated, but there’s definitely enough to get a few hours of enjoyment out of, and it looks promising in regards to future updates for the game. Check this game out if you’re bored and looking for something fun to play on your phone or tablet. 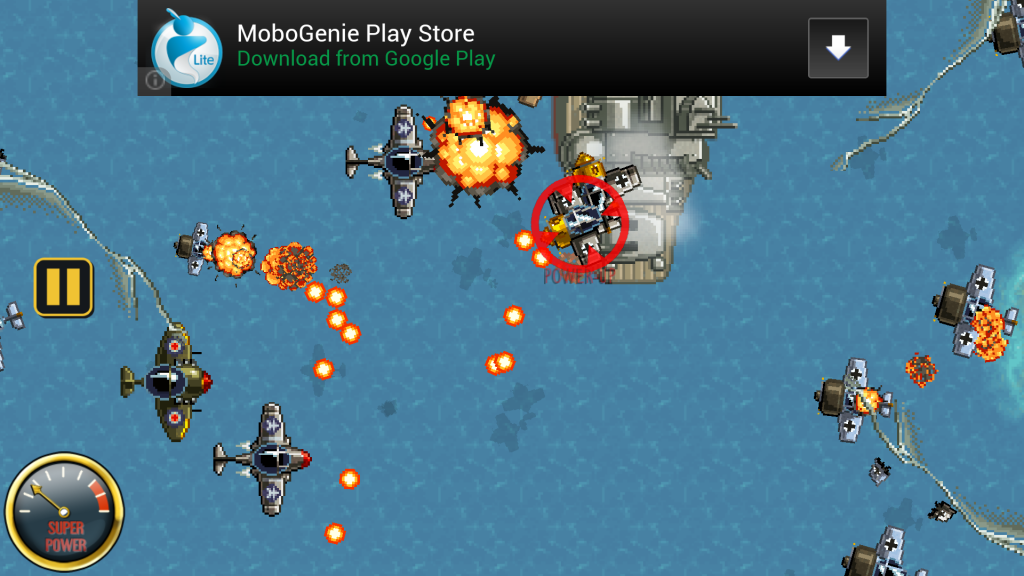 Click here to see Aces of the Luftwaffe on the Google Play Store (Android).

Click here to see Aces of the Luftwaffe on the Apple App Store.

Have you played this game yet? Do you agree with the review? Post your questions and comments below!