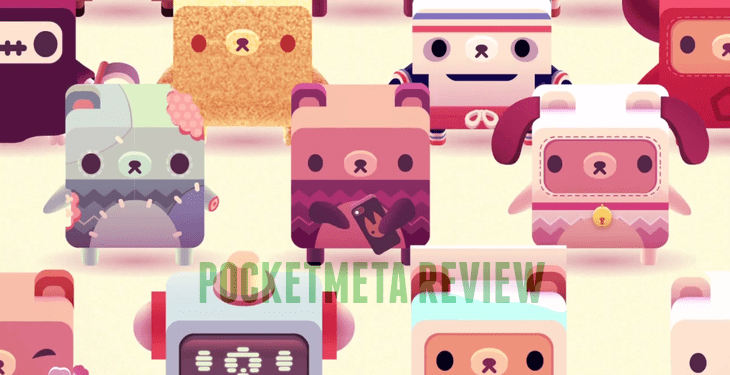 I dislike ice-cream from the supermarket buckets (forgive me, Ben and Jerry’s). My favorite is a self-serve frozen yogurt at Yogurtini, and I like it with a tiny drop of the said frozen yogurt and a hefty load of hand-picked goodies on top of it. And bears, lots of gummy bears. They’re not as good when you eat them from a plastic bag, but come as a prize when mixed with other fruit and candy in an ice-cream. And when I add two, better three spoonfuls of those, each take on that yogurt ice-cream has one gummy bear, and every spoon is a prize.

That and my fancy for puzzles did the trick and got me neck-deep into Alphabear, in addition to the grand job the developers did with this game, of course. It’s a delightfully positive game that works on several areas of my brain at the same time – the ones responsible for language, associations, food and pleasure. I make words, giggle at the humorous selfies the bears make after each round, marvel at the visual polish of the app and eat gummy bears, thinking about how neat it would be if Yogurtini moved their shop a few blocks closer, so that I could walk there every day. 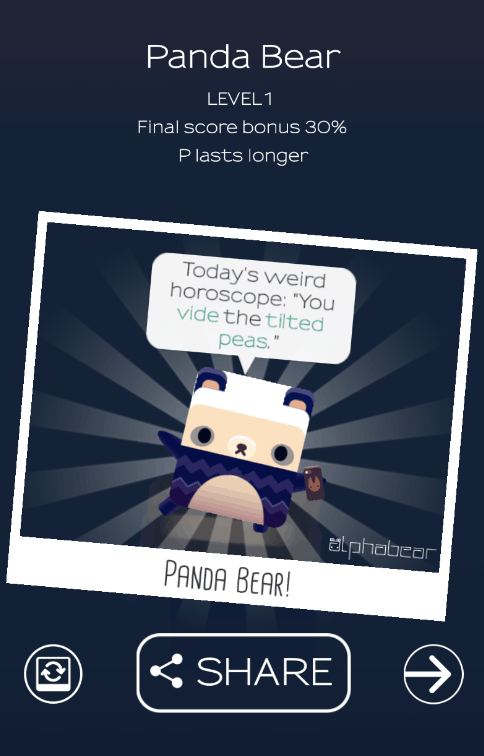 Alphabear is a word puzzler that sees you making legit words from the letters scattered over the grid. When you use letters that are adjacent to one another, a teddy bear appears on that place on the grid. Each letter has a number on it – use it, and the number is added to the word score, but leave it and it will lose one point. Whenever the number on a letter reaches zero, it turns into stone, and you get an obstacle on the grid that prevents your teddy bears from growing. Every time you make a word, the bears on your grid grow. They’re somewhat rectangular, but it doesn’t make them any less cute, and when you clear all the letters on a grid they grow really funny. 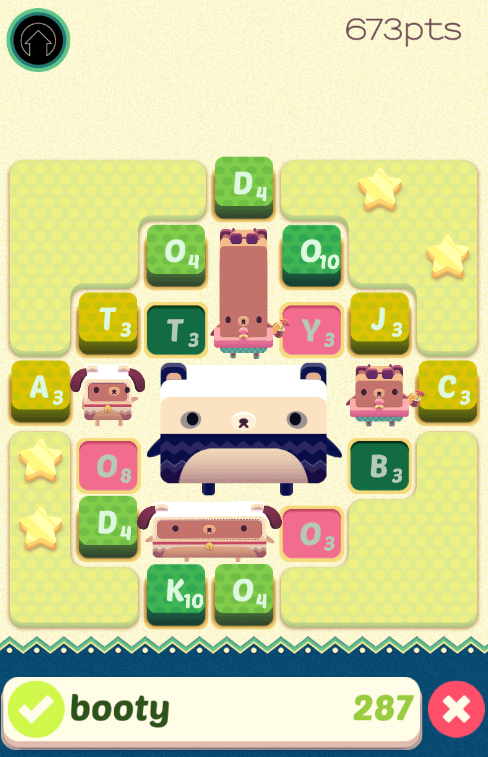 Each level has a target – a set number of points you need to score to unlock a new bear to add to your collection. As you would expect, they come in rare and common types and have their special abilities. These teddy bears are the power-ups you can use in the gameplay, and they will give you a set percentage of extra points after each round and a few other bear-specific goodies, like extend the timer, increase or decrease the frequency with which some letters appear on the grid and the like. 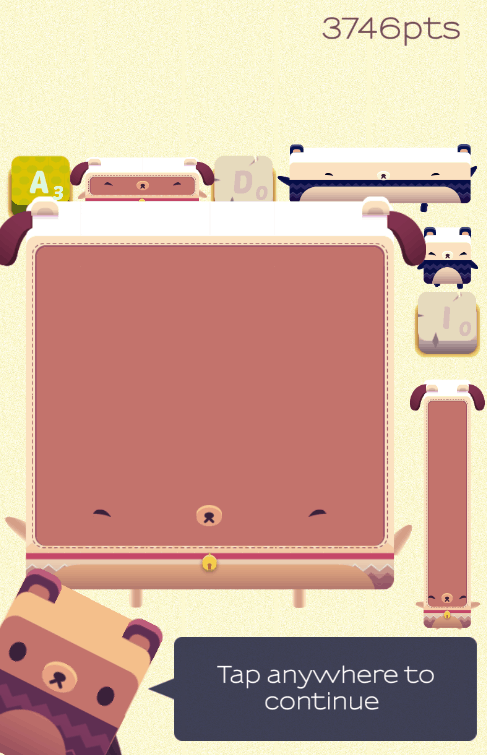 You can use several bears in each stage, but they have the energy bar, so some rare bears get tired after one round and need to sleep for about 15 minutes. The common bears seem more energetic, while the legendary bears need 24 hours to regenerate. There are 67 bears in total, and any player with a knack on collectibles will want them all.

You enter a level by paying in honey, and once you run out of its stock, you will either have to wait for it to refill in a natural way, or pay $4.99 for a bucket of the infinite honey. A disclaimer: if you are an addictive personality, pay the $5 and don’t torture yourself trying to stick to the budget – the game is insanely addicting.

Some levels are time-based, others have specific requirements, fulfilling which will give you extra points, like making long words. Each level pack is finalized with a boss level, with a very scary teddy bear guarding it. Then, there are daily big board rounds and treasure hunts – you pay to enter those in coins. 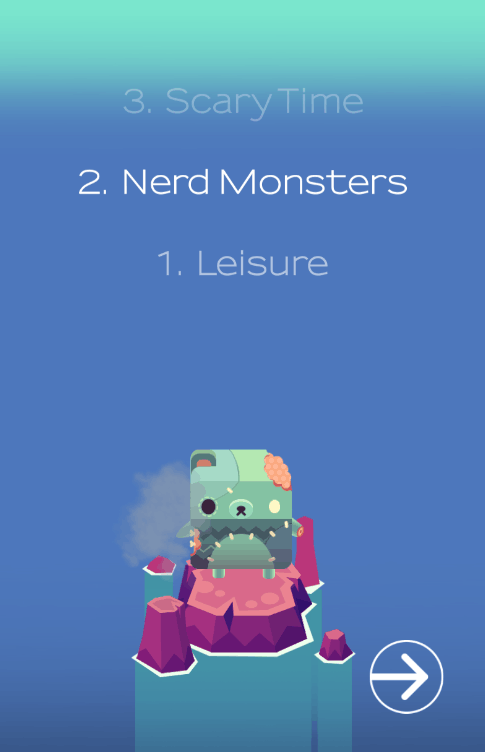 Needless to say Alphabear is a charmer. It looks as if Threes had a baby with Monument Valley – the color palette, the soft, rounded edges, the backgrounds – everything looks posh and cute at the same time. And then, there are the bears. Instead of walking down the safe road of making Iron Man and Hulk bears, the developer created their selection of characters, which are unique, beautiful, funny and possess a wagon-full of personality each.

At the end of each stage and when you reach the target, you unlock a new bear and it takes a selfie with a funny title, using some of the words you made during the stage. The result is sometimes funny gibberish, but most times quite legit jokes.

The music is appropriate – neither distracting, nor annoying, but quite relaxing and fitting the overall style of the game.

Alphabear is quite accessible, yet basic literacy is required to play. I wonder how far can I get using two and three-letter words only, like eh, doh and hi? It’s not intimidating, however.

The replay value is good if you like the word puzzlers, but the thing that surprised me is you can’t replay the chapters you’ve already cleared. The options to share your results on the social networks and compete with others will appeal to the competitive players.

On the flip side, there is no way to create at least two separate accounts on the same device, so that several people in the household would not have to share the collected bears.

One more (in-)significant downside is you can’t play Alphabear without the Internet connection. Alas, this would have been a perfect on-the-go brain teaser. 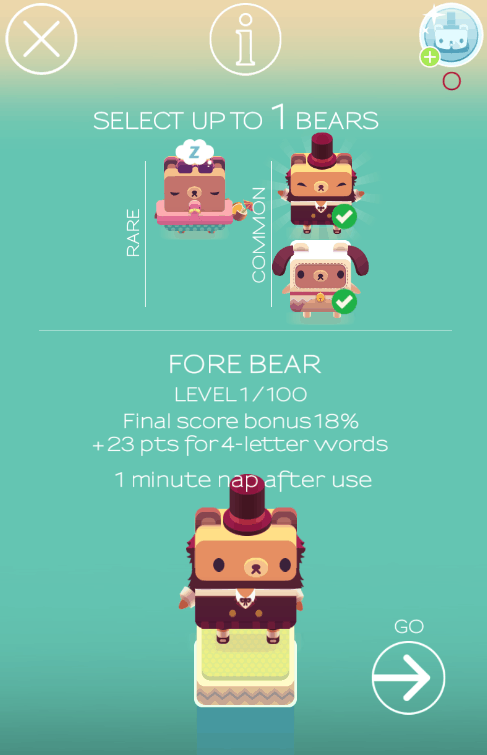 I believe Alphabear is just in its IAP system. You can wait for the honey to refill by being useful and doing some work in between the play sessions, or you can buy some honey to play until you see bears when you close your eyes at night. I like to limit my gameplay and keep the novelty sharp, though, because my girlfriend says too much gummy bears aren’t good for my stomach, and I don’t like playing without them.

$4.99 buy you the Infinite Honey, which means you can play all you want, but the bears still have the cool down timers. The coins are the entry fee for the treasure hunt boards, and you earn coins by playing the regular boards. The honey regenerates over time till the maximum of 120, and each match bites off that pot some 50 honey-s. Once in a while, you can watch a video ad to get 50 free honey. However, this game is totally deserving the $5 to support the developer. 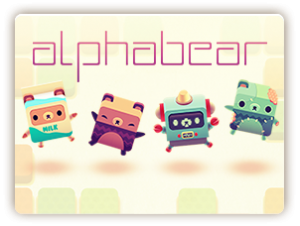 Alphabear is an accessible, refreshing, non-demanding word puzzler for all the genre aficionados, from beginners to word nerds. Its polished lovely visual style works magic on your senses, getting you enamored from the first stage you beat, and if you appreciate the genuine fun and quality of the final product, you might as well buy the unlimited gameplay to support the devs. Even in its energy-restrictive form, Alphabears is a good deal.