Angel Stone has been making quite a lot of buzz in the media upon its launch, and given the good looks of this third-person dungeon crawler, we thought reviewing it would be fun.

Being quite a traditional hack and slash RPG, Angel Stone has its strong and weak points, and depending on your level of savvy with this genre you might see just another typical game among the multitude of the look alike titles, or you might discover there is a lot to do here.

The core of the gameplay sees you directing a warrior hacking and slashing his or her way through the waves of fantasy slime, like zombies, some sort of aggressive snails and others that I find difficult to memorize the names of. 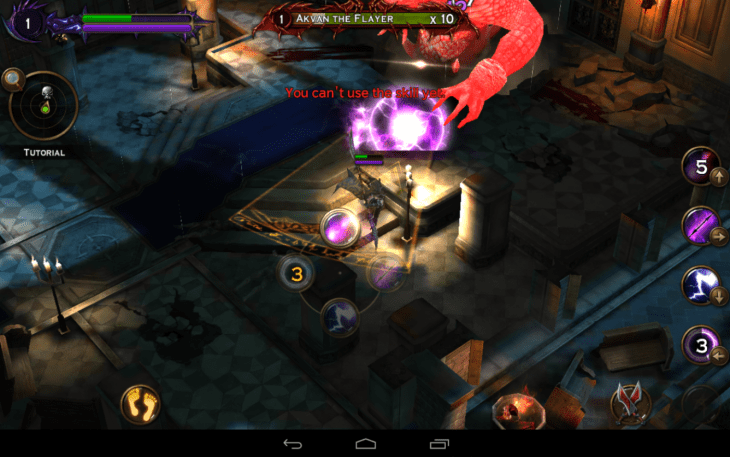 There is a small footprints button at the bottom left corner of the action window – it’s the auto-attack and auto-move, so when it’s Off you have all the control to move and attack, but it’s On by default, so your hero moves automatically to the nearest bunch of enemies.

Each stage is divided into several Acts, with each act having a few replay options depending on which route you take. Some routes have cash, some have armor, but you can’t tale all the routes at once unless you clear a previous level with an S rank, in which case you can tap Blitz and skip the fighting, harvesting the loot. 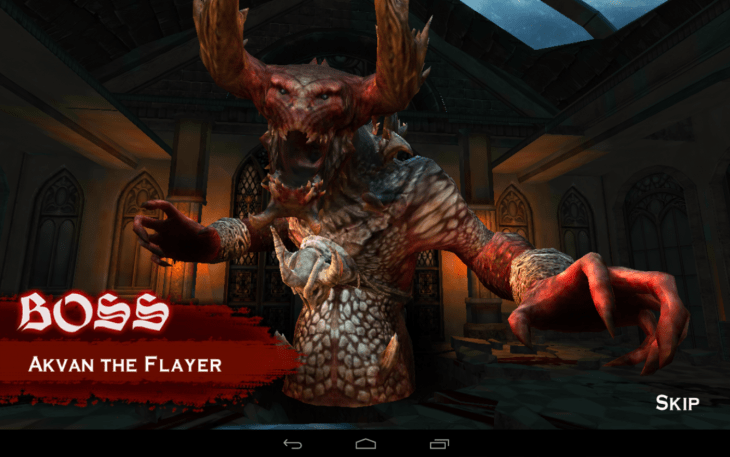 Angel Stone has three hero classes to choose from – Berserker, Gunslinger and Mage. Each can be male or female. Notably, you can play all of them – just tap on the hero, add a slot and choose a new hero. Your heroes share the bank and in-game currency, but you will have to level them up on a standalone basis, of course.

While Berserker and Mage look quite at home in this dark fantasy environment full of the undead and all sorts of devilish creatures, Gunslinger adds a little steampunk-ish flair to the gameplay, so I strongly suggest you try out all of the heroes instead of investing all your time and in-game money in just one.

It’s the usual tale – fight in the levels, or acts, harvest loot and come home to review if it can be of any use. Sometimes I wonder why would developers add such boring junk as broken pottery in their games. Moreover, I wonder why a mage, gunslinger or berserker, as cool as they are, would care to collect that garbage. Alas, that question has remained rhetoric for the past decade now.

Fortunately, there can be some useful stuff among the bits and pieces of garbage. Some items are rare and can’t be quipped until you level up; other items can be used right away while the rest can be sold or dismantled. The ore you get for dismantling items can be used to upgrade your ammo. 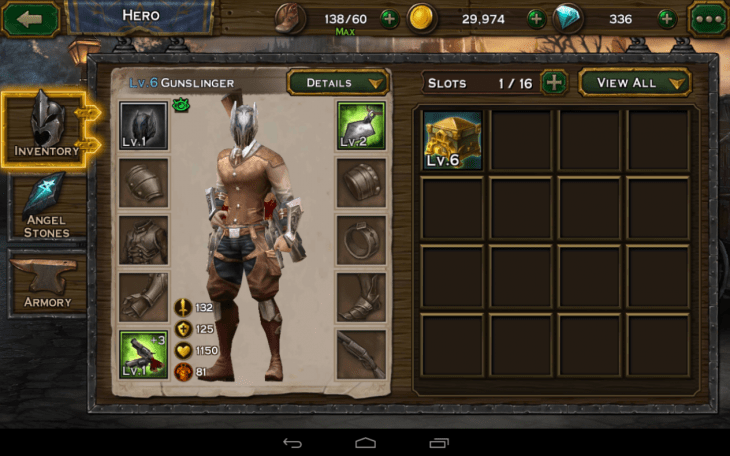 Then, there are stones, which stand for special skills of your hero. The skills are of active, passive and summon type. These are upgradeable, too, and leveling them up constitutes a hefty deal of the gameplay, like it or not.

I would not say the UI is overwhelming for an average player, while the hardcore RPG gamers will feel there could be a more complex crafting and skill tree. On the flip side, the game needs a bit tweaking on the accessibility side because in most cases it feels like the game is forcing you to go through too many windows, and tap twice as many times as it should be necessary. Say, you receive a reward for completing a quest, or some log-in bonus – not only do you have to claim the reward in the collective Quest or Bonus tab, but also go to the Inbox to collect it. This feels like walking in circles – too many taps to collect a reward. In a perfect case, it all should pile up automatically with a few in-game notifications. 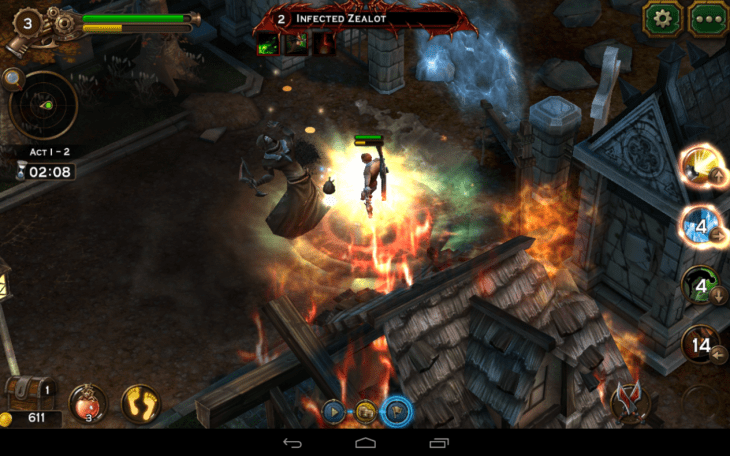 The same is true about the Hero UI and the upgrades. On the one hand, the players who have advanced up to level 34-40 say there is no need to upgrade all your hero’s special skills, but to concentrate on a few critical ones. This will enable you to go freely without experiencing in-game currency shortage. On the other hand, upgrading each skill requires too much tapping, and it gets oh-so-boring by the time you reach level 7, or sooner.

Finalizing the UI wrap up, it’s intuitive despite being a bit cluttered. 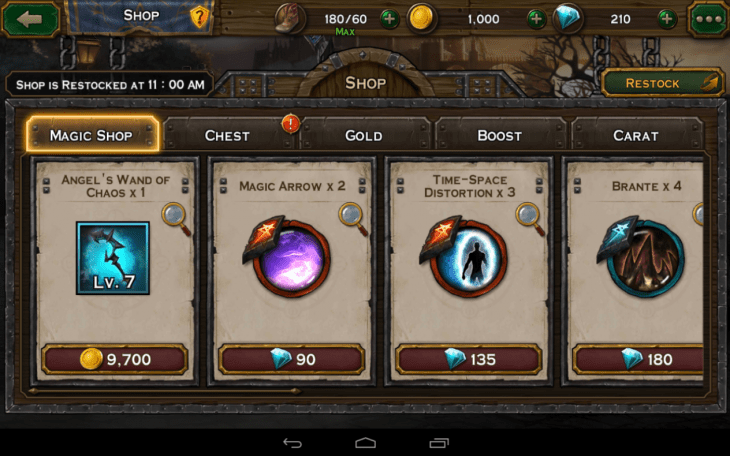 If the gameplay is too traditional to bring something new to the table, if the skill and ammo tree is quite simplistic for a hardcore RPG fan, the design of Angel Stone is downright awesome, and the looks alone make it a worthwhile download. The epic-like music may become a nag by minute 20 of your first gameplay, but the visuals are superb.

The cinematic trailer of Angel Stone caused a lot of controversy, luring many curious players into trying it, but you should not confuse a gameplay trailer with a cinematic one, but there is one thing that the latter renders truthfully about the game – the female characters look… impressive.

The same is true about the gameplay visuals – the spectacular explosions and attack effects make it an eye candy while the characters actually wear the gear you choose. Overall, the game looks too good for a free-to-play title.

My only woe is – where is that blonde Gunslinger from the cinematic trailer?! 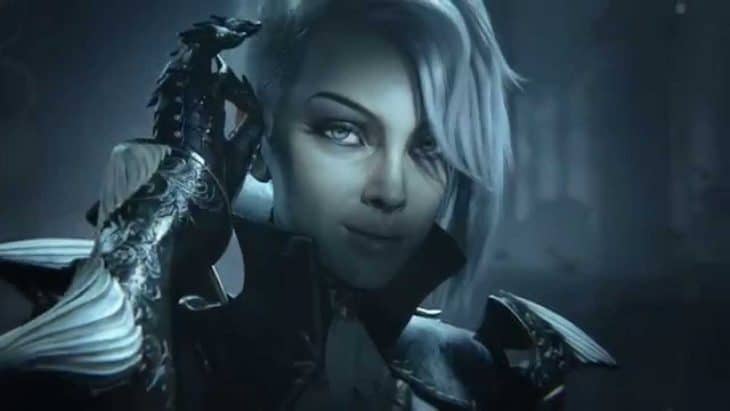 The initial village might be quite misleading about the game’s difficulty curve, especially with the auto-attack option enabled. You just sit and watch your hero do the job, occasionally tapping on the special skills buttons on the right side. The game also reads swipe gestures as such that trigger special skills, and by swiping in the enemy direction you trigger a special attack on them. During the initial acts, the auto-attack feature is nice and quite relaxing, which might give you a yawn or two.

However, by stage three the difficulty ramps up, and you are strongly advised to partake more in the action. Disable the auto-attack and move manually, attacking the enemy as you see fit. Sometimes, you would have to do some jumping around to corner a hoard of the slobbery bugs, but the action gets so much more intense and difficult than during the initial stages. In fact, if you stay with the game long enough to get to at least stage 3, you might discover it has more depth to it than it initially seemed.

For examples, the monsters will become stronger and spit acid and fire at you, the bosses will throw powerful attacks you would not be able to withstand, so some grinding ensues to beef up your stats. 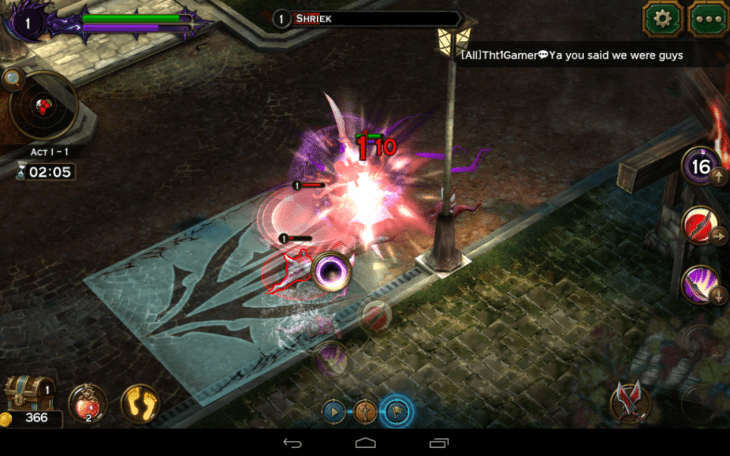 I honestly don’t know if there is an end to the story, or if the game is an endless level-up tale. Provided you can start several gameplay instances with heroes of different class and gender, you can compare different play styles. Despite the levels and areas being the same for all the 6 of them, their weapons and skills affect the outcome. With the dozen of stages, each consisting of multiple acts, each of which in turn consist of several routes, plus unlockable extra areas for training – there is a lot of content here. Grinding the same acts for more loot and XP can become tedious, though, so Blitz-ing a route after scoring an S rating in the previous run is a welcome relief. 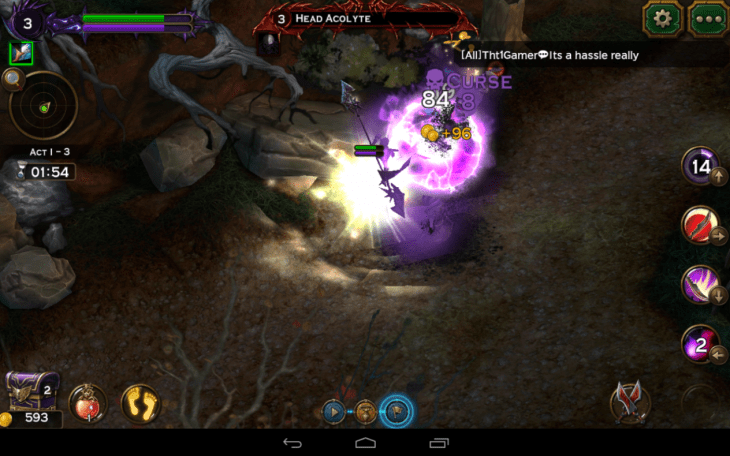 I have not found reports about a paywall so far, nor have I reached it myself, but considering the game is quite fresh we might reconsider this point. However, as of now the game is quite generous with the in-game currencies, which are – gold, stamina, gems, ore.

Gold is used to buy upgrades and level up; stamina – to enter battles; gems buy you whichever of the two; ore lets you enhance your existing ammo. I managed to find a report of a 34-level player who says there is a paywall at these heights, indeed, but I can’t confirm that based on my own experience. The truth is, if you manage to get that far, it might be a good idea to reward the developer. After all, the game is pretty good. 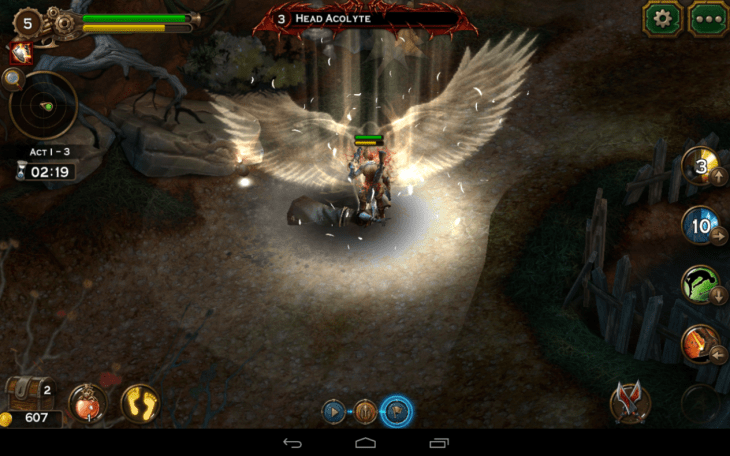 Finally, I may suggest a remedy to running out of gold woes. The game is generous on gold, and it allows grinding. The major expense part is leveling up, where most players spend their bank on special skills stones because they think they need to have all the stones upgraded. This is not entirely true, and all you need is to figure out which stone is critical for you, and upgrade it consistently. So, proper skill selection and upgrade will get you further in the game than reckless upgrade-it-all tactic. This tip should let you get by without paying at all.

And don’t forget to collect those achievements and log-in bonuses, or trade gems for gold and sell useless stuff from your ammo section. 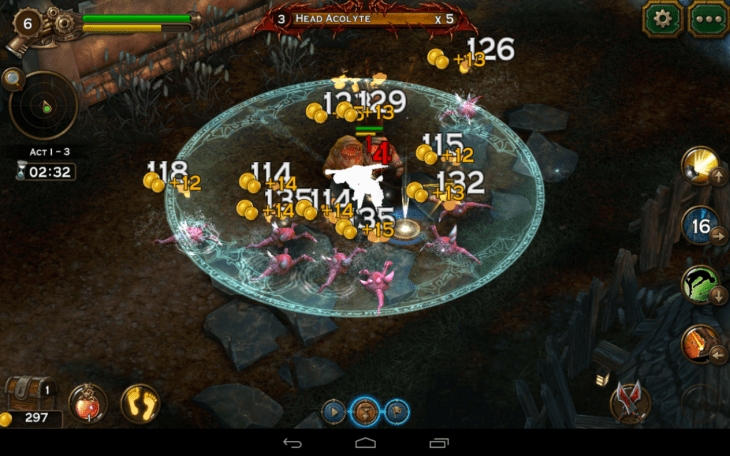 I have not had any performance issues whatsoever, but there are a lot of woes both on iTunes and Google Play about the crashes, connection failures and framerate issues on older devices. My guess is the game needs some good real estate and RAM to run smooth, so hopefully the developer team can sort out a patch for these issues that seem to affect the ratings quite unfavorably. 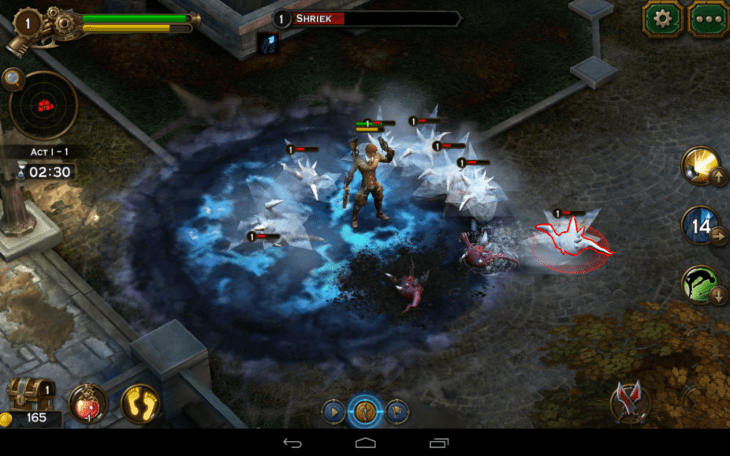 Angel Stone might not possess the complexity, depth or novelty the hardcore RPG fans crave, but it definitely deserves a try due to a set of reasons. One is the gorgeous looks; two is the possibility to turn off the auto-run and auto-attack and be your own boss for strategy and skill selection. Three is a permissive free-to-play model that showers gold and gems – you just have to pick them up. Four is the increasing difficulty you won’t find in the initial levels, but it will surely make you grind and prioritize your skills in the longer run. Five is the moderate, yet persistent addiction factor. And even though you might not say this is the game of the year, Angel Stone is by far more than you could expect from a free-to-play title. 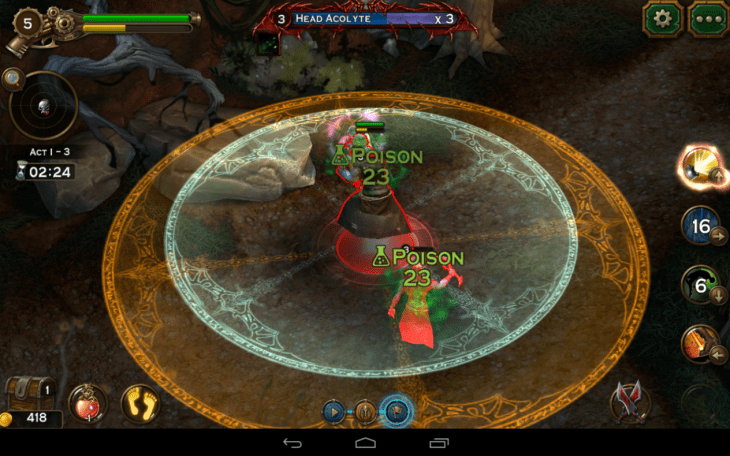