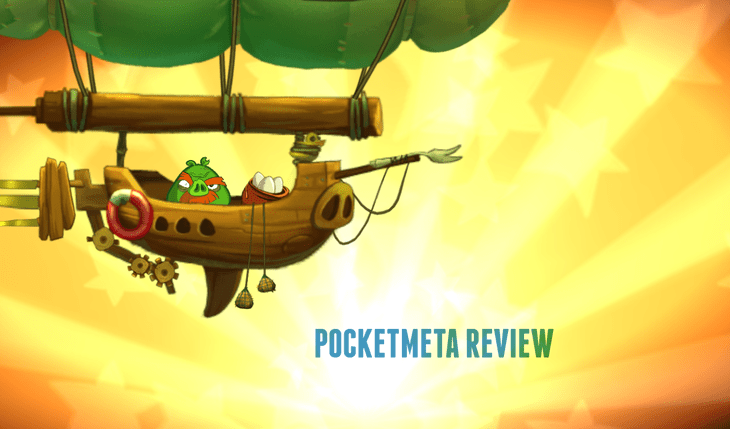 Thank the Canadians for the life system in Angry Birds 2 because Rovio’s general manager Oskar Burman said in an interview to Pocket Gamer, quote:

When asked whether the energy mechanic might alienate some players, Burman was optimistic.

“The users liked this implementation in soft launch,” he said, referring to the Angry Birds: Under Pigstruction game released in Canada.

Now you know – don’t let them Canadians test the games… they call it the Canadian devil for a reason in South Park.

Just joking, we all know Rovio’s style far too well to blame the good people of Canada for the 5 lives in AB 2.

Many of you, us, have come all the way across all the spectrum of emotions with Rovio’s games – from love and addiction with the Angry Birds and their subsequent iterations, to the adorable Bad Piggies, quite fun yet stingy AB GO, to mediocre AB Transformers and way down to loathing the utterly bad AB Fight. With the flop that the latter was, we did not expect anything from Angry Birds 2. Sometimes, having no expectations saves the day because the game turned out pretty good. Not perfect, but a worthy Angry Birds sequel. 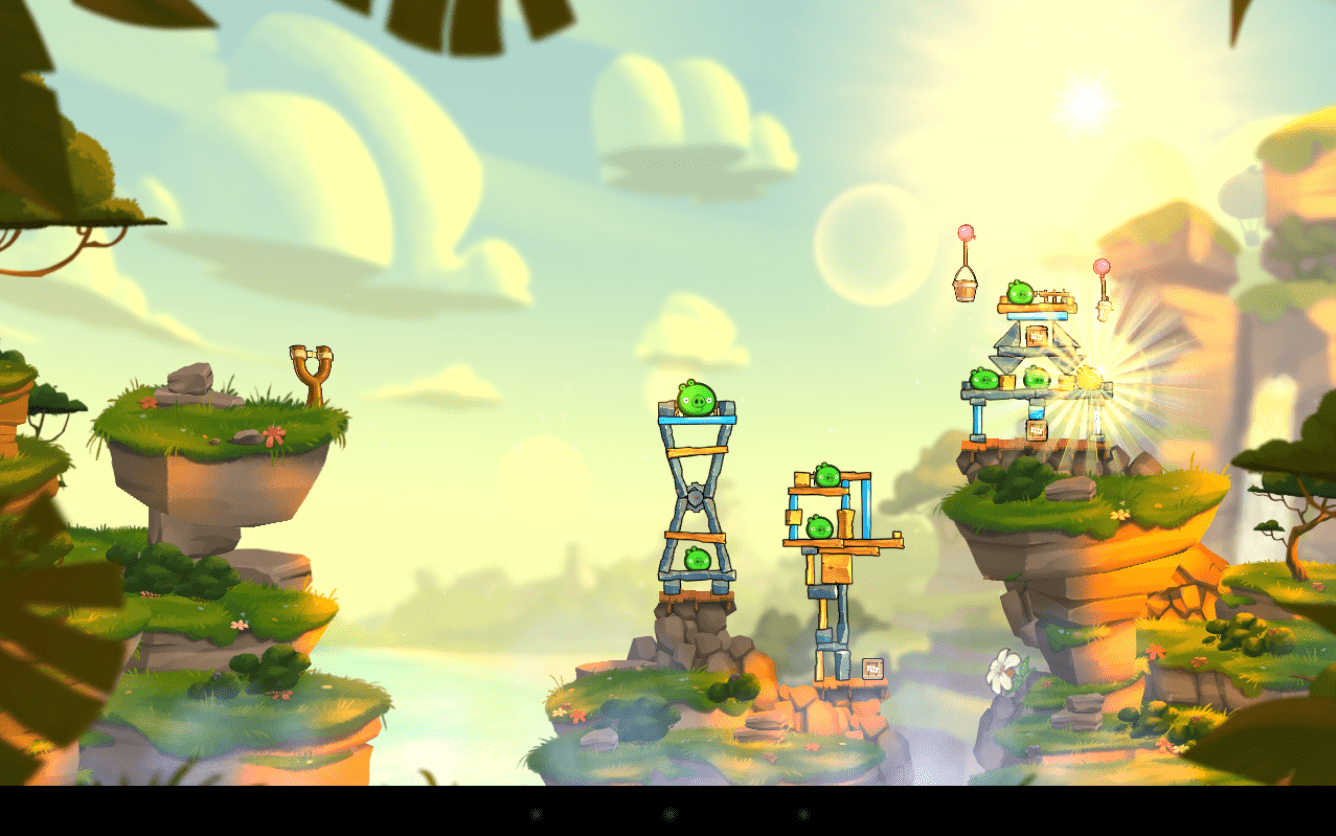 The birds and pigs are still at war, and you still use the slingshot to bring the green bastards to demise. However, levels in Angry Birds as we know them are no more. Rovio has reinvented the entire system top to bottom, and there are good and bad things about the new world of AB.

Now, a level consists of “rooms,” so to beat a level you need to clear two or three rooms, which correspond to full levels in the original Angry Birds game.

Next, you now have a random set of cards for the birds you have unlocked thus far in the game, and that set is one for the entire two or three rooms per level. There is a ”New Card” meter at the top right corner, which counts some mysterious points until the next extra card you are entitled to, so when it fills up, the game gives you one extra card to clear the stage. 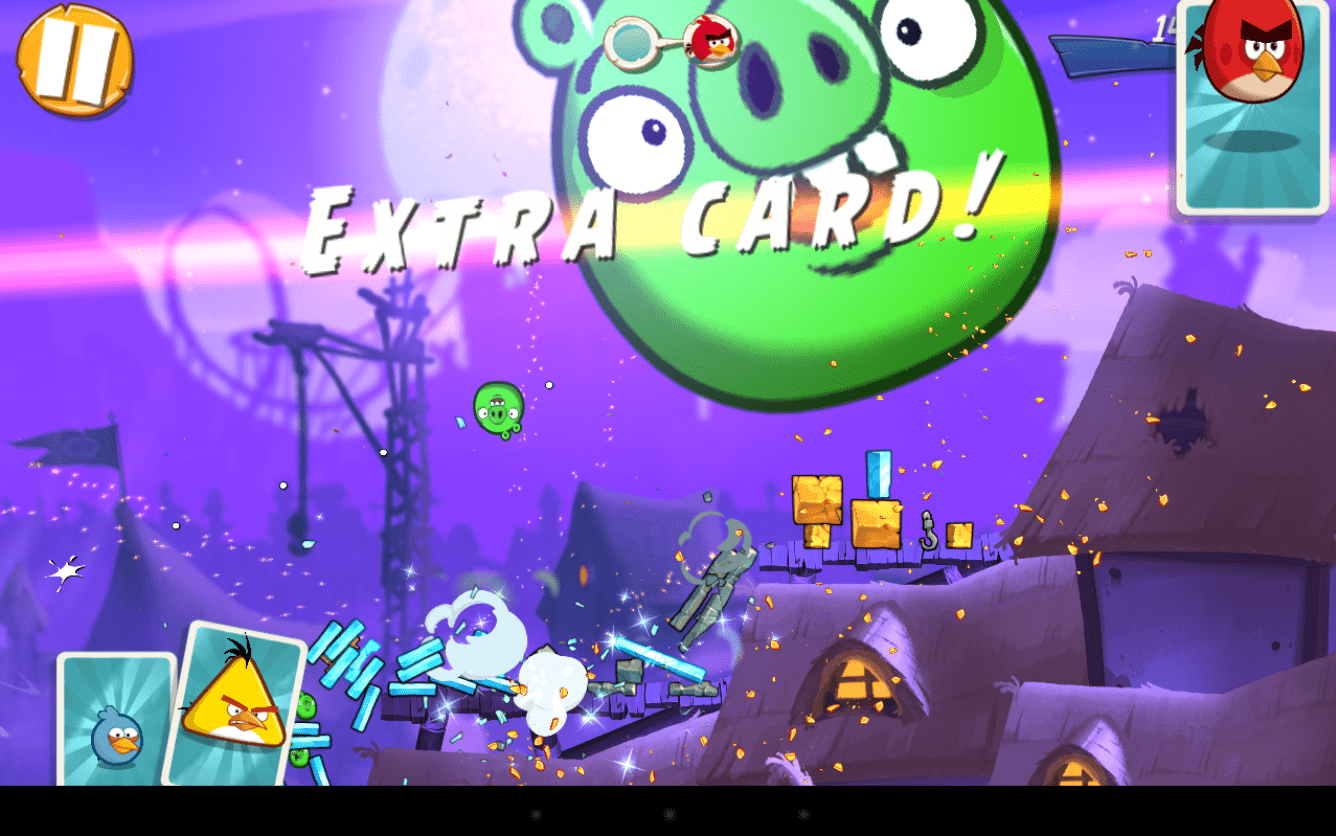 Next novelty is the life system – ta-da-da-daaam. My colleague Alexandra dubbed it “Candy Crush Saga-like” and she is spot-on. You have 5 lives, and when you fail at a level, you can watch an ad to get an extra birdie and see if you can make do with it, but when that option is exhausted – face the failure and lose a life. The Retry button in Angry Birds that you were so used to hitting whenever you felt you messed up the very first hit is no more of use. Forget about it altogether because you lose a life when you retry. What happens when you lose all 5 lives is disheartening – 30 minutes to replenish one life. That is, to get your full stock of 5 lives you need to wait for 2 hours and 30 minutes.

The first time I saw it I felt like a child whose candy fell into a dog’s poop. 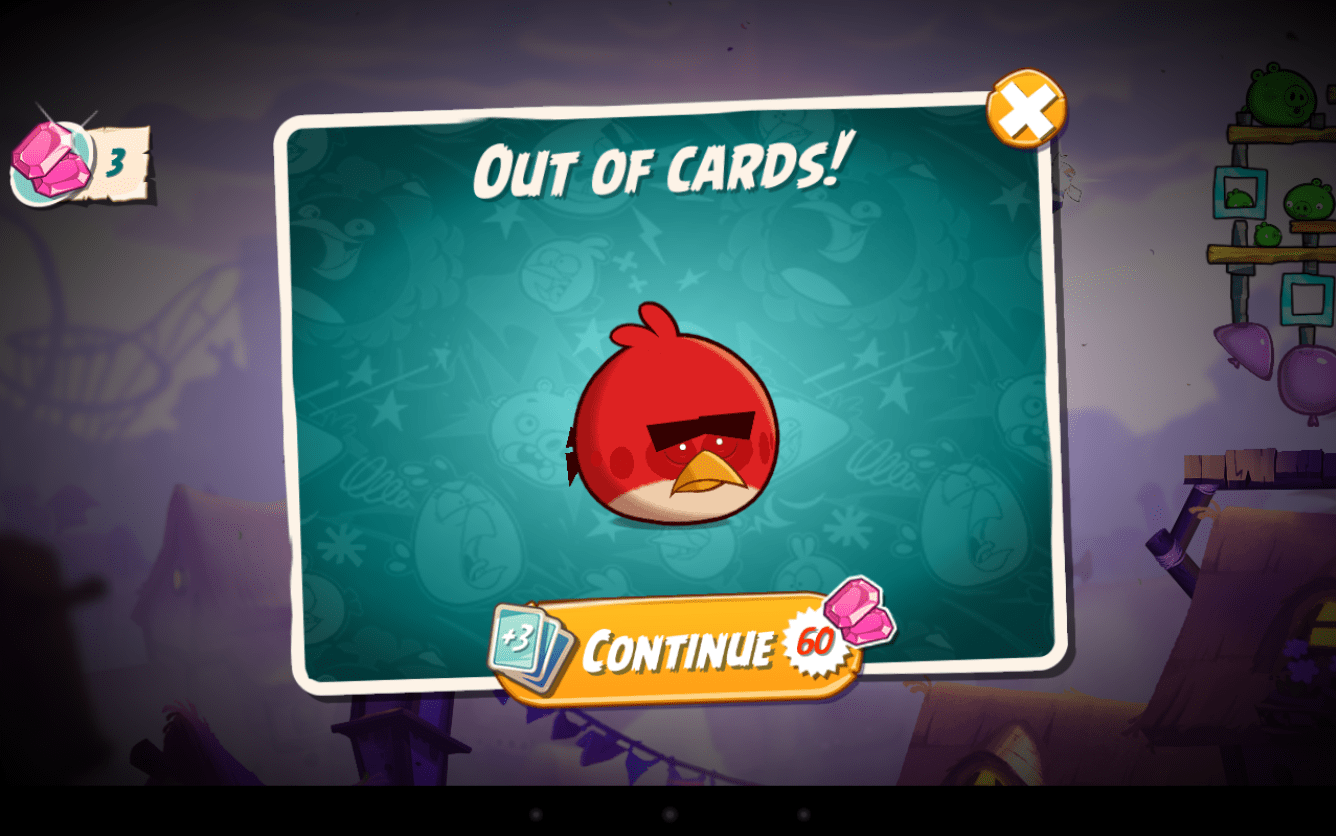 The next new thingie about AB 2 is the randomly generated levels. Gone are the days when you would get stuck on a level and retry it a dozen times to get it right. Sometimes, you would throw your phone on the couch in frustration, and after a couple of minutes run for it because your beautiful brain has finally come up with a perfect avian trajectory for the layout you learned by heart. No more of that, kids. Each replay, the game throws a new structure filled with the grinning, snorting, sleeping pigs and the random set of birds in your deck doesn’t help you do much of that good old AB strategy, either. You can switch the birds, but the game cuts down on that strategy part many of you loved about the old game. 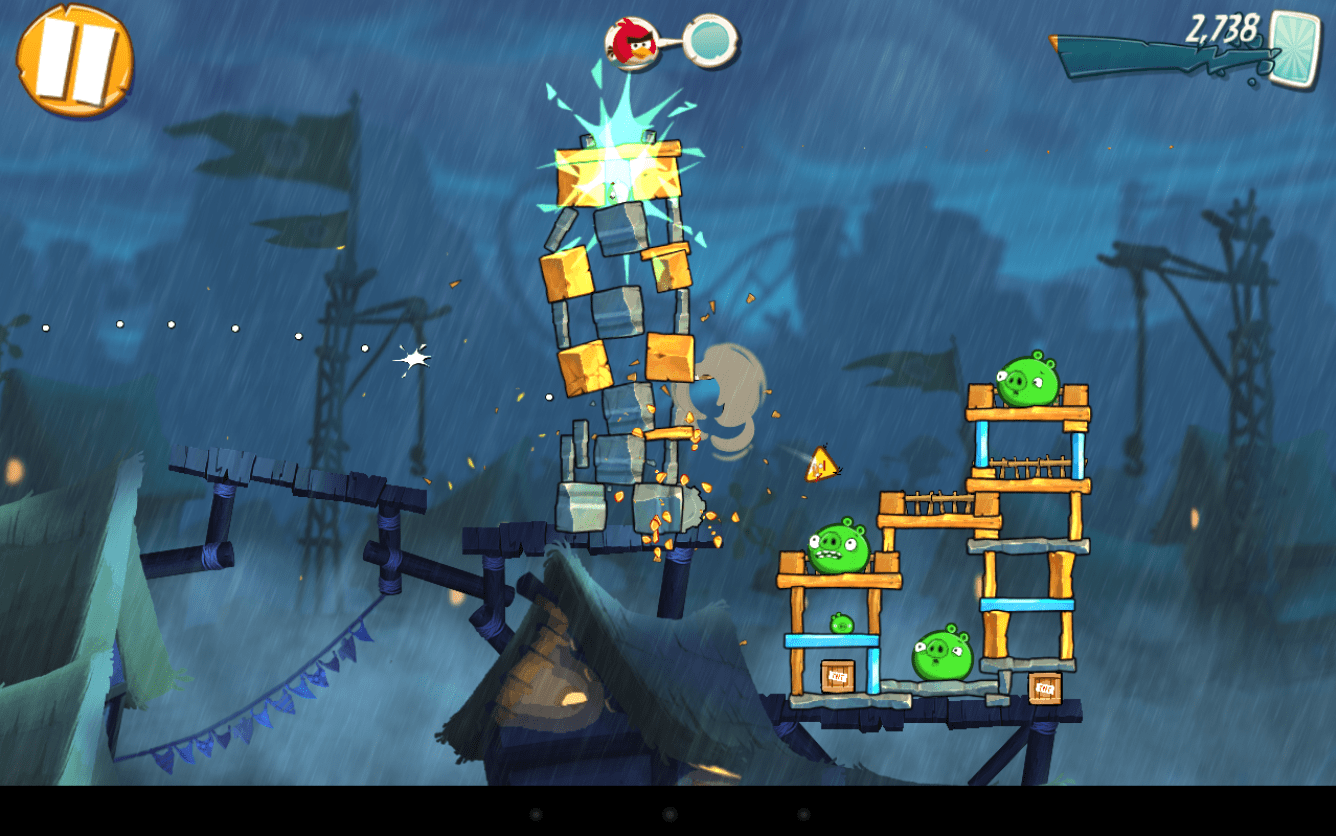 On the flip side, some of you will enjoy the randomness because it adds to the variety. Yet, the random structures never seem too creative – the one that looked like the Eiffel Tower looked fun, but on most occasions they didn’t impress. 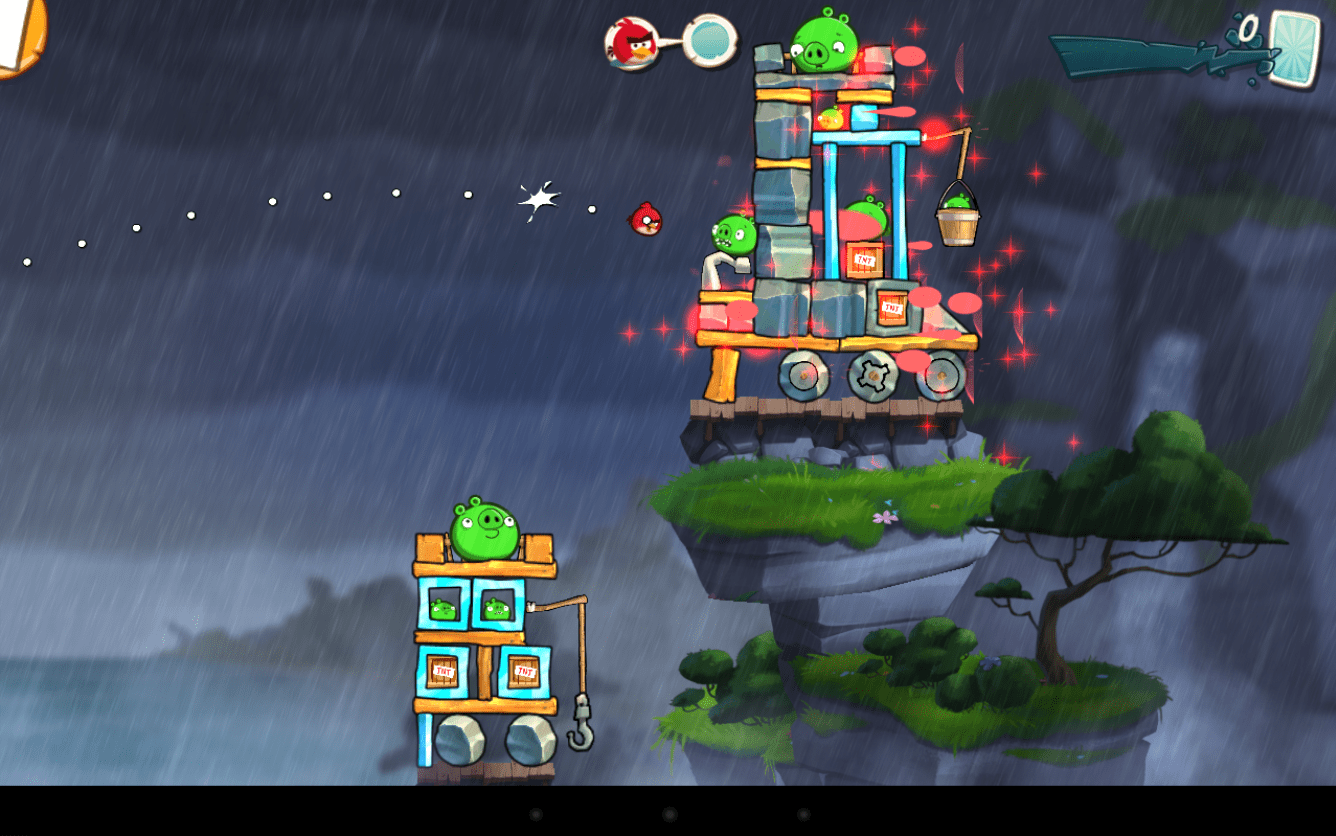 What else? There is a new bird called Silver and it does a funky salto that I find very hard to get used to. There are boss stages, with big fat pigs that just won’t die when you hit them. There is Arena you unlock after stage 25, which is basically an endless level designed to take you somewhere on the leaderboard and earn you some feathers – still no idea what these are for. 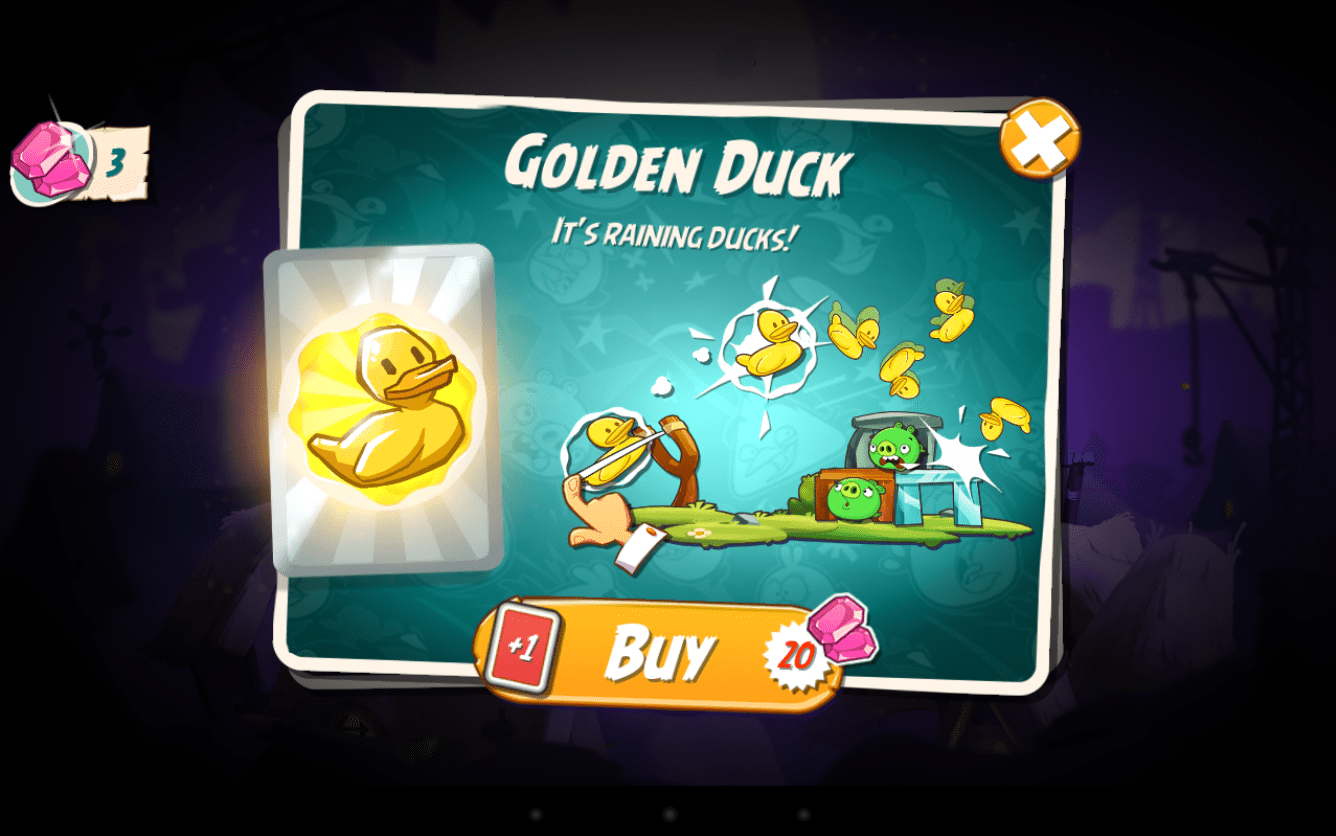 Then, there are power-ups, or spells – rain of golden ducklings, chili pepper, frozen snowflake and a couple more – a faint hello from the AB Epic. You don’t just get those, you have to buy them for gems, but let’s dwell on that a bit later.

While the above-mentioned changes are somewhat controversial – the Canadians like it, others might be not so spellbound – there is one department where Rovio is at its best. The Art. Whoever are the people who actually made the game (not you the folks who run the marketing and drive the sales) did a wonderful job here. It’s still the same art style and the characters haven’t undergone plastic surgeries or Botox injections, but everything looks polished, new, modern. The blasts, the backgrounds and the environments – big and small details look fabulous and the colors are dazzling. The funny animations when pigs are smacked against your home screen as if it was a camera is a new little touch that gave me a few good giggles.

The sound score is rather mediocre and I preferred to lower the volume – it’s not as catchy as with the first games, thank goodness. Otherwise, a catchy tune would haunt me for days.

Here comes the B part. Criticizing Rovio for greediness is like shaming Doctor Lecter for trying to open Will’s skull. A beast cannot change its nature, no matter what meds you feed him. Hence, Angry Birds 2 is fully loaded with all the perks of the freemium model.

Ads. Whenever you run out of birds in the middle of the action, you can watch an ad to get one more – but no more than once per level. The Arena entry is free once per 3 hours or so, but you can watch an ad for one extra free entry. As a result, you’ll be watching quite a lot of Clash of Clans and Rovio ads. 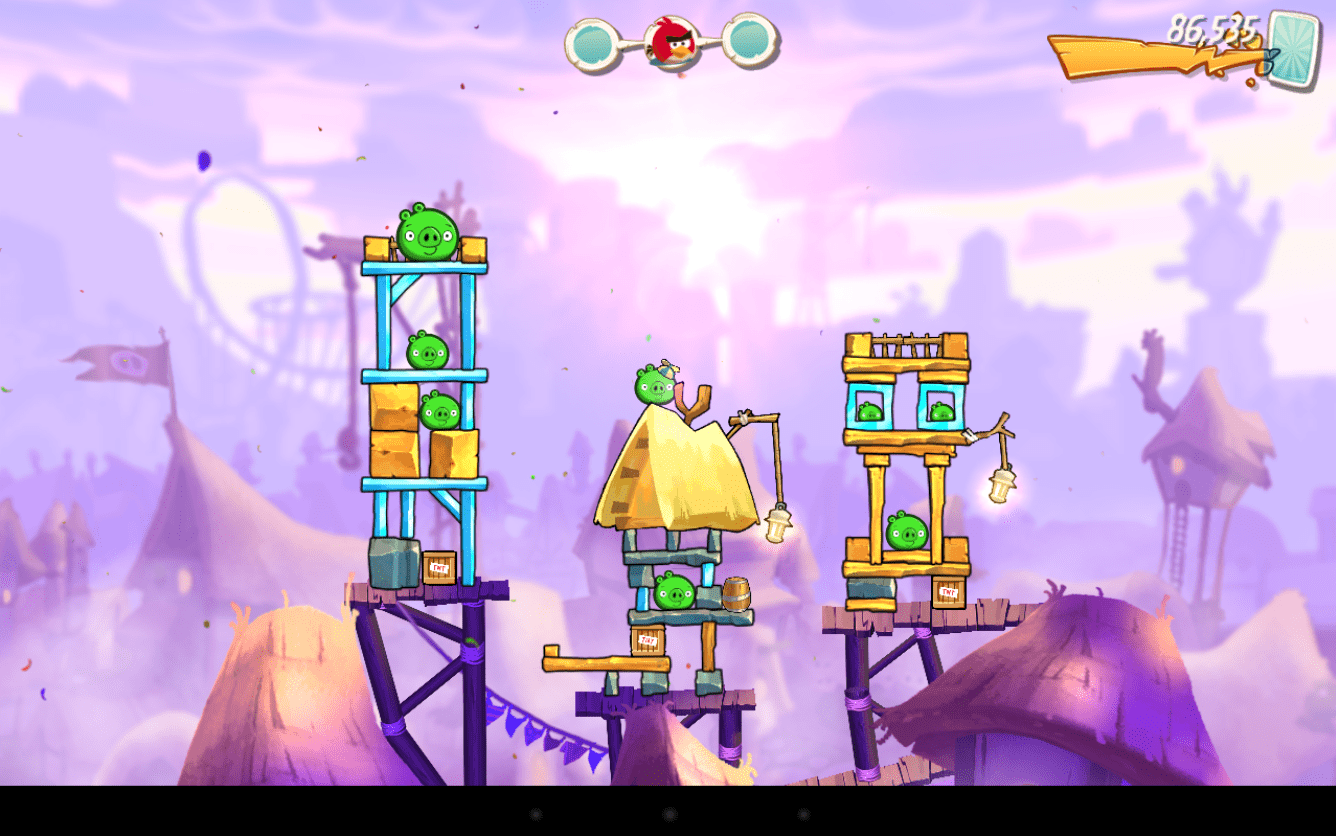 Gems. The lives and spells cost gems, and they come in a great variety of sacks, baskets, parcels and crates starting at $0.99 and to the infinity and beyond.

The spells you buy are one-time, which means you will always be short of those. The game grants you a couple of gems for beating some five stages, or for logging in daily, but considering a single chili pepper spell costs 30 gems, you will run out of the free gems in no time. 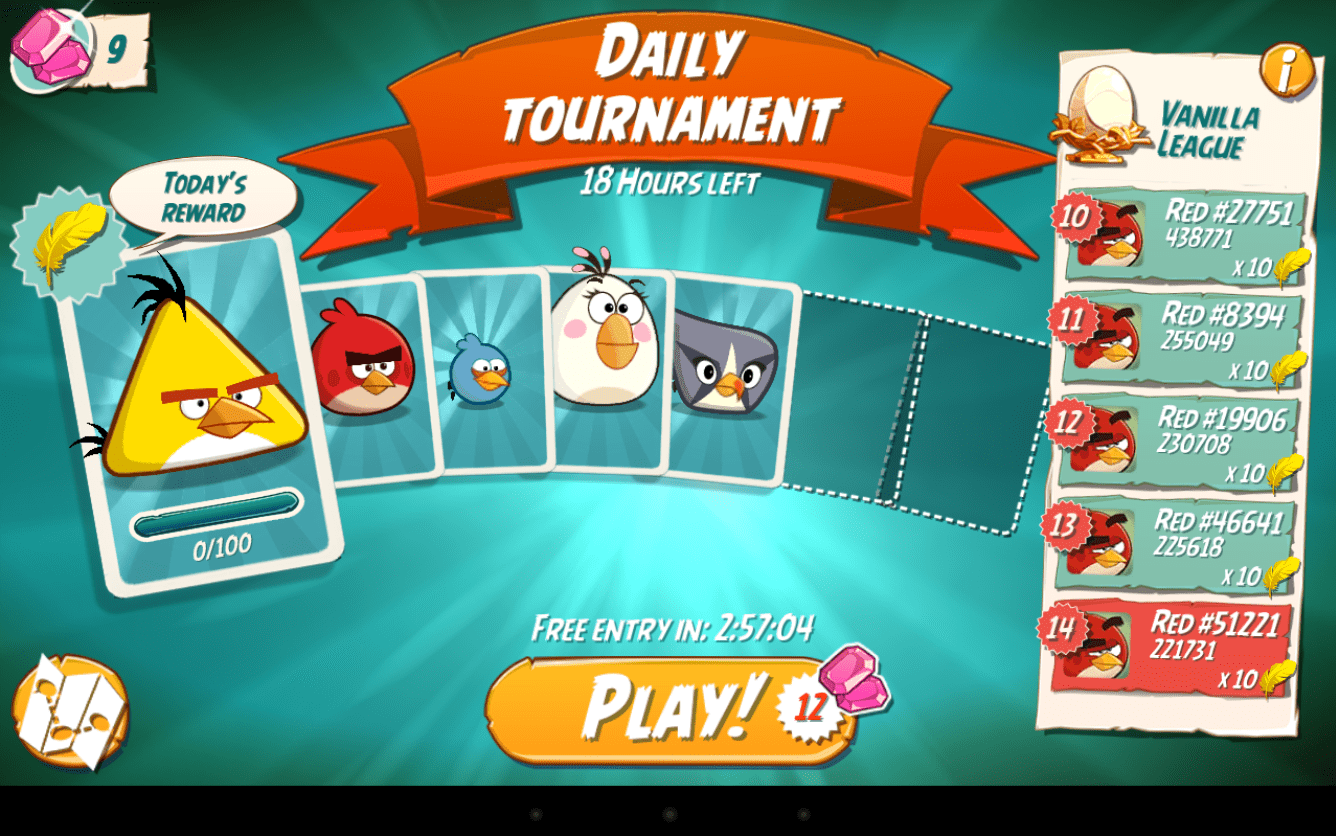 Finally, the five levels regenerating over 2 hours 30 minutes, plus maybe one life in exchange for watching an ad is draconian. Yes, I think it’s off-putting and no, I would not recommend to spend money on anything in this game. Unless, Rovio would release a premium version for $5 that would let you play the “normal” way, without timers. However, having invested nearly a year into tweaking the system in soft-launch, the company is unlikely to change anything, and the current system must be working out pretty well thanks to the great number of addictive personalities in Canada.

There is no way of saying it nicely. The times have changed and we are in 2015, when the amount of AAA and indie games with freemium models done right is great. Alive and very well off is the premium model – something that some “visionaries” of the past predicted should have died out by now. Rovio does not surprise with its unreasonable appetites, but there is one very simple remedy to it – just think, it really is simple. 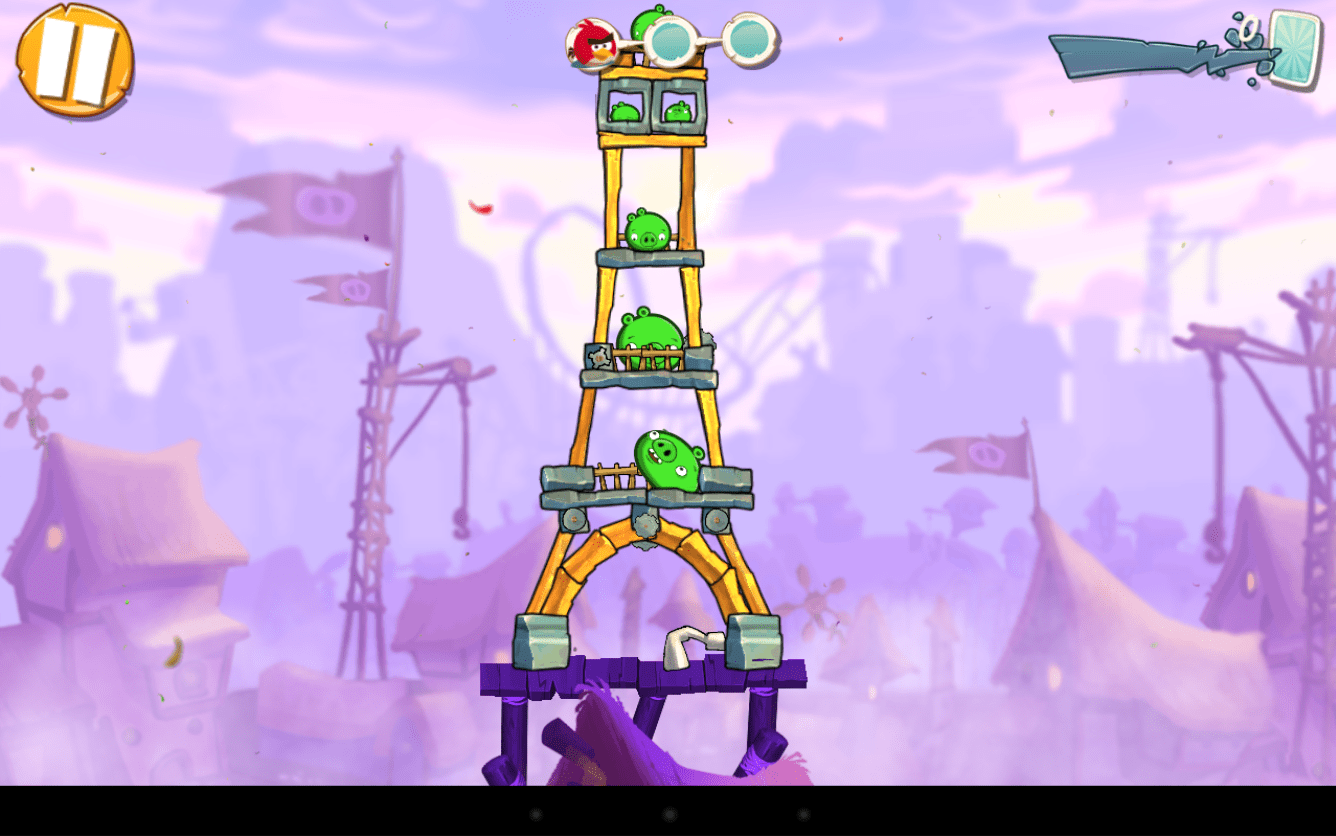 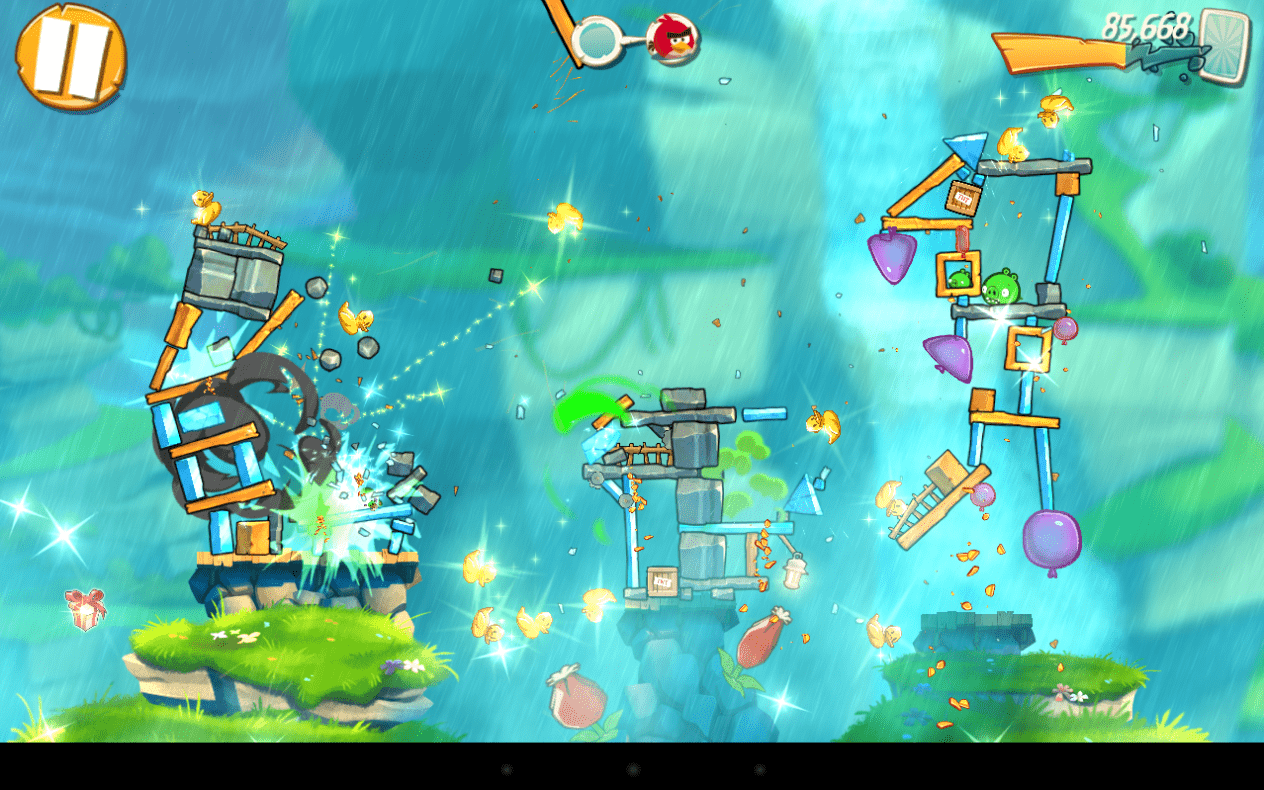 Angry Birds 2 is fun to play and a fantastic spectacle, with the visuals making a major leap from the previous games. How you take the changes – for better or worse – depends on you. You can no longer muster a hard level and have multiple re-tries – the randomness has done away with that strategy part in most punishing of ways. At the same time, the game is as more varied as it has never been. But within that juicy apple hides a hefty dose of GMO (IAP, timers, spells, ads) that might be hard to stomach for some players. Overall, AB 2 is a must-try game this year, possibly even a landmark that will bring back Rovio’s place in the tops, but it incorporates a few ideas that just don’t let it be as fun as it should be. 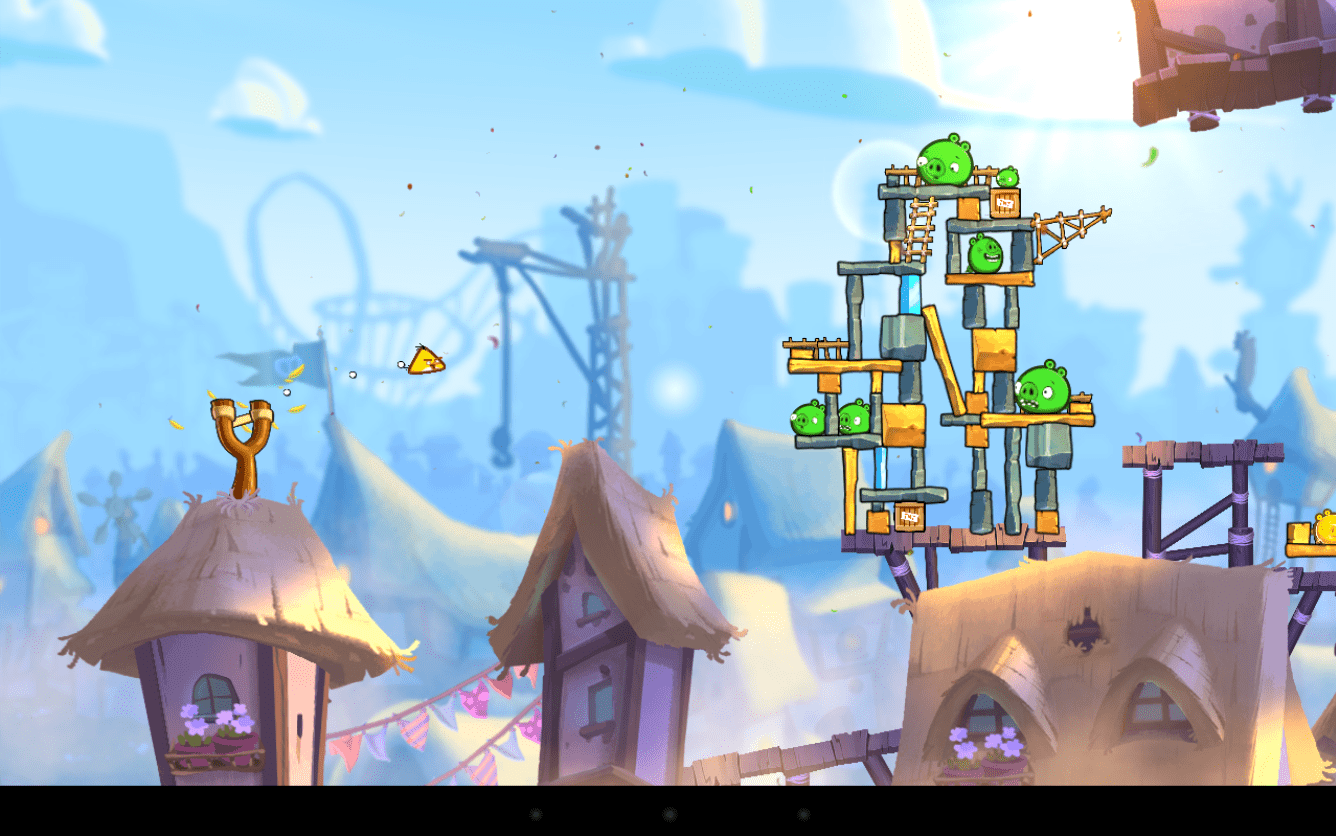