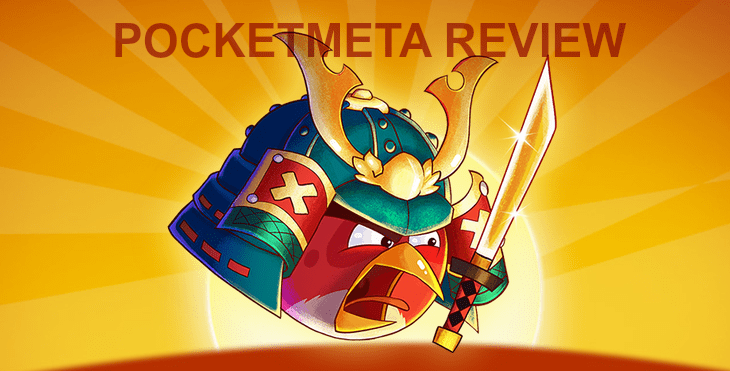 The fact that Angry Birds Fight sports a nearly immaculate rating on both iTunes and Google Play makes me sad and befuddled. The game launched this spring in Asia Pacific region and a few weeks ago worldwide, so the overall downloads have reached the 3 million count. How on Earth that amount of users managed to rate the game so high, I wonder? And then it dawns on me, as I watch my 6-years old niece giggle while playing, and bursting into tears when her parents try to deprive her from the new guilty pleasure. Angry Birds Fight is still aimed at the younger audience, which is easily manipulated and fooled. But you don’t get everyone fooled, Rovio. That poultry stinks rotten, and what you did here is pour a bottle of vinegar on the meat to make it smell like it’s fresh. And it’s not – the taste is sour and dry.

Gameplay/ or all the things that are wrong with this game

AB Fight is the eleventh game in the infamous franchise, and if Epic and GO felt like Rovio was struggling to repeat the initial Angry Birds success releasing more and more spin-offs, Fight feels like the developer is desperate.

The description and the screenshots may lead you to believe AB Fight is a match-three puzzler with RPG and social elements blended. While we love the cross-genre games, especially if they innovate and dare to risk, AB Fight is nothing of the kind. Not only does it not bring anything new to the table, but it brings all the possible freemium vice, wraps it in the famous poultry characters wallpaper and makes you feel like you’re playing a game. You’re not, and here is why.

Reason #1. Not a case of match-three done right

First of all, if you like match-three games, you won’t be doing much of it here. The match-three element is confined in the 45-second rounds, where you can’t really focus and work out a strategy to match more than three items.

Here is how the game works. You unlock birds step by step and add them to your team. Then you take one of them and go battle it out against other players worldwide in one-on-one multiplayer. Your bird just stands there in front of your opponent’s bird during the 45 seconds you have to make as many matches on the grid positioned below. The items to match are the titular birds, and even though the game gives you the hints which you can match next, you want to draw combos. The latter can make traps for your opponent, who is faced with the identical grid.

As you match the birds on the grid, your bird is receiving some boost power. Once the time is out, the game gives you a bonus time, during which you can’t match, but the AI matches them birds for you. When that is over, the two birds, your and that of your opponent, start fighting.

You don’t have any influence on the battle. Everything is set and done before the battle even begins. In fact, the outcome is decided even before you hectically match those birds on the grid to draw combos. The outcome of the battle depends solely on the stats of your bird, and if the game matches you against an opponent with better stats, it makes no sense continuing.

Try this – if you get matched against a weaker opponent, don’t match any birds at all, and you will win any way. Needless to say you don’t stand a chance against a bird with better stats.

When I look at AB Fight, I see all the things that went wrong and nearly none that went right. RPG elements don’t do it justice, either, because 90% of the game you will be busy clothing your birds in stupid outfits that need upgrading. Moreover, the amount of menus you need to weed through to accomplish something is suspiciously overwhelming. Why suspiciously? Because when a game tries to distract you from its gameplay by a trillion of menus and dull tasks of selling gear, upgrading gear, rolling the fortune wheel to try and get more powerful gear is a bad sign the actual gameplay is garbage.

Upgrading your gear, which is rubbish in itself, may be dulled by your opponent’s stronger gear, or when you finally draw that one powerful hat from the fortune chest and realize you’ve spent all those coins on your other items just to get a hundredth fraction of what this new powerful hat does to one of your birds. As a result, you may realize AB Fight is not about matching three birds, nor is it about upgrading your gear. It’s just a masquerade, an imitation of a game designed to make you spend money on IAPs.

Why the gear is rubbish? Because one time it’s a ruler, the next time it’s a frying pan or a pencil. I realize this was done intentionally to make birds look even more ridiculous, but with the overall annoyance this game ignites, those little details did not make me laugh at all.

It’s not even funny. When the fighting begins, you just sit and watch the two birds jump and hit one another with frying pans and rulers, making generic, repeating sounds. Once in a while you get a closeup of their angry mugs. I am not surprised the pig judge sitting on a stool in the middle is always asleep – it’s plain boring.

Each bird needs to be beefed up separately, which means one powerful item you have in your arsenal is restricted to one particular bird. Upgrading the gear for each bird on a standalone basis is tedious, time-consuming and dull.

The boss battles, which are dubbed monster-pig ship battles see you fighting as a crew on a ship, spitting birds at a pig-headed octopus. Once the initial few stages are over, you will see nothing but overpowered octopuses on the list of available monster battles, and if you want to beat them you will have to grind for better gear and level up.

The match-making of the players in one-on-one mode is ridiculous, and every other round matches unfairly. Either you are higher-ranked, or your opponent, so the outcome is pretty obvious before the round begins, and your desperate bird-matching doesn’t change a thing.

The IAPs and “watch an ad for a boost” are everywhere. One crystal costs $1. Of course, there are bundles and crates and boxes, but who wants to spend money on this no-game at all? Yes, you are right – children and addictive personalities. Notably, watching an ad for a boost gives you a boost, which is useless anyway if your opponent’s stats are better than yours. If it sounds like a very cynical take on the freemium model that’s because it probably is.

The design is the typical Angry Birds tale, but not in its best rendering. Again, the children love it, but overall, the game looks flat as it never did before. The sound score is utterly irritating.

This review may sound like I’ve woken up in a bad mood today, but truth be told, I am a tad annoyed at how the big-buck developers just come to the board meeting, think of how else they can exploit a worn-out idea to squeeze more money out of it, then churn out an explicitly cynical and boring game aimed at the most vulnerable of players and generate these 4.5 ratings on the app stores.

Finally, with this release Rovio may become a nickname for all the AAA-developers that churn out generic games without a heart, or soul. Oh wait, the soul must be sold to the Canadian Devil.