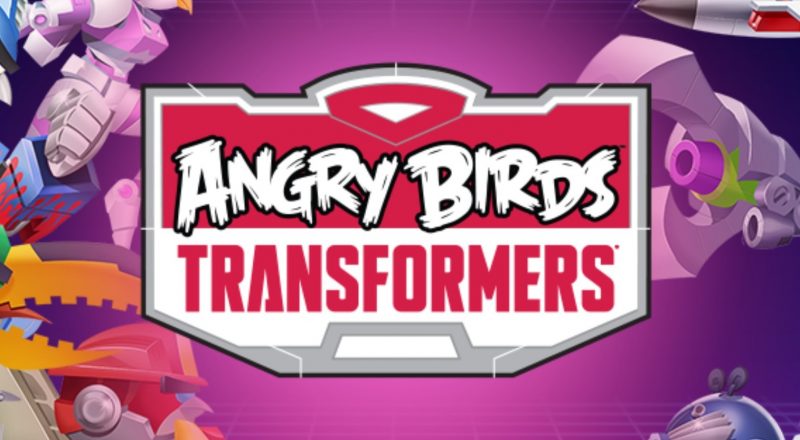 We heard about the Transformers spin-off of Angry Birds quite a while ago, and at first, there was a lot of speculation as to whether or not Rovio would break away from the Angry Birds mold — or just make it like AB: Star Wars. After they released a Gameplay trailer, it was obvious that this wasn’t just a re-skinned Angry Birds game, but another question was being asked now, and that is whether or not it’d be any good.

You’d expect a new game from Rovio to have really good graphics, and of course, that is the case with Angry Birds: Transformers. Each character looks very unique, and has it’s own unique attack animation to along with it — including several different abilities with animations as well. The scenery looks great, although it seems to take forever to get out of the beach levels and start seeing what else the game has to offer.

The comic strips that show up whenever you unlock a new character are a nice touch, but I wasn’t a huge fan of some of the game’s UI visuals. It’s not that they’re ugly, but they just didn’t seem as smooth as the actual in-game graphics. That being said, its just a very minor hindrance, but still not the only thing that holds the game back visually. 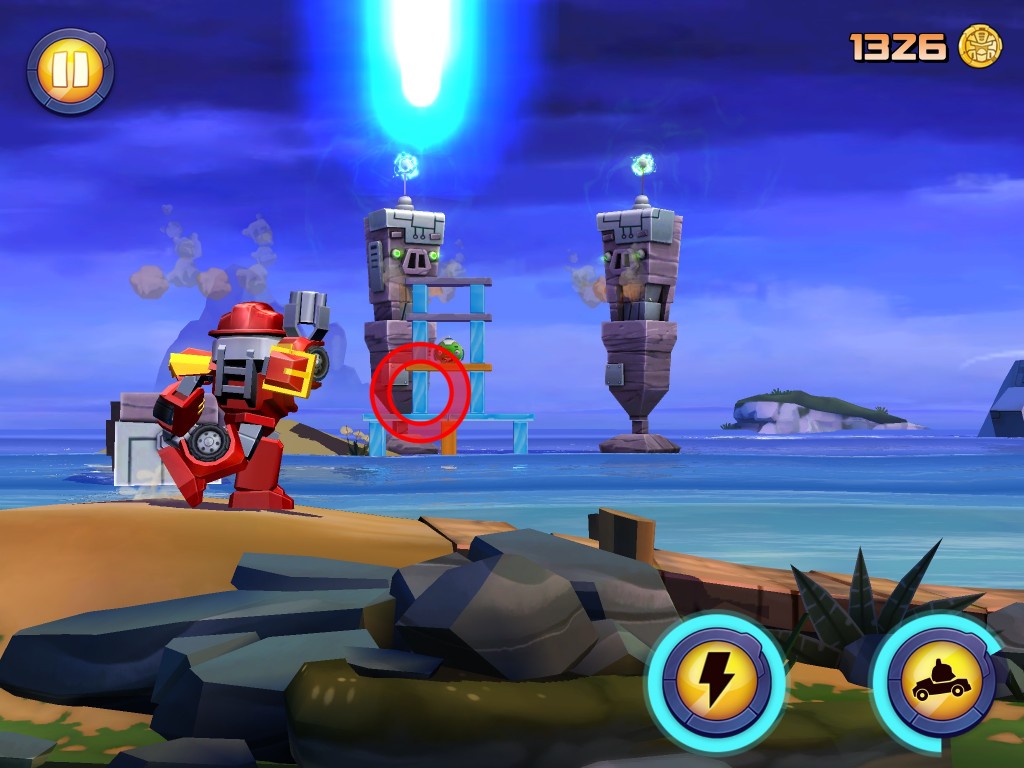 Visual variety is a big thing for me, and although it is definitely present in AB: Transformers, it just takes way too long for you to actual see that it is there. I mentioned above that it takes seemingly forever just to get out of the Beach area, and while you’re there, you’re going to be looking at the exact same stuff the entire time. For kids, I’m sure they really couldn’t care less, but for me it’s annoying. I understand this sort of goes hand in hand with progression, and it’ll take a bigger hit in Gameplay/Replay Value for it.

Angry Birds: Transformers is a pretty simple game, just tap the screen to aim and let your character fire away. Every character is able to transform into a vehicle, and If you level up your characters, you’ll eventually unlock other useful abilities too. As you progress through a level, there will be different kinds of pigs you need to dispose of — some armed, some not. It isn’t required that you get rid of every one, but each one is saved and eventually used to unlock new characters.

Destroying objects and pigs also gives coins, which are used to upgrade and heal characters, as well as unlock new levels to play. Other than that, there isn’t much to the game, except for waiting to play it. There are usually only a couple of levels to play at a time, and once you’ve completed them, you need to wait for other ones to open up. Finishing a level will also cause it’s node on the map to start generating coins, up to 400.

The general process for playing the game involves collecting on your nodes, starting a character upgrade, and then playing whatever levels you have available. After that, you’re going to need to wait a bit, unless you spend gems. Gems are either purchased, or unlocked via achievements and treasure chests that appear on the map. You really can’t rely on the free gems on a regular basis, but they do add up relatively quick and can be used from time to time to speed something up.

Not much more than what meets the eye

Despite the extremely simple concepts the game offers, it’s still relatively fun to run through a couple of levels and blow things up. Unlocking new characters is somewhat frequent, and is one of the biggest factors that keeps the excitement alive. Each character has a new weapon, and new set of abilities to unlock, but it should also be noted that a random character is chosen for each level. You’ll see which character it is beforehand, but there’s no way to change it. 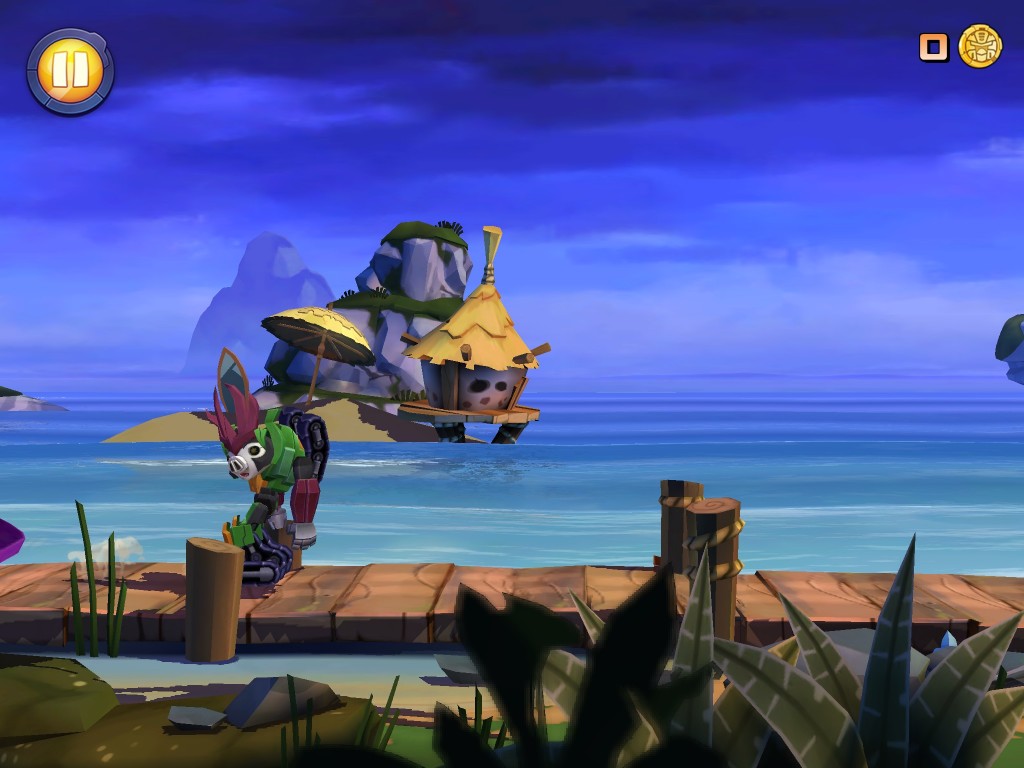 The game has a really big map which I’ve only begun to scratch the surface of, but it progresses way too slowly. Granted I haven’t been playing every level as soon as it becomes available, but even after a considerable amount of time spent playing the game, I’ve only made it to the second set of scenery. I’m still curious to see what else the game has to offer, but I just don’t know if it’s going to be worth all the waiting just to see some new environments.

Still, the game is very playable even though it progresses slowly. If you’re someone who doesn’t bother with waiting games, you’ll probably want to steer clear of AB: Transformers — but on the other hand, those who only have short periods of time where they can play mobile games, it’s the perfect fit. At the end of the day though, that’s not really a good thing, and is the biggest factor holding this game back from a better grade.

Angry Birds: Transformers, is not your traditional Angry Birds game. That doesn’t automatically make it good, but at least you don’t know exactly what to expect. Although it is extremely simple, there is still some charm to this game that keeps you coming back. The IAPs are surprisingly less punishing than expected, but you will spend quite a bit of time waiting for levels to open up and characters to upgrade. Still, it’s a pretty solid free game, and better than I had originally expected.