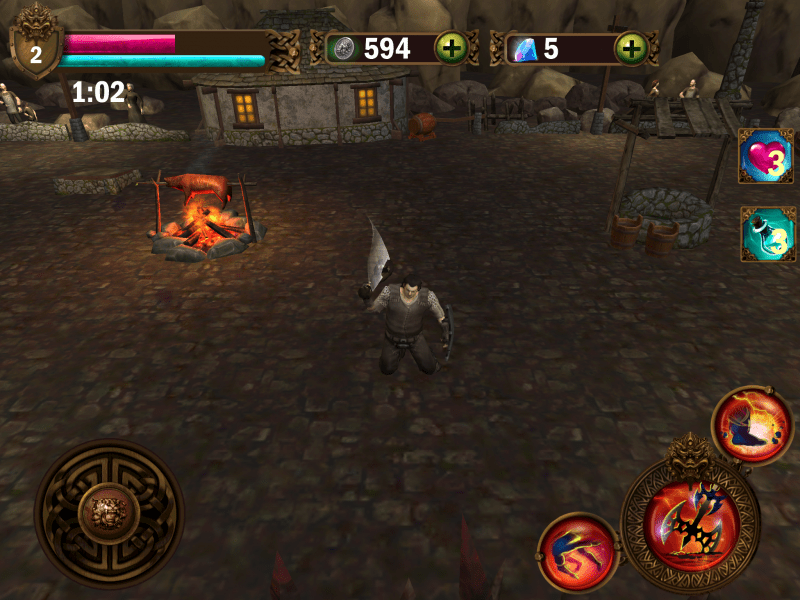 Recently, I had the pleasure of reviewing an amazing game by the name of Eternity Warriors 3, and you should definitely check out the review. The reason this is relevant, is because when I was getting EW3 on my iPad, I stumbled upon Angry Warrior since it had a similar title. I was slightly intrigued, so I downloaded it and set it to the side to look at later — I ended up getting so into EW3 that it wasn’t until a couple days later I even opened Angry Warrior. Now, I didn’t except Angry to live up to Eternity, but let’s just say the difference is almost comical.

I’ll warn you by saying this review is just going to go downhill from this category onward, but Angry Warrior had one thing going for it — relatively nice graphics. However, it should be noted that these graphics are also plagued with ugly interfaces and broken English text. There’s some standard medieval background music that gets old pretty fast, and the sound effects are unbearable after a few minutes. Your character’s movement animations aren’t too bad, but when you do a bit of kiting with the Orcs, it ends up looking like they are moving in a conga line. 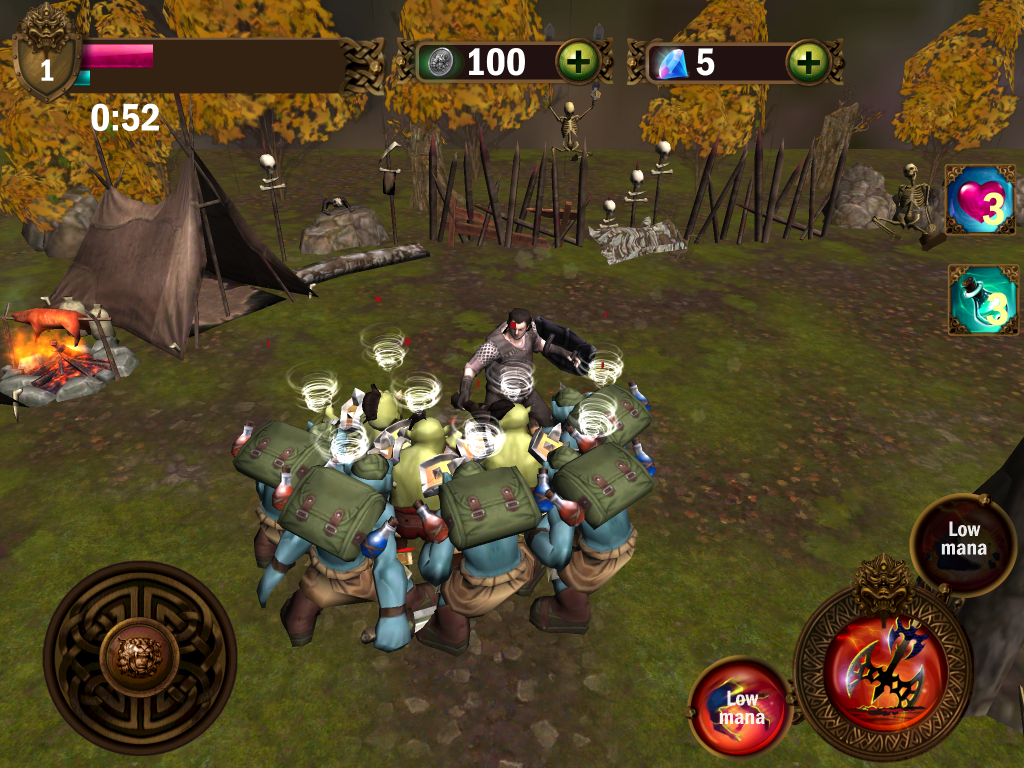 Making good use of my Foot Stomp, followed by a basic attack that killed them all.

You can see from the screenshot above, whoever made this game decided to use some of the most boring and unappealing Font and text placement. For  example, the “3” in-front of my Mana Potions is almost impossible to see. Similarly the “Low mana” in-front of my Dodge Roll skill requires a double-take, especially in the midst of battle.

For the first mission, which lasted about a minute, I was thinking to myself that maybe this game will be decent — the graphics were nothing special, but maybe as I level up I’ll unlock more skills and features. Shortly after that I realized (about half way through my second mission), that I was probably wrong. The primary indicator, was that my second bout with the Tentki area, was 100% exactly the same as my first bout. Whats worse, is that I noticed from the beginning there was only 5 areas, so I expected there to be a few missions in each area; Wrong!

I cautiously approached the Draw-Well area, and was greeted by pretty much the exact same environment as before, but it was a little bit darker (see image at the top). Levels are unlocked at 5, 15, and 30, but unfortunately you need to play through the first two missions about 10 times each before you even unlock Stone Ring. I won’t lie, I didn’t bother going any further than level 5, because I really didn’t feel like playing through Stone Ring 100 more times just to see what Arrowia has in store. 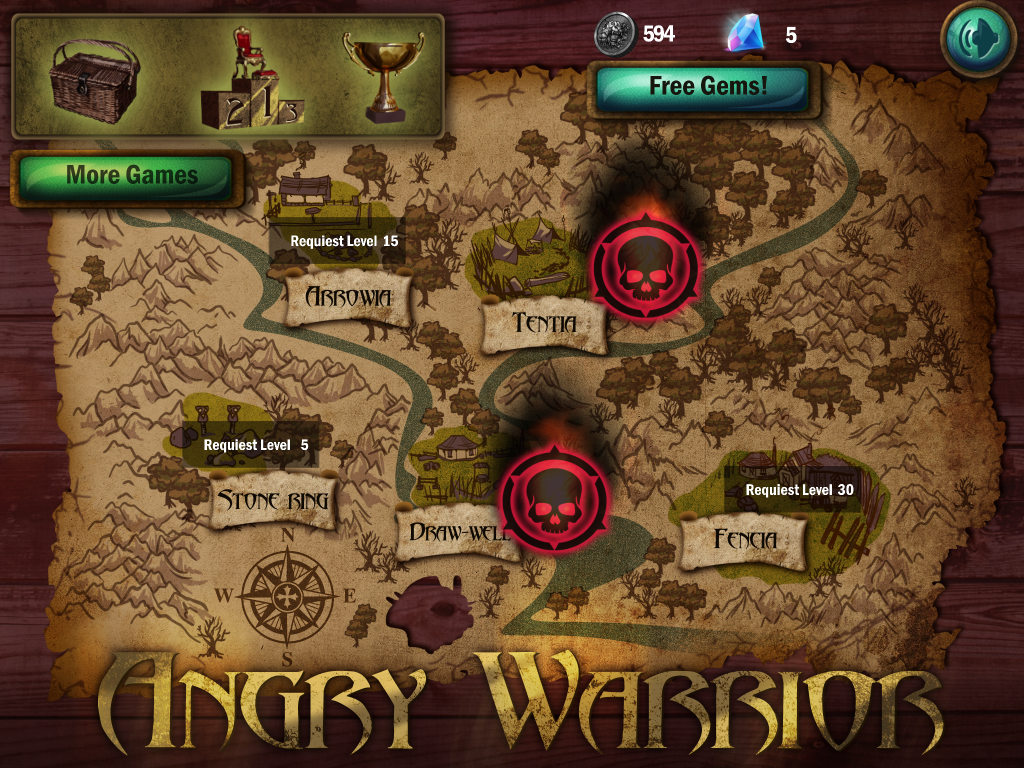 Every playable level in Angry Warrior… All five of them…

As for skills, you’ve got one basic attack that doesn’t even allow you to perform a combo, along with a dodge roll and a Foot Stomp that stuns all nearby Orcs. You will get so bored, so fast, and eventually you’ll question why you’re even playing the game anymore, since you’ve been doing the exact same thing for the entirety of your game session. But for what it’s worth, the game runs pretty smooth and it’s somewhat satisfying to kill Orcs (for a few minutes). There’s a couple minor glitches, for example I had an Orc who just stood still and didn’t try to attack me, but there’s nothing major.

A primarily reason I play Dungeon Crawler games, is the rewarding feeling you get when you unlock a new piece of gear. But, by the time you actually unlock anything in Angry Warrior (although it’s likely you won’t), you’d likely end up hating yourself for playing this game enough to actually unlock the Dagger. Your first unlock, isn’t until level 6, so you’re even worse off looking forward to a shiny new Dagger, then you are looking forward to the Stone Ring. 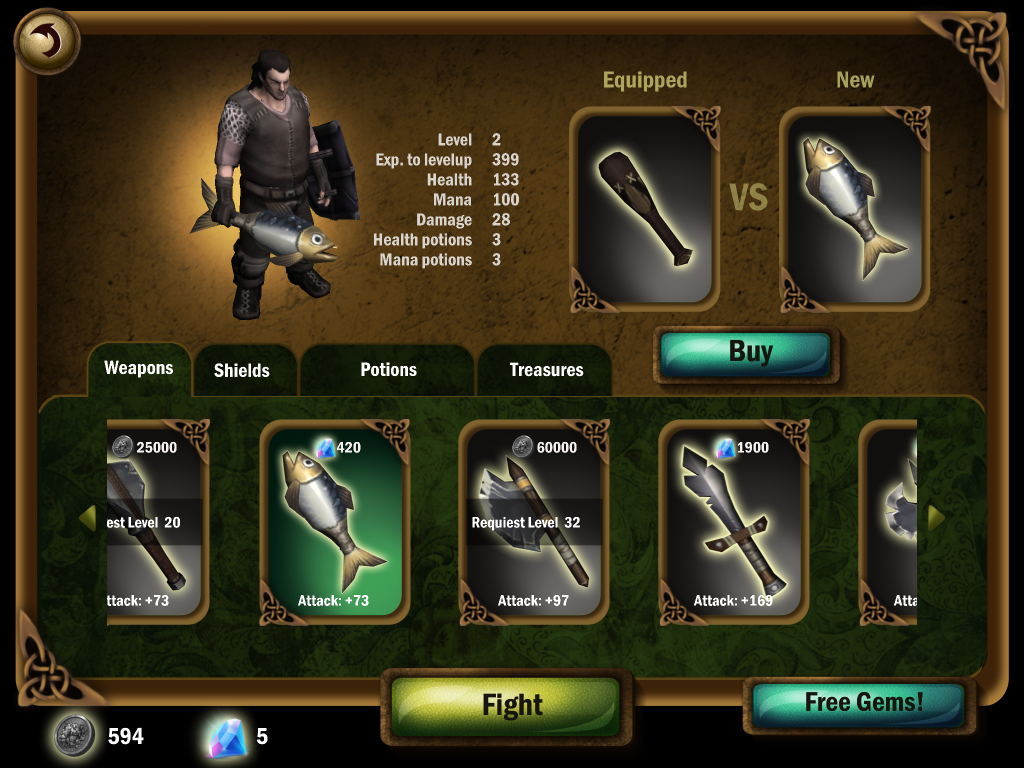 The shop offers some interesting items…

The fact is, Angry Warrior just doesn’t offer anything worth your time, and especially not worth your money (there is a purchasable currency). Maybe with some additional levels, more obtainable upgrades, a few useful skills, and a complete overhaul on how yours and your enemies attacks work, there might be something here. But as it currently stands, Angry Warrior is really only worth about 15  minutes of your time.

You could spend hours battling through the same minute long missions to reach the maximum level, you could unlock every item in the shop, you could even spend $3 to unlock the Fish weapon. I wouldn’t recommend doing any of these things though, because you should probably spend that time playing games that are about 10 times better.

Check out Angry Warrior on the Google Play Store here.

Check out Angry Warrior on the Apple App Store here.