There were several new games released this week that I’ve been eager to try out, and first on my list was Anomaly Defenders. I’ve always enjoyed the Tower Defense genre, and when I saw the fantastic visuals, my interest was definitely peaked. Obviously nice graphics aren’t the biggest factor of a successful TD game, but I know Chillingo has a really good track record, so my expectations were definitely very high going in.

Without a doubt this is the best mobile Tower Defense game I’ve played since Sentinel 4, and in my opinion, it’s even better. Anomaly Defenders is a lot of fun, really addicting, and forces you to implement intelligent strategies to be successful. Between the astonishing visuals and smooth gameplay, there’s not much to nitpick about.

Anomaly Defenders has some really awesome scenery, and overall it was a treat to look at. Everything from the tower designs, enemy designs, and attack animations — it all looks really great. My frame rate was near perfect throughout my experience with the game, even though it is a bit more graphically intense and I was only using an iPad 3. For the most part, it’s mostly color scheme changes between each level, but every so often there is a level that looks really unique compared to the rest. 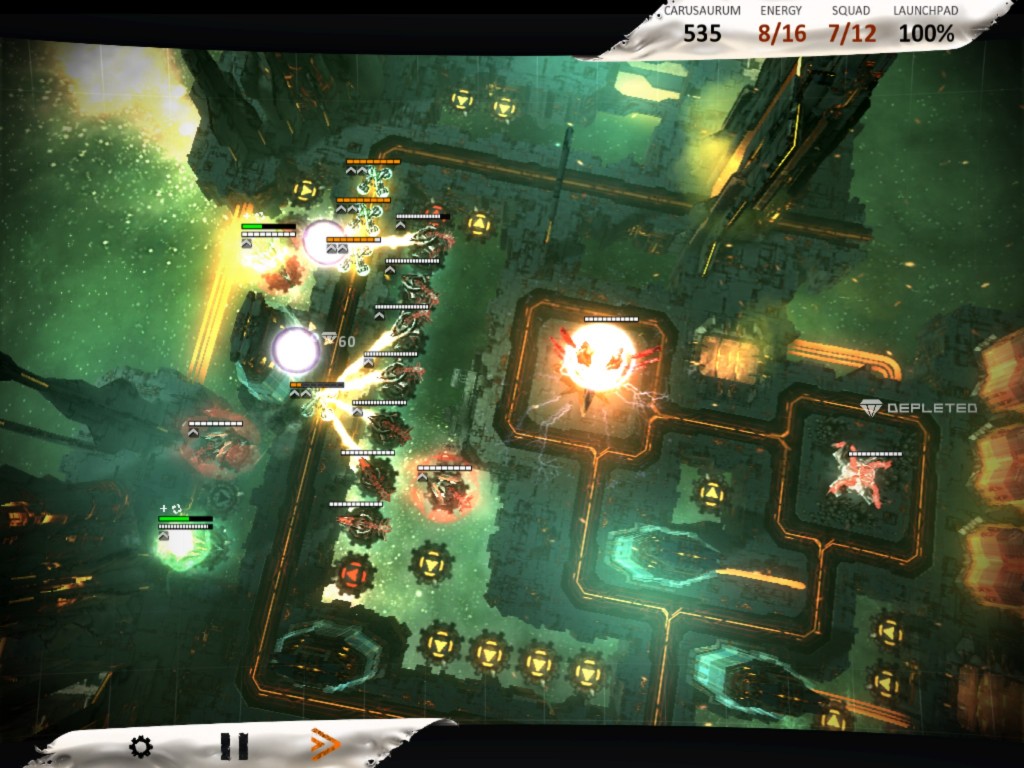 If there is one thing holding it back visually, it’s the Interface graphics. They don’t seem to match up quality-wise to the in-game graphics, and although they are still above average — they still aren’t sleek enough to merit perfect visuals overall. Of course, this is a minor part, and so I’m only going to dock a half point because of it as it doesn’t really affect the still awe-inducing visuals on display when you’re actually playing the game.

There were a couple of times when on-screen elements were hard to see due to a very bright light in the background. For example, take a look at the image below and you’ll notice the word “Depleted” is somewhat hard to see. Again, this is a very minor issue, and this one in particular is rare/unimportant enough to where I won’t even hold it against the game.

I wouldn’t say there is anything about this game that really breaks the mold of the Tower Defense genre, but it has nearly perfected the art. Each level has several different routes to your base, and your enemies can change their route from wave to wave. This mechanic makes it important to preserve your currency instead of loading up on a single lane. You get access to a lot of different towers that are effective against certain types of enemies, and it’s crucial to execute these strategies in order to complete the levels on hard difficulty.

The top-right corner of your screen displays your Carusaurium, Energy, Squad, and Launchpad. Squad is simply the wave number, and Launchpad is your base health. Carusaurium is basically your cash, which can be spent on creating new towers, as well as upgrading them — this is earned by using Harvester towers (limited amount per level), defeating enemies, and selling towers. Energy is used to execute abilities such as tower repair, tower shield, damage buffs, and more. You gain energy by tapping the orbs that appear when an enemy is killed, and you have a limited amount of energy, although the cap can be increased. 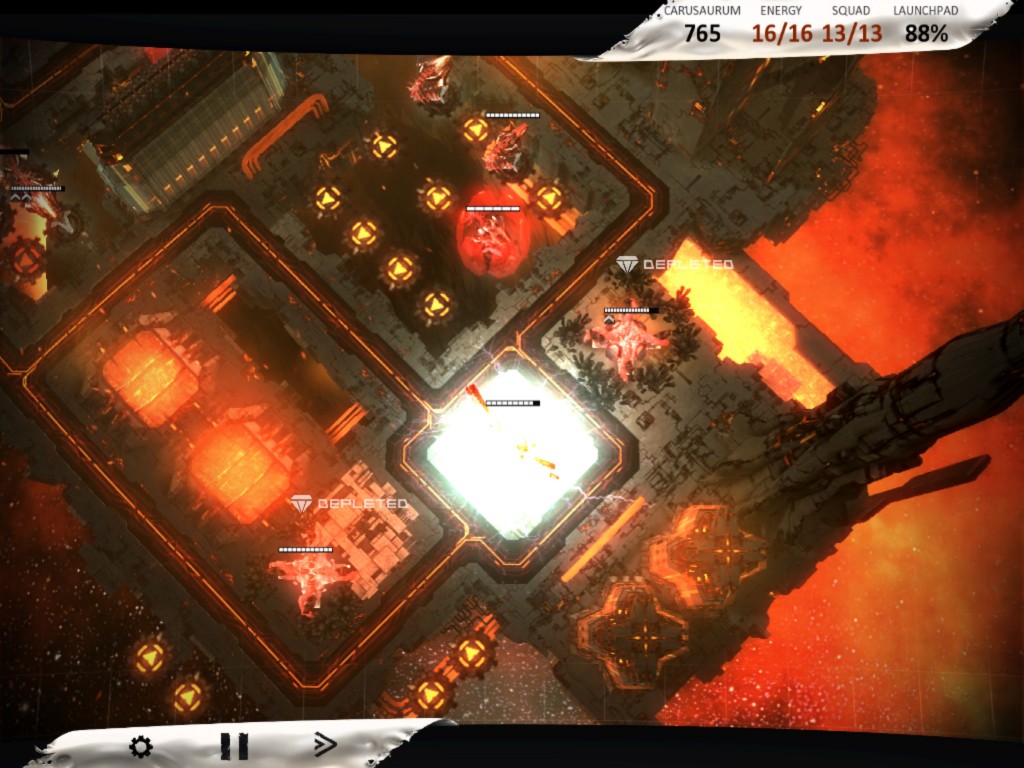 Depending on the difficulty you choose, you can earn more or less technology points, which in turn can be spent on unlocking new turrets or increasing the maximum strength of your current turrets. The technology tree can only be adjusted prior to starting a level, although it would be interesting if you were able to adjust mid-game. Upgrading a turret’s maximum strength will still require you to spend carusaurum to upgrade it during a level. Technology points are also used to unlock new abilities and make the more powerful, as well as increase passive stats like critical chance.

Overall, the gameplay is extremely well executed, and plenty of fun. It never gets boring or too repetitive, and each level imposes new challenges that you must adjust your strategy to prepare for. The one thing I dock a half point for is that there’s only one game mode, and nothing innovative to the genre.

Being able to create and upgrade towers quickly and easily is crucial to a successful Interface for any TD game. Fortunately, Anomaly Defenders knocks this one out of the park, and offers up one of the most accessible UIs I’ve ever used. I never had trouble tapping the tower spot that I wanted to build on, or upgrading the right tower. Everything you’d ever need to tap has a big enough tap radius to where you have a very minimal chance of mis-tapping. 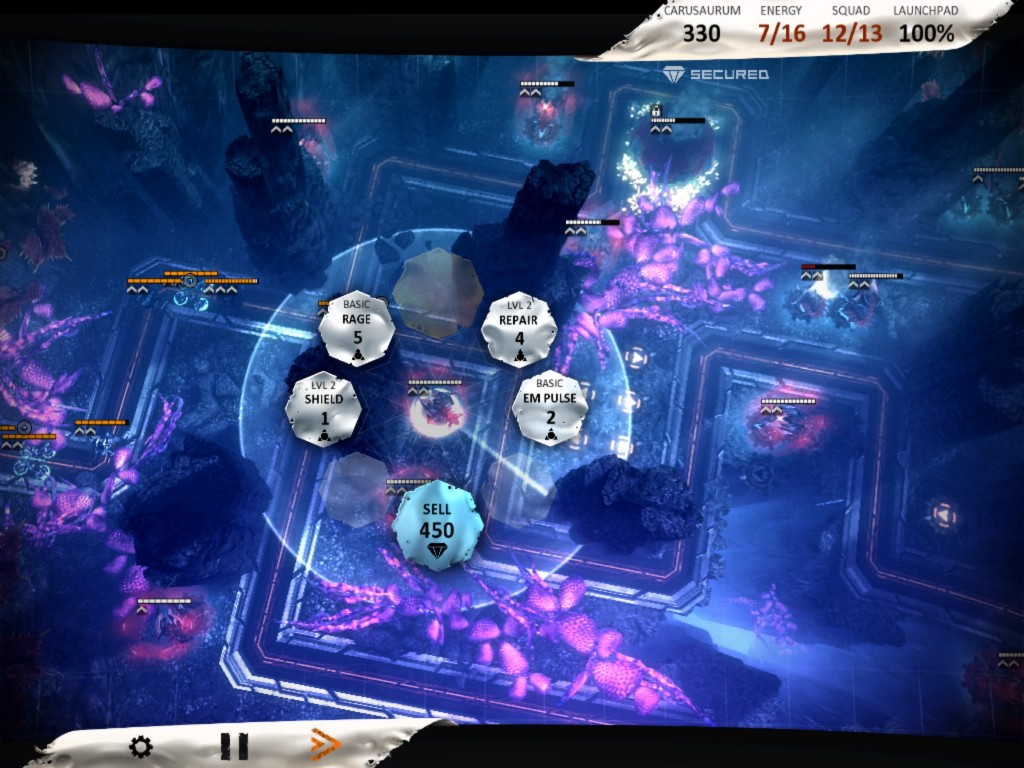 On the bottom-left corner there is a pause/play button, as well as a normal/quick speed button that help you control the pace of the game. You can pause the game and queue up new towers or upgrades, and they will all start simultaneously when you resume play. Every time you upgrade or build a tower, it takes a couple of seconds to complete, and the game can’t be paused during this time. Because of this, you get time to really come up with the perfect strategy to deal with the incoming waves.

I couldn’t find any reason to fault Anomaly Defender’s UI, and this is the biggest reason why I prefer it over Sentinel 4.

There are a total of 24 levels to play through in Anomaly Defenders, some can be completed in just a couple of minutes, and others can take quite a while depending on how good you are at managing your units without pausing. Once you start playing missions on hard, it becomes almost impossible to win without at least playing on normal speed for the majority of the time, if not pausing on a regular basis. I’d say its nearly impossible to complete missions on hard before doing a few on normal, as upgraded abilities and towers are usually necessary.

Once you’ve completed the campaign, there isn’t a strong desire to go back and play through it again, but you are able to score some more technology points by re-playing levels on a higher difficulty. I can’t imagine everyone will want to do this, but if you really did enjoy the game (like I did), it’ll be worth it to max out your technology points and get an ultra powerful set of towers and abilities. 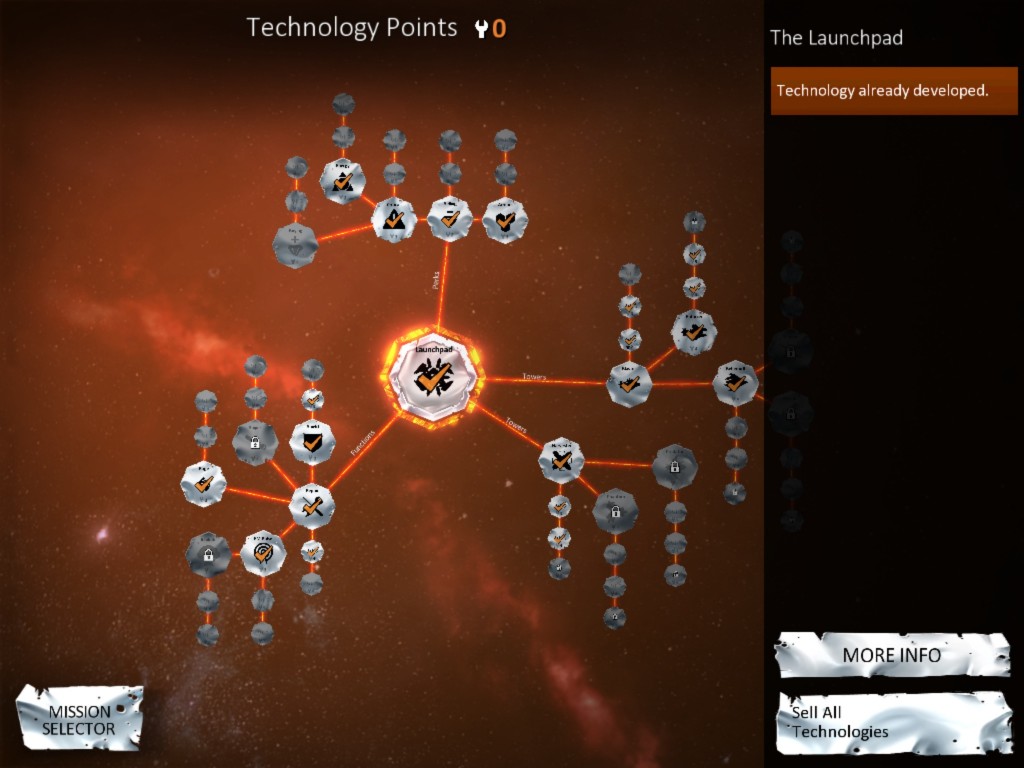 Since your technology points can be reset at will, it opens up a lot of room for customization. Because of this, you at least get something to do other than just playing through campaign missions. Unfortunately, you won’t be doing much else outside of these two areas of the game, since there are no other game modes available. If there’s one area Anomaly Defenders could learn from Sentinel 4 in, it’s Replay Value. I’m not saying that they need to copy them directly with an endless mode, but it’d be nice to change up the pace once in a while and break away from regular campaign missions.

It might be fun to have a game mode where you choose which units to send against an AI controlling the towers, and would help players learn what the enemy units do in campaign mode and how to prepare for each one on both sides of the spectrum. Not sure if that’s been done before, but if it is I don’t believe it’s too common — and would be a nice way to bring some more innovation to this game.

Anomaly Defenders is well worth the $4/$5 it costs (depending on your platform), and if you want some extra value you can pick up the Humble Bundle 11 for $11 and get this game as well as a bunch of others. If you are at all a fan of Tower Defense games, there’s no reason you shouldn’t check this game out. The gameplay is superb, the graphics are immersive, and the UI is flawless. Unfortunately it’s not really a game that you’ll play too much after beating the campaign, but that’s not the end of the world.

Click here to check out Anomaly Defenders on the Apple App Store!

Click here to check out Anomaly Defenders on the Google Play Store!

Make sure to share this review with your friends via our social media outlets below, and if you’ve got something you want to say about Anomaly Defenders or our review, leave a comment as well!