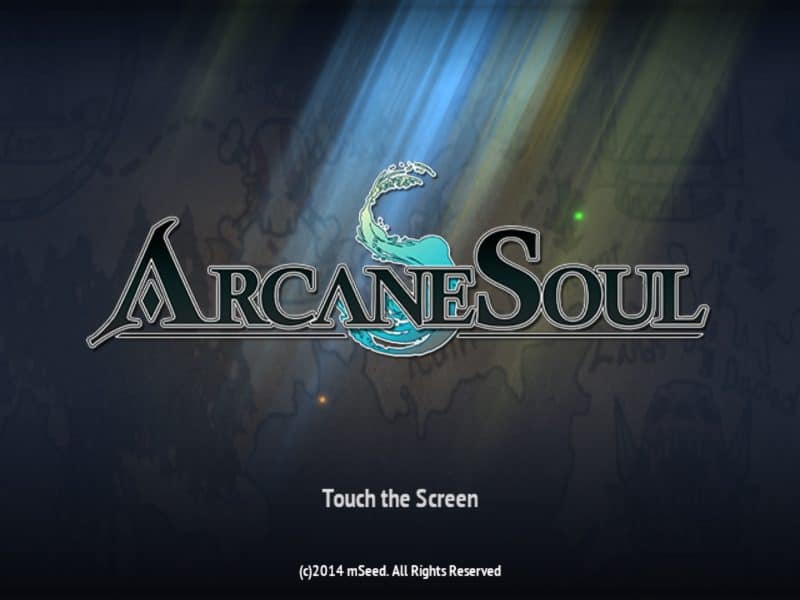 It’s a side scrolling dungeon crawler with a surprising amount of character customization, but suffers from some rather large flaws. Arcane Soul just came out a few days ago, so there is hope that the developer can fix some of the current issues — and if that happens this game might have a bright future. In it’s current state, the game is pretty mediocre, but since it’s a free game and it’s by no means terrible, you may as well check it out. There are some IAPs available (of course), but I never really felt the urge to get them, and they definitely weren’t necessary.

There are a total of four environment types you’ll play on throughout the game, one for each act, and each act contains five levels of that particular environment (desert, grassy, etc).  As for enemies, you’ll fight a handful of different types, but they tend to stick around for several levels and just get stronger. Each skill has a unique animation, and you’ll unlock a new one every few levels. Other than that, you have three different characters you can play as, but the only real visual change you can make is their weapon. 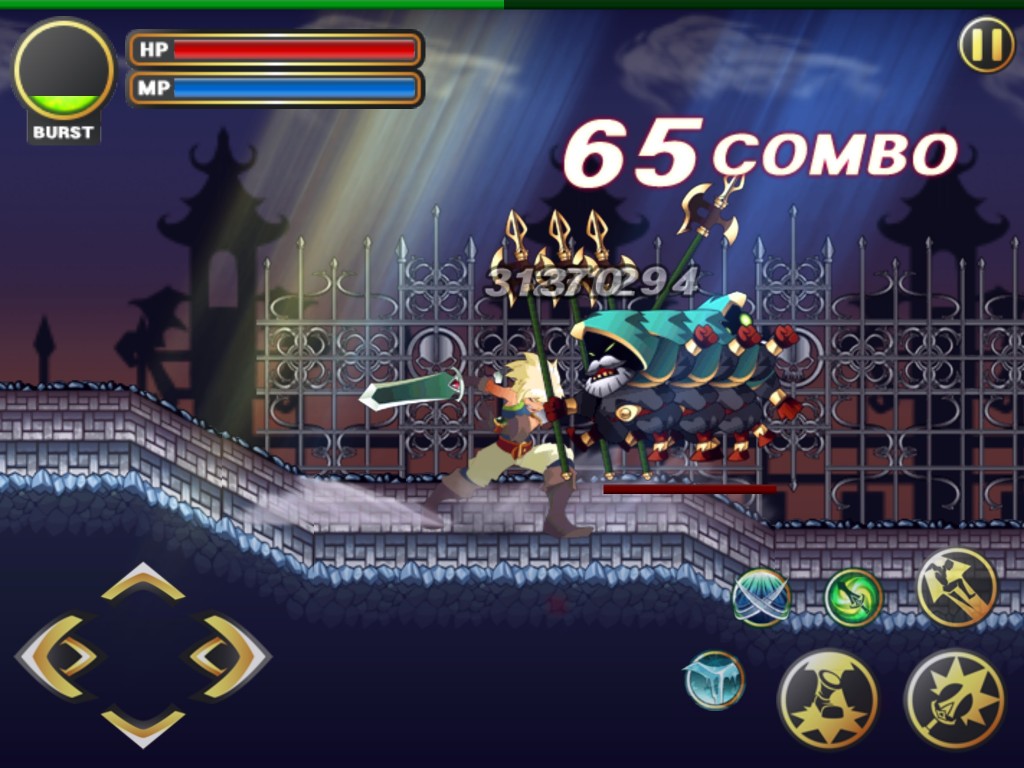 It isn’t that Arcane Soul is lacking variance in it’s visuals (though it’d be nice if you could change character appearance a bit more), but the game does not run smoothly, at least not all of the time. There are times when everything is running great, but when there are a lot of enemies on-screen, or you are using a burst/abilities — it can get extremely choppy. This is the one major problem I had with the game, as I didn’t mind the graphics as a whole. However, a few of the fonts/menus could definitely be improved, some just looked a bit pixely and outdated. You can go to the options menu and enable 30 fps mode, and then the game will run very smooth, but the default settings do not work well.

Arcane Soul is a pretty standard hack and slash dungeon crawler, but the fact you can only move left/right makes the combat not all that complex. You can have up to 6 skills (3 at the start, and 3 that can be unlocked with coins), and there is also a few combos you can unlock and execute by performing actions in a certain order. Other than that, there’s the frenzy you can activate after the gauge is full, and your HP/MP gets restored faster during that time. Enemies don’t have that complex of attacks, so combat is pretty much timing your abilities well and making sure you attack enemies before they can finish their attack. 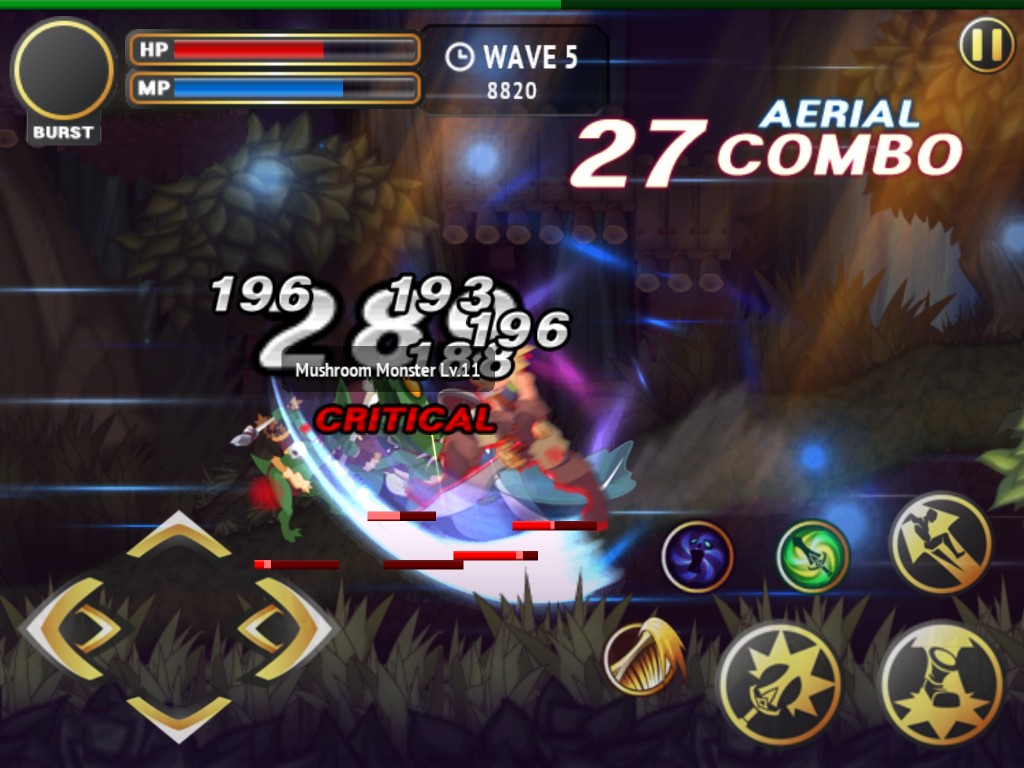 Combat is pretty fun for a hack and slash game, but the visual choppiness ends up hurting the gameplay pretty bad as well. The character customization is a big reason as to why it still passes as decent and not anything worse. My biggest issue with the gameplay, was that a lot of times it was a matter of just holding the attack button down until your enemies die; since every attack is AoE, this strategy was often the best.

Typically, a level takes between 3-5 minutes to complete, and you’ll gain XP and coins for killing monsters and completing the level. You can use coins to purchase new skills (also need to meet a level requirement), weapons, rune holders, consumables, and more. Weapons and rune holders can also be enchanted with a rune stone (acquired from playing levels), and a certain amount of coins. Overall, the only things really missing here are more armor type slots and a consistent frame rate. It would be nice if there was some sort of PvP mode, or even co-op, since you can have an AI friend fight alongside you at times.

Menu navigation was solid, I didn’t encounter any issues when I was trying to check out new gear or abilities. Purchasing items, allocating stat points, and selecting your level are all things you’ll do regularly, and they are all easily accessible. There is a very brief tutorial for each section of the main menus, which will help anyone new to this type of interface get acquainted. 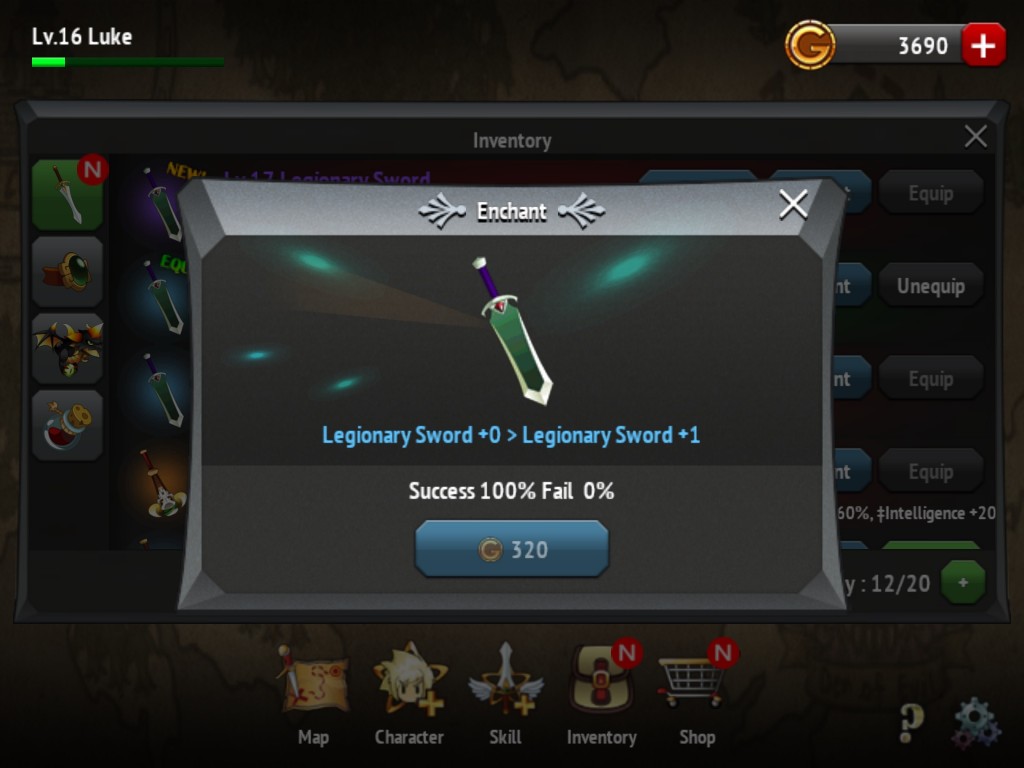 I had a few problems with the in-game controls, which were a hindrance. Most games I’ve seen lately offer the option to change up your UI, and move your buttons around — this would come in handy with Arcane Soul. For example, the frenzy gauge/button could be more convenient by your skills, rather than the top-left corner of the screen. Personally, I didn’t like the double tap to sprint movement, and would have much rather had a button that I could hold to sprint. The only real changes you can make to your UI is switching the attack and jump buttons, as well as scaling the size of all buttons.

You seem to unlock something new frequently enough that you always have something to look forward to, and always have something new to try out and master. With 25 levels in the game, you have a solid 1-2 hours of gameplay per play-through, and there are three legitimate play-throughs (one with each new character). There is also a new mode available for each act you complete, but they’re all pretty much the same as far as killing enemies over and over as long as you can — with a different underlying goal/theme. 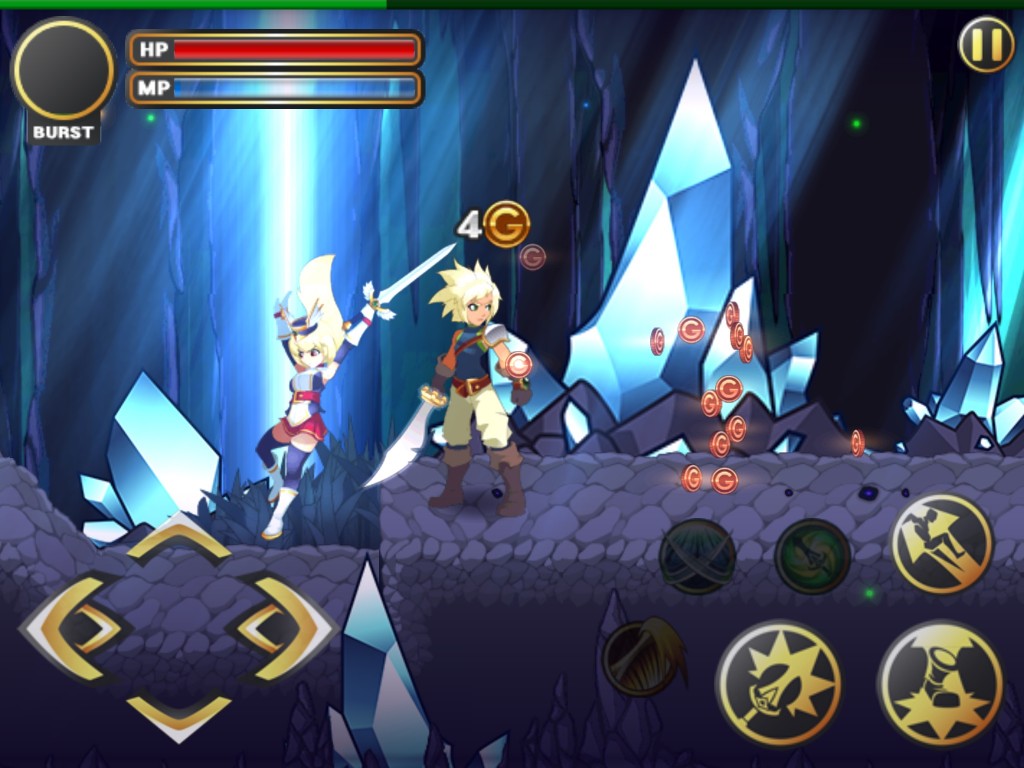 Personally, I enjoyed playing the game for the most part, and I’d recommend it to those who enjoy dungeon crawlers. It can get a bit stale at times, especially before you have a lot of mana and abilities to use, as its almost a one button game throughout 75% of the level. However, it’s fun to spend your coins on upgraded abilities and new stuff, and the depth of its character customization overall really adds to the replay value. One thing that is really useful for speeding up the pace of the game, is to spend your coins on buffs early on — these buffs can give bonus XP or damage, that will help you level up faster and progress through the game easier. Spending coins on enchanting low level items, or upgrading skills that you don’t plan on using later, is just a waste of coins.

There is definitely potential for this game to be pretty good, or at least better than it currently is. I enjoyed the overall gameplay structure, and even though there was nothing too innovative about Arcane Soul, it didn’t feel identical to anything else I’ve played. The biggest thing that needs to be fixed is the frame rate issues on default settings, but after that it would be nice to see more armor slots and new acts further down the road.

Click here to check out Arcane Soul on the Apple App Store!

Click here to check out Arcane Soul on the Google Play Store!

Make sure to join the discussion and leave us your thoughts about this game in the comment section below.