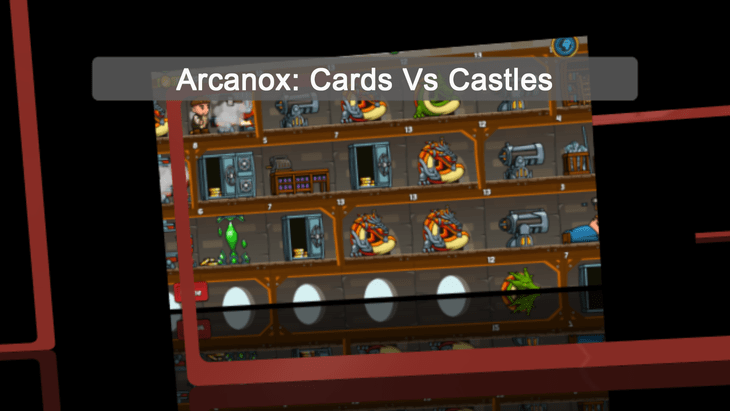 Arcanox: Cards vs. Castles is the first release of a one-man indie game studio Juhu Games, run by a German developer Christian Teister. The game is a sleek, polished delight for any fan of tower defense games and card battlers, featuring a well balanced free to play system, very good design and an addictive, fun gameplay.

Arcanox is an accessible and quite enjoyable mix of a fantasy TDs, strategy MMO and CCGs, so if you love those – give it a try. I did and got hooked for a good while. We shall write down the breakdown of what it offers – cards, tower building and upgrading, and card battling modes. 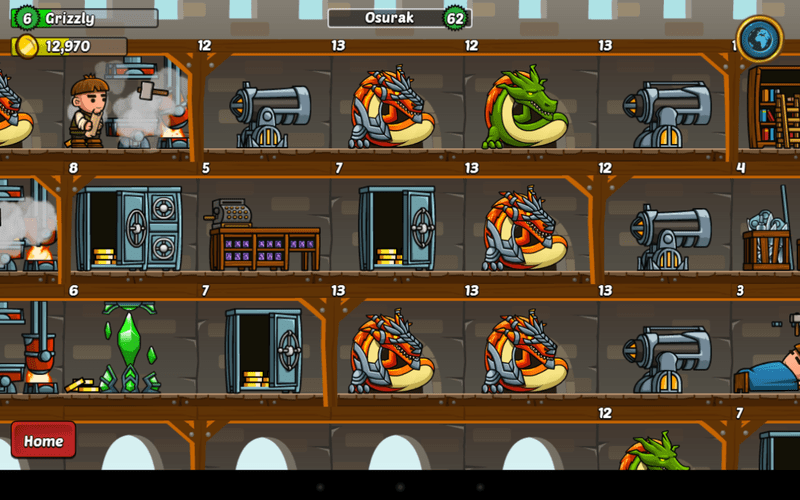 The game features over 300 minion and spell cards – witches, knights, goblins and the like. At first, you get an initial deck of low-tier cards. You can only play with six cards, so the rest will have to wait in your inventory. All cards, the ones in the deck and the spare ones may be upgraded as long as you have enough resources for it.

There is not a story as such, but the truth is you don’t need a story since the game revolves around tower offense, defense and card battling, with highly competitive multiplayer and a hard single player versus AI modes.

You are given a castle and a worker who can perform only one job at a time; you can’t queue jobs for him. At some point, though, after you upgrade your castle heart to level 4, if I am not mistaken, you will be able to get yourself another worker.

The castle Heart is a precious gem that is usually kept in one of the best protected rooms of your castle. Your castle’s level depends on its Heart, and you can upgrade it and enchant it to have more life energy, or deal damage to the enemy trying to demolish it.

The structure of your castle is linear, and has several floors, the higher your level the more floors you get, the more rooms you can fill with different items. You can build gold foundries to produce the gold coins; libraries to produce spells and cards; Card Shop to get access to better card decks and powerful upgrades for your existing cards; vaults to store your gold, various guards, traps, barricades, cannons, trappers and hidden guards.

You can upgrade each room, but there is a limit to the upgrades you can make, and it depends on your Castle Heart level, which is the most expensive upgrade, so at some point you will face the need to grind for the coins to upgrade it. Nonetheless, the grinding process never feels tedious or imbalanced.

So, there is plenty of planning on the tower building and defense field, as well as your cards upgrading. You will need to work out a perfect strategy to upgrade your structures over time, beefing up its capabilities in gold production, but also investing a lot in its defenses.

Next come the two battling modes – single player versus the AI, where you can earn Rubies (used to speed up construction and upgrade processes) and gold. The single player mode lets you play as much as you like, and the AI tries to match your skill level, pitting you against the more powerful AI opponents each time.

Each attack is fast-paced and takes no more than a minute. There is no entry fee for the single-player mode, and once you start losing the AI will offer more accessible opponents, never really making it too easy for you.

Here is how it goes. You choose the mode and then you have 30 seconds to deploy a unit. You can attack any way you like, all the castle floors at once, scattering your cards across them, or deploy several units on one of the hardest levels and see how your cards deal with the guards. Then you can see how you can deploy the remaining cards. At some point you will have a Healing card, but be careful not to deploy it before one of your characters gets exhausted by mistake.

When your cards are on the field, or rather in the castle, they move forward to the guards and traps and start attacking them. Each of your minions has a life bar and a set of magic spells or strike power, depending on their class. Likewise, each of the guards and rooms in a castle has their life bar, amount of coins and protecting magic spells. Once you slay the dragon guards, you are have much beat the level.

On the flip side, you can’t always clear all the floors, so you will be devising a strategy which floor will give you more loot and XP.

The multiplayer mode lets you attack other people’s castles, stealing their coins and even their castle heart, much like in The King of Thieves. The entry fee is 200 gold coins, and of course you can get more loot by destroying other users’ castles. The multiplayer mode also offers great variety and a way to see how other users defend their belongings.

If you tap the globe icon and go to the leaderboard, you will be able to visit other users’ castles and see where you have room to grow. The developer has obviously put a great deal of thought into crafting everything about this game, so you can even sort the leaderboard according to experience, trophies, stolen coins, Google friends.

I am not a big fan of this ‘steal from another’ mechanic, so I don’t raid other players and here is what I noticed – if you don’t play the Multiplayer, you basically stay below the radar, so other players can’t raid you. I prefer to upgrade my castle and cards to a more decent level first.

Achievements are there, in case you have been wondering, and there is plenty of them, so every now and then you will be rewarded the precious rubies for completing tasks like upgrading your rooms, or cards and others. 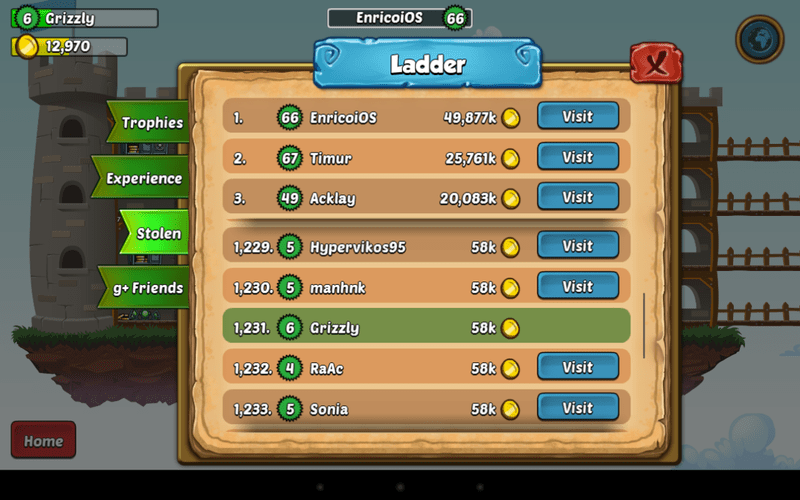 Update 29-Aug-2015. The developer definitely keeps tabs open on user feedback, and what we previously suggested as an improvement is now a reality.

First, if you take a look at our Cons section, we wanted to see a guild system. Voilà! You can now form Guilds and battle it out against the other guilds.

The recent updates have added quite a few juicy features besides the Guild system. You can now lend and borrow your decks to and from your friends, which now adds a ton of value to befriending other players.

Moreover, you can now build multiple decks, and considering the game offers some 3200 unlockable, upgradable and craft-able cards, the replay value is huge, and you can build really cool fortresses and strong decks. I must say, it’s a rare occasion for a freemium game to be so liberal in the depths it allows the players go without paying a dime.

Second, we wanted to see more variety in the cards and characters. Being able to craft your own cards, choosing its spells and skills is a ton of fun, and the newly added archers and acid-sprayers sure look fun, with quite a few added spells and 11 enchantments.

Finally, Arcanox adds Daily Tasks, which reward the players generously with gems for completing them, which also adds a ton of variety to the gameplay.

At some point, pretty fast, the AI gets tough, but never too hard to feel disheartened. On the contrary, the harder it gets, all the more addicting it gets; and when you enter the multiplayer raiding rush, you get sucked in the vortex of a digital gold fever.

The game does feature a great variety of IAPs that mainly get you rubies you need to speed up upgrades, which take up to several hours. It does not really bother you if you haven’t been raiding others and are not expecting raids in return, but if you are active in the multiplayer-verse, you will want your upgrades faster.

Overall, the game is perfectly balanced for both the paying and non-paying members, and you can even scout Google Play reviews section to get some friend redeem codes for upgrades and extra rubies. I found the game offering mild grinding and no pay-to-win restrictions. 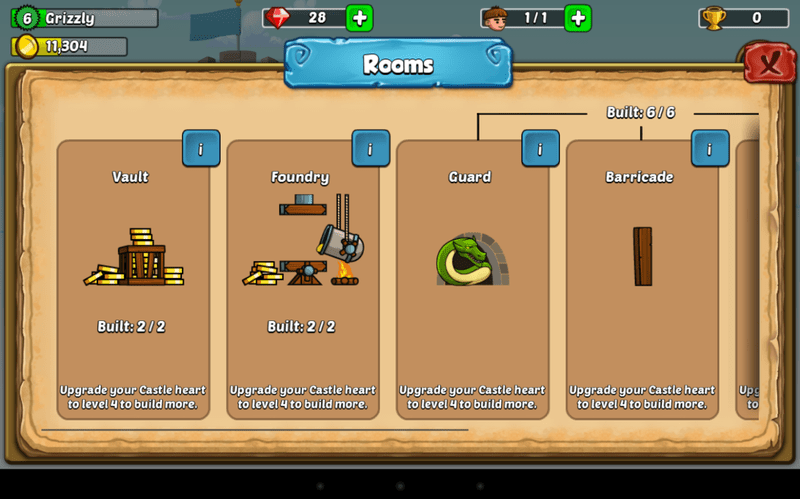 The design is appealing and sharp, and it was a neat decision to let users zoom in and out of your castles and those of your rivals when you snoop on their structures. The minions are well-drawn and fun to watch when they fight. At the same time, I wish there was more variety in their looks. Different witches, different goblins, and a few more warrior types, like the archers and riflemen would be nice just to have more minion variety.

The music and sound effects are also spot on, so the overall impressions are that of a decent, solidly built, challenging, yet accessible CCG-TD. 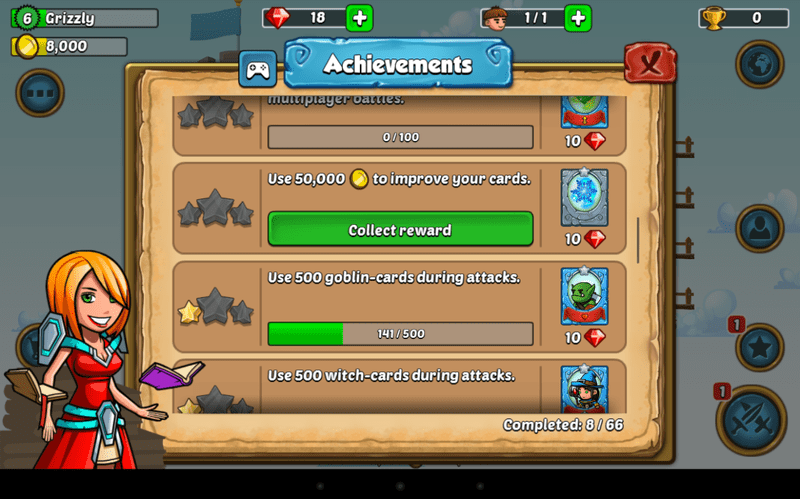 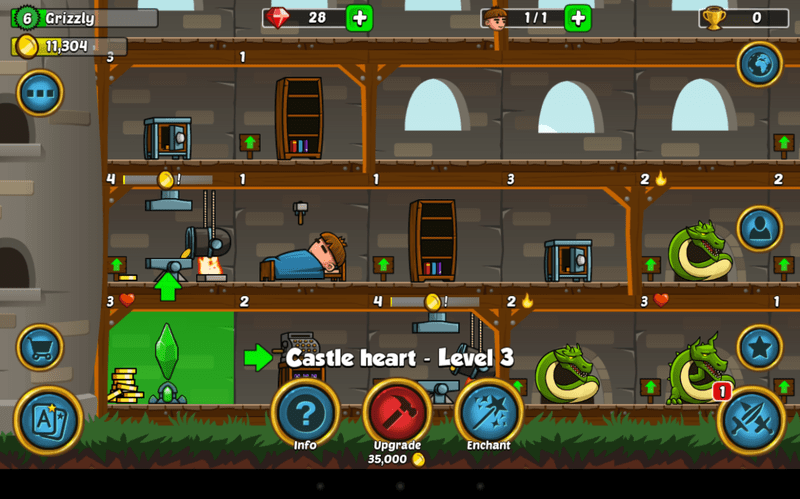 A great and well-balanced blend of CCG, TD and MMO, pardon the jargon, Arcanox is a superb entry from an indie developer, and it resulted to be a lot more than I initially expected. It is addicting, refreshing, fun to play, accessible, yet challenging because it gives you only 30 seconds to devise a plan of the attack. Its visuals are in line with what you have come to get used to in a TD genre, which makes its UI easy to navigate even for the beginners. Overall, Arcanox offers an excellent replay value, with its single and multiplayer raiding that has become so popular recently. The newly added Guilds and Guild tournaments, leagues, seasons and daily tasks add even more replay value to this gem of the MMO genre. We recommend it wholeheartedly to the fans of the said genres.