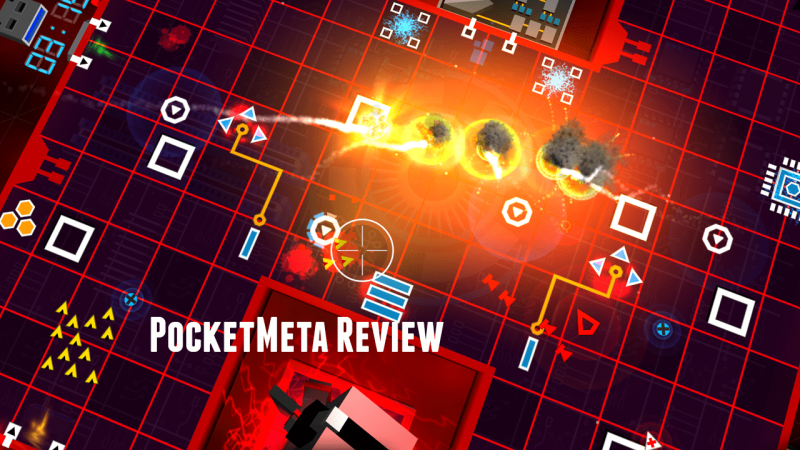 We love the indie games at PocketMeta, and today we want to bring another indie gem to your attention – Artificial Defense. Just when you think TD is dead, the indie side of the market throws in something new, unique and smart into the melting pot of the genres, and this game is a great example of how one-man indie studio creates something that the genre aficionados love.

Tower defense, offense and conquer in Artificial Defense takes place inside a computer. That’s how Tron’s wars would look like, if there was another sequel to the movie. You have a system, and you start off with a simplistic “punch-tape machine” you need to upgrade and invest RAM to build it up to become an advanced AI, with a few intermediary stages like tube computer, microchip and quantum system, molecular computer, you get the idea. To earn RAM, and ultimately preserve the existence of your system, you need to defend its servers against the incoming malicious programs.

Your moves are limited by your RAM availability. You can shoot the incoming creeps, aka malicious programs, with a large variety of weapons. You can build many types of towers to boost your RAM, or defensive strategy. You can also conquer, or re-gain, the infected elements like firewalls, databases and honeypots, which will increase your RAM. Each action has a cool down timer, and each action, be it a shoot or heal, or build a tower costs RAM you generate by killing the creeps and by building RAM-producing elements, or conquering spots.
You play on a grid, where you can see your own structures as well as the entry points of the creeps, the gates. Each gate has that special subtle lighting that indicates the type of the incoming creeps. 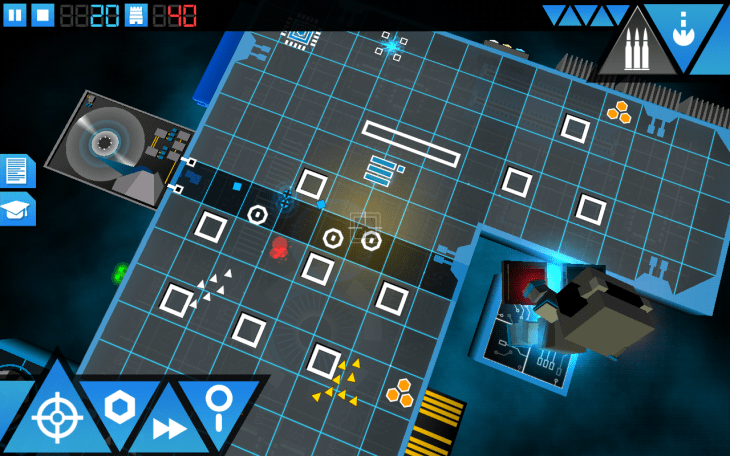 You move around the grid by dragging the grid itself while the aim is always in the middle. Oh, it took me a while to get the hang of this mechanics because the first time I played I felt too cocky to invest time into the Tutorials. 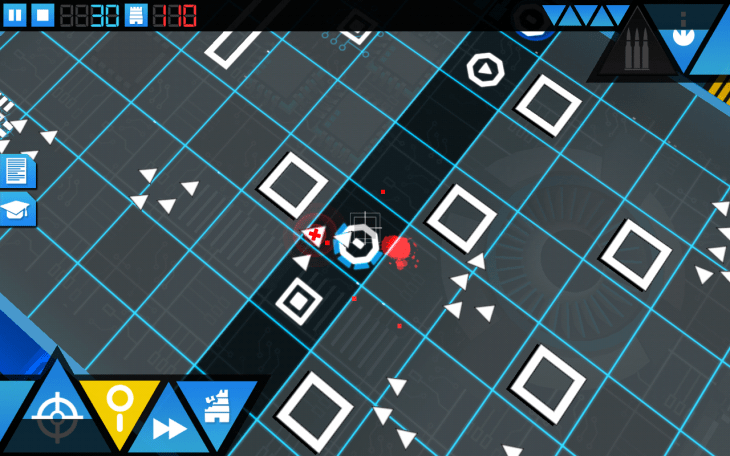 Begin with the Tutorials, seriously. Even though when you get the idea behind the controls, you still need to sort out the towers and weapons. While the weapons are quite straightforward, the tower types aren’t apparent when you don’t know the meaning of the icons. Nor do you get the idea why the digital voice keeps telling you “Insufficient RAM” when you need to perform an urgent action. So, take my word on it, and go through each chapter in a tutorial. The main objective here is to identify the units – yours and those of your enemy, as well as towers. The tutorials begin with that breakdown highlighted on the screenshots, so you know what you’re dealing with. Otherwise, you run the risk of scratching your head and wondering what the heck is going on here?

From there, you have three difficulty settings you choose manually – bronze, silver and gold. I would rate the overall difficulty of the game as high, presenting quite a steep learning curve, but worth the effort in the long run because the gameplay is enjoyable, rewarding and fairly deep. 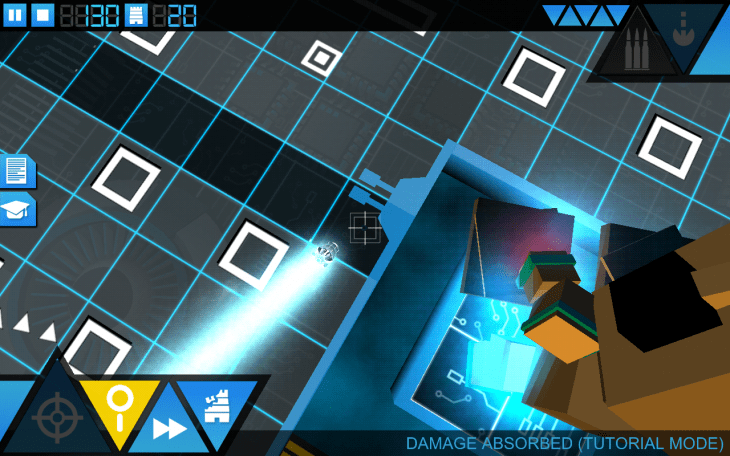 The main challenge is the aiming, and only then the strategy. The second thing I would recommend you to do, after you go through the tutorials, is adjust the sensitivity of the aim. You do so by pausing the game. Once you do, you get a window that lets you adjust the aim sensitivity to “+” and “-” values. Personally, I found the default 100% sensitivity to be incredibly frustrating. It was only when I upped the sensitivity to 400% that I felt it was right for me. Likewise, you can try to downplay it to a “-” value, which should work to invert the controls. The only nag about this system is that it’s not immediately obvious that you can or should do this to enhance the gaming experience.

One other minor issue that I have with it is how the voice feedback is important in some cases. Sometimes, I play my games with a very low volume, so I am missing on some important reports here. The problem is the digitized voice sounds like a computer mumbo-jumbo when the volume is low. 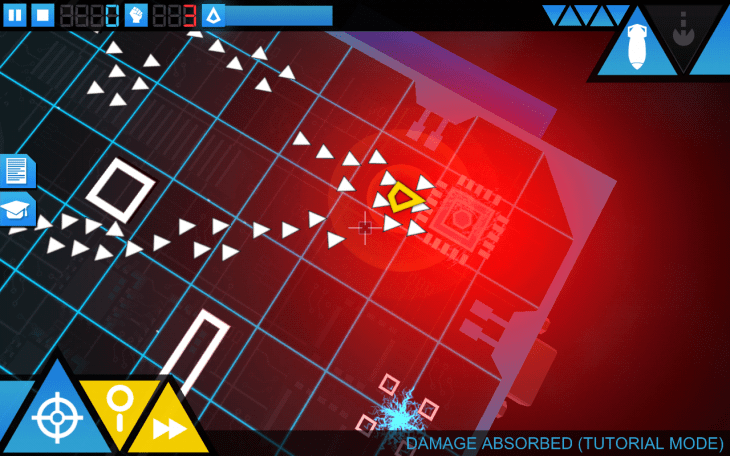 Artificial Defense features 21 offensive weapons and 21 defense towers, but the free version works as a demo basically because you only get to scratch the surface of that wealth. It’s fair, because the level of the polish, the unique mechanics, the depth of the gameplay suggest it’s a very well put together premium game. A one time $2.99 in-app purchase gives you the access to the full arsenal, provided you earn enough RAM for the upgrades, of course. No ads, no pop-ups, a global leaderboard and a stats section that shows you how well you did in the last gameplay as compared to the other players. Sometimes, seeing how bad you suck works as a motivator to keep pushing. 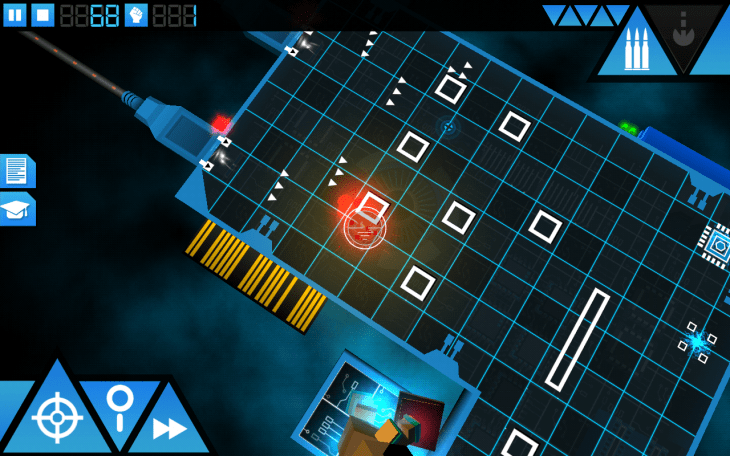 Artificial Defense looks premium. It’s polished, impressive and wonderfully sci-fi and atmospheric. Even though some items are small, it is immediately easy to tell yours from the hostiles. The blast and deploy effects are nearly-cinematic, while the soundtracks are just gorgeous for any fan of the electronic music. It’s amazing how one man can tackle all the aspects of the production, but there you have it – Artificial Defense is fantastic.

– Offense, with 21 upgradeable weapons including meteors and neutron bombs, cool down timers, and a skill-demanding aim system. Defense, with 21 upgradable defense towers like flame-throwers and railguns, 7 production towers generating RAM – tackling the balance between the production and defensive towers is a great strategy challenge. The conquering aspect of the game sees you regaining the infected databases, honeypots and firewalls – many of these will produce additional RAM for your system. At the end of each gameplay you initialize a system shutdown and the game rewards you with a performance-based amount of RAM you can spend on the upgrades. There are some 49 available upgrades, so there is room for growth for a dedicated player.
– Great design, adjustable quality
– Deep, addicting gameplay
– Three difficulty settings
– Adjustable controls sensitivity
– Zoom, fast-forward, tower delete/re-write, regeneration features
– Smooth performance

– The default controls sensitivity is frustrating and it’s not immediately apparent it’s adjustable – maybe if it was a part of the tutorial it would have been more obvious. I understand it’s an orbital-shooter, and yet, moving the grid instead of tapping a target to aim seems counter-intuitive. It adds to the difficulty, which might be a good point, but it also makes it too easy to screw up. You decide whether it’s good or bad.

– No go without tutorials – you simply must go through them to come to the grips with what’s going on. This is not a con per se, especially considering the novelty of some aspects.

Artificial Defense is an indie gem worth buying for any strategy geek. Deep, intense, fast-paced gameplay sports quite a few novel mechanics and a fairly steep learning curve that winds up in a very rewarding experience. There is no back story as such, but the sci-fi setting is very Tron-like, taking the battle to the Artificial Intelligence ground – inside a computer, with awesome graphics. Overall, it’s an interesting and refreshing take on TD, and if you have lost hope something new would come up in the niche, try Artificial Defense. Don’t forget it’s a one-man indie production, so show your love.