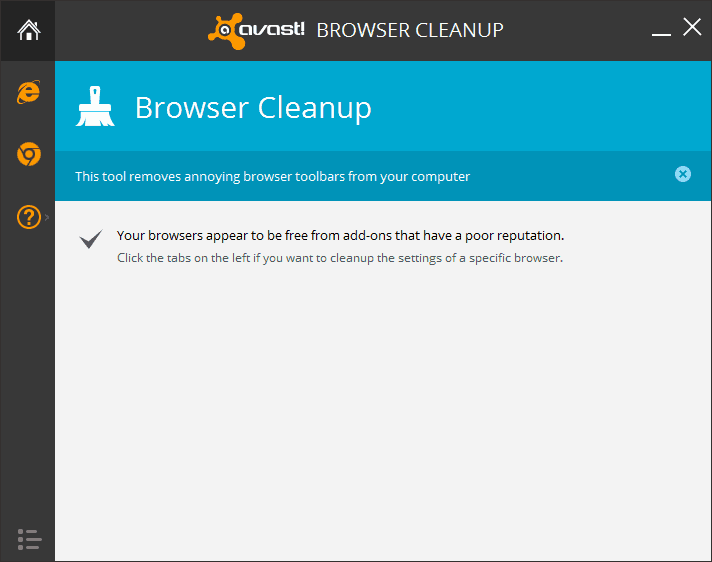 There have been a few games with the same concept of Assault: Blue vs Red, that have been successful on the mobile markets. A couple of examples that come to mind are the Gun Bros series and Zombiewood. Now, just by looking at the game, you kind of get the sense it isn’t quite at the same caliber of those other titles — but you can’t always judge a book by it’s cover. In this case however, judging by the cover might be exactly what you need to do.

I’ll say that this game won’t be game of the week, and it’s not something I plan to keep on my iPad. Fortunately, there are a handful of other games that were released this week for iOS, so be sure to check out the list!

On the whole, Assault: Blue vs Red’s graphics are nothing too special. The one thing that I appreciated, was that they didn’t re-use the maps in Campaign mode, and you get a nice scenery change several times throughout the game. However, a few of the levels are downright ugly, and use the same tile for 90% of the map. As for the frame rate, Blue vs Red runs relatively smooth, and I didn’t encounter much lag — if any at all throughout my time playing. 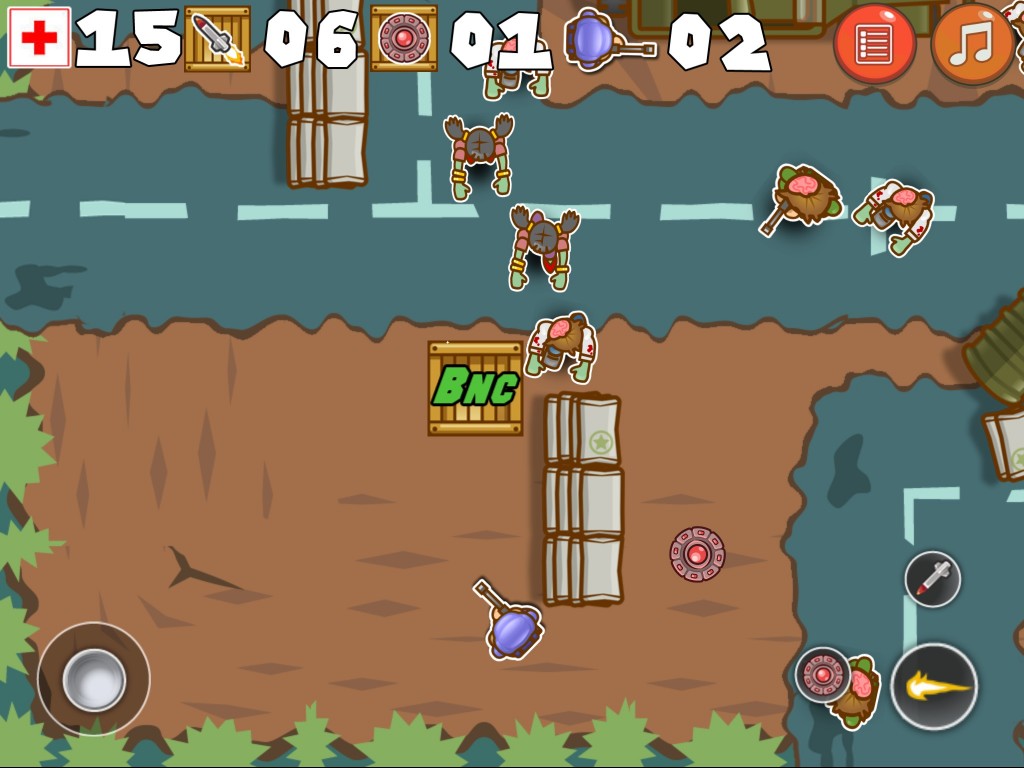 It’s not that this game is ugly or anything (at least for the most part), but there’s just a lack of detail and polishing, as well as visual variety in certain areas. You fight the same enemies pretty much throughout the entire campaign, and you can only stand looking at those little dots that emerge from your gun for so long. However, the biggest nuisance of all (it’s not visual, but I like to include some audio elements in this category), is that redundant noise that your enemies make when they die. I prefer to play games with sound, but I had to mute this one after a while.

There are some major problems with this game, and not a whole lot of redemption. First of all, on quite a few of the levels, you are spawned into enemy fire. You’re not on screen for the first couple of seconds, but any enemies in range will automatically start moving towards the area where you will be spawning, with guns blazing. Spawning was an issue throughout the game actually — since you spawn right where you die, it’s pretty easy to lose every single one of your lives by dying next to a tank (as it instantly kills you again when you spawn).

I’m all for playing a game that is challenging, but there is a fine line between challenging and bad gameplay concepts. Blue vs Red’s combat system is a major pain as well, since you have to take things extremely slow if you want to avoid taking damage. Even if the game is meant to be played at a slow pace, that doesn’t change my scores at all, since this is definitely not a game that anyone would want to play at a slow pace. 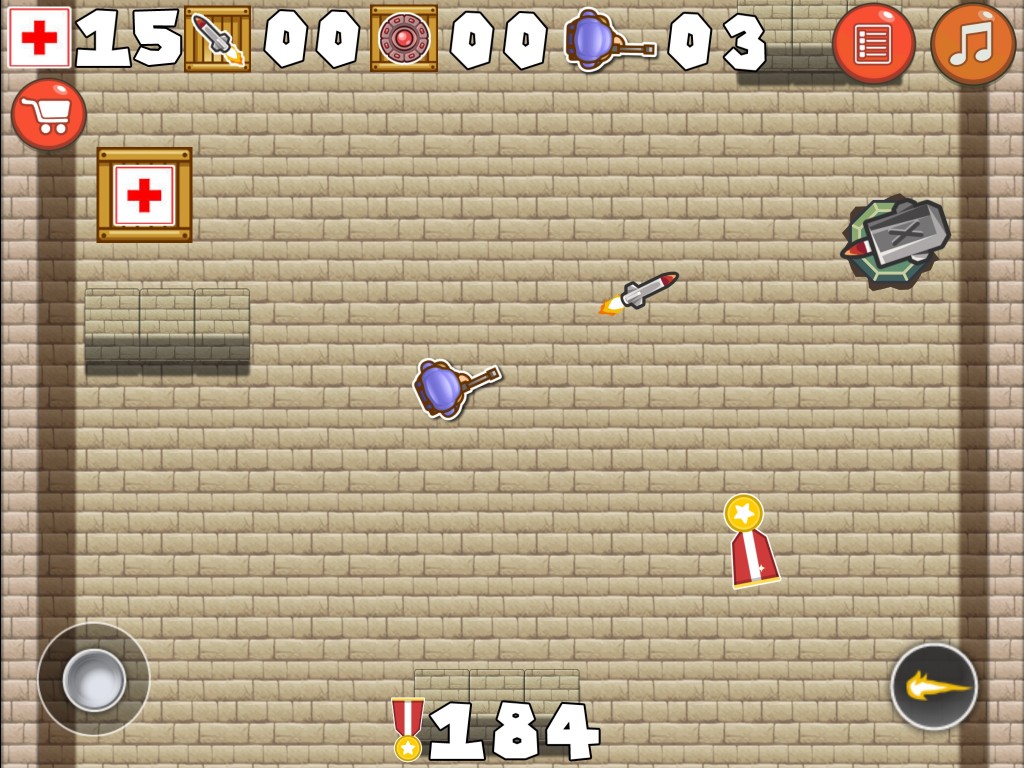 Beyond your assault rifle, you can pick up missiles and mines to help you take down enemies. The missiles are usually best saved for tanks or other vehicles, but the mines can come in handy if you’ve got a bunch of enemies coming at you and you want to run away. Other than that, you can use your medals to purchase temporary ammo/power-ups, but there isn’t a whole lot more to the gameplay.

Assault: Blue vs Red, has an unfortunately clunky UI both in-game and on the menu screens. I had to tap 2 – 4 times on the level I wanted to play just to get it to open, and nothing is really labeled well in the menu interface. Of course, there isn’t a whole lot of menu options to get confused about, but it could have been made better and more smooth. Still, menu interfaces aren’t a game changing element, but in-game interfaces can have a huge impact. 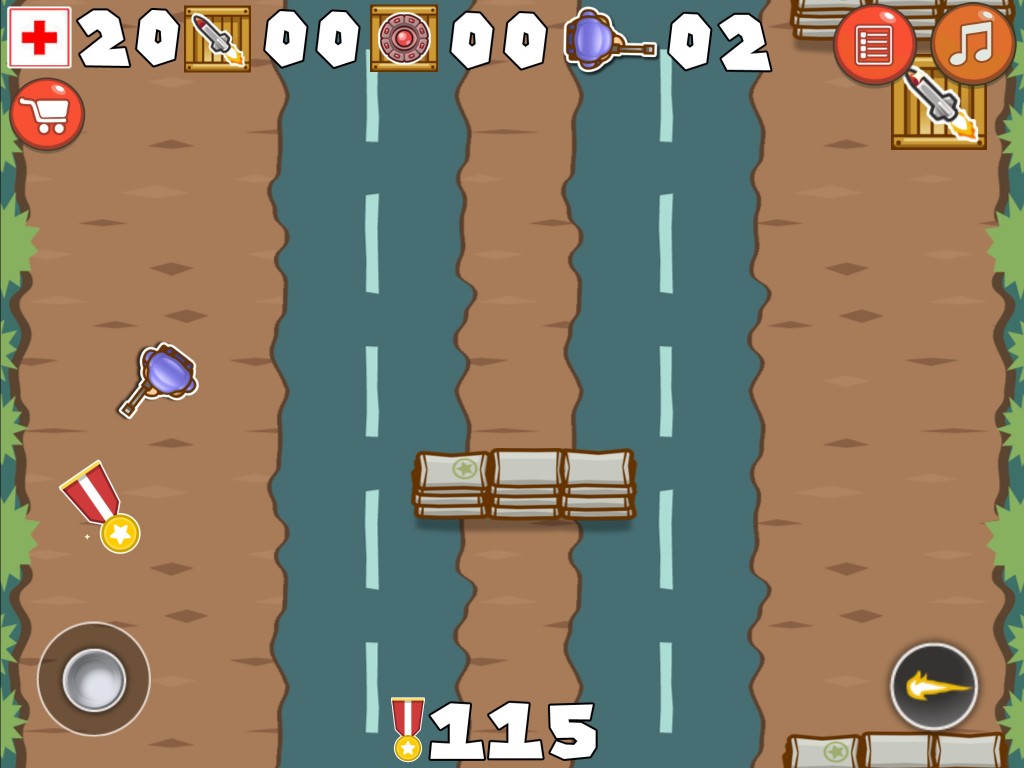 The controls seem to get stuck from time to time, especially right after you re-spawn, and like I said before it can be really hard to not die instantly when you re-spawn to begin with — so this just makes it even worse. For some reason the buttons are all pretty small, and there’s no option to scale or customize your UI so you’re pretty much stuck with what you have. One of my biggest issues, was when I tapped the small icon at the top-right screen corner that I assumed would be for settings, and it just brought me back to the menu screen and wiped my progress for the level I was on with no confirmation.

Some other issues were prevalent as well, such as the no indication of what your score is in Survival mode, even though high scores are the primary reason for playing Endless. You can go to the leaderboard section in the main menu to see your high score, but it’s simply ridiculous that it wouldn’t be on display while you are playing the game. Honestly there are more UI issues, but I’m sure you get the gist of it by now.

Players have three different modes to choose from in this game: Solo Campaign, Endless Zombie Mode, or a 1v1 duel where both players play on the same device. To me, this is a healthy mix of game modes, and with most games it’s enough to merit at least a 4/5 in Replay Value — when those modes are executed properly.

Like I mentioned before, the Survival mode doesn’t display a score until you check the leaderboards to see what your personal high score is (which means if you didn’t get the high score, you don’t even know what you got). Because of this, I found myself not even wanting to mess with it again. The campaign offers 14 different levels, but they are all pretty frustrating due to the poor gameplay mechanics. You can crank up the difficulty to make it even more of a chore, but I’d recommend against that. 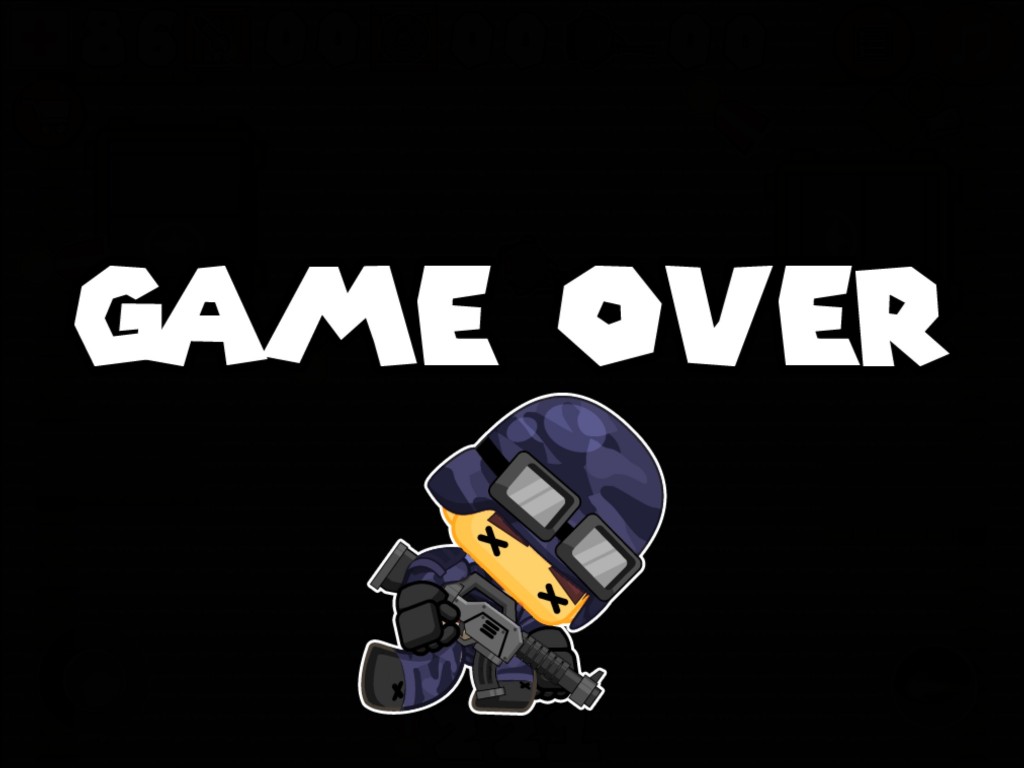 Unfortunately, this is a game that would appeal primarily to casual mobile gamers, except there are so many ridiculous elements that make it much harder than it should be — therefore casuals won’t want to deal with it. I really can’t see any situation where someone would be wanting to play this game for more than an hour at most, and that’s a really bad sign.

Although there is a good change of scenery throughout the campaign, the “good” seems to stop there. If it isn’t gameplay woes making you frustrated, it’s the poor UI, or the constant “arghh!!” sound you hear when you kill an enemy. This game needs a lot of work, fine-tuning, and polishing. Unfortunately, the developer has already stated that the first major update is going to include new levels and enemies, but no indication of bug fixes or gameplay changes.

Click here to check out Assault: Blue vs Red on the Apple App Store

Let us know what you thought of the review by leaving a comment in the discussion area below, and make sure to share this review via our social media outlet buttons below.