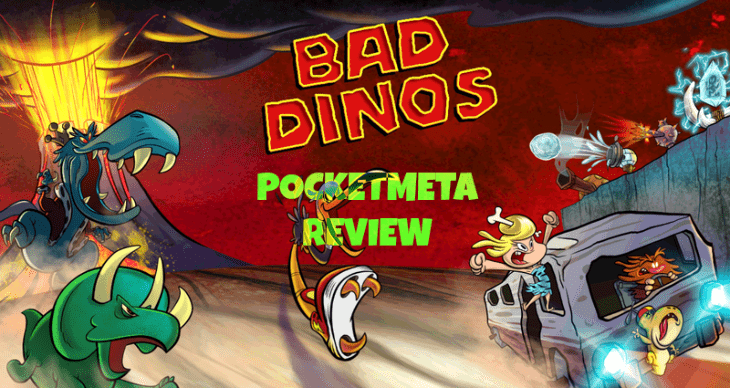 Tower defense genre is over-saturated, at the very the least, and tired. The developers blend it with other genres to bring a breath of fresh air into the gameplay that becomes boring to the genre aficionados knowing all ins and outs. Insomniac Games is an AAA developer knowing the strong and weak points of a good TD game on mobile. Their new game Bad Dinos is a $3 premium mobile title, and I played it for the past week to make up my mind about whether it’s worth a purchase. If you are on the fence and looking for an in-depth dig, bear with me.

You are in a prehistoric era that feels like its dwellers have been abusing the hot tub time machine. A Flinstone-ish family living in a camper is continuously under attack from flocks of dinosaurs. And so, you use the towers and weapons appropriate of that age to build your defense lines around their camp and save the family in each stage.

There are several types of turrets you can build, but as prehistoric as they are, they still work the same way the other weapon types in other TDs do – some shoot and throw stones, others slow the enemy down. Every turret can be upgraded, depending on how many upgrades you have unlocked per each. Once you start slaying dinos, your bones count increases, which gives you the necessary resources to build and upgrade more turrets. 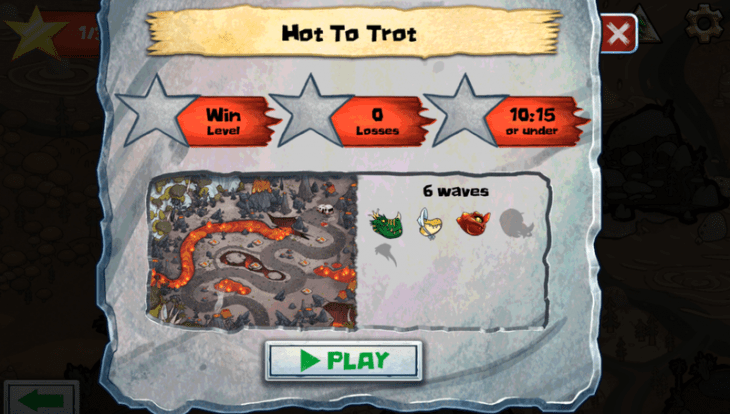 Besides the turrets, you have four types of super-weapons with cool-down timers. The muddy puddle slows the enemy down; the arrows button summons a mighty Viking with Icarus-like wings who throws spades at the enemy from the sky, singing Wagner’s Valkyrie opera. A predator-looking plant can be placed among the enemy – not sure what exactly it does, but most likely intoxicating them with its odor, or something. Then comes the net, and with it, the best part of the game – dinosaur-capturing.

Bad Dinos does take a fresh twist on the genre allowing you to capture weak dinosaurs by throwing a net over them. Thus, you need to keep an eye on bigger species and catch the right moment when you can capture them. The point is every incoming enemy has the energy meter that goes from green, yellow to red. You can only capture dinos that are nearly dead and blink in red. A second’s worth hesitation and your net captures nothing but bones, but throw it too soon and you will miss the opportunity and will have to wait till the cool down timer for the net ticks to zero again. 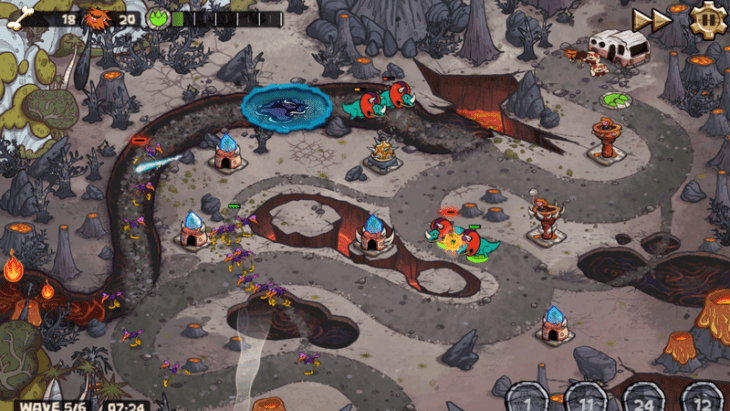 The best part about the game is being able to capture the dinos and wait for the appropriate moment to unleash them onto the enemy. You need to capture the medium and big dinosaurs; the small ones get eaten by those. There is one particular king dinosaur – a green fat beast with a golden crown. It’s got a big energy stock, so it’s the hardest to capture, but it’s worth a fight.

At some point, you will have to upgrade your abilities, and each has four stages of upgrades. Inevitably, some levels will be hard to beat if you ignore the tedious micromanagement part. Not to say it’s overly complicated, but micromanagement tweaks are boring to me by default, chipping away from the fun of the gameplay.

Another neat feature of Bad Dinos is a changing map – once in a while you will see a volcano icon on the map. When it reaches the red color, the landscape changes and the dinos find a new way in.

See how the map changes
1 of 4

To a certain extent, this changing map and the possibility to capture dinos constitute the core of the fun factor in Bad Dinos. At the same time, the gameplay does tend to get a bit boring at times. Nonetheless, you do have a fast-forward button, which lets you watch the action and react to it in a more lively fashion.

There are plenty of levels, and you can potentially play and replay them to get a three-star rating in all, but the question is – will the game get you hooked that much? I have been hooked for a few days only. 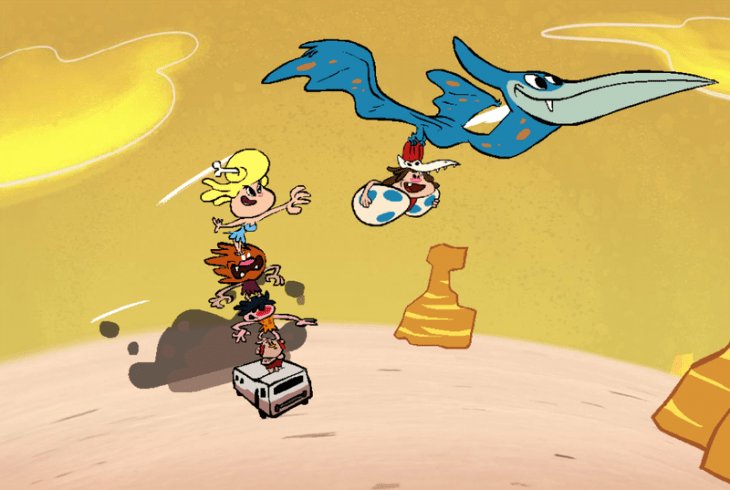 Everything about Bad Dinos visual style and music is polished. The style is a familiar Flinstones tale, with vibrant colors and humorous depictions of both humans and dinosaurs. I loved the great level of detail in the imagery, and if you look closer to notice these little funny things, you will appreciate them, too. The sound score is pretty entertaining, if somewhat repetitive.

The funny cut-scenes add to the visual variety, so do the different types of dinosaurs that get unlocked as you advance through the levels. Besides possessing different characteristics, the dinosaurs look cute, funny and bring a lot of diversity and fun into the gameplay.

The menus and the in-game UI are very intuitive and there is practically zero learning curve for a newbie, but when your map gets populated by turrets and dinos, it gets difficult to select the item you really intend to select. Sometimes, a net or a puddle would land not exactly where I’d tapped and it would make a difference. Besides the screen getting a bit too cluttered for my comfort level of perception, I have no issues with the UI. I guess complaining about having to tap two times to upgrade a turret is pointless since it’s the way it is for the majority of TDs. On the flip side, I can whine about being unable to relocate a placed item, which is somewhat restricting. 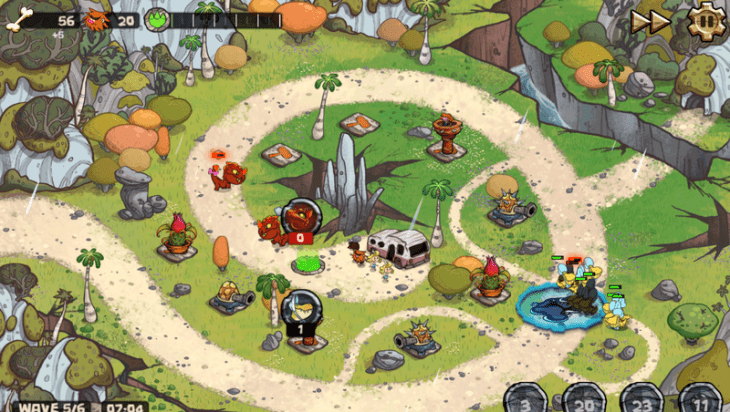 I haven’t read any performance reports on the iTunes, but I have found them on Google Play, and truth be told, have experienced a few lags and bugs myself. The first time I tried to load it, the game refused to launch. Restarting the device helped. Once in a while, it would freeze when loading a new level. Again, force-closing the game sometimes would fail to solve the issue while rebooting the device worked. 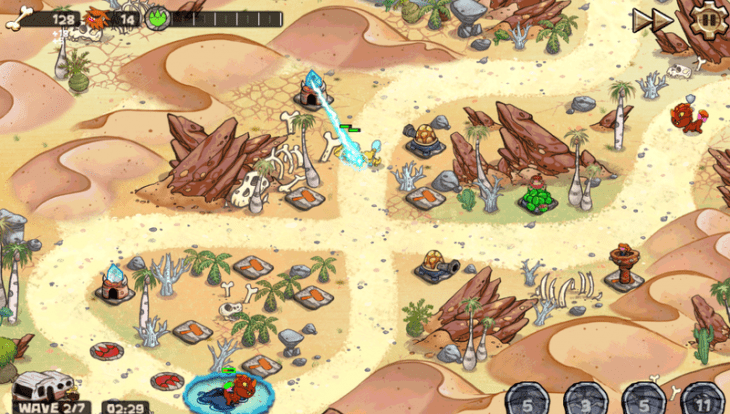 Bad Dinos by Insomniac is a solid tower-defense game with excellent production values, a premium price tag and no IAPs. Its visual style is vibrant and hilarious; the dinosaur-capture mechanic is a welcome breath of fresh air in the tired genre. So is the changing map that makes for an additional challenge. Other than that, however, the game is a rather traditional tower defense that doesn’t break away from the old cliche. If you like the genre, you will most likely enjoy the game, but will not find anything groundbreaking about it. In other words, Bad Dinos is moderately good, but not fantastic.