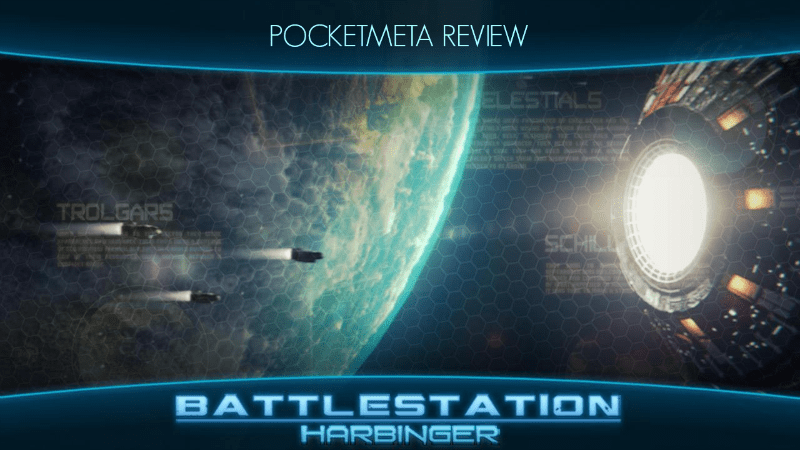 I was on an escort mission, peacefully floating through the myriads of stars, warping through the vortex of the space matter. My assault drones were scouting the area for hostiles, as we chit-chatted with the commander about the pending missions. The slo-mo space travel seemed so laid-back. What an illusion! The next thing I knew was we were outnumbered by the hostiles in the next sector, and their stats against mine were overwhelming. Not too long into the hopeless battle, I saw the warp map getting highlighted – we can flee the battle! We made a daring escape back to the safe sector only to realize our enemy followed suit. The battle was imminent. 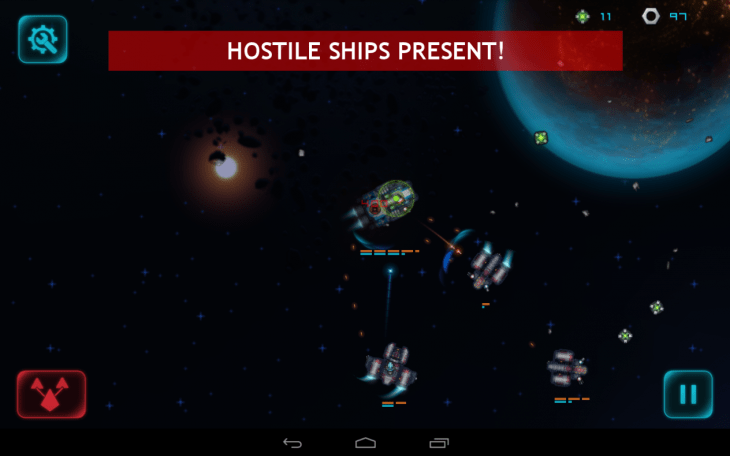 One of the best parts about Battlestation: Harbinger is the liberty it grants the player in his or her choices. You can choose whatever tactics you see fit for the situation at hand, including flee as many battles as you can. Yes, the stats are definitive, but they don’t have to be your doom. But let us see what this new game from BugByte is in its entirety.

I reviewed Harbinger’s predecessor Battlestation First Contact, and loved every bit of its 2D graphics and space shooting strategy. Now that Harbinger launched on Android and iOS devices, I am impressed and deeply hooked on it, too.

The catch with Harbinger is it takes a few gameplay sessions to get the real taste for its style. At first, it seems like a very hard to beat micromanagement space strategy. Hard because you die, and it’s permadeath. But then, as you retry time and time again, you begin to appreciate the randomly generated maps, the unlockable ships with a variety of upgradable modules, the in-game currency that implies no IAPs, and the freedom of choice in the strategy and tactics you can implement in every battle. 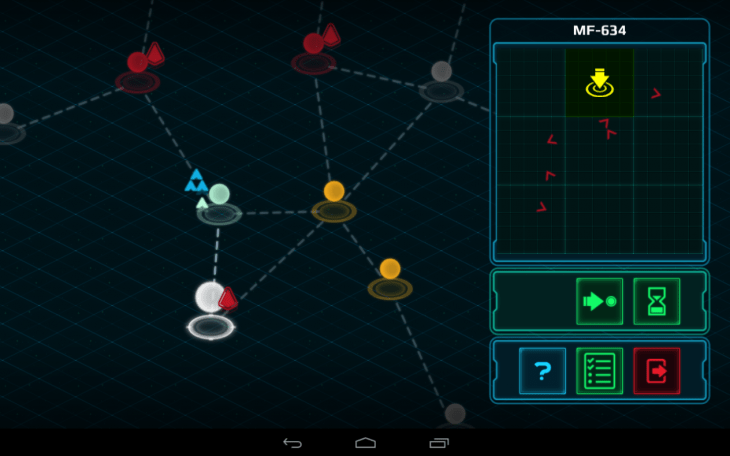 You start out with a fairly simple Tutorial that shows you where you can choose your spacecraft, how to add modules to it, where to get your party ships, where the missions come from and how to navigate the map. If you feel confident, you can even skip the tutorial because the UI is very straightforward and intuitive, especially for the fans of FTL and Out There. By the way, the influence of these games is strongly present in the gameplay, and yet, it’s not a clone, but a standalone game with a strong personality.

Once you are done with the intros, you have three modes to choose from – Easy, Normal and Hard. You have a variety of ships in your hangar, but all but one are locked. You need to level up till level 3 to unlock the next ship, till level 5 to unlock yet another one and so on. 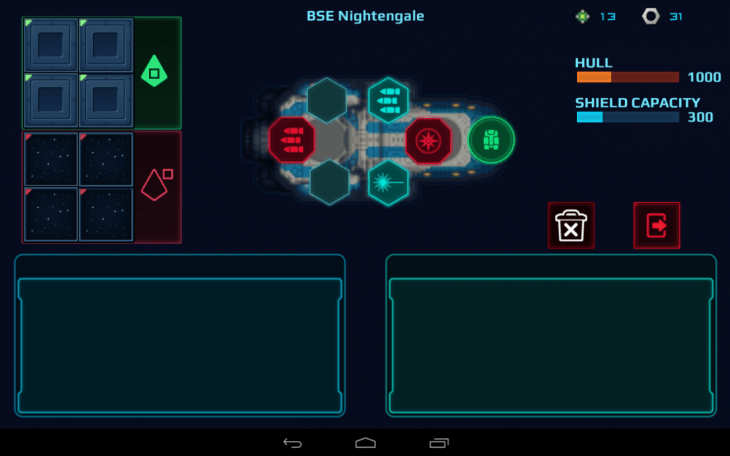 Once you take your first bird on a battle mission, you will get the hang of the simple constants in Harbinger. For example, there are sectors with the stations, and repairing your ship there does not cost you a thing.

Each spacecraft differs not only in the looks, but also in the amount of modules and their specs. For example, some ships can have drones, others cannot. Likewise, some are faster, others are slower. Some allow for several upgrades to a module, others only one.

The variety of weapons may not be that advanced, but you have just enough to make the choice that will determine your play style for this particular ship. For example, there are lasers, energy cannons and projectile cannons, but nothing compares to a nuclear blast. However, the latter has its disadvantages – the reloading times and the aiming, which can be eventually enhanced through upgrades, let alone the price. 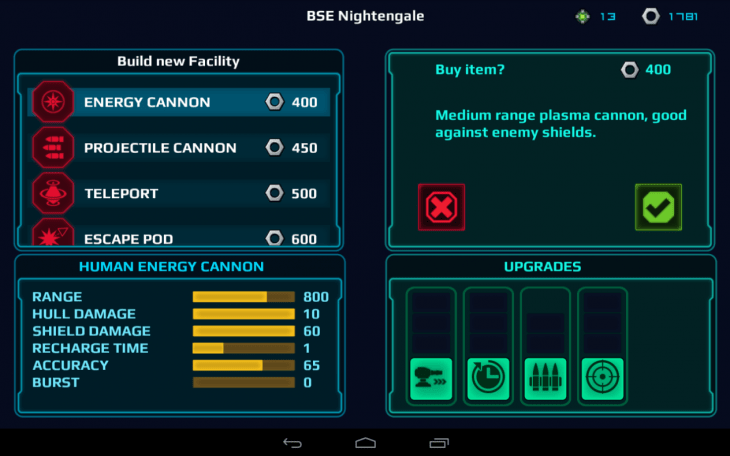 You can also buy the accompanying ships, thus assembling an entire fleet of your own. These ships come in a variety of scouts and assault ships, so read the descriptions carefully before buying. Don’t just spend the money on any available ship the moment you get the funds. It makes little sense buying a scout ship when your main ship needs upgrades in fire power. You get the idea.

The upgrades also require some careful planning because you will see which parameter gives you the most advantage when upgraded (aiming, reload, shield penetration, etc.). 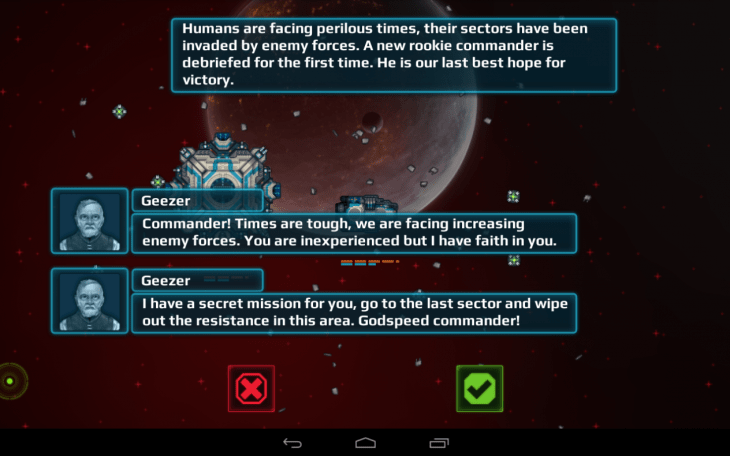 As I said, the maps are randomly generated for each replay, and you don’t know what awaits you in the next sector except for a few red arrows on the mini map. This is the preview that gives you some basic info about the number of hostiles and their ship types – thin arrows stand for small fighters, fat arrows stand for large ships.

The maps look like chemical elements, with molecules bond in an intricate pattern. In theory, you can auto-jump to any sector where your mission leads you, but in practice your auto-travel will be interrupted by the sectors filled with hostiles. So, you either auto-travel by clearing out the sectors that are on your way, or carefully choose your own path, zig-zagging and wiggling all over the map, trying to stay alive and complete the mission. 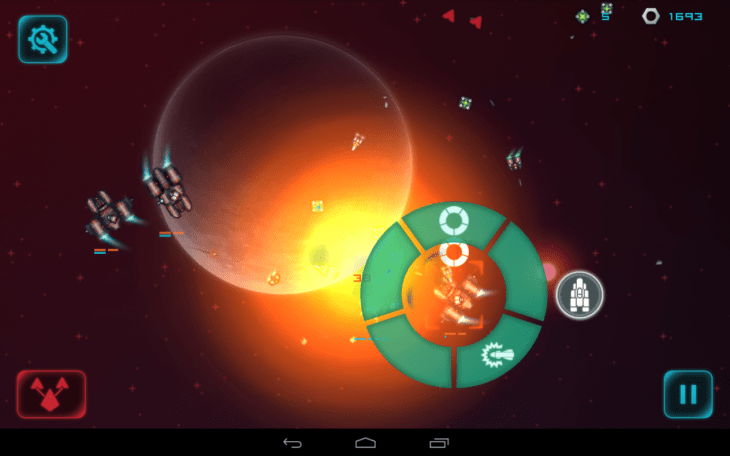 Notably, you don’t just accept the mission and follow through with it. Missions are sector-based, so you accept or reject them as you happen to visit their respective sectors. The same is true about the completion – there is no particular order. You can complete a second mission faster than the first one, but escorting missions do suggest some urgency. Because you know… your protege can get killed before you make it to the destination, if you take too long.

On the other hand, the missions are not central to the gameplay mainly because they do not define your gameplay style, but also because they seem to lack variety. From what I’ve seen, they come in two types – clear a sector from hostiles and escort a ship to a sector. But as I said, it’s not the missions, but the adventure that counts. 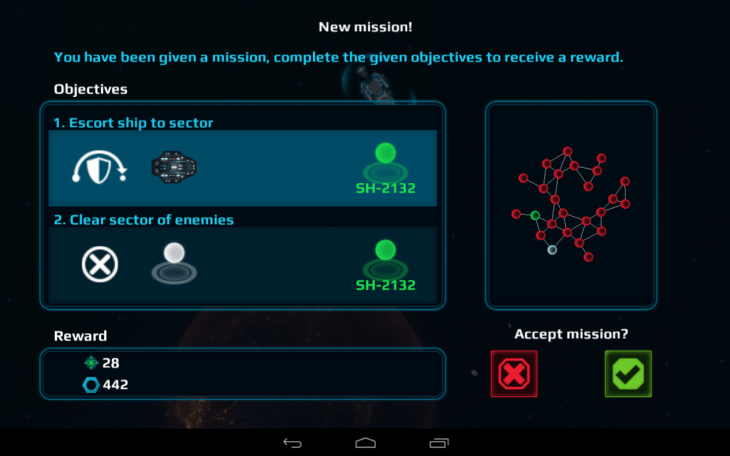 Since the number of modules is limited, you need to plan your battles and escape routes carefully. Do you need an escape pod so that when your ship is toasted you can jump to one of the party ships? Or, would you like to have two nuke modules and wipe the enemies into space dust? Is there one particular upgrade that makes the weapon ten times more effective than any other upgrade?

These little details are worth discovering, and it makes the gameplay so much more interesting than just clearing the sectors. 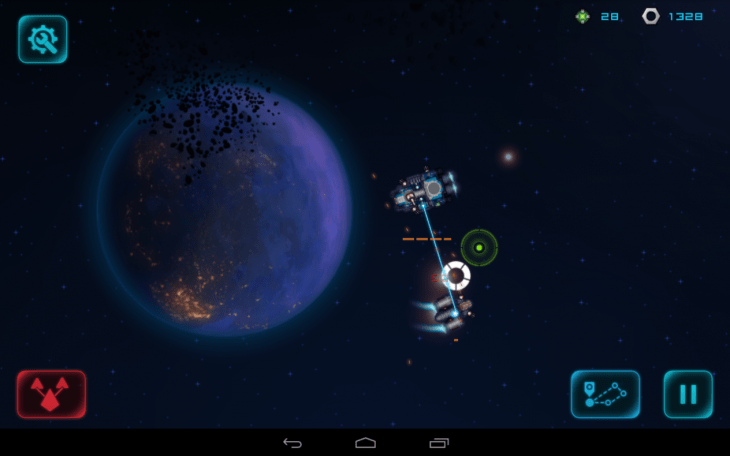 This is odd, and it may be used as a cheat. If you play two hours straight in the easy mode, upgrade your ship to its maximum capacity, clear many sectors and grind lots of loot, but then perish, you get a meager addition to your account’s XP meter. This means you have to play several days just to get to level 3 and unlock a new ship. However, if you play on Hard, choose no modules and go empty-handed into the battle, you die of course, but you also get a significant XP boost and unlock the level 3 ship in 5 minutes.

The harder the difficulty, the more is the reward, the more ships you will be able to unlock eventually. But if you want to play longer, advance further in the map, you might want to explore the easy and normal modes. Either way, the three are not that different in terms of gameplay, but offer an interesting deviation play style-wise from one another to want to explore them. 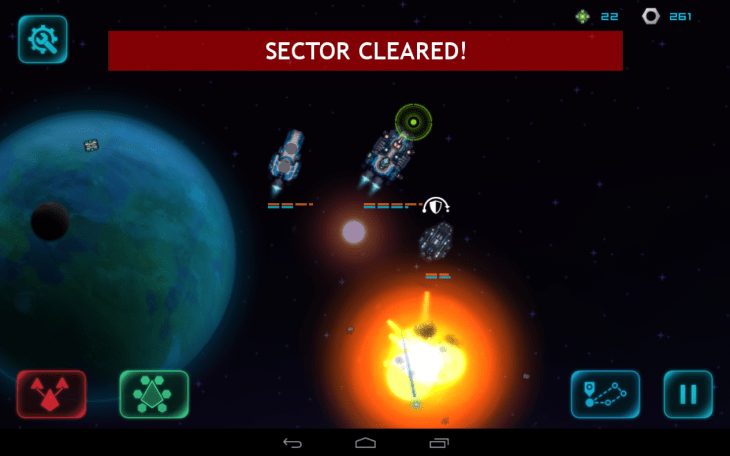 Harbinger is an atmospheric 2D space trip. Strategy and exploration blend in a curious rhythm that is at times trip hop and at times frantic, but the peculiar spirit of a sci-fi adventure is preserved at all times. Sometimes you are slo-mo floating, the next moment you are clubbed to death, or your enemies explode in a spectacular blast. I would not say the artwork is using its full potential, though. I would like to see more variety in the external appearance of the ships, like the one we could see in the Out There, pardon the comparison. It would be nice to see them coming as if from different races and different civilizations, with more colors and weirder shapes. This would add extra motivation to unlock them all.

I would also make the warp screen more vivid because the current one is uninspiring. These little things aside, the battle scenes look mesmerizing – the slow pace and the inevitability of the fatalities create scary scenes. It almost makes you want to sit back and watch it, but then you remember if you do nothing you are as good as dead. This cold shower – hot shower contrast adds even more spice to the gameplay. The music is amazing. 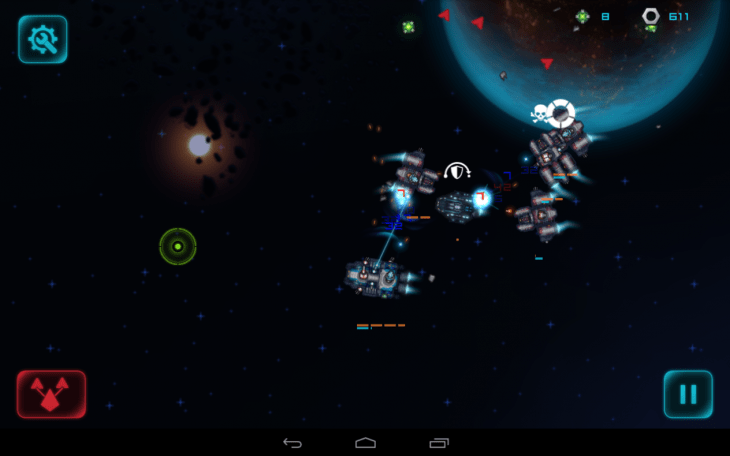 None, it’s a one-time premium purchase. Taking into account the gameplay, addiction factor, variety, and replayability, as well as the artwork and the very feel of a classic, old-school real-time space strategy done right – it’s a worthwhile purchase. Battlestation: Harbinger is a worthy investment for the right player. Sci-fi – check; real-time strategy – check; replayability- check; beautiful 2D design – check; atmospheric soundtrack – check; randomly generated levels – check; freedom of play style choice – check. It’s not too difficult, so a newbie to the RTS genre can pick it up and learn the basics while the hardcore player will enjoy it to its full depth. You might even want to boast off your 10k+ score on the Harbinger forums, if you have what it takes. At the same time, the game has quite a potential to grow into an even bigger adventure with more story, alien spaceships and characters. Seeing how the developers keep tabs open on the user feedback, we might see some of the user feature requests made reality in the upcoming updates. The game forums are lively with questions and strategies, so it’s a live, supported game with awesome present and an indefinitely fun future.

Disclaimer: PocketMeta got a courtesy copy of the game from the developer BugByte for the review purposes, a fact that did not affect our judgement. The opinions expressed in the review are as usual just that – personal, fairly objective, made through the prism of individual experiences and preferences. You get the idea.