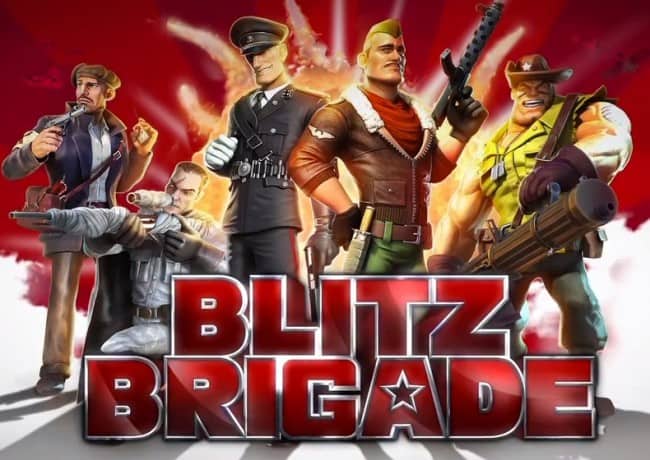 Gamelofts take on ‘Team Fortress’ on the mobile platform.

Prepare yourself for an enjoyable gun show between Axis and Allies, as they duke it out for supreme victory in this mobile FPS Showdown. If you’ve ever played Valve’s Team Fortress 2, you should already know what to expect with Blitz Brigade. It’s a competitive online first person shooter that pits two teams, Axis or Allies against each other in standard FPS modes like Team Death Match, Capture the Flag or Domination. When the game was first released back in May of 2013, it had gone through a series of rough patches due to connectivity issues. With several updates to improve connectivity and gameplay, we’ll take another look at how this mobile shooter. So lets lock, load, and roll-out as we dig in to how Blitz Brigade measures up today. 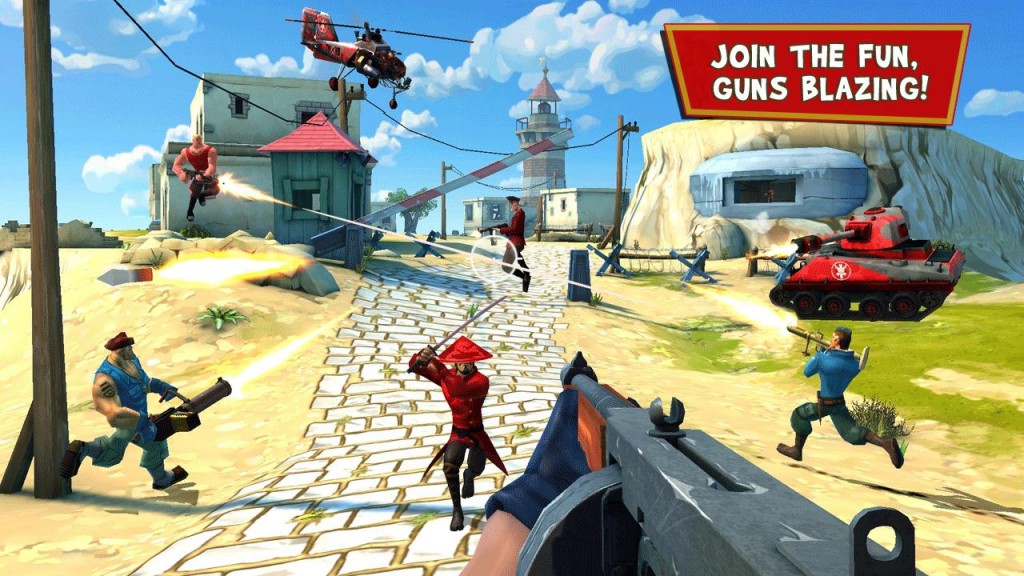 Blitz Brigade divides up gameplay between two campaigns: Multiplayer and Training. Training consist of several single player missions, where you’ll either be stationed at a post gunning down enemies, flying a helicopter gunning down enemies, or snipping from a roof top, gunning down enemies. The idea sounds repetitive, but it’s surprisingly enjoyable, each map has certain bonuses like puzzle pieces or crates that provide some kind of bonus. You also receive in game currency and rank up the first time you complete each mission, I found it to be an enjoyable experience, while increasing my skill and earning coins to purchase updates. Some of the training missions can become quite difficult to complete with 2 or 3 stars, which you need a certain amount of stars to advance to the next stage. This can involve you re-playing some missions to get a higher score to move onto the next stage. This wouldn’t be so bad if you received other awards for doing so, but once you’ve completed a mission you won’t get any more coins or XP from it.

Multiplayer is really where the game shines and is truly its main focus. There are five classes to play is in multiplayer: Soldier, Gunner, Medic, Stealth, and Sniper. You’ll start the game with Soldier and Gunner classes, and you’ll unlock the other classes as you level up in the game. Each class has a plethora of primary, secondary, and melee weapons in their arsenal. There are weapons in each category that you can either unlock by leveling up and purchasing with coins, and specialty weapons like the Pigeon Launcher which you’ll need a higher value currency called gems to buy. Each class has their own Kill Signatures, Taunts, and Greeting messages which you can purchase and change. To sum it up, there’s plenty of customization and upgrades to keep you striving for more.

Where the multiplayer fails to be all that it can be, is the selection of maps and modes. It has 3 standard FPS modes and only 3 maps with a max of 12 players to each match. To spice the competition up a bit, Blitz Brigade also offers full-scale tournaments that happen several times throughout the month, providing big time rewards for top players. Honestly, the 3 game modes and tournaments would probably be enough to satisfy most mobile gamers, but only having 3 maps total to choose from is pretty disappointing, and is probably the main reason the game can become repetitive. Each of the 3 maps are well designed with, drop crates, vehicles, and stationed gunning points, but it still leaves you wanting more once you’ve reached rank 10. What really gives players the reason to play, is mastering different classes, unlocking their favorite weapons, and the feel of being on top of the competitive edge. 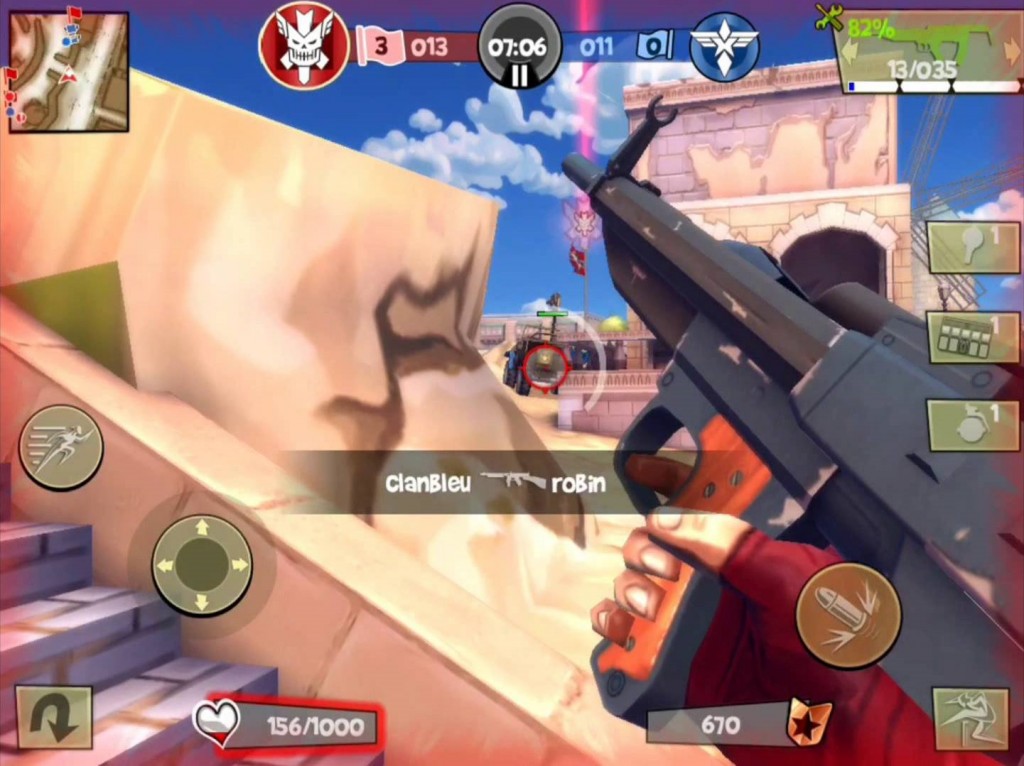 Let’s be honest, controls are a big deal in mobile gaming, and Blitz Brigade does a good job of balancing controls to work well with a touch display, without losing the functionality of a PC or console FPS. The game uses a slight aim-assist in multiplayer that helps even newcomers find their target. The assist doesn’t overly ruin gameplay by holding your hand either, managing to deliver important headshots can be more challenging than usual, and overall you need to aim relatively close to your target to get a soft-lock on them. You’ll have buttons for sprinting, jumping, firing, turning around, specialty items like jet packs, and a joystick for movement. You can aim by moving your finger on any blank part of the screen, and I didn’t have much trouble with accidentally firing off an action by accident. Blitz Brigade has one of the best controls schemes out there, if you’re not a fan of it, FPS on mobile devices probably aren’t for you. 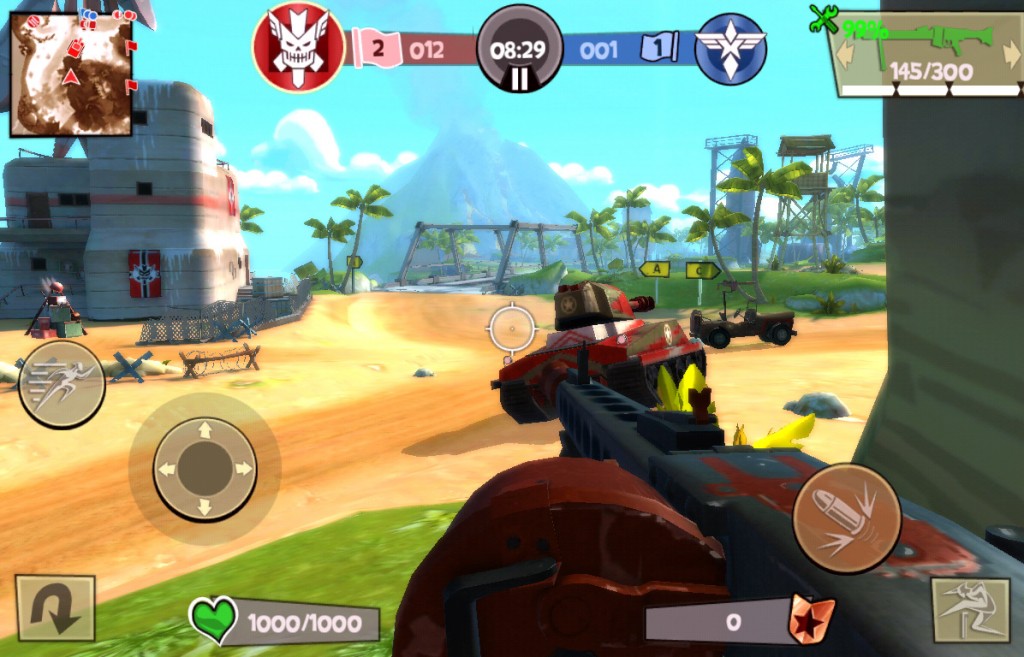 The overall look of Blitz Brigade takes on a look that you would see in a military adult cartoon. All of the models look colorful and well designed, each of the classes have their own quirky style to them. The game does a good job to make the environments, characters, guns, and vehicles all look like they belong together in the same universe. Effects like lighting, shooting, and explosions all come off with the same 3D cartoony style. The art style may not be for everyone, though I encourage you to try it out, because I normally don’t get too into cartoony graphics myself, but this one I found to be very visually appealing to the eye. 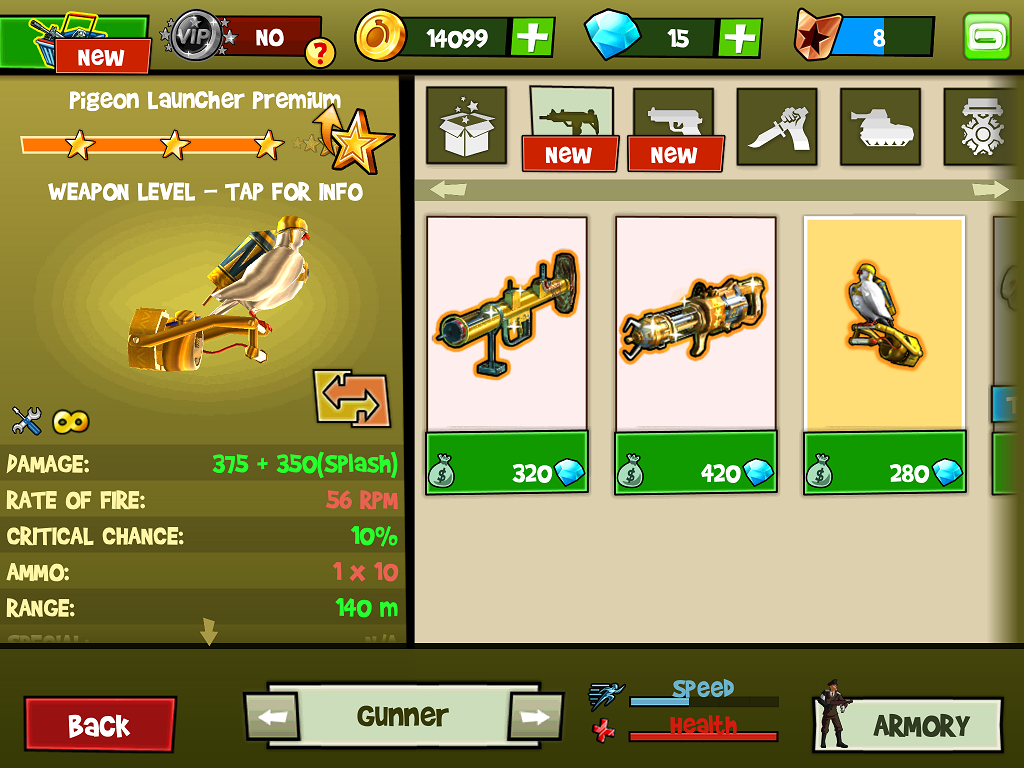 In-app purchases are defiantly a big deal in game like this, and it generated a lot of controversy over it. You’re able to to purchase plenty of advantages over the free players with things like, faster respawns, better weapons, upgraded equipment, as well as more.  I shared the same concern prior to playing this game, I mean how could it be fun if some guy with the most money always wins? It’s really not, and there was a few times where I found my team being pummeled by a single overpowered soldier. Overall though, I still felt that the key factor in the game revolved around skill level, I made a effort to not make any in-app purchases in this game, just so I could see how well I would do without any additional advantage. Currently I’m rank 10 and have a Kill/Death ratio of 2.11, that’s pretty good for those of you who don’t know, especially in a game with matches that consist of 3v3-6v6. I do think they could tone down the type of in-app purchases, but over all the game is still completely playable without spending a dime.

Blitz Brigade has provided one of the most enjoyable online FPS experiences on the mobile platform, it provides quick loading times, and a competitive edge that keeps you engaged. The game ultimately falls short, with a lack of maps and game modes. The in-app purchases that give players a definite advantage can feel a bit cheap at times, but overall doesn’t destroy the overall balance of the game. The game also offers several avenues to earning in-game currency without throwing down hard earned cash, through winning competitive tournaments and using the ‘earn gems’ option. If you’re looking for a straight-forward online FPS, that will provide enjoyable, but competitive gameplay, Blitz Brigade is worth giving a try.