The killing spree in mobile gaming rages on as Google Play receives a highly anticipated Android version of Bio Inc. Biomedical Plague by DryGin Studios initially released for iOS. If by looking at the screenshots, or the title, you think it is a Plague Inc. copycat, you are wrong. Although, the two games are alike, Bio Inc. takes a different twist on biological murder. The most horrifying aspect of the game, though, is not the gameplay, but the fact that it is addictive. I cannot, being in my right mind, say the game is enjoyable. It is sick, perverse and creepy, yet intensely addictive and gruesomely fascinating. Providing an unlimited replay value, it will make it to your ‘keep it’ drawer alongside Plague Inc.

The premise is murder. The player has to kill a single person by deploying diseases on him and evolving his bad habits, as well as bombarding his resistance. There is not much customization in term of personalizing your patient. The only thing you can do is give him a name, which is ‘John Smith’ by default. I had to figure out a way not to feel guilty when playing, so I chose to think it was Hitler. My girlfriend suggested women can name their patients after their ex-boyfriends. Guys don’t have that ‘luxury’ since the patient is always male, with the same voice. 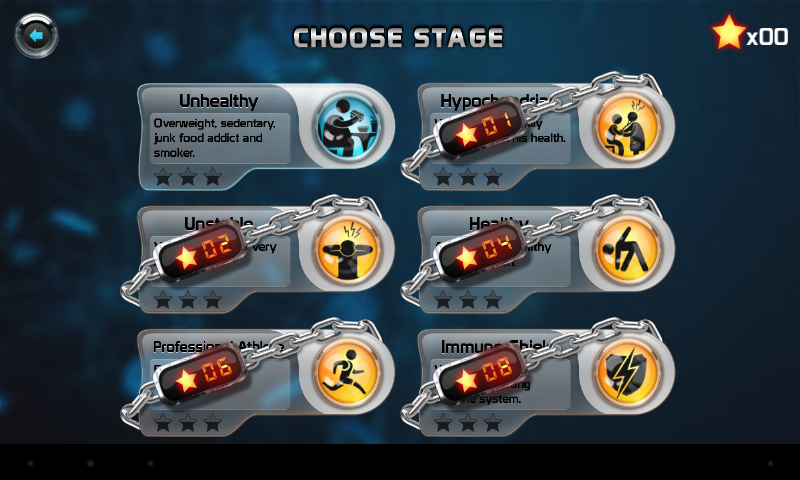 Occasionally, you will hear the patient cough, sneeze and moan, but you don’t see his face. Instead, what you see is a 3D model of a human body via 7 filters for each vital system – circulatory, respiratory, nervous, muscular, renal, skeletal, and digestive. The respective tabs are on the left and you can switch between them.

The patient contracts viruses and infections on his own from time to time, and they are displayed as mucus-like spiky round balls in his body systems. Your aim is to collect them to increase your Bio Points. The latter are the in-game only currency that lets you attack the patient with different diseases, evolve his symptoms and suppress his resistance.

Since your aim is to kill the man, you will face counter-action. As soon as the doctors start treatment, the countdown timer to full recovery starts, and from there, you are playing against time. This may or may not seem fair because a nearly dead man can just resurrect from the dead because the timer outrun you, but these are the rules.

If the recovery gets to 100%, you lose, patient lives happily ever after. 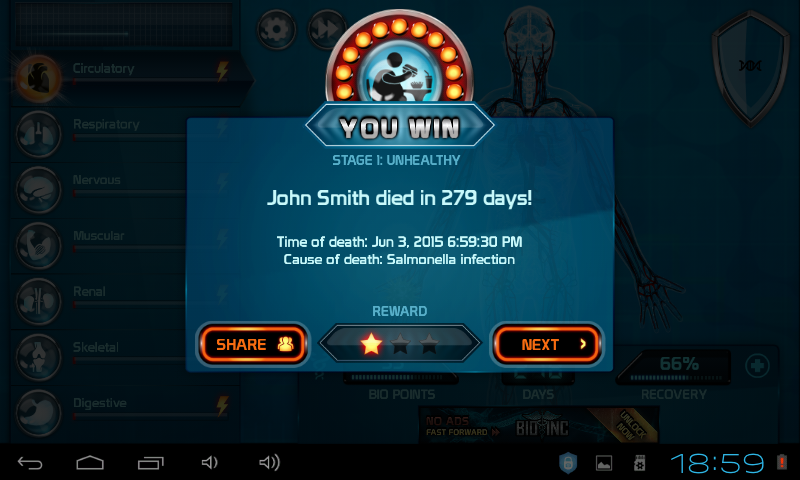 First of all, before you begin you can choose difficulty level, or stage, and there are 12 of them, each requiring a certain number of stars to unlock. You gain stars by playing previous levels. Each stage has three difficulty levels – mild, moderate, severe. The first level is super-easy, and your patient is an obese guy with a sedentary lifestyle and addiction to junk food and smoking. 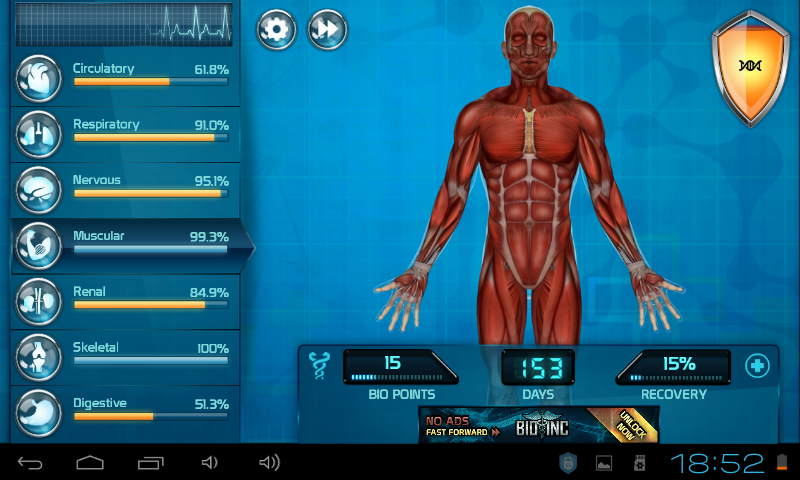 The main panel displays the 3D body model and seven vital systems you can switch in between to collect bio points. At the bottom, you have the bio points count, number of days you have been torturing your patient and recovery progress in percents. At the top right corner, there is a shield that displays your patient’s defense, and when tapped, it takes you to your lab. 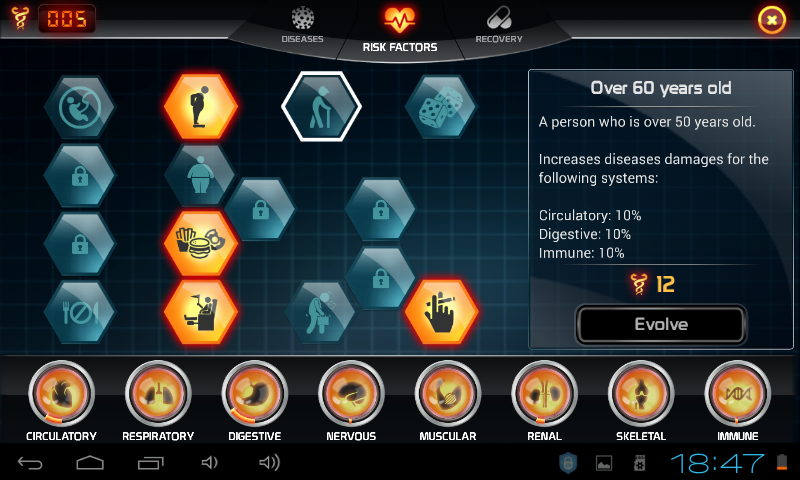 The lab has three main tabs at the top – Diseases, Risk Factors and Recovery. At the bottom, you can switch between the seven plus one, the immune, vital body systems. Each system can be viewed in the disease tab, and you can choose to deploy various lethal viruses and infections on your patient.

You do not invent or evolve the diseases. On the contrary, the game features a slew of known and deadly diseases – from salmonella to cancer, from insomnia to dementia and more. Each minor disease unlocks more serious ones you can deploy once you have enough bio points.

The risk factors include malnutrition, obesity, smoking, alcoholism, and much more. The resistance tab lets you make your patient paranoid about the doctors, or substitute real meds by placebo, medical incompetence and more creepy scenarios, like bad luck.

Bio Inc. looks awesome. Besides the great 3D anatomy tutorial, every detail of the design looks polished to perfection. If anything, it’s a graphical delight. The sounds are nothing short of creepy, yet the overall atmosphere of a game makes me think of the World Health Organization scientists who work on deadly vaccines and Ebola outbreaks in their perfectly sterile, hi-tech labs. The game does convey that impersonal, diabolic atmosphere where you do not see patients as people – they are just numbers on the screen.

I have to praise DryGin for fair approach to in-app purchases. There is no in-game currency you can buy for real money. A one-time IAP takes away the ads and unlocks the fast-forward button. A simple and elegant solution.

If you enjoy cancer and diarrhea as game elements, Bio Inc. has some to offer. The game puts you in the shoes of a Nazi doctor deploying deadly diseases on faceless men, one by one. Beautiful design, realistic 3D modeling and a variety of stages provide for weeks of gameplay, but the rules are somewhat unfair – the countdown timer can rescue a senior patient with several deadly diseases and systems collapsing, which annihilates strategy value. Overall, it is a great game, but the moral implications take away the fun factor – there is too much dehumanizing value to it, and worse yet, players don’t seem to realize that.