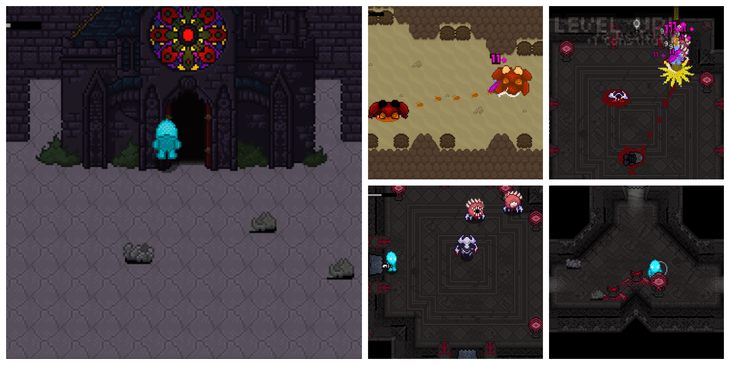 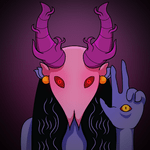 There have been tons of affection when the first bit Dungeon launched last year. The same wave of praise follows along the second iteration, but I feel a bit confused. The game is tons of fun, don’t get me wrong. However, I seem to have stumbled upon several rough edges that cut off bits and pieces off of the fun pie. Or, I may assume it’s just me not liking particular elements of the gameplay. Here are my pros and cons – in detail and in bullet list below.

I like a good story behind the gameplay, irrespective of the genre. Roguelikes and dungeon crawlers must have a story to legitimize all the crawling, and even though this may sound like a blasphemy to roguelike fans, a retro style does not mean you can skip on the story. Bit Dungeon II gives a dry summary of the story in the description, and an even drier element of the plot in the gameplay.

You play as a naked neon ghost, well you start off naked, in the static overworld filled with all sorts of devilish creeps. Your beloved’s grave has been desecrated, and now her soul knows no peace, so you set off on a killing, that is ghost-killing, spree to bring her soul back to her grave. 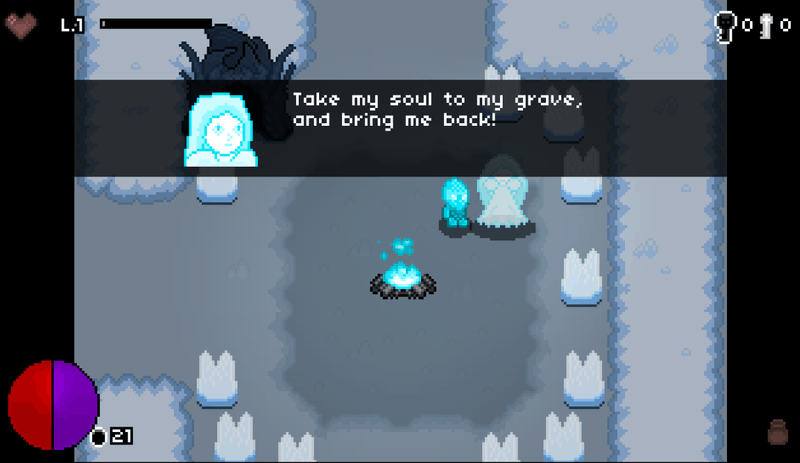 In other words, another damsel in distress, in this case a dead damsel, sends you on a “mission impossible,” where the cost of death is no more, no less than your immortal soul.

That’s pretty much it, as far as the story is concerned. You may exchange a phrase or two with a boss character that would basically shed no light onto the story, and they don’t speak much anyway. 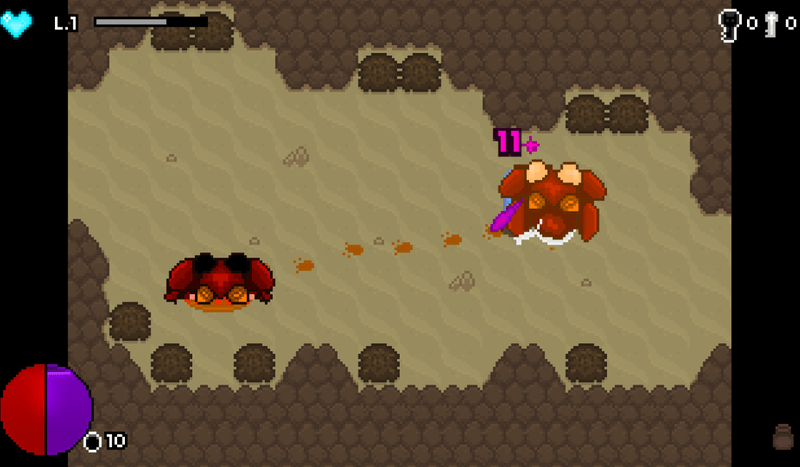 These old school-based retro dungeon crawlers like to throw you in the middle of a hostile environment without any instructions. Many hardcore gamers are specifically after that freedom of exploration and discovery, so here you will enjoy figuring out what to do. The same is true about the controls – go figure out how to play.

You walk from one scene to another, and the locations are typical RPG areas – dungeons, churches or castles, beaches and forests.

The first time you launch, or each time you die and restart, there will be a Shop in the nearby cave – make sure to drop by and take an ax or a knife, or a spear, whatever that suits your playstyle best. The coin you have is just enough to buy one weapon. 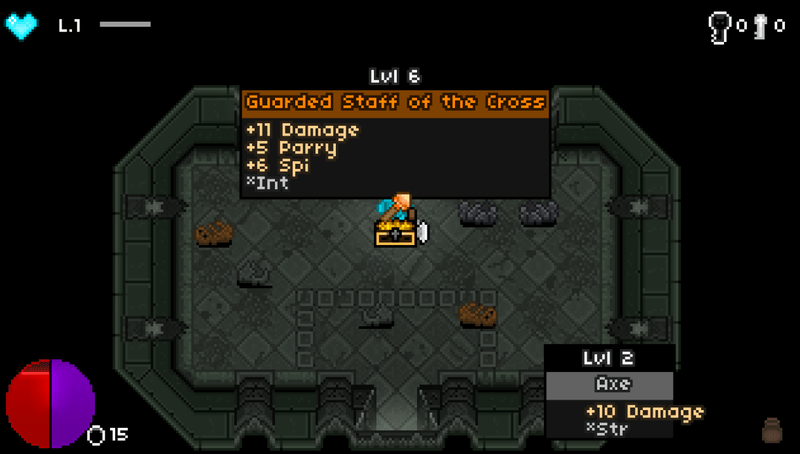 The next thing you should pay attention to is the campfire – spending some time by its side will restore your powers. Also, when you tap on the campfire, you will see your character stats.

Speaking of powers, you will see a circle at the bottom left, divided into two halves – Red and Purple. The Red half shows your life forces, the Purple – the Mana needed to cast spells.

Then, you start wandering from one scene to another, fighting the creeps – ghosts, crabs, lava wolves, mad knights and the creatures I could not immediately identify as anything I’ve seen before. In this regard, bit Dungeon II is excellent – the monsters are gorgeously disgusting and highly annoying. 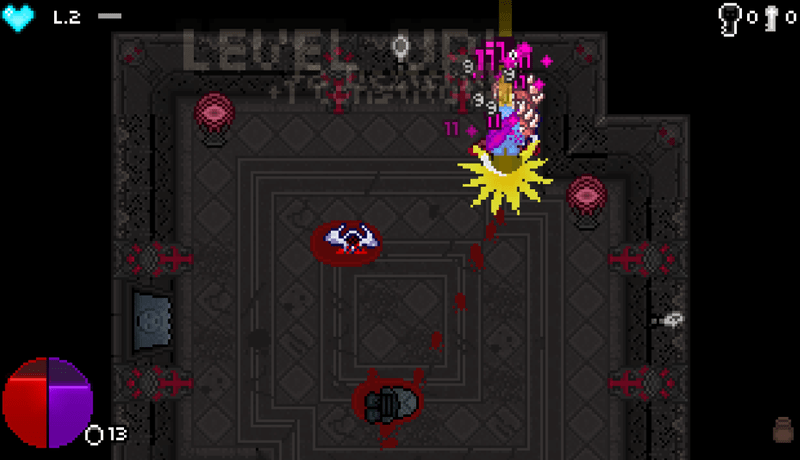 When you die, you lose your soul in the dungeon you died, and the next time you start over, you need to find it to get it back. Each time you die, you have to start from scratch, and here come the two elements I find confusing.

First, you die and start from scratch, but you retain the loot, weapons, coins and spells you found in the previous gameplay. This is not a bad thing, after all, and each time you restart you have a chance to make it further because you are stronger. However, about an hour into the gameplay, you will be able to resurrect as a really strong ghost that does not meet any significant resistance from the enemy part. This can be either fun, or disappointing, depending on your preferences. 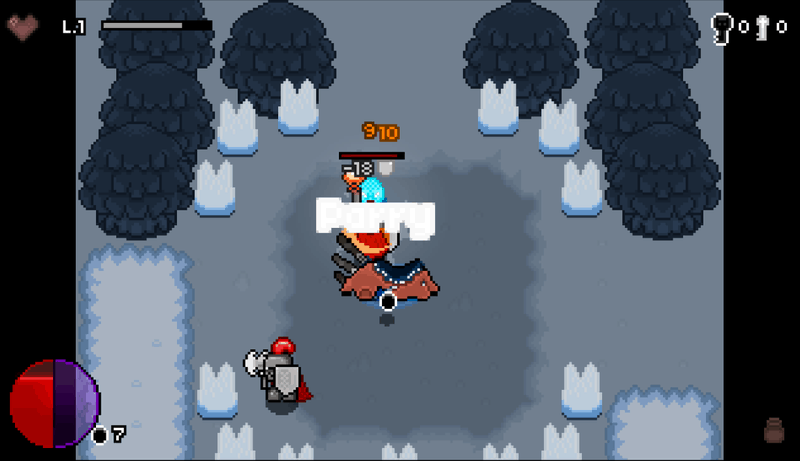 Second is the dungeons map. With a static world, the dungeons are different each time, so each time you restart you have a new layout. Thus, you have no idea where you left your soul; nor do you know where you are, or where you should be, for that matter. Multiply that by the fact that some areas look similar, which does not look like it is an intentional challenge, but rather feels like a nag.

There should be some maps online, in case you want to take a sneak peek. Overall, the replay value is good. 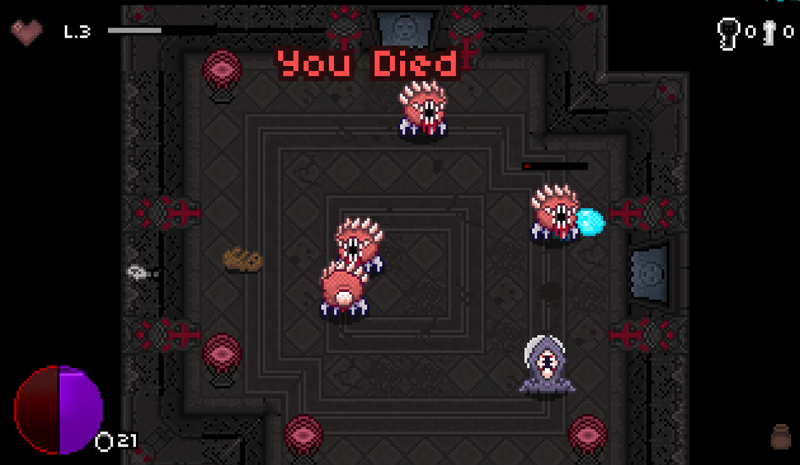 Nonetheless, I found it confusing why the same commands work now, and don’t work a minute later. Also, I found it more than confusing why Bosses are nearly harmless and easy to defeat while the bloody knights are unbeatable death machines. Once those corner you, it’s a lost case, so don’t let them come near you. Instead, launch long-range spell attacks because a melee attack against those creeps are rough.

One more thing I disliked about the overall gameplay in bit Dungeon II is the speed – I know it must be a nod to the old-school Nintendo games, but the kind of slo-mo seems unnecessary, especially in the combat, where a split second can send you once again to doom. 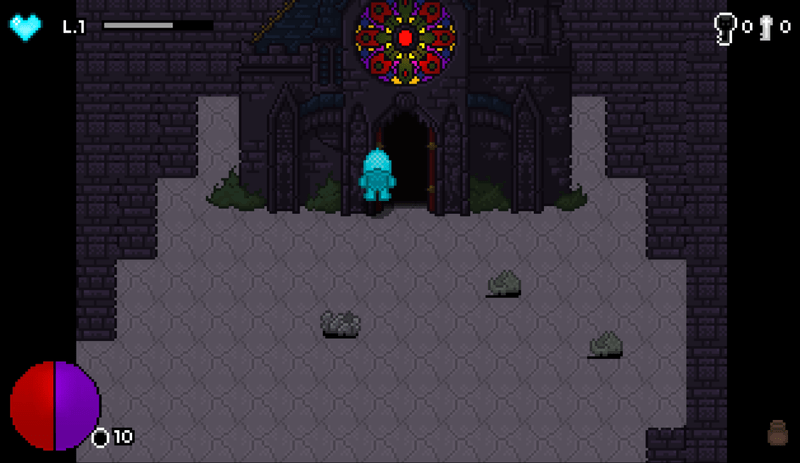 Obviously, anyone nostalgic of Zelda, Diablo and the likes of them will appreciate the neat 16-bit, pixelated retro style. Even though, the pixel art does not allow for much detail, the graphics are beautiful and the monsters come in great variety. The same can’t be said about the hero, who comes naked at the beginning of the game, but gets dressed as you find weapons and gear, which he wears with pride. Just stay patient till you find enough loot and your hero becomes a fully fledged knight in ammo.

I loved some elements more than the others. For example, the Black Church’s entrance is beautiful, while the abundance of several shades of brown looks dull. Overall, however, the design is great.

Another atmospheric element is the chiptune music that plays in somewhat awkward, but very true to the genre loops. 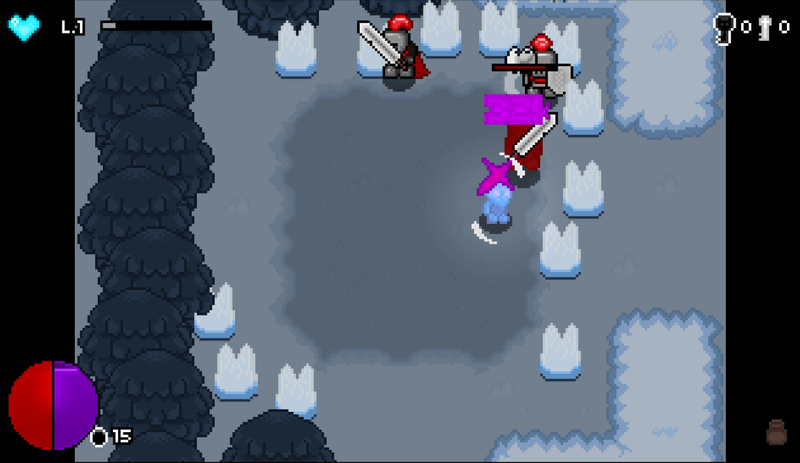 bit Dungeon II is fun, good-looking and has a great replay value, but it lacks in certain areas that made Wayward Souls ($6.99) or Stories of Bethem (free) as fun and great as they are. Roguelikes usually come with high replay value, and bit Dungeon II works just fine keeping you entertained, bringing the air of Zelda and Diablo with it. The gameplay is fast and varied; the bosses are giant and colorful; the weapons are fun and the overall concept is cool. However, there are a few awkward, if not clumsy, elements about it, like combat and (random) controls glitch, the absence of a story or a bit of humor, maps and the need to find the lost soul, that downgrade its fun factor to me.

Long story short, bit Dungeon II feels like a beefed up bit Dungeon. If you don’t mind a few inconveniences that feel out of place, you will most likely enjoy this action RPG, but it is not the best of its kind.