OK — I’ll start off by saying I’m actually a really big fan of puzzle-RPG games, such as Puzzle Quest for the DS. So naturally, when I saw Block Legend on the app store, I had to buy it. The game itself is only $1.99, and there are no in-app purchases whatsoever, which is really nice. With that being said, the premise has been set for a game that I’m going to really like, but did Block Legend live up to my expectations? Find out below.

Usually I start off with a game’s graphics/visuals, but that really isn’t important for Block Legend so I’m going to skip it all-together. As for the gameplay, I was mostly satisfied, it felt like a puzzle RPG game should feel. Everything goes pretty quickly, but during fights you are definitely able to use some more strategy than you would while walking through the map. There are a lot of different ways to play the game, you can focus on preparing the board for your next fight, or try to score as much EXP as possible before the boss battle.

A good example of one of my strategies, was to focus on leveling up magic and defense, and only using magic to do damage during fights. Since attack blocks turn into EXP blocks after a battle, I was able to collect tons of EXP by never using sword blocks while fighting. One thing that I didn’t like, was how you couldn’t use EXP blocks right after you level up — until you fight another enemy. I’m not sure if this is a bug, or if it is intended to be this way, but it seems really dumb to me. 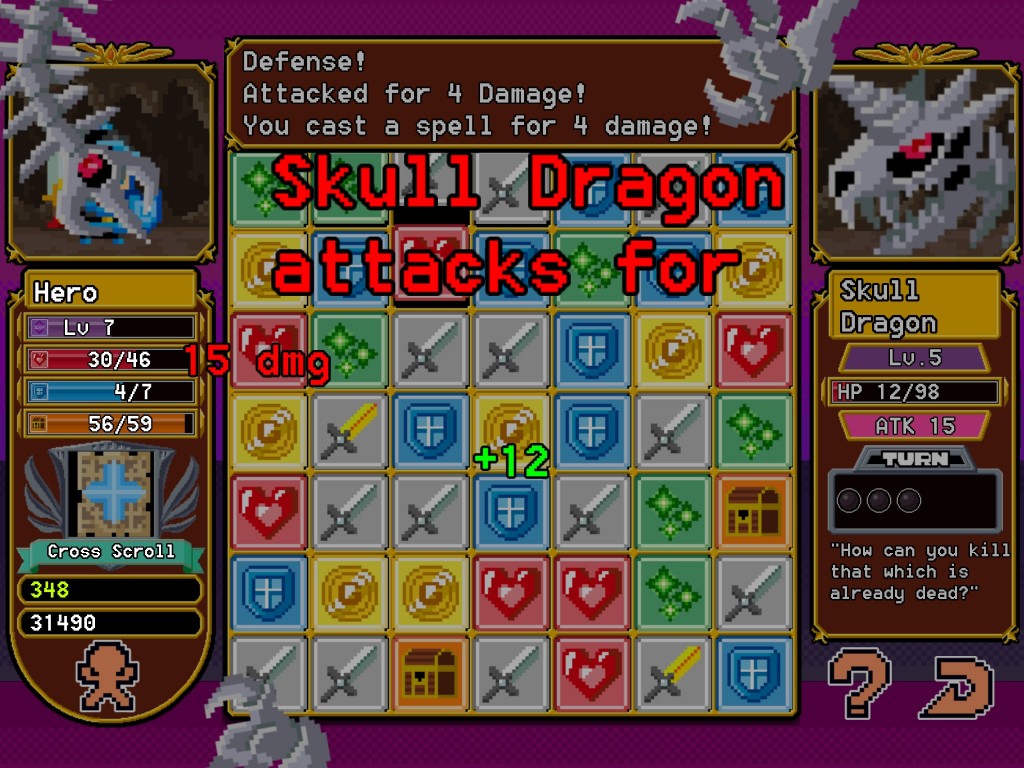 The game is actually pretty difficult the first few plays, since you’re pretty much thrown into it without any practice, and you can’t necessarily “take it slow” since your character moves through the map by itself. As you progress, you’ll collect a currency called Starbucks, which is used to unlock new characters and scenery. You can’t switch characters unless you’re starting a new game, but after you unlock a few, you’re able to make it further in the game a lot easier since the base stats are better. With my previously mentioned strategy, I was able to dominate with the Witch character pretty easily.

Overall, it was good, but not quite perfect — a bit more balance with the difficulty would be nice, as it almost seems like it’s impossible to progress further with the starting character, compared to an unlocked character.

With a decent amount of characters to unlock and play as, and various scenery to use your starbucks on as well, Block Legend has quite a bit to keep you working towards. I can’t say that these rewards will be all that enticing, especially the scenery, since you can usually see most of it during a single play-through by spending coins at the shops (not starbucks, coins reset every new game). You can’t really save, although it is possible to get a checkpoint and hang on to it even after you end up dying, but I don’t think this was intended. 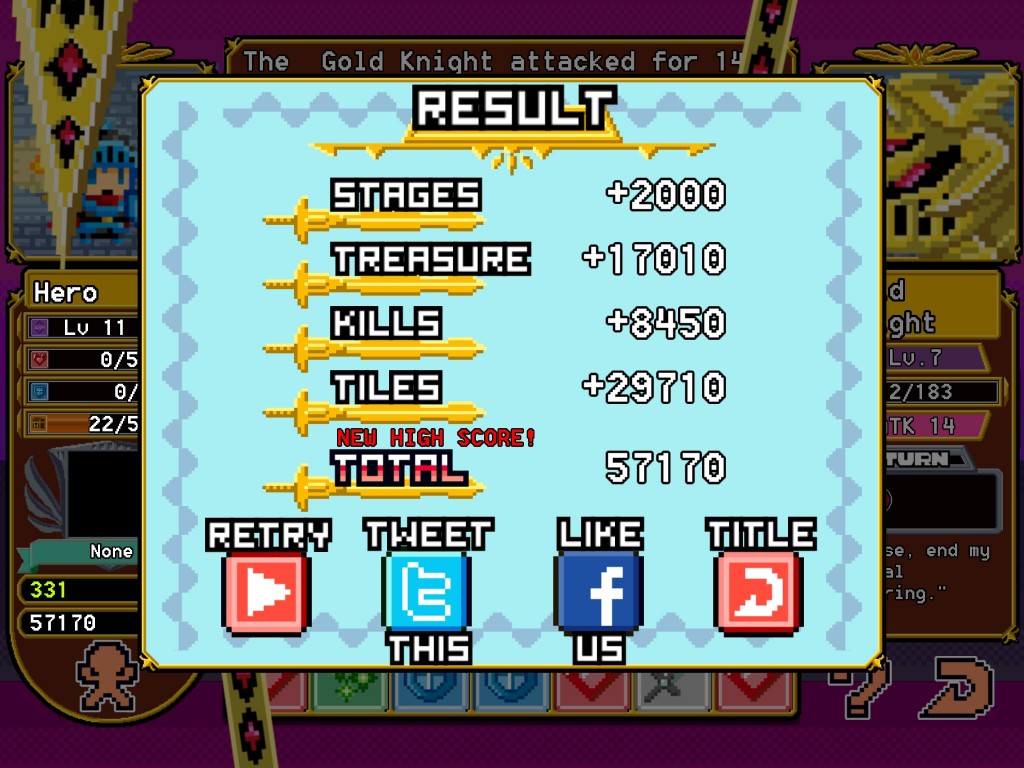 There doesn’t seem to be any sort of leader-board yet, so getting a high score pretty much limits your bragging rights to yourself and any friends you have that play the game. Essentially, your two main reasons for playing the game multiple times is unlocking more characters/scenery, and trying to beat your previous score/make it further in the game. Don’t expect any major community aspect, social media integration, or anything that is a little more “modern”.

Still, it’s a pretty easy game to pick up and play for an hour or so, even if you’ve played it many times before — the appeal still remains. I love the fact that you can’t just spend $20 and purchase a bunch of Starbucks to unlock all of the locked content, that gives more incentive to actually play the game and progressively unlock things.

Interface is key for a game like Block Legend, since the majority of the screen is your Interface throughout the entire game. You can check out your stats easily at any time, as well as see your EXP progress, item progress, and your current HP/Shield level. Opponent stats are also easy to see, and there’s a very easy to understand indication of how many turns you have before the next attack from your enemy. As a whole, everything gels together really well, and I didn’t have many issues when dealing with the Interface. 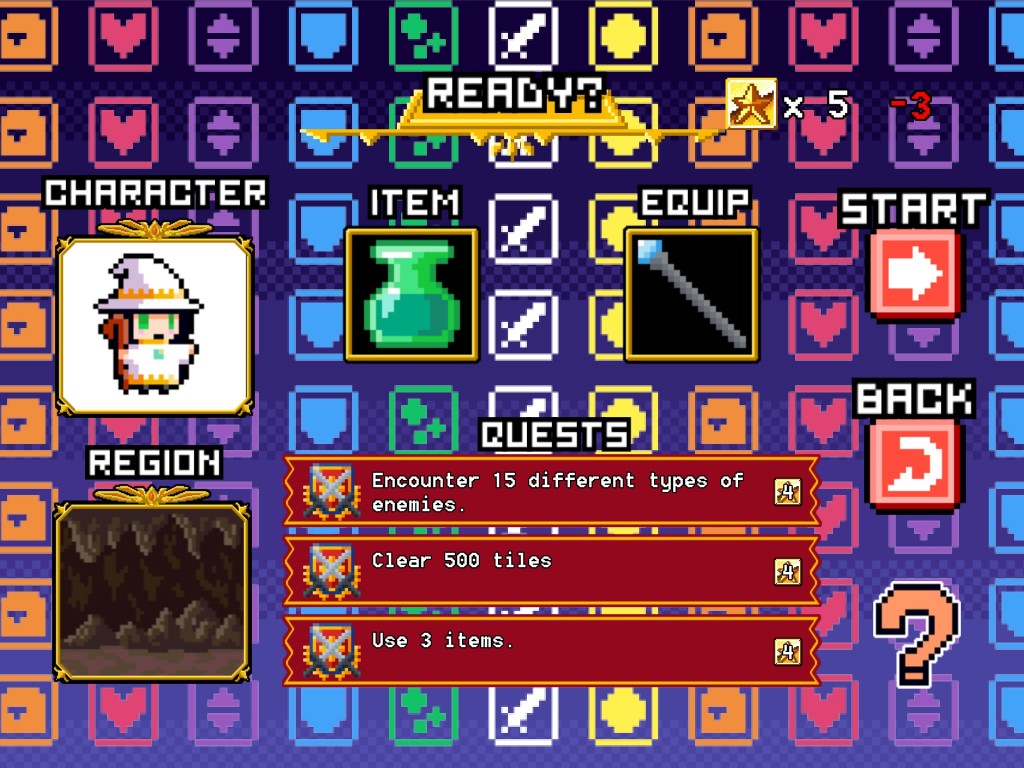 However, it still isn’t perfect, but most of the problems were very minor. For example, when I was in a town visiting the shops, it’s a bit confusing — especially when trying to change your quests. Other little things like that at the shops bugged me too, like how you have to un-select an option before you can select another. Also, there were some items I couldn’t afford, and they were supposed to be tinted red, but every so often there would be one that wasn’t tinted but I still couldn’t afford it.

Like I said before, I’m a fan of the Puzzle RPG genre, so I’m not exactly new to this type of game. Unfortunately, I can’t say that Block Legend really brings any new or unique concepts to the table, and it’s not hard to find some very similar games. It’s not a complete clone of anything else, but it is really basic — I would have loved to see some more Innovation, just something to make the game feel like more than a block breaker with no other feature. 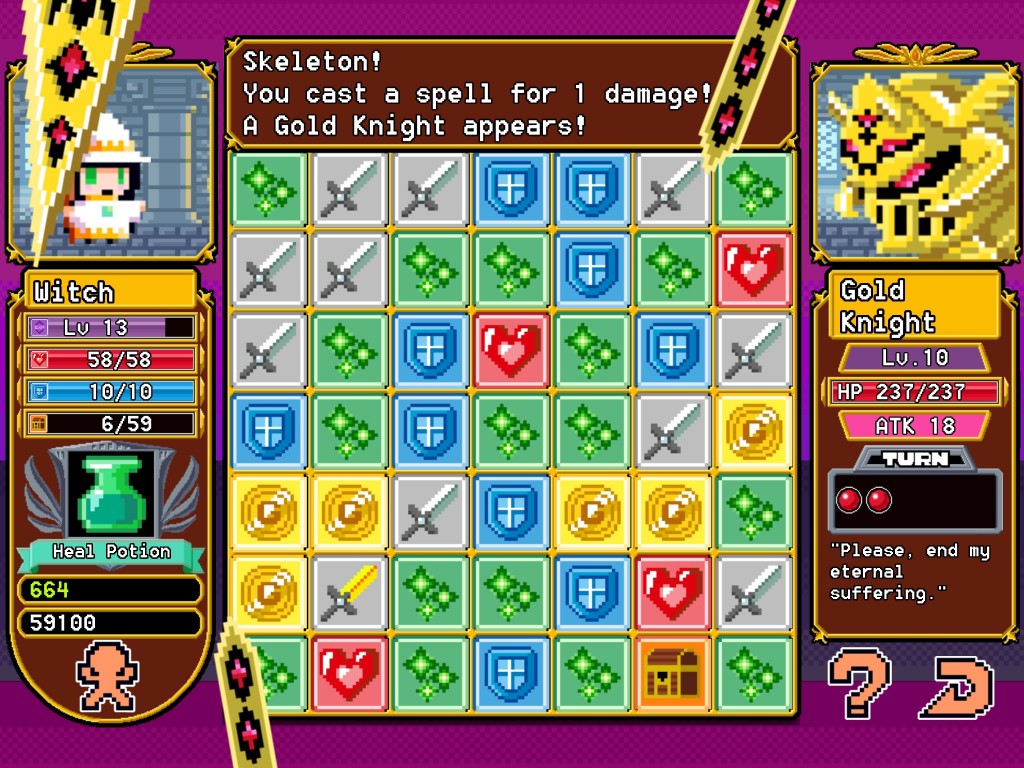 Even though it’s lacking in Innovation, the game is still decent, as you should be able to tell from the rest of the category ratings. However, if you’ve played a lot of other games in this genre before, you might not be satisfied with what Block Legend has to offer — unless you’re just looking for something that is going to work well and is relatively fun.

To be honest, I was hoping that Block Legend would be better than it was, but maybe I was just too spoiled by Smash Hit, which came out just a few days prior to Block Legend. Regardless, I can say with full confidence that this game is not perfect, but could be something better with a bit of updating from the developer. A few quick fixes, along with some sort of major feature implemented into the game to add some more Complexity, and this game easily could score a 4 – 4.5 rating from me.

Click here to check out Block Legend on the Google Play Store!

Click here to check out Block Legend on the Apple App Store!

Make sure to leave your thoughts about the game in the comment section!