BC Stunts landed on the play stores with a big crash, boom, bang, and in case you didn’t hear the noise, PocketMeta is here to inform you. Headup Games had a major success with the last year’s Bridge Constructor, and now they have come up with something similar, but not quite the same, so any BC fan should want to check it out. We did, and here is what we think. 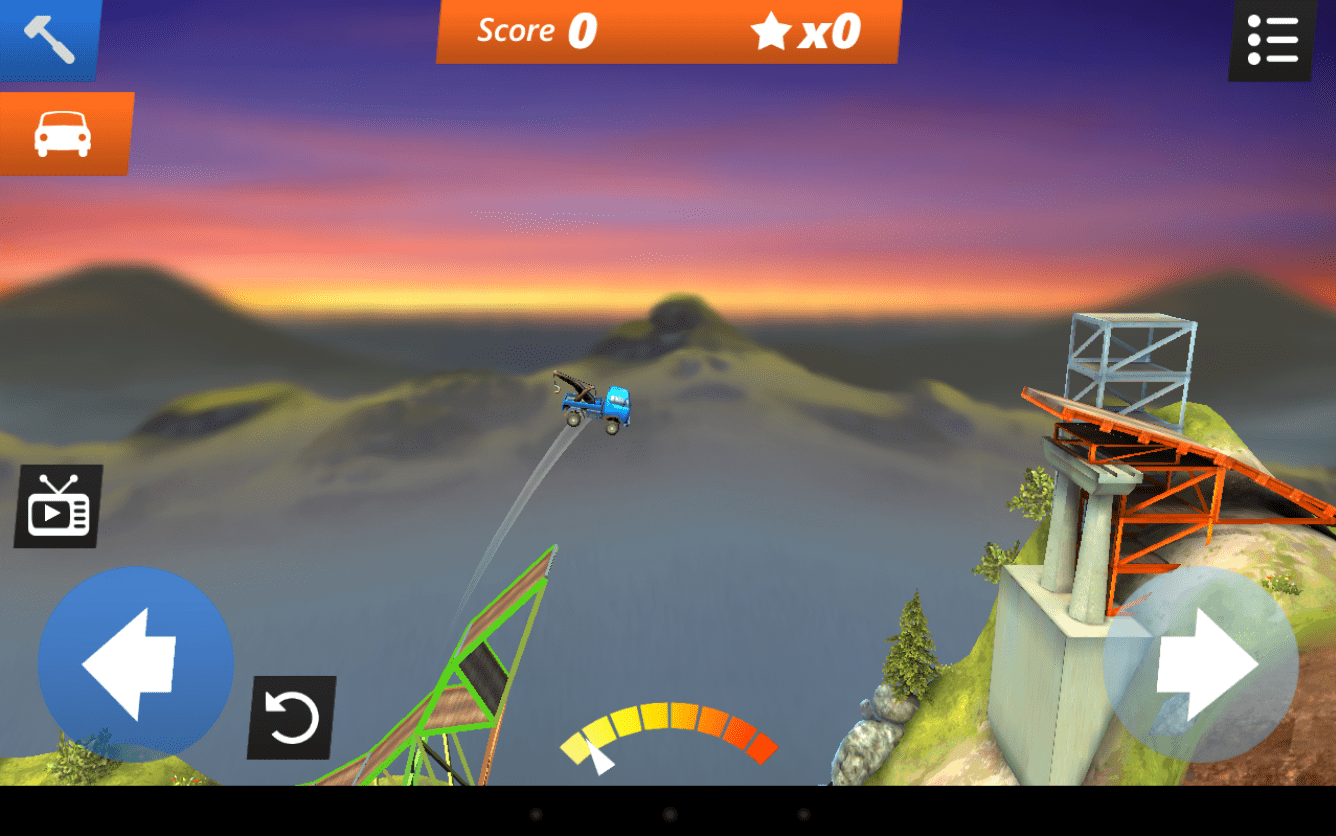 BC Stunts mixes two genres in a nefarious concoction. On the one hand, the game is a bridge constructor with its typical tasks of building a stable bridge to cross the great desert divide. On the other hand, it adds a Trials sort of stunts racing, but with limited controls. The result is somewhat befuddling, yet it’s challenging and properly entertaining.

Don’t rush into the building tasks right from the start because the first time you launch the tutorial it won’t let you build just yet. I say this to help you avoid the confusion because it may seem like the game won’t let you build. Relax, go through the tutorial and do what it tells you without being too creative just yet. By the time you get to the building part, you will have learned a couple of useful things even if you have played Bridge Constructor before.

The building process may seem simplistic during the first chapter, but before long you might find yourself hopelessly stuck. You don’t just have to join the parts of the structure, or add new joints. At some point BC Stunts adds more complex challenges like red areas, where you can’t build anything. Nor can the car drive there. Some levels with the red areas are mind-boggling to say the least. 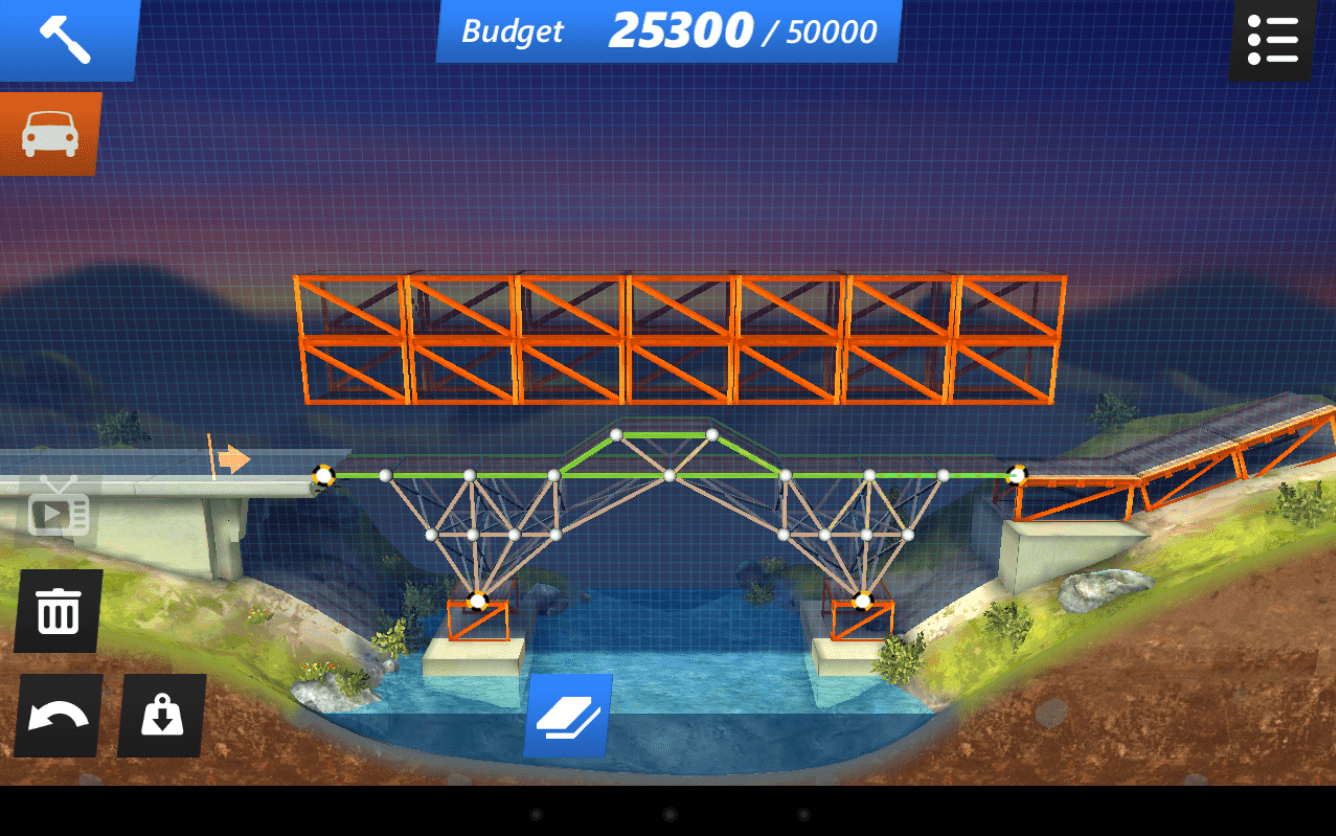 Then there are the three stars, and I am slowly beginning to hate the three star concept. BC Stunts does not want to make it easy for you to collect them. Besides the stars, there are screws you need to collect. You may skip them, but collecting an X number of screws in a chapter is a big deal. Don’t know what it unlocks because I haven’t been able to collect them all. Mostly because all I could think of is whether or not I will be able to balance a poorly fixed structure, a barely manageable truck and my shaky hand-eye coordination to clear a level.

Now that we mentioned the truck, let’s see what the stunts part stands for. Not much, actually. You have two buttons only – throttle and breaks. Tap and hold the gas and the truck will accelerate continuously until it reaches some limit. When it jumps, however, keeping the throttle pedal pressed will send your truck into an impressive somersault backwards. The same is true for the breaks pedal – if you keep it pressed during the jump, it will have your truck rotate clockwise. Depending on the structures and the location of the parts of the bridge and the stars, you will have to adjust the direction. The stunts part is all very shiny and explosive. There are gas tanks scattered here and there, and your truck will explode more often than it reaches the finish line, so you will enjoy plenty of the spectacular booms. However, the difficulty of the game seems a bit higher than I would call comfortable.

The point is there are too many factors at play here, and when you think you have constructed a more or less stable bridge that will withstand a five ton truck, you mess up the stunts part and still lose. Or, you can have the perfect bridge, and do your best with the stunts and still lose until you try again and again to catch that right moment during the stunts that might actually send your truck crashing, but it will reach the finish line with its last agonizing breath. And that’s what constitutes a letdown in BC Stunts – the outcome largely depends on the multiple replays after you have done what you think can be done for the bridge itself. At the same time, you never know if you have done all you can because there is no help or instruction to tell you that you have done the right thing. This may not be a negative factor after all because it encourages creativity, but you need to realize what factors affect the gameplay – your geometry skills during the construction process, your perfect hand-eye coordination during the stunts, a lot of patience and luck.

The gameplay has three main views, which are easy to sort out and use. The Editor view lets you construct the contraptions. The Preview lets you see it under the real world physical conditions, and this is where you see whether what you have just built will stand by itself without collapsing. It lets you get the hang of how these things stick together in the first place. The Drive mode turns on the environment and the lights and lets you control your blue truck and try to cross the deadly divide. 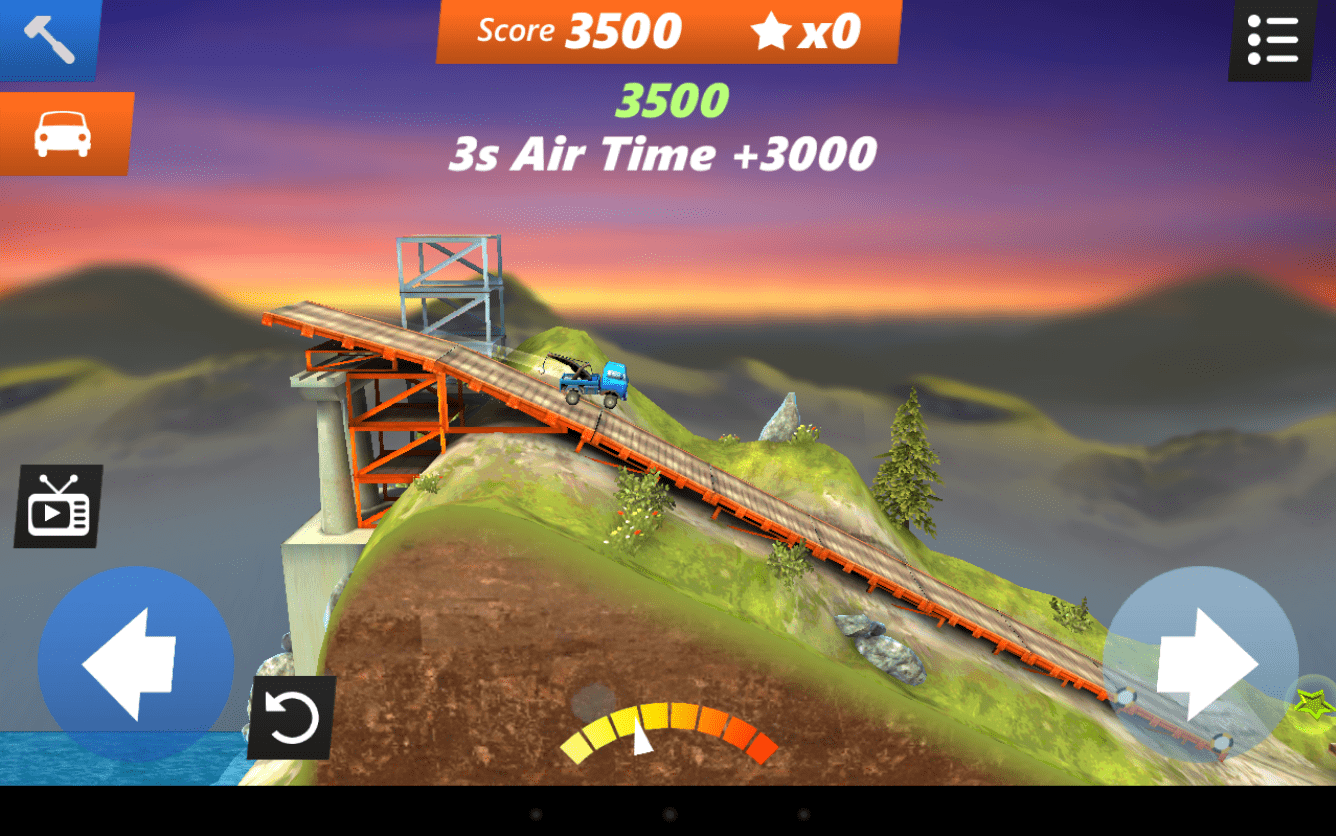 My biggest whine with BC Stunts is in the controls system. First of all, the construction process is not as smooth as I’d like it to be. Creating a new joint requires you to long-tap on an existing joint, the one you wish to be extended with a new joint. The long-pressing on it will show you four blue arrows, which in itself means you can move it. Creating a new joint, however, requires you tap on the joint again and pull it in the desired direction. As a result, the two gestures are often mistakenly registered by the game, and I end up using that Un-do button quite a lot, which is frustrating.

Next is the limited driving controls – throttle and breaks. It somehow feels a bit incomplete, or insufficient for the level of precision sometimes required to perform a good run. One way or another, the two parts of the game – stunts and construction – are very fun, but need some ironing out of the rough edges in the controls department. 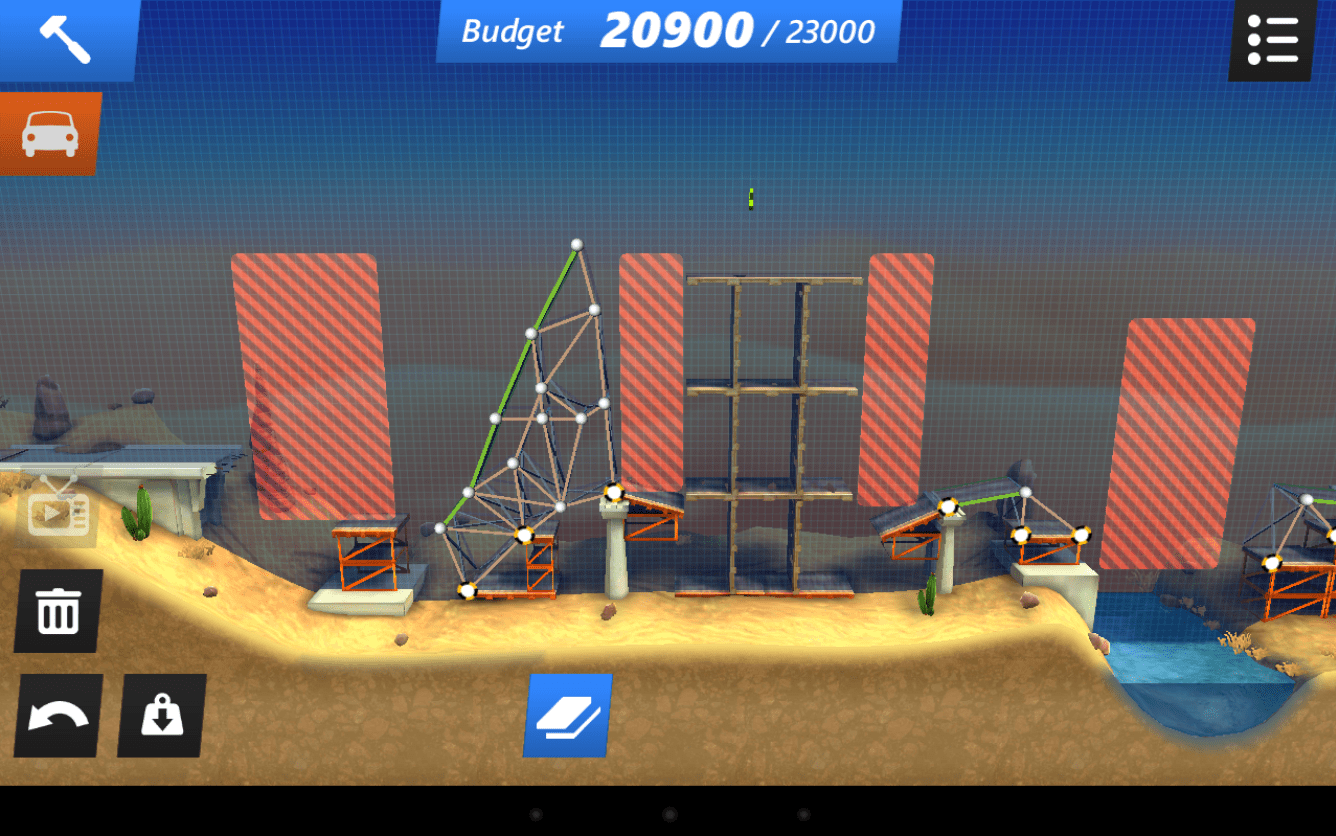 BC Stunts is difficult. Bridge Constructor hardcore fans might disagree, but BC Stunts looks like it could be a very good game for the newcomers to the genre and the younger audience. Alas, by chapter 2 many from that crowd will lose the motivation because progress gets slow. Yes, with a good deal of patience and a right attitude to challenges this game is a blast, but the way it is now it may be a bit too hard for the newbies in the world of BC. An Easy mode could make the game more accessible.

The construction mode is also limited by a budget defined by the game. Exceeding it is not an issue, the game seems to give you more than you need each time.

Bridge Constructor Stunts looks attractive, and the explosions are fun. It’s not the prettiest game we have seen, but it’s a solid B. More variety in the backgrounds within the chapters would add more to the replay value because the environments look a bit monotonous. 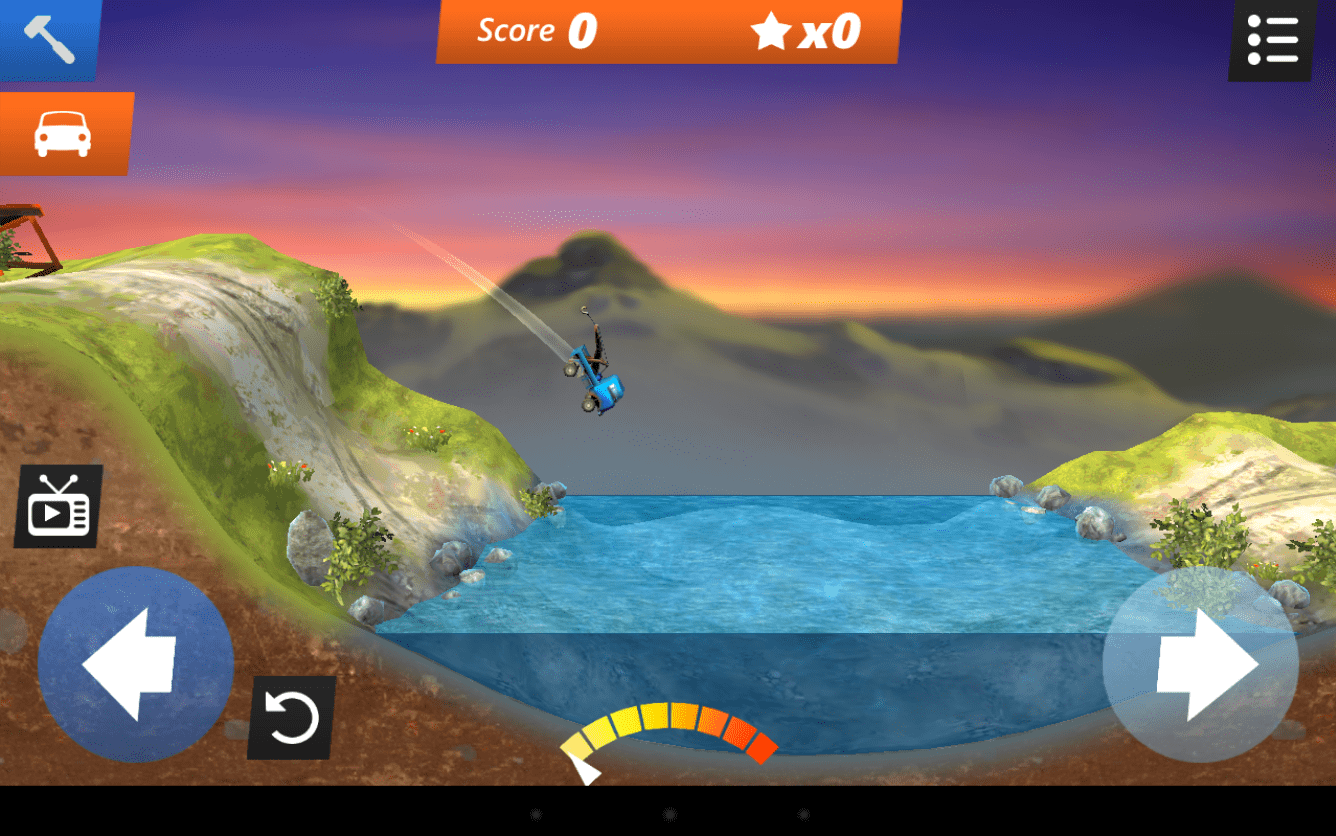 The game consists of five campaigns, with different number of levels in each, so the gameplay time is very decent during the first walkthrough. I am not too sure I will want to replay the levels I cleared simply because building a good bridge is not enough. Nor is it the main objective. You don’t need an excellent bridge. You need the one that will hold long enough to let the tuck do its thing and maybe collapse afterwards. The competitive players will surely want to collect the spare parts and the three stars in each level, but the mediocre bridge builder like myself is happy every time I make a close cut to the finish line, as my truck catches fire split seconds before it. I’d say the fans of the genre will appreciate the challenge, but a casual player might feel a bit overwhelmed.

No IAPs, the game is a premium title, with a free demo as a standalone title on both play stores. 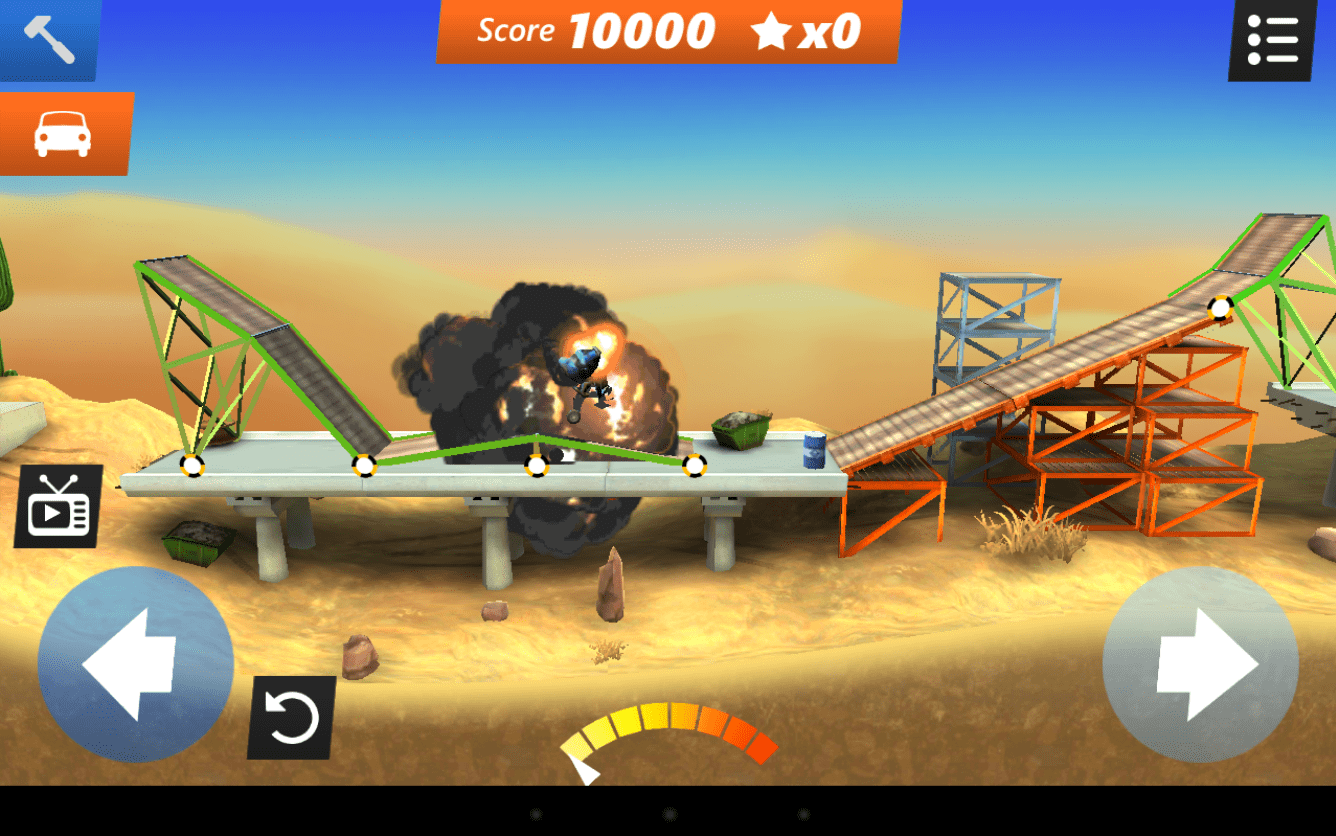 Jack of all trades is a master of none, says the old proverb. Bridge Constructor Stunts wants you to be a bridge engineer and a stuntman at the same time, and the best part is you don’t have to excel in either because the gist of the game is in making the big things collapse and explode spectacularly. If you take it lightly and have the patience for the no-nonsense challenge of joggling the two very different gameplay parts you will most likely love BC Stunts. Its difficulty might be confusing for the casual player, and the game might need to balance the difficulty curve better and make it more accessible for the newcomers to the genre.