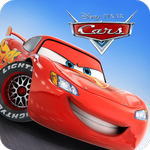 Remember Disney movie cartoon Cars and Lightning McQueen? If you don’t, you probably don’t have kids. And if you don’t have kids, or you are not a fan of the Cars yourself, you might as well skip the game. Everyone else, join in the best mobile game that takes you to the Cars universe – Radiator Springs.

Cars: Fast As Lightning takes you and your kids (literally of all ages) to Radiator Springs, where you will enjoy all the perks and fun of racing, city building and social gameplay. 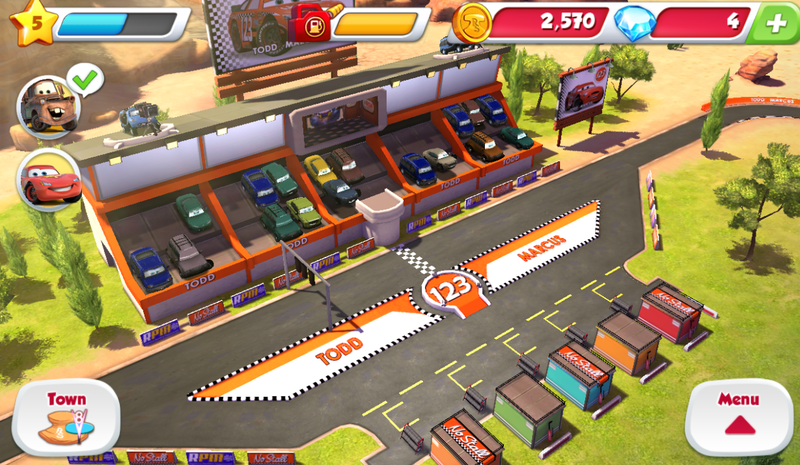 Fast as Lightning is a social racing game that incorporates several important genres in one glossy cover. First, it’s a racer. You pick from available cars, and by default it’s Lightning McQueen versus Mater, and race along a simple track. Then, McQueen becomes a sort of a guide and does not race until you unlock him, and that is going to be a long journey because he is the last in line of unlockable Cars characters.

Second, it’s a customization play that lets you unlock cars and with cars come workshops and pits. You will be able to customize and upgrade your cars, enhancing their speed and overall performance.

Third, you get to build things in Radiator Springs and on the racing track. The more you race, the more cars you unlock, the more coins you earn, and the more building elements you get.

The game eagerly incorporates your social accounts and you can invite friends to win some perks. 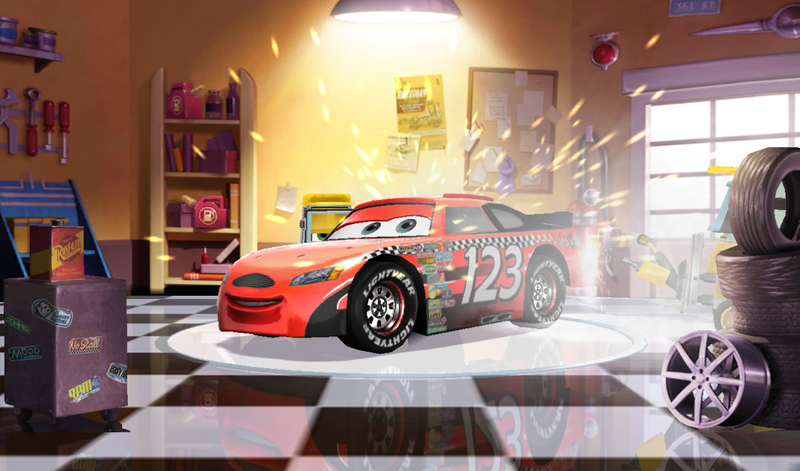 Since the game is kid-oriented, everything here is intuitive and does not even require any level of literacy – I’ve seen a 4 year old get by pretty fast without knowing what the instructions and buttons say. You just need to be around for the first couple of rounds of racing, building and upgrading to give a simple tip here and there, and kids pick it up lightning fast.

You race by tapping on the big gas pedal, and you let it go at steep curves not to bump into things, and it’s kind of tricky at first. I myself was unable to beat the first race for 5 times until I got the hang of the gas button. Then, the system introduces a neat tip element – the blue circles along the track are the track parts where you need to slow down, so you have to tap exactly the moment you’re on the blue circle, which means you have to let go of gas pedal right before that.

You swipe left, right or upwards and downwards when you perform crazy maneuvers like jumping, but again, the game tips you every time you need to swipe by displaying a large green arrow indicating th direction you need to swipe.

You build things and upgrade your cars by following pretty straightforward marks in the UI – an exclamation mark, or something that is of red color. Again, when you do it once with your child, he or she will know where to go for new tires, and how to collect earned coins from the shops in Radiator Springs.

By the time you unlock the first car, Todd, you will know if you want to continue playing with your kids, or let them take full control. 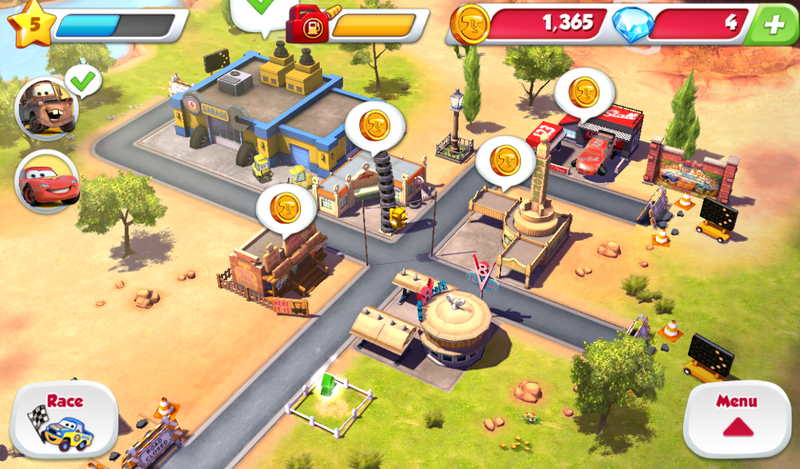 The game follows the footsteps of the animation show, so it’s a sleek and visually appealing cartoon, basically. Multiply that by the dialogue with fully-fledged voice over, by Owen Wilson as Lightning McQueen by the way, and you get an interactive cartoon, which is awesome.

The music is non-intrusive, but quite corresponding, however I was not overly impressed in this respect. What kids liked, though, was the fancy catch phrases the cars keep saying all the time ‘Ready to race!’ or ‘Ka-chi-ka, ka-chi-ka’ by Chick Hicks. 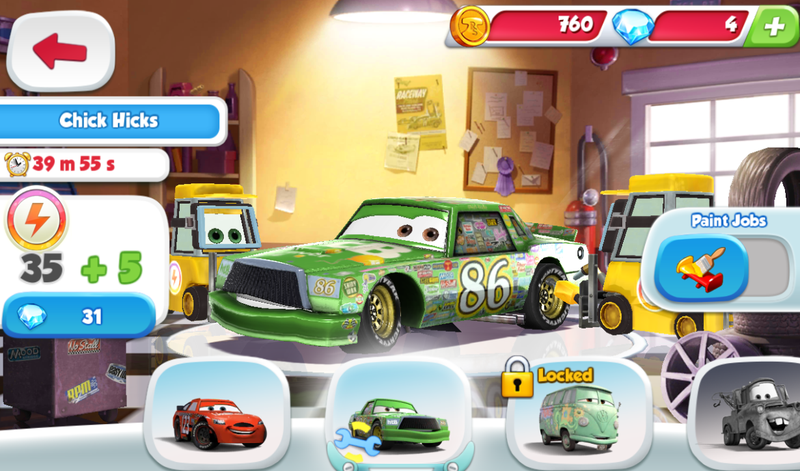 By the time you unlock a few cars and build their pits, and upgrade them for the first time, the bundle of gems you get from Gameloft as a gift gets exhausted. And from there, you either have to buy gems, or quit playing altogether. They are too rare to earn by playing, and everything you can build in Radiator Springs that is of any substantial value, like buildings, requires a lot of gems. You can’t build stuff with coins you earn, except for a couple of trifle billboards and information stands. If you really want to build your town, buy the gems.

Upgrades and building tasks become absurdly long. Chick Hicks is only the second car in the long line of cars to unlock, and his second upgrade will take 40 minutes! Expanding a little piece of my town will cost me 8000 coin and another 30 minutes while the next thing will cost 45.000 coins and a few hours to complete. Is this ridiculous or obnoxious?

Further on, everything slows down and all you do is send someone to upgrade or start a building advance, and wait.

Racing comes in limited batches, too. You have only a set number of times you can race, which is displayed by the little gas tank icon at the top of the screen next to the gems and coins. Once that energy is exhausted, wait some 8 minutes more, and truth be told, I can’t tell if each car has a standalone energy bar (as the cupcakes in Angry Birds Go), or they all share one.

So, in the end, even though the game has the energy as gas tanks, coins you earn through racing and XP for tapping on cars’ requests, gems are the currency you will need most, and they come in a variety of packs from $0.99 to $19.99, and even if you buy them, they run out on you pretty fast if you are playing on a consistent basis. 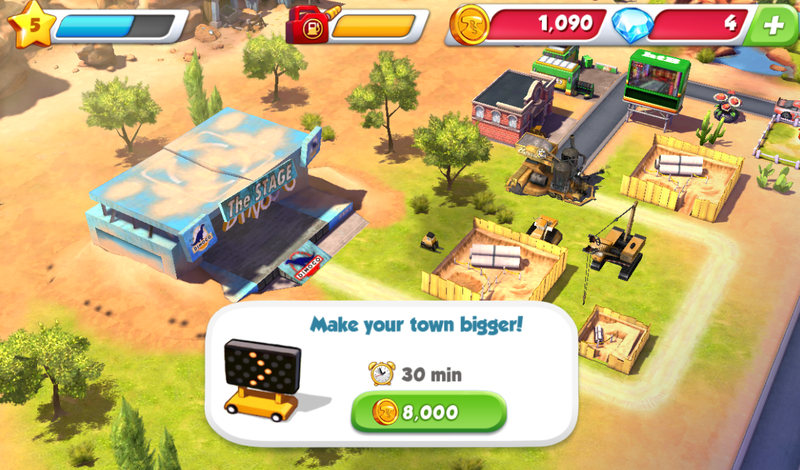 Cars Fast as Lightning is an awesome game, but performance needs to be addressed as soon as possible. It may crash, freeze and drive you mad, hindering the gameplay even more than the gem sucking core of it. Although, I don’t see a pattern in the crashes – it can run smooth all the morning, and lag like crazy in the evening.

Cars: Fast As Lightning is an awesome car racer and town builder for fans of the Cars movies of all ages. It is visually polished; it is fun to play in every aspect of it, be it racing, building, upgrading cars and beautifying the town and adding neck-wrecking elements to the racing track. User interface and all the menus are intuitive, so even young kids will be able to play it. However, the game is heavily focused on constant in-app purchases, and one or two packs won’t be enough to keep you running for long. It also has a couple of performance issues that can crash the game the moment you least expect it, but hopefully Gameloft addresses that in the update. As one 11-year old Android player said, ‘I am 11 and I wanted my little brother to in joy this but that game sucks with bugs in it. I pretty much hate the game right now. SO FIX THE DANG GAME PLZ’ – that’s how kids want to play it – they beg Gameloft to fix it.

Money-wise, I’d rather buy the game once and play without having to buy anything else, but Gameloft aims to earn $20-40 out of a free-to-play game that would have otherwise cost $2-4 as a paid game, so I dare say greed can ruin cool things.