Cava Racing hit Google Play store a week ago, and we encourage you give this beauty a look. If anything, its graphic style is pure eye-candy. Intense yellows, greens and reds in what seems to be only a 16 or 32-color scheme, encompasses a lot more than you would anticipate, despite its simplicity. Instead of walking the safe path of typical space-themed arcade games, this little racer adopts a funky kitsch style, or whatever this style’s name is – the developers may correct me. 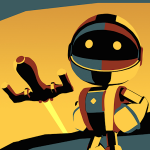 Set in some unidentified time and space, Cava Racing is nothing but the racing itself – we do not know who the robot-like pilot is, or where the track are located. They seemingly float in a colorful, saturated space. 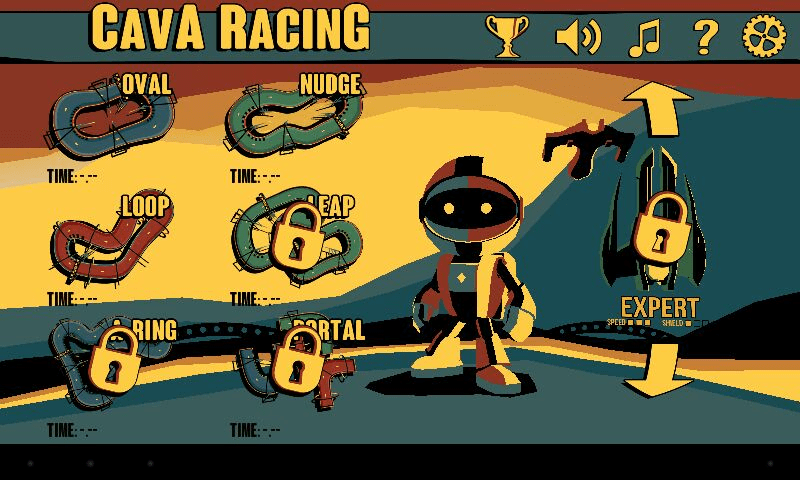 You control a tiny spaceship on a series of races, taking place on different tracks. As of now, there are six tracks, and only one is available by default. The rest can be unlocked when you beat a specific record, which may as well be your own record at least once. Truth be told, I haven’t figured out which record I need to beat to unlock each next level, but as long as it is possible to accomplish – who cares?

Cava Racing is a top-down racer, so whoever gets dizzy with too much spinning left and right needs to be prepared for a lot of that 90 degrees zig-zagging. 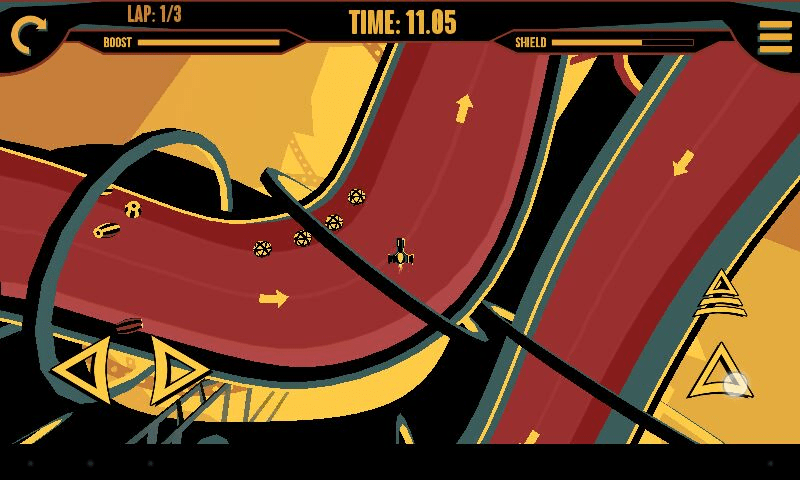 Also, I am not sure if it is the peculiar graphic art of Cava Racing, or the mechanics and the top-down view is to blame, but this game is the kind that imprints itself in my eye retina, so when I go to sleep I keep racing for a few minutes before I doze off.

The game has three difficulty levels that correspond to three different ships while each ship has two criteria – speed and shield. The simplest of them all has 1 speed and max in shield while the hardest one has it vice versa. You need to play a certain amount of time and reach certain record to unlock the other two ships. 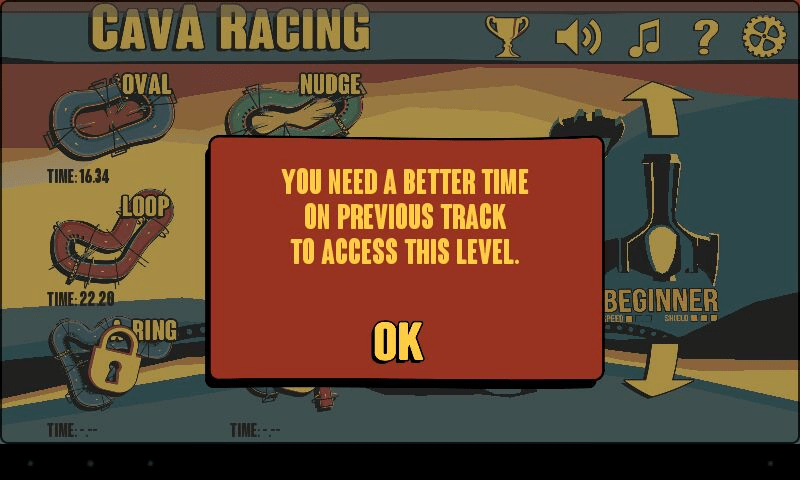 Now, your rocket has two bars at the top of the screen – boost and shield. You can use the boost whenever the track allows for a considerable increase in speed, but you don’t use the shield – it’s just there. The purpose of a shield is to keep you alive when you hit the walls and the obstacles. If you pay attention, each hit takes a little bit of that shield bar.

Besides obstacles, there are orbs all over the tracks, and you need to collect them – they power up your shield. The tricky part is they are always located on the inside angle of each curve, so you need to maneuver pretty good to reach them.

Cava Racing offers three control schemes – tilt, floating joystick and on-screen buttons. You can customize their sensitivity in the Settings. Right from the start it becomes obvious the lower the sensitivity, the more chances you have to actually control your spaceship. 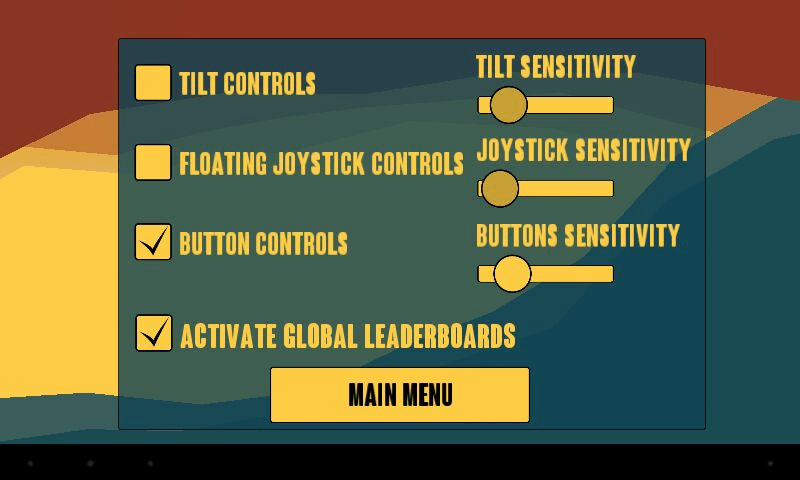 Many users complain the controls are difficult to get used to, and whenever the ship accelerates too much it becomes literally unmanageable. I, for one, see this control scheme as that of the recent Quest Keeper – it’s the part of the challenge. You can find the sweet spot and get used to the controls, improving your results.

That said, you might have to experiment with the different control layouts and sensitivity.

Cava Racing is a visual delight wrapped in wonderfully peaceful and catchy soundtrack. I love everything about its visual presentation – the font, the menus, the tracks and the environments. 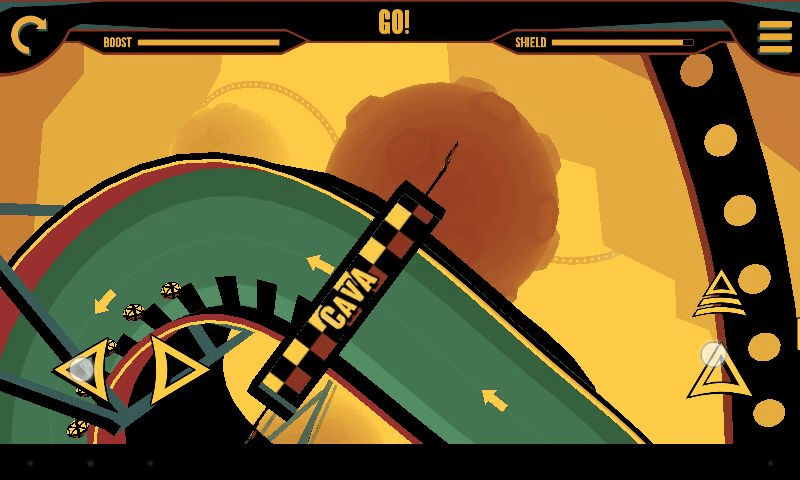 Despite its visual glam, Cava Racing failed to hold my interest for more than two days due to one, very peculiar glitch, which is a real problem. I am the kind of user who never competes on the leaderboards, or saves their progress on the cloud. I just don’t like to give apps and games those privileges – nothing personal.

Cava Racing loads that extremely annoying Google + and Google Play account screens, it takes twice as long to wait up till they load and tap ‘cancel’ and ‘no’ each time as the short track racing itself. The game persists you should give it that access more than any other game I have ever played on Android, and I can’t help but think it’s a bug that needs patching. Open the game – nag screens, open the settings – nag scree, load a track – two times of nag screen, replay – nag screen again. 2 minutes playing – 4 minutes getting to that replay button. You have got to be kidding me. 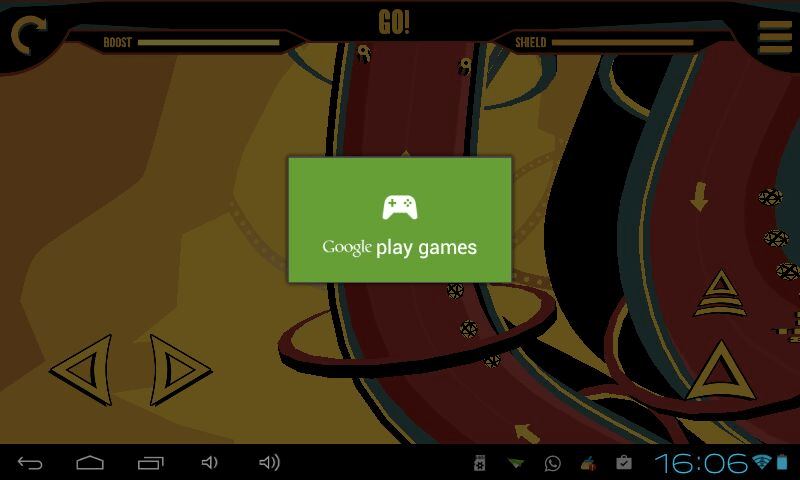 While, unlike those who complain about maneuvering and controls, like the gameplay and the visuals, but that G+ log in demand is way over my tolerance level. Until that is addressed, I prefer to uninstall and save my nerves and time.

Upd. The developers suggest you can disable the G+ nag by un-ticking the box next to “Activate Global Leaderboards” option in the game’s Settings menu. We up the rating based on that. However, opting out of G+ window at the beginning of a game should be enough. Even though there aren’t many settings in the game, I always focused on the controls sensitivity.

The Android game is free and features no IAPs. Neither have I spotted any ads. That said, the iOS version is $0.99, which is said to be a sale. Why the difference?

Whatever the reason, I encourage the Android users give this fun game a try while it’s free. 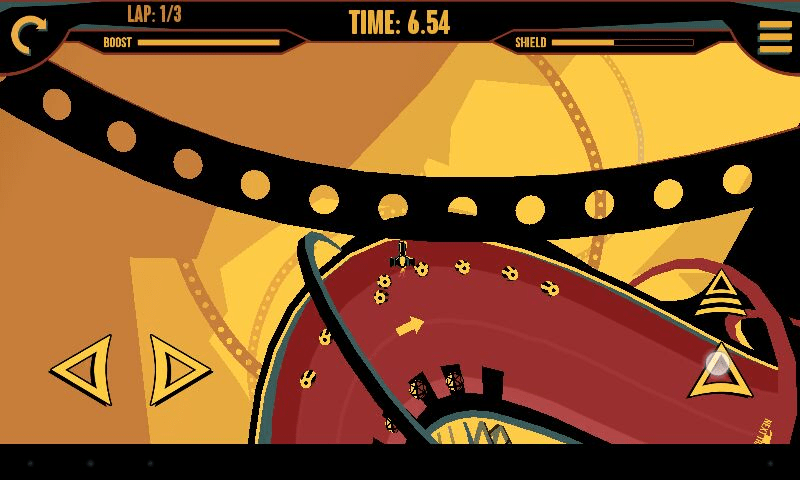 There is a question mark in the main menu screen, and it takes you to the practice mode where you get to try out the chosen controls scheme and fly around different, yet short pieces of tracks. It may be fun just to float around getting used to the controls and the speed without the need to go through the pains of replaying (by that I mean the nagging G+ loading screens). 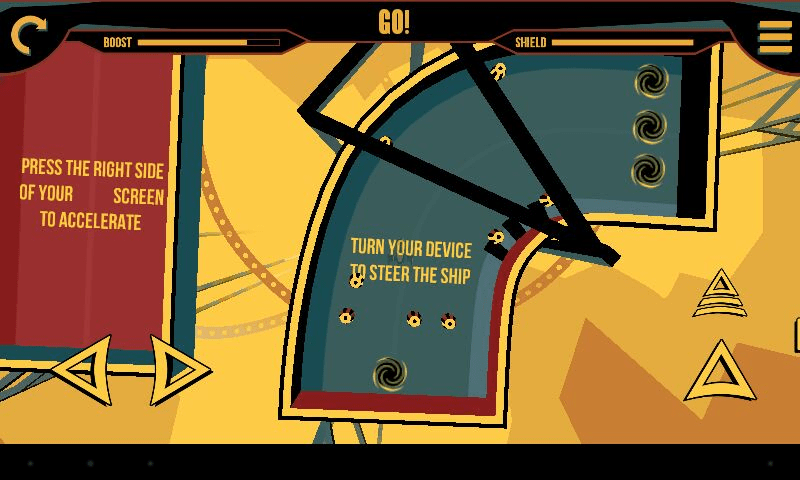 Boost may not be the most useful of things because it tends to mess things up. Cava Racing is unforgiving in terms of the tiniest scratches to the hull, and the spaceship feels like it has been invented by the dumbest Star Wars character – Jar-Jar. So start by aiming at the shield orbs and mild curves, avoiding hitting the walls and the obstacles instead. 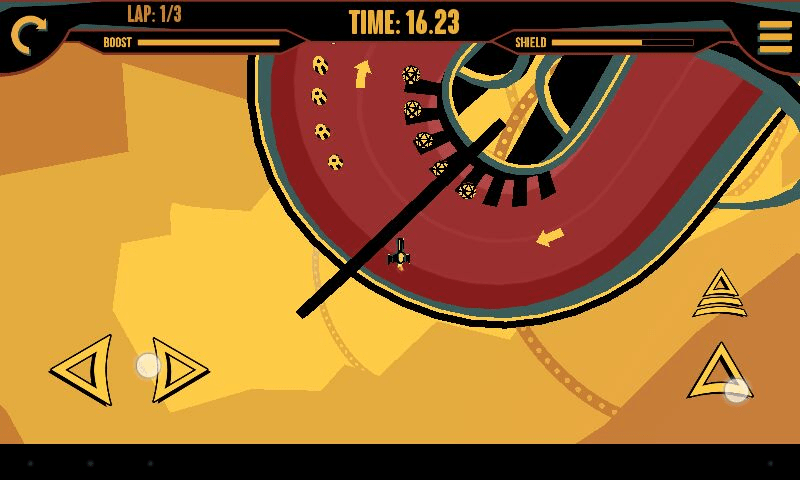 The controls system has a mild learning curve, but when you get the hang of it you will enjoy the gameplay, which is a classic top-down racer with a gorgeous design. It’s the game’s persistence to sign you in to force you into competing on the leaderboard is what killed the fun. It should not be that persistent. 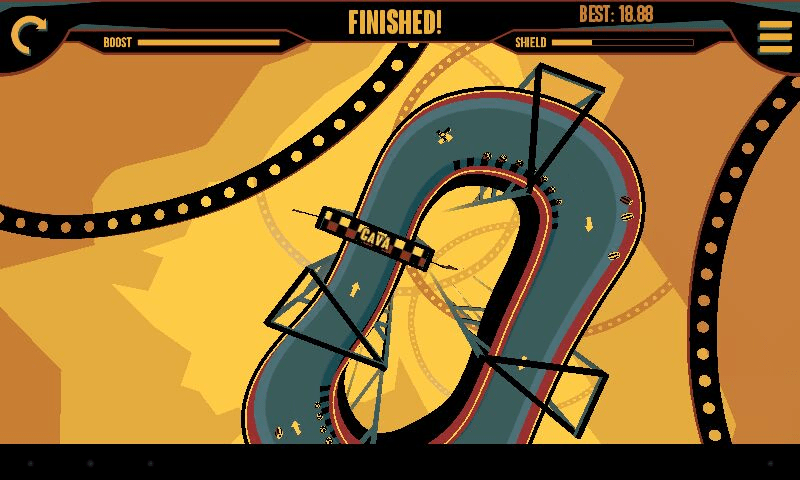 As far as Android version is concerned, Cava Racing is a must-try top-down racer this month – it is free, it looks gorgeous and it is fun to play, provided you accept the challenge. I have read users woes about the spaceship being too hard to control, but I see it as the only real challenge of the game, which can be overcome by quick reaction and good hand-eye coordination.

I have read reviews of the iOS version that was released earlier in February, and clearly the developers have addressed the controls woes, so my experience on Android was quite pleasant and moderately challenging. It also speaks in favor of the developers since they keep tabs open on user feedback and work on updates. Hopefully, the developers patch that only glitch that punishes a player who dislikes global leaderboards way too harsh to let them keep on playing. As for the rest, we encourage you give it a try and see it for yourself if the controls are a nag, or a challenge.