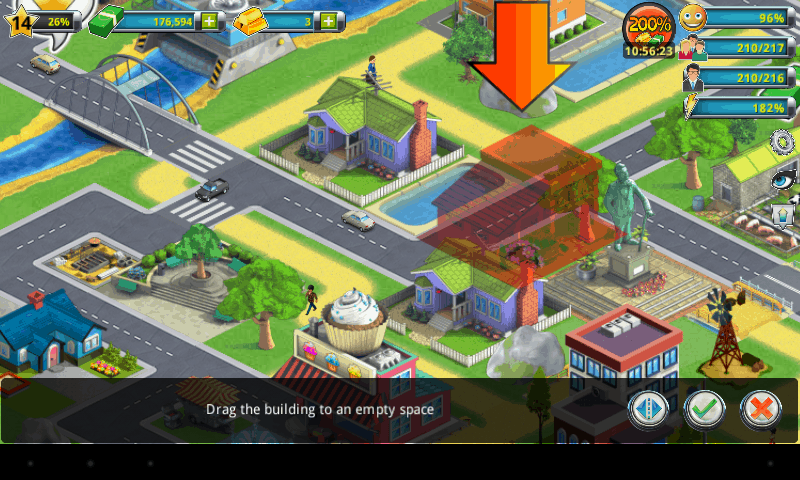 The second installment is a significant leap from City Island first game, and if you played it, you will immediately see the game evolved in many ways. The premise remain the same – you get to build a city from scratch and grow it into a metropolis, that is – potentially.

You start with a small but beautiful piece of land off the sea coast, and a limited number of houses, community and commercial buildings you can build. Soon enough, you unlock more of the building types, and citizens begin to flock to your city, asking for more jobs and houses. 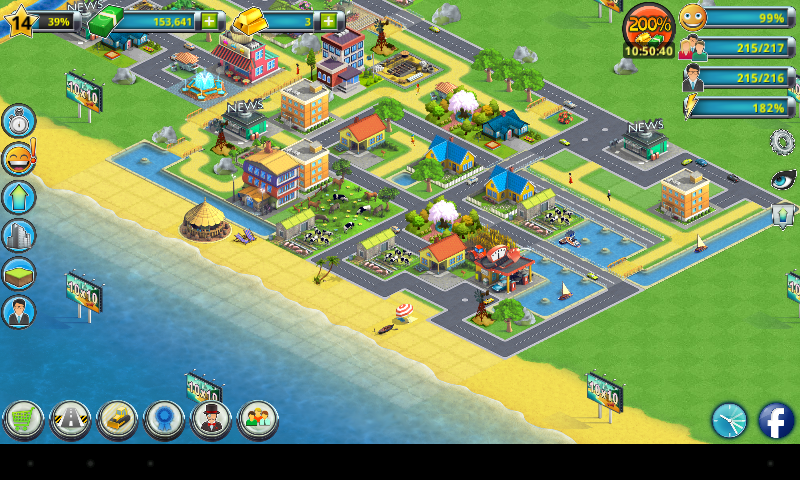 You have an easy-to-use menu with a Shopping Card icon – this is where you go to choose new houses and community buildings to build. The shop has several sections – houses, commercial, community, decorations and power. Each section, or department, contains about a hundred unlockable or purchasable items, meaning you can work hard to unlock new building types, or buy them via in-app purchases. 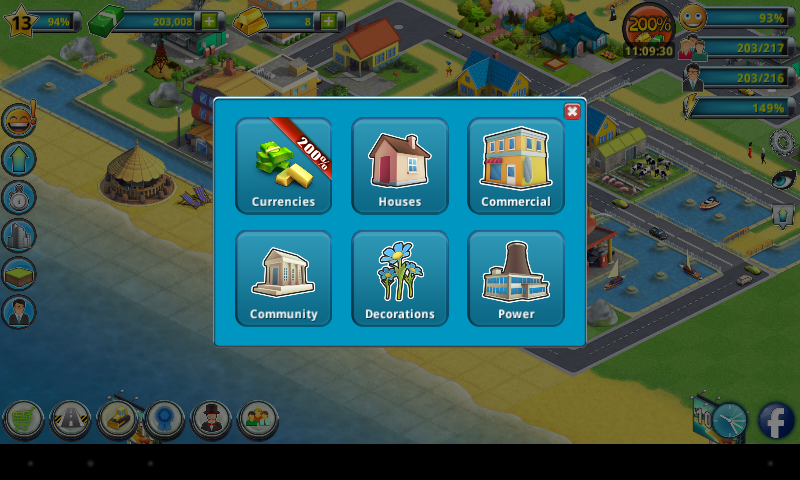 There is a great variety of houses, condos, villas, apartment buildings, and gorgeous beach condos, with patios, yards, you name it. Commercial department contains a large variety of money-making entities – from farms to bakeries, gas stations, bars, hotels, fashion shops, international banks and currency exchange centers. Community department offers a great selection of items that bring happiness to your citizens – parks, schools, hospitals, libraries, city squares, monuments and everything that turns a scattered set of farms into a civilized community. Decorations are really great, with a fine choice of trees, flowers, palms with or without hammocks, fishermen boats, beach chairs, and more.

If you play for the first time, chances are you might want to do a restart, since it takes an architect’s mind to see how to build a city from scratch, so that every part of it is connected to other areas and neighborhoods by roads, walkways and water channels, leaving enough space for decorations, parks, residential areas and commercial buildings.

The first twenty or so levels are pure fun – you build, reap profits from commercial entities, upgrade residential homes to provide rooms for more people, and create more working places. Your citizens are happy, and sometimes all you have to do is tap the money, smiley and gift icons popping up like mushrooms after rain.

There is a city advisor, who knows where you need to catch up – working places, housing, or community projects. At the top right hand corner, you see bars that indicate how happy your citizens are, how many of them you have and the like stats.

On the left hand side, you will see icons that keep track of your collected goodies – XP, smileys and gifts. Unlocking a set number of smileys, for example, grants you a set number of gold bricks. The gifts and XPs also need to accumulate before they grant you a level up, cash or gold bonus. Overall, the process does not take too much time, especially considering the game-play is enjoyable, so waiting till you can earn enough cash to build something is not boring.

On the right side, there are several options that allow you to view the city map without buildings, just the grid, which is great for when you need to add roads, canals or walkways, or move a tree. Next to it, there is an option, which displays which buildings are at which level. Thus, you will be able to see which residential home or shop you need to upgrade for more productivity or capacity.

Navigation is smooth; controls are responsive; zooming in and out is seamless and provides for precision and overall design beauty. The graphics are colorful and eye-catching. To make the atmosphere more realistic, the game adds walking, sailing and driving citizens, kettle, and a fine catchy sound score.

The only feature I seem to be missing is the ability to switch places when you need to move two objects, when you see you have placed them badly. Alas, you would have to think twice whether you want to do that because you will have to either have a free piece of land to move there one object until you relocate the second one. If land is a deficit, you will need to demolish one object, relocate the second, and build the first one over again, losing its upgrades.

As is the case with such games, City Island 2 will either have you pay real money at some point in the game, or put your patience at test. The first budget issues arise when you have purchased a few additional pieces of land, which is one of the most expensive assets in the game (makes perfect sense). If the first adjacent piece of land costs 130.000 or so in-game cash, the next one will set you off 450.000, which is going to take quite some time to earn. This is when you start facing social issues – citizens need working places and housing, but you lack land, and at the same time have to upgrade the existing buildings to be able to house and give work to more people. Each next update costs more cash, while the working places surplus is usually 1, which is a pain when you need to allocate 20 unemployed citizens.

Nonetheless, you spend hours in the game without even noticing it, and before you know it the game rewards you with cash and gold for spending X hours playing.

City Island 2 is a typical tycoon game with many virtues, which make it a success with gamers. Attractive graphics, soothing soundtrack, smooth game-play, plenty of content and rewards make up for slow progress once you reach a certain level. The game is a perfect fit for the fans of the genre, or anyone willing to try a city building sim and not get disappointed. At the same time, if you’ve already had enough of tycoon games, you are unlikely to get overly wowed by this title.

The game’s main appeal is how immersive it gets – you can spend a lot of time playing without getting bored, by simply upgrading and collecting cash and XP until the moment you can buy another cut of land, and unlike many other IAPs-based titles, gold is not too hard to earn, so chances are you will find yourself coming back to City Island 2 frequently.