Collect resources, build structures, assign workers, create an army, win wars — these are just a few of the things you get to do in Naquatic’s new mobile clicker CivCrafter which hit the app stores a few days ago. In the few days since it’s release, CivCrafter has already seen quite the positive response, averaging 4.5 stars on Apple’s app store (8500 ratings), and a 4.7 rating on the Google Play Store (1200 ratings). Let’s find out if it really lives up the to the hype!

I haven’t played a ton of clicker games, but the last one I can remember that actually had some moderate success was Bitcoin Billionaire, which I reviewed back in November. Although I liked that game, I felt it was a bit over-rated given the rave reviews it was receiving. When I first saw some of the Gameplay for CivCrafter, there was just something about it that stood out to me in a way that BCB didn’t, and I was instantly intrigued.

Visually, the game is very smooth, and has it’s own flavor of retro graphics that is easy on the eyes — providing a very enjoyable environment for building your new civilization. A small portion of the screen (roughly 10%) is dedicated to a small visual window that displays whatever you’re currently working on. For example, if you tap to build 10 new houses, you’ll see 10 newly constructed houses appear on screen. This window is constantly scrolling, which eventually pushes anything you’ve built out of sight, but this simply allows you to focus on what is currently being built. 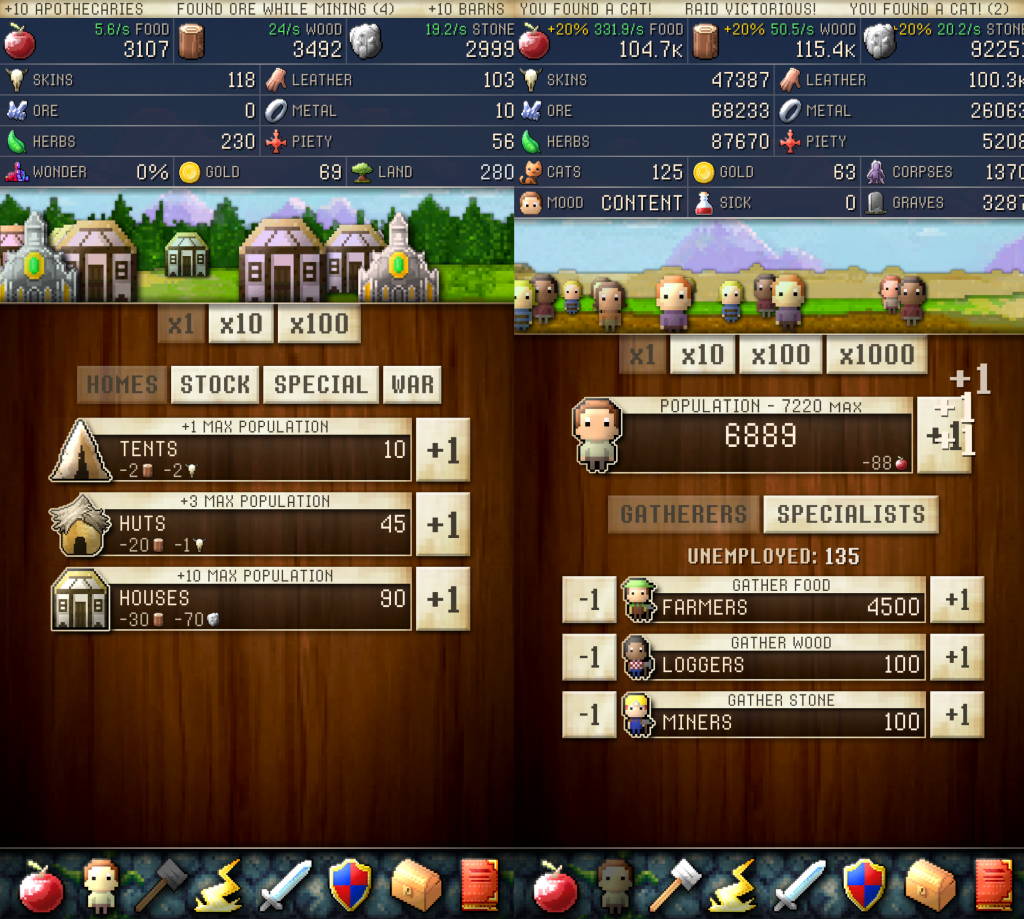 One thing I felt was missing, was some sort of constant visual that would sort of display your progression. Similar to how Bitcoin Billionaire eventually had you upgrade certain aspects of your apartment, to help signify your accomplishments. The only thing you really have that is slightly comparable, is your resource counts which go from single digits up to millions after you’ve spent enough time playing. You will eventually get to build better versions of certain building types, for example, you start out building tents to increase max population, but eventually you’ll build mansions which are a bit more rewarding to see appear on screen.

There are so many different things to keep track of in CivCrafter, that it is really quite overwhelming at first. However, you just need a bit of play-time before it all starts to come a bit more naturally, and you start to remember what all of those little currency icons actually stand for. Essentially, the resources are split between three primary ones, six secondary ones, and a few others that aren’t necessarily a resource (like cats, for example), and determined by slightly different means.

You can farm the three primary resources: food, wood, and stone, all by yourself — simply by tapping the large icons on the first tab. If that were the only thing to do, it’d be pretty boring, which is why you take the first chunk of resources you farm and invest them in housing, workers, and research. Once you start getting a few people working for you and collecting all of the resources passively, you can focus more on planning a strategy to build your civilization as quickly as possible, and to be as strong as possible.

Secondary resources are obtained essentially the same way primary ones are, but it is a bit more random. You’ll actually acquire skins from harvesting food, ore from stone, and herbs from wood. After that, you’ll need to assign workers to certain specialty roles that allow them to passively convert these resources into leather, metal, and piety. All resources can also be obtained by winning battles, and you actually get a pretty large quantity in a very short amount of time — but at the cost of some of your population.

Keeps you checking in

The majority of your time spent playing the game will be building houses and structures, as well as adding to your population while resources are obtained passively. There are also a few different things you can research, which usually take several hours to complete, but can be researched while the application is not open. Resources that are passively farmed by workers are not obtained while the app is closed, so don’t count on that. Between these two mechanics, it provides a healthy balance of being able to play the game for a few minutes here and there, and then having new features come about due to the research every day or two. 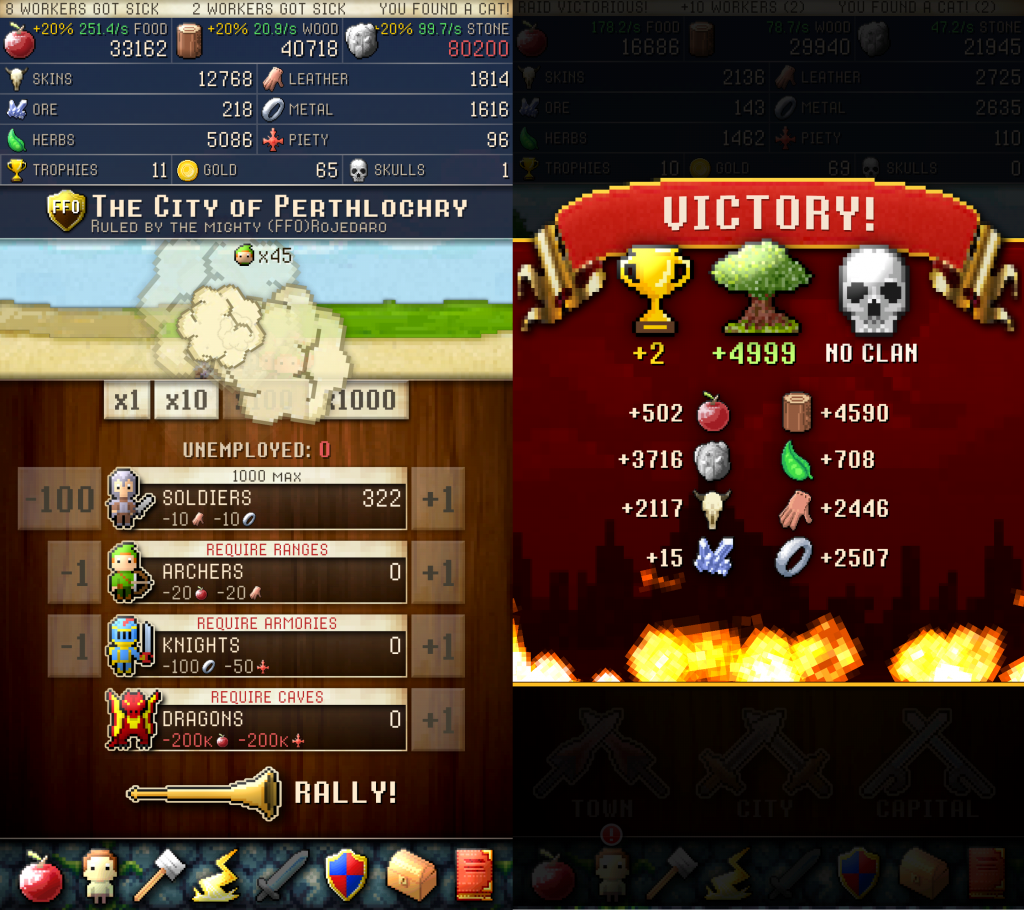 Eventually you’ll reach a point where there isn’t a whole lot to do other than exhaust your fingers creating a single new citizen, or wait various time increments to create x amount of citizens or some other structure. In my experience, I currently have a pretty solid stock of 500K+ wood and stone, and am just creating 1,000 new citizens every 10-15 minutes. When I get my new citizens, I add 600 new farmers and 400 new units to my army — and that’s all I’ve been doing for a while now.

Although the game does turn into a bit of a grind later on, there’s still a pretty solid replay value that it holds, and you’ll want to check the game at least a few times per day to start building a few more sheds or create a few thousand citizens. If you are able to get into a good clan and be competitive on the leaderboards, that is another good way to add to the excitement. It would still be nice if there were an update that helps remedy the situation that players such as myself are currently stuck in, where you can’t do much to progress other than slowly create thousands of new citizens.

Among the many currencies in CivCrafter, there is just one that can be purchased — Gold. Prices range from special $1 deals that grant ~125 gold, up to 20,000 gold for $100. Gold is never a requirement to play the game, but can be used for two things: speeding up wait times, and buying special secondary resources (skins, metal, herbs, etc). You can get 1000 of any of the six special resources for one gold, which ends up being 100,000 per dollar. All of these resources are very easy to obtain via battles, which makes them not so enticing to spend your gold on.

The cost to speed something up is scaled by the amount of time remaining, and the cost will go down as the time to wait decreases. To speed up a 24 Hour timer, it will cost around 250 gold, a six hour timer roughly 75 gold, and a 5 minute timer would be 2 gold. One thing that you’ll likely yearn to spend some gold on is adding to your population, which ends up being 4 gold to instantly create 1,000 new population. Gold can be acquired from rating the application and leveling up in the game, but this isn’t a very reliable source of gold income.

CivCrafter is a game that is guaranteed to keep anyone who can enjoy a clicker game fully entertained for a couple of hours at the least, without spending a dime. The constant mystery of what you’ll unlock next is a big driving force, as well as climbing the clan leaderboards to see who can score the most trophies. Eventually there’s a wall you’ll hit that requires either some cash to spend, or a plethora of 15 minute waiting increments to build your population and army. Still, CivCrafter is a solid clicker game that we highly recommend.