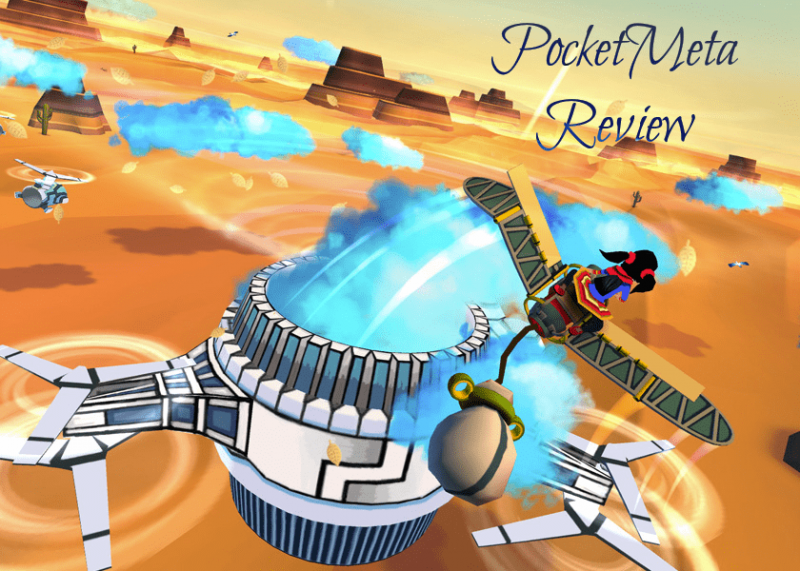 This is no imaginary stuff

Long-awaited and praised before its launch, Cloud Chasers began its subtle narrative on mobile last month. We were anxious to venture on a new trip from the indie game studio Blindflug Studios, the masterminds behind the First Strike. If you haven’t played it, the First Strike had you controlling a nuclear nation on its chase to outrun the enemy and launch the nuclear strike first, eliminating the competition. A strategy game, First Strike dealt with one of the most nefarious problems of the past and present centuries. Cloud Chasers is no different in seriousness, and this time Blindfulg Studios have chosen a more painful premise – refugees migration.

Why migration is more painful than the nuclear problem, you ask? Maybe because a nuclear strike is in the heads of the schizophrenic politicians, but migration is on the agenda of millions of people worldwide. What happens now in certain parts of the world torn by conflicts is more of an exodus rather than migration, and it’s definitely not immigration. Some wealthy countries see more of the migrants, some less, others are comfortably far enough to watch the stories on the news. Few people in either of the first-world countries believe this can happen to them, too. Life can be full of surprises, you see… 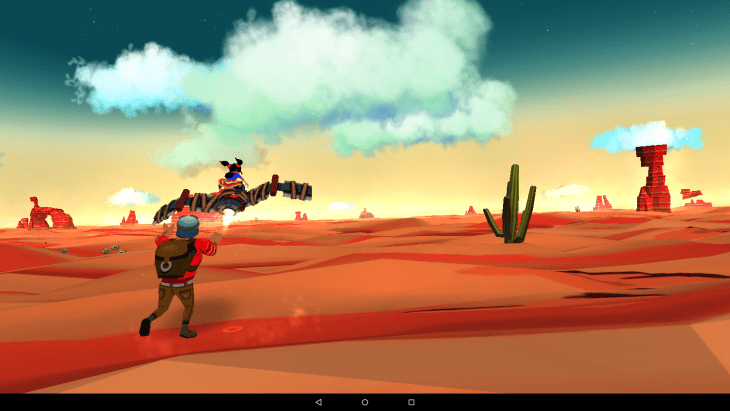 Walking on the thin ice

After the world leaders have screwed up the planet, the nature has turned to dust and stopped feeding its scampish children. The rivers and wells ran dry, endless miles of deserts covered what once was a fruitful land. Francisco and Amelia are father and daughter traversing five deserts on their feet in the hopes of reaching a new Mecca, a city where life in a community is still possible. The wealthy have constructed their new floating cities high in the atmosphere, and their cloud harvesters are scouting the skies, sucking in all the humidity they can find to purify it and produce potable water.

The poor are slowly dying – on their fruitless farms, in the caves, in decaying cities and in the deserts, as Francisco and Amelia, trying to find a place to live.

I would describe the gameplay of Cloud Chases as walking on the thin ice because every minor decision may be the last one, just like in real life. The difference is you can restart the game and try again. Real people of flesh and bones can’t. 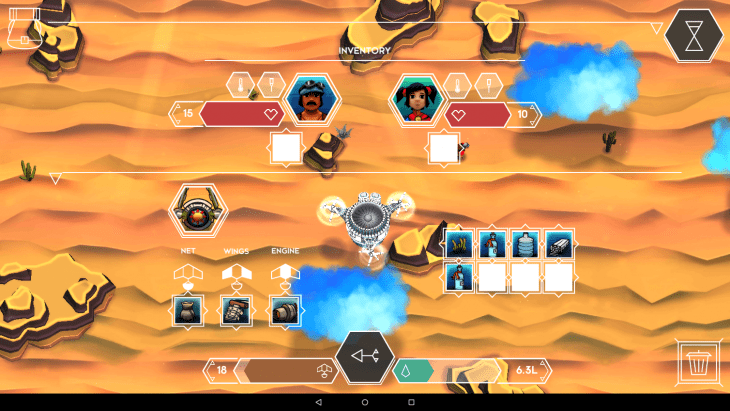 The basics of the gameplay remind me of Out There, but in the desert. The two travelers can carry only 10 l of water with them. They have a backpack and a glider Francisco drags behind him. Whenever they see the clouds, Amelia mounts the simplistic steampunk machine and flies to gather the water. Harvesting water from the clouds constitutes 50% of the gameplay roughly.

The controls for flying are dead simple – tap on the left and right side of the screen to turn. The thing is the glider turns in circular trajectories, so you will have to get used to the mechanic. One other factor that influences the responsiveness and maneuverability of the glider is its technical state. I have discovered that a MK3 engine changes the maneuverability drastically and had to get used to how quick the glider started responding to my taps. It was slightly dizzying and I ended up killing Amelia. What a wonderful glider that was. 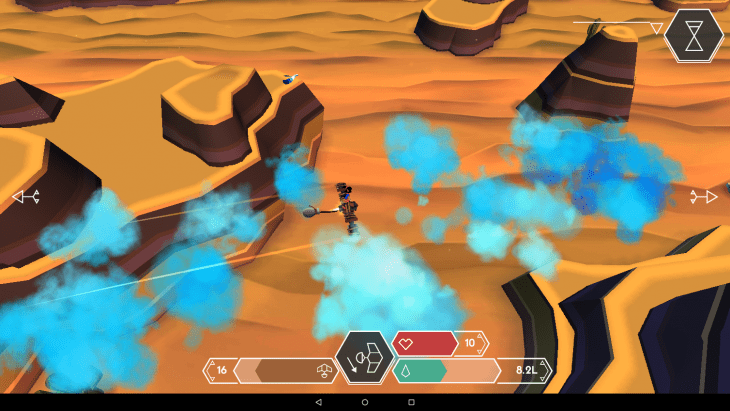 Since we talk about harvesting water, upgrading the harvesting sack increases the amount of the water you harvest in a single go, so whenever you can, choose to upgrade that sack first because you will die of thirst more often than of anything else in this game. 10 l is desperately little, and the moment I see 7 l mark I begin to worry. The thing is, the further you advance, the harder it gets to harvest water because of the aggressive harvesters, the droids. They shoot anyone trying to harvest water from the cloud fields they mine, so quite often you will find yourself harvesting meager drops instead of refilling your sack fully. 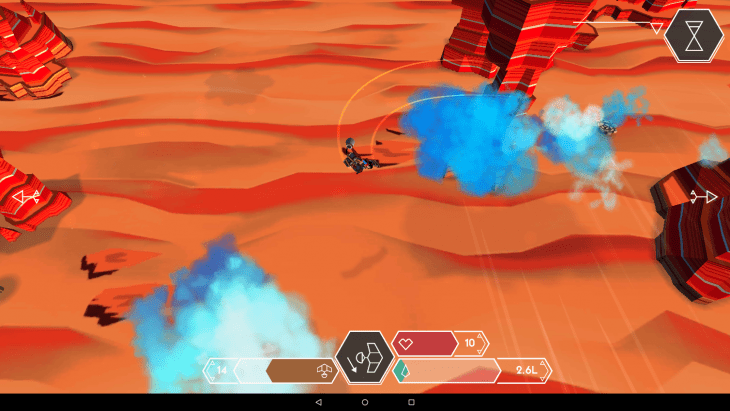 When Francisco and Amelia are not hunting water, they walk across the desert. Tap anywhere to move there. As they advance, certain objects will become visible on the map – houses, huts, caves, cars, plants. If you see nothing ahead, you can tap a button in the top left corner to send a bird to scout the area and see if there is something worthwhile to move towards. Each object represents an opportunity, but caution is advised. Friendly people don’t always mean well, just like the suspicious people aren’t necessarily dangerous. As usual, indifference breeds the worst of problems. 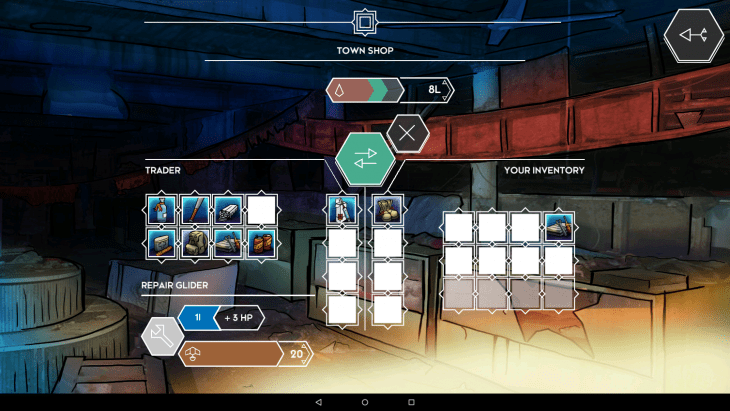 The final touch in each level is a city where you can go to a healer, visit a market place and choose which way to go next. Each situation that requires decision on your part is presented in the form of the text that gives a lot of insight into the people involved and the story of Francisco and Amelia. While the people they meet are usually different because the levels are randomly generated, but the main characters’ story remains the same and each replay offers more insight into it. 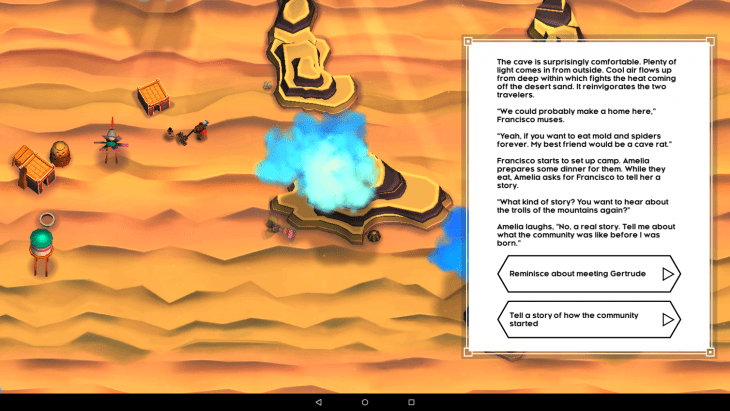 As you play, you find or trade items that go to your Backpack. From there, you can assign them to Amelia, Francisco or the glider, which has three parts – the wings, the engine and the sack. The repair kits go directly to the glider. Apart from the Backpack, the micromanagement is resorted to the Health statistics of the characters. Whenever they get sick, you see their health bars deplete – Francisco has 15 by default, Amelia 10. Whenever you reach a city, the healer can restore that bar in exchange for the main currency – the water.

So, each time you leave the city, you go nearly empty-handed, and harvesting water is an emergency. Each time they die is after a city. Once they got caught by a patrol and sent back to the previous city – that ended them pretty fast. 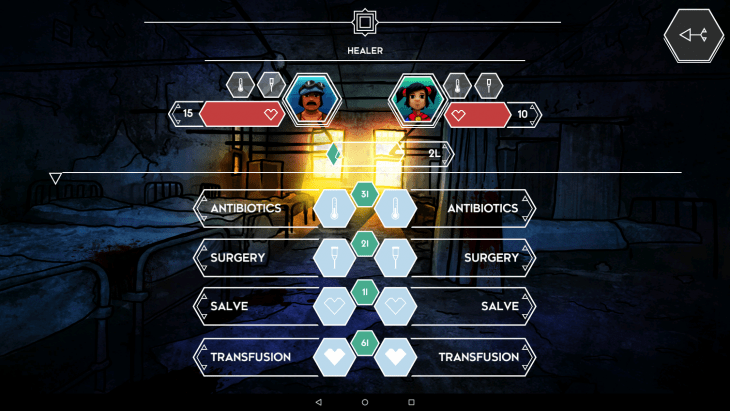 The death is permanent in the way that you can’t keep any of the items you had in the backpack, and each new replay begins with the same defaults. However, each new replay generates a new map, with different people, different opportunities, but be prepared for multiple replays before you get anywhere near the new Mecca.

There is no word about how many endings there are in the Cloud Chasers, but apparently, not every ending is happy for Francisco and Amelia when they reach the goal. It’s a hard game of trial and error, and each death is painful when you lose the hard-earned progress. It’s so Out There! in this regard I am beginning to dread my next gameplay. 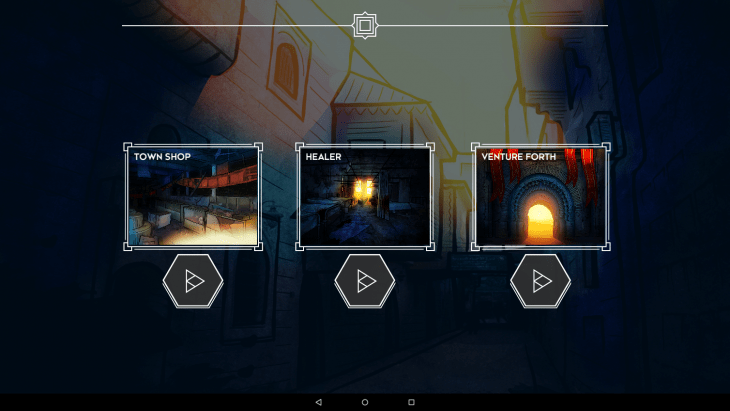 Not so long ago, one of our readers said the way to go for mobile games is to stop chasing the realism and simply look as top notch as they possibly can. This is the case of Cloud Chasers. The colors are mesmerizing, and the multitude of shades of the desert weave a subtle tale of despair, fear and survival to a soft tune of water harvesting. It’s a gorgeous and stylish eye candy, I can’t stop marveling it, and each new desert is a discovery that adds more to the replay value.

I feel this point needs to be addressed even though I haven’t had any performance issues. I saw the user reviews both on Google Play and iTunes complaining about the performance, so I wondered and found a discussion on TouchArcade forums, where the developer Jeremy Spillmann explains what was causing the bug for a specific category of devices. Apparently, the patch has been released in an update already. 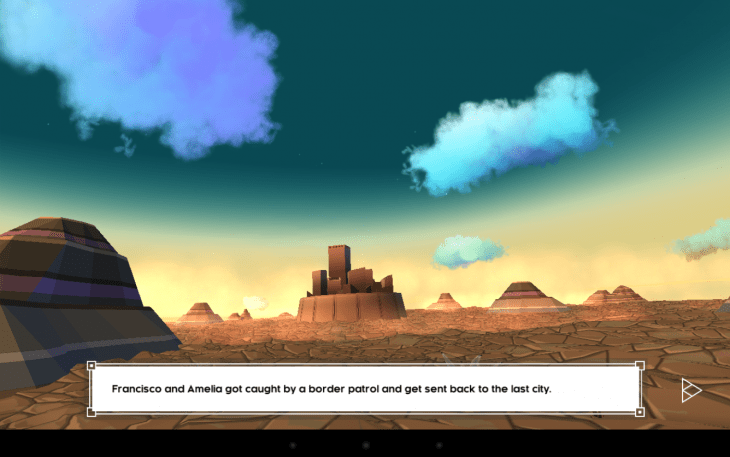 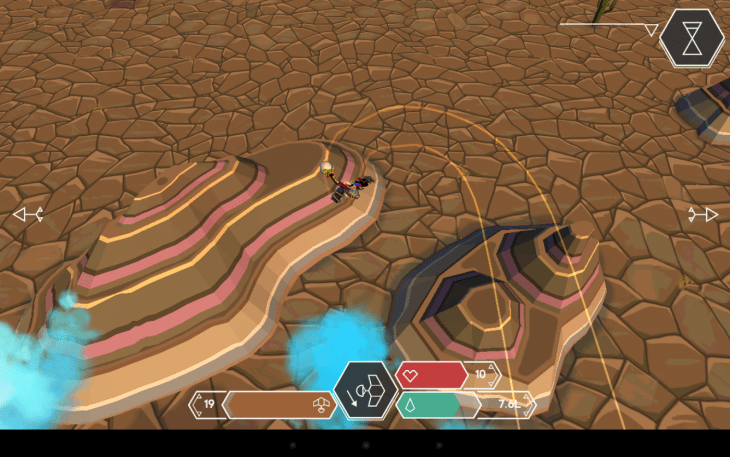 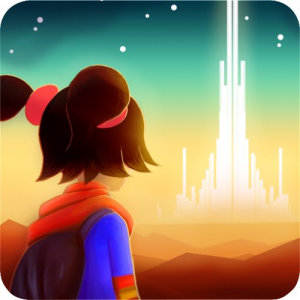 Cloud Chasers is on my list of the best mobile games of the year. It’s visually elegant and atmospheric. It has a strong message, and if I were to make a list of the games with a strong message I would include Cloud Chasers and First Strike alongside This War of Mine and Plague Inc. Nonetheless, the most important factor in any game is the fun of playing it, and Cloud Chasers is definitely fun and addicting to the right player. Harvesting water is a beautiful, yet critical mini-game in between the choose-your-own-adventure chapters, as you lead the refugees to the new Mecca. As in real life, your success does not depend on your decisions only, but also on luck. It’s difficult to beat, but it also offers a high replay value and loads of pleasure and food for thought. My favorite thing about this game is it’s emotional and humane. In the world where gore and sex sell above anything else, my vote goes to the games like Cloud Chasers.