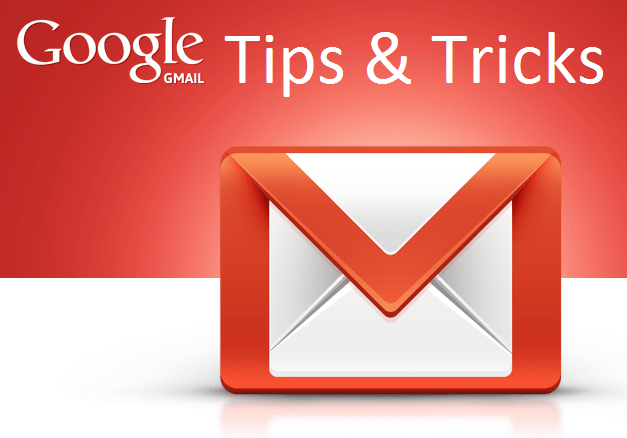 I haven’t had any experience with period trackers for apparent reasons, but my girlfriend has, and when she told me she finally found THE one app, I did not realize how big a thing that was. A few weeks later, she reminded me that app might be a good idea for a review, and when I shrugged again, she used the most elaborate verbiage to explain why that was important, and what an insensitive and arrogant gringo I was.

Apparently, not all women like pink stuff, and when I browsed the period tracker apps I hated to admit they tend to use a lot of pink attire in their design – leaves, flowers, stickers, pens and notebooks with stickers – it’s all very pinky and girly. 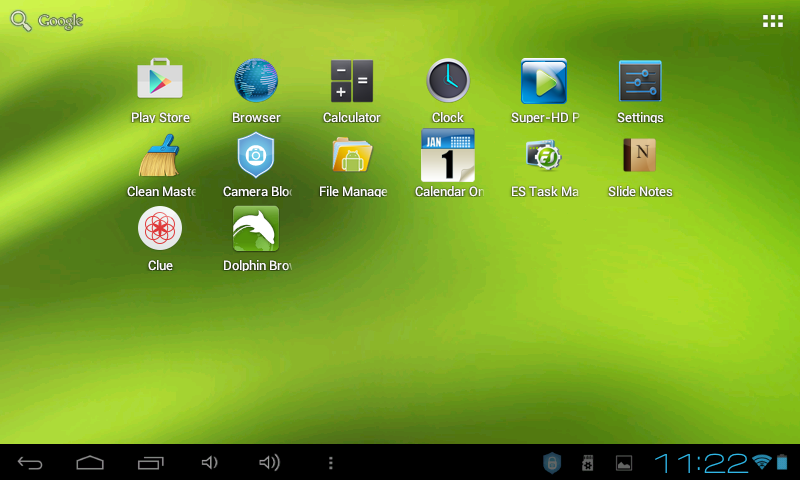 Clue’s developers, on the other hand, have come up with what seems to be a very professional app with a specific purpose aimed at adult women, not teenage girls (which does not mean teenage girls can’t use it). So, it doesn’t have anything that’s pink in it. Neither does it have PERIOD TRACKER title anywhere on your home screen, or inside the app.

As a result, you just get a nice looking, but inconspicuous icon on your home screen that does not suggest the app is a period tracker, indeed. The same thing is true for when you open the app and start browsing it – if I were to peek at my girlfriend’s tablet over her shoulder, I wouldn’t have guessed what it was – it looks like some fitness tracker. 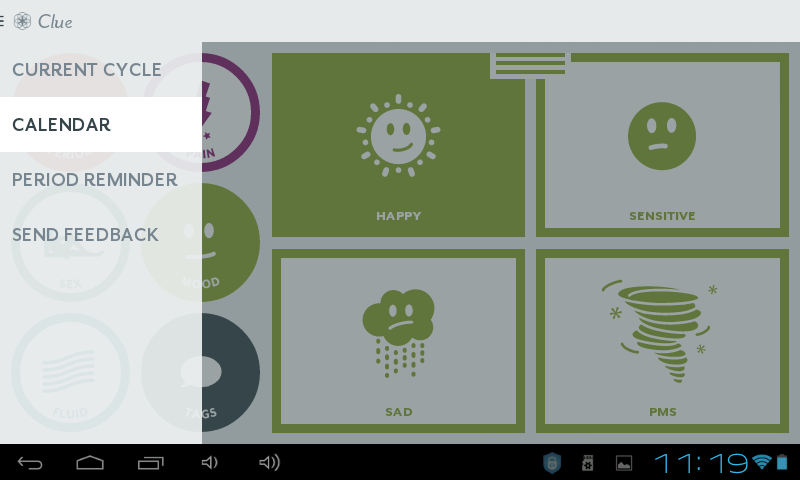 The app is simplistic and seems to cover the most important aspects of the cycle – mood, fluids, pain, sexual activity, sexual drive, tags and days of your cycle.

You can input the data for the previous months manually, and the app will calculate your next cycle according to an average estimate, based on statistics and science. Nonetheless, if your cycle differs from that of an average, you can manually change some parameters as you launch the app for the first time – the number of days you usually menstruate, and the like.

The scientific app is not without a sense of humor – I really laughed when I noticed how the ‘sex’ tab had a gent without a tie for ‘unprotected sex,’ and a gent with a  tie for ‘protected sex’ while ‘high sex drive’ has many-many little gents depicted. 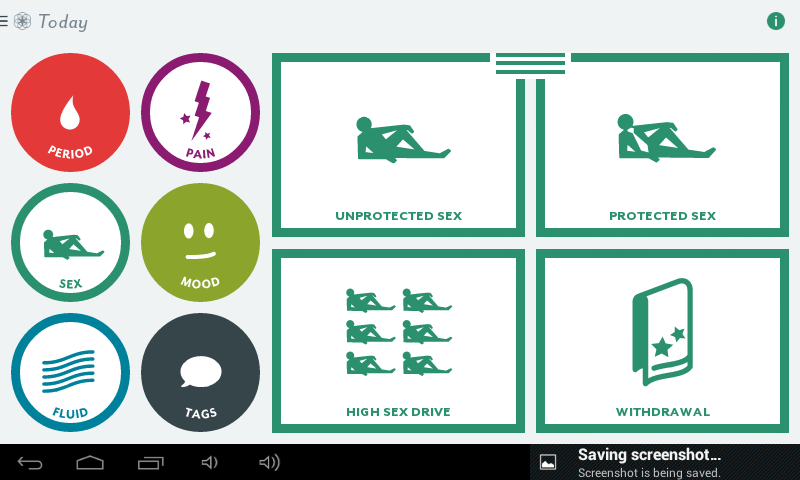 In the Mood section, you can mark the mood for the day as happy, sad, sensitive and PMS. In the Pain section, you have a choice of symptoms like cramps, headache, ovulation pain and tender breasts. The Fluid section has four kinds of cervical fluids- egg white, creamy, sticky, atypical. Truth be told, this is where I got to use the Info button for the page, which explains why it is important to track cervical fluid.

Apparently, this is important for anyone tracking their fertility days, and speaking of which, Clue displays the fertile days on your Calendar, too. 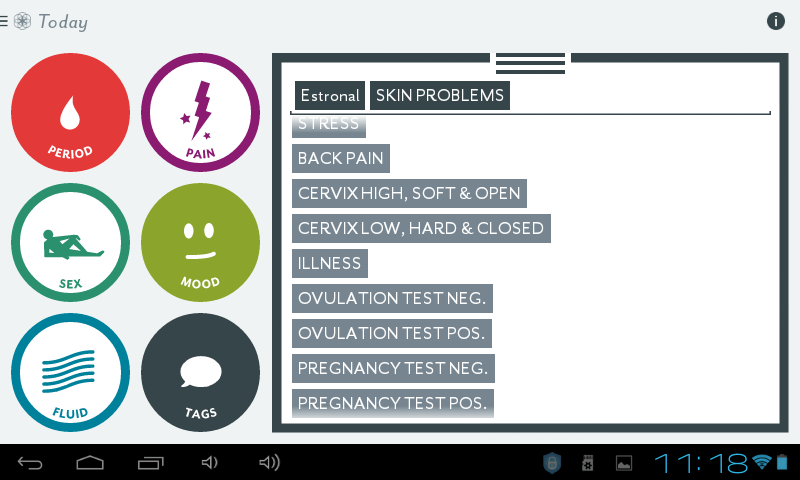 The Tags section is probably the only thing you can customize, and it has a list of tags by default, but you can add anything you feel is relevant. My girlfriend adds the name of the pills she takes to soothe the cramps, for example. But you can add tags and mark mood for every day of the month, not only the period days.

The Info button is present on every page of the app, so whenever you feel you could use an explanation – voilà! Nonetheless, all the icons used in the app are more than self-descriptive, and once you go through the app once, you won’t have trouble understanding the graphical representation of the period. 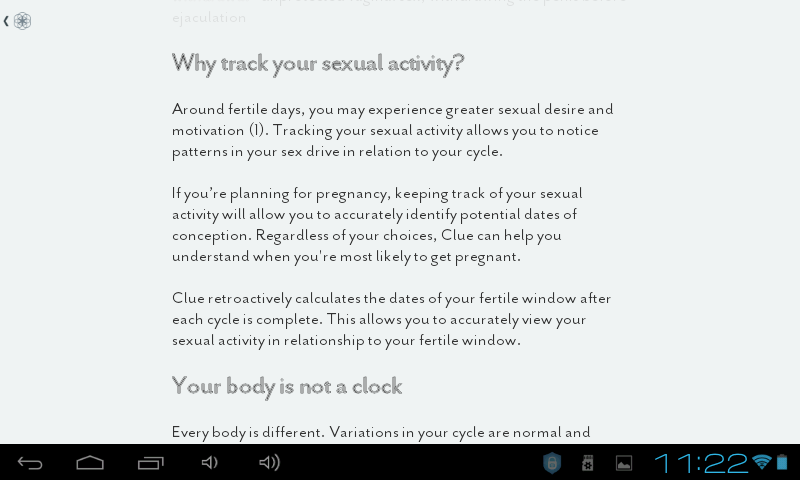 You can set a Reminder that will remind you of your next cycle 2 days prior to the cycle.

The Current Cycle page looks clean and easy to understand – a bright circle on white background with another circle in the middle telling  you at which point in your period you currently are. You can see your fertile window further down the circle. 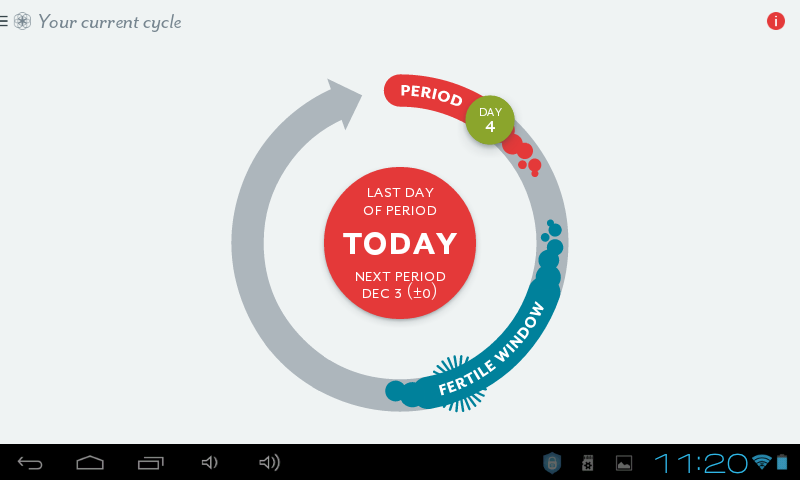 The Calendar view looks neat – a color-coded month view of your period, where Red stands for period, blue stands for fertile window, a Blue Sun stands for an estimated ovulation date, white clouds for PMS. Also, Clue estimates your future cycles, and you can see the estimation in the upcoming months, where the only difference is the days are not fully color-filled, but the circles of respective colors mark the days. 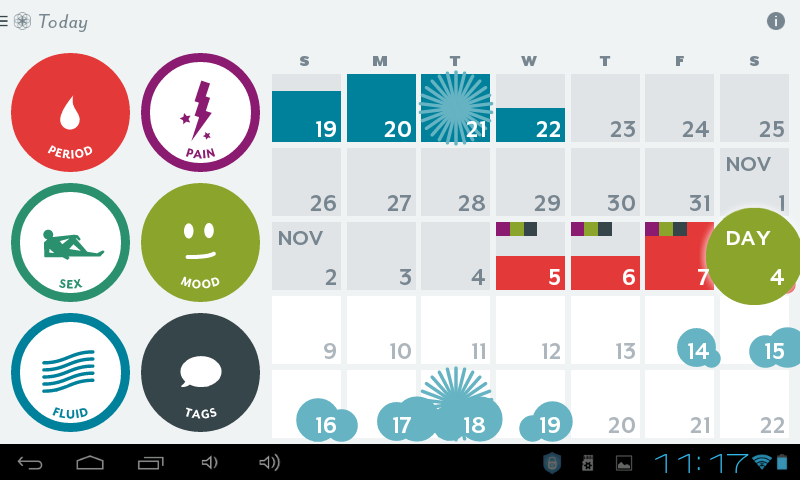 Notably, whenever you mark your sexual activity or sexual drive in the calendar, the app simply adds an inconspicuous little square to the day, and I can’t define what color that is – indefinite.

The app is beautiful by all standards. Its style is flat, simplistic and clean, which means it will look perfectly at home on every device, including those running the latest Android 5.0 Lollipop.

The icon looks stylish and one would never guess what the app’s purpose is. A Room to Grow

It is not immediately clear how you can edit the data you input incorrectly, but I figured it out. For example, if you input a Day One by mistake, you can simply go to that day again and uncheck the Period tab. Automatically, the day stops being a Day One, and become a Day 28 of the previous cycle.

There is one feature missing, though, and developers say it’s the next update they are working on – data sync and transfer, so that the ladies can use the app with the same account on multiple devices, or transfer data from an old phone to a new one, or avoid losing data when doing a factory reset of their phones. 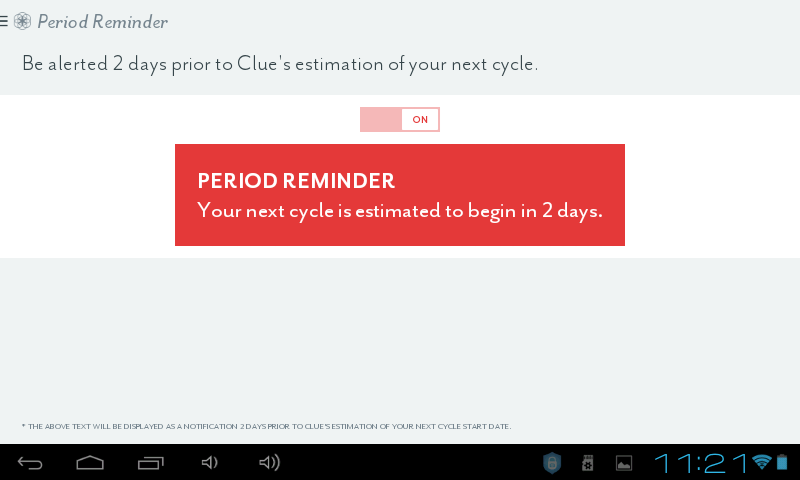 The app keeps reminding you that it does not replace birth control, but it does help in many other ways. It can easily explain why you are highly sensitive, or extremely aggressive – PMS. It can show you how your sex drive is connected with your fertile days, so you can either proceed with the family expansion project, or on the contrary, be extra careful during your fertile days.

The app can also help you pinpoint anything abnormal, and it definitely helps during your visits to the doctor, if you have fertility issues. By the way, this TechChrunch Clue story ‘How We Got Pregnant and Broke Up On the Same day’ is hilarious. 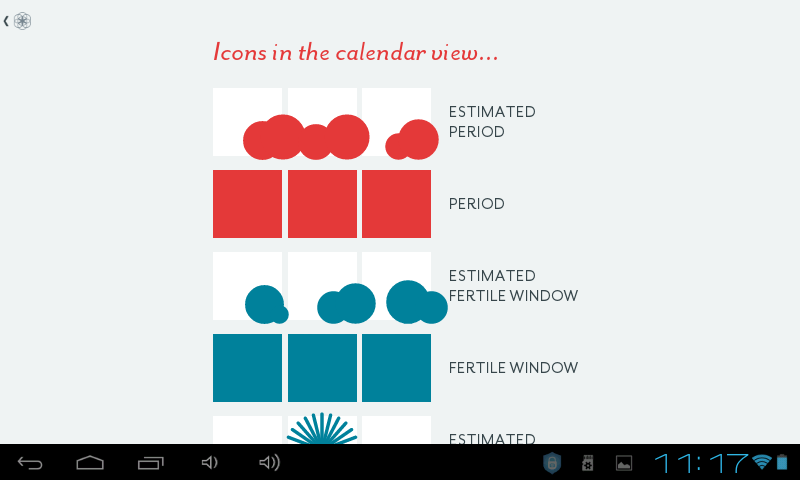 Clue is a beautiful, no-nonsense, functional and seriously simple app for women. It makes period tracking a no-hassle procedure – all you have to do is launch the app when the time comes and mark the days and symptoms. The app is smart, and once you enter the data for a previous month, it estimates your next cycle based on stats average, which can also be adjusted to be more accurate. It is intuitive, fast, simple and functional, helping you control your fertility, ovulation and birth control, too.

Ok, now I get how important a period tracker can be and how neat it is that Clue is not pink, or cute.