Remember Tarantino’s Kill Bill, where Kiddo trained with that sadist Sensei? Clumsy Ninja is a kid version of that episode.

I am no big fan of the virtual pet games since I have a gang of kids in the household, and I’ve no deficit of smaller people who need to be fed, played with, washed and put to bed. So, games like Pou, Tamagotchi, Talking Tom and the likes of them have been beyond my interest until this one came along. Clumsy Ninja has been on the app market for a while now, but it popped up on my radar past week when it got a major update. I admit I downloaded it for the kids, but it turned out to have a charm that works on grown-ups, too. Let’s take a closer look at it.

You don’t play AS ninja; you play WITH him. He’s a teenage kid with huge and honest eyes, wearing a karate suit. He lives in a sort of a ninja training village with his Sensei. As the game progresses, you unravel a heart-breaking story – it appears our little fellow had a girlfriend. Well, she is a girl, and a very dear friend of his. She was very good at all stuff ninja, and she knew how to kick some butt.

However, her skills weren’t enough to escape an evil kidnapper – we don’t see his face, and all we know he must be a ninja, too, because he had a huge ninja sword.

So, now your buddy needs to train to become a brick slicing death machine to find and save his friend, but before that there are months of training.

You can tap on his arms and legs to make him move; you can lift him in the air and spin him 360 degrees; you can tie a ton a balloons to his feet and send him off to space. You can push and tickle him, make him walk from place to place wherever you tap. He’s a patient sport, and sometimes he would give you a look full of irony, or aggravation at your sadism, or brutality.

The main point, however, is to train him, and that is a lot of fun. There are several items available by default that you can use to gain the precious XP points – trampoline, balls, watermelons, kicking sack and wooden boxes. Basically, the guy does the training while you only have to assist him. like hold the sack for him to hit, or kick a ball in his direction and watch him run after it, trying to kick back.

The fun part is the ninja is clumsy, indeed. The better part is he is evolving and mastering all those skills as you play with him, so the progress really shows, and it’s one of the main appeals here.

At first, he’s pretty much like Kiddo after 5 years of coma – barely balancing and extremely vulnerable. Touch him and he’s falling.

Speaking about levels, there are about a hundred of them, as far as I’ve seen, which is both a good and a bad thing. The good part is our fellow is going to develop some bad-ass karate skills; the bad part is the promise of a rescue mission to save the girl, and it never seems to start.

As a result, my youngest nephew voiced my most dire suspicions – when do we get to save the girl? What if she is hurt?

Seriously, developers didn’t think this through, and when children start asking serious questions, it can put adults in a difficult position. I tried explaining that it was only a game, and no real girl got kidnapped, but when you’re talking to people who believe in Santa Claus, it doesn’t help much. So, now while the game is still a treat for the kids, they get very happy playing with the ninja, but very sad when after yet another playing session they haven’t proceeded with the rescue mission a tiny bit.

The game is an overall fun, even though training tends to get a bit repetitive, but since your ninja’s progress is noticeable, each training is never the same. What concerns me, though, is how the game does not punish abuse on the part of the players. I am not concerned about the big girls and boys fooling around with a piece of code. I am concerned about young children playing a game, which does not explain the difference between the good and the bad, and children take it as a norm.

If a child starts kicking and pushing his virtual friend, and the game awards him with coin, while the virtual friend, or pet, is not visibly hurt or offended, does not leave, does not cry, and seems to be overly forgiving, the next time you see your kid torturing your dog, don’t wonder where that behavior came from.

Clumsy Ninja has two kinds of in-game currency – gems and coins. Both can be bought or earned by playing, even at a much slower pace. Overall, you can play without paying real money, but buying a handful of gems for $3 will make progress significantly faster. There is a great variety of gems and coins packs, as well as seasonal perks, so study your options before you hit ‘Purchase.’

There are also ads you can watch to get some coin, or share some of your in-game progress on Facebook to get rewarded on a one-time basis.

Clumsy Ninja is a visual delight in everything from the realism of the protagonist’s moves and behavior, to his looks, the environment and the objects the two of you will interact with. The anime style is not my favorite, but I must admit the design here is superb.

The sound score is non-intrusive, and lets you focus on the gameplay – nothing catchy.

The user interface, has a smooth learning curve, but if you install this game for younger children, take the trouble to guide them through their options. 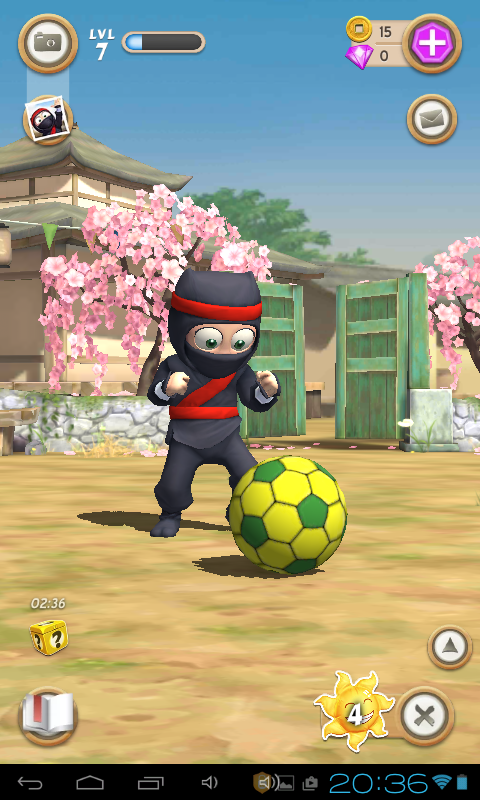 Levelling up without paying real money does involve some repetitive grinding, but since ninja masters his skills, you will see him progress, which is very rewarding. The ways you can have fun with your virtual friend are limited by your imagination only (it sounded wrong again), and the missing girlfriend story will keep the most sensitive coming back for more until the end. 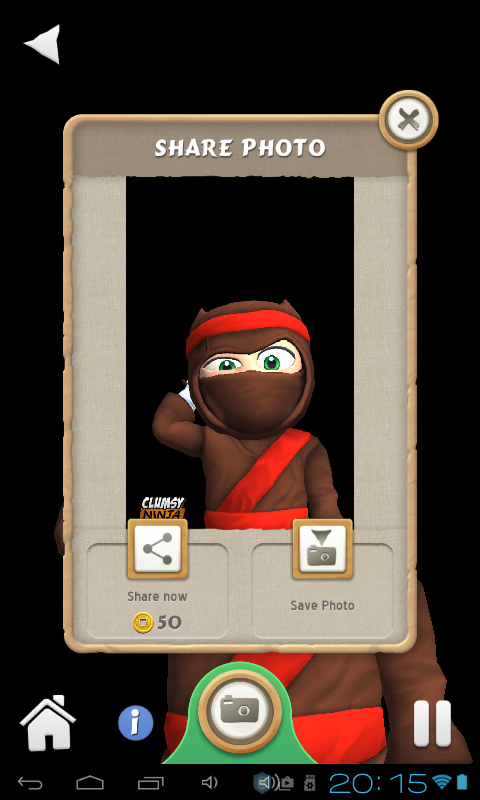 Clumsy Ninja wants to be your virtual friend, and it succeeds in this task admirably. If you’re a grown-up, there are plenty of ways to spend some time giggling. If you install the game for your kids, expect some serious addiction. I would not recommend you leave your children playing unsupervised for too long, though, because the game may encourage violence, which is my main concern.

It looks great and does not freeze, or lag while the UI has a very mild learning curve until you know where all the items and mini-games are. Don’t forget to let your ninja have brief naps on his mat, train him diligently and the two of you will be rewarded with more skills and more items to play with. IAPs are tolerable, and even though a lot of care and work have been invested in it, Clumsy Ninja could use a little consideration on the part of developers about how the game can impact the youngest players’ perception of violence.