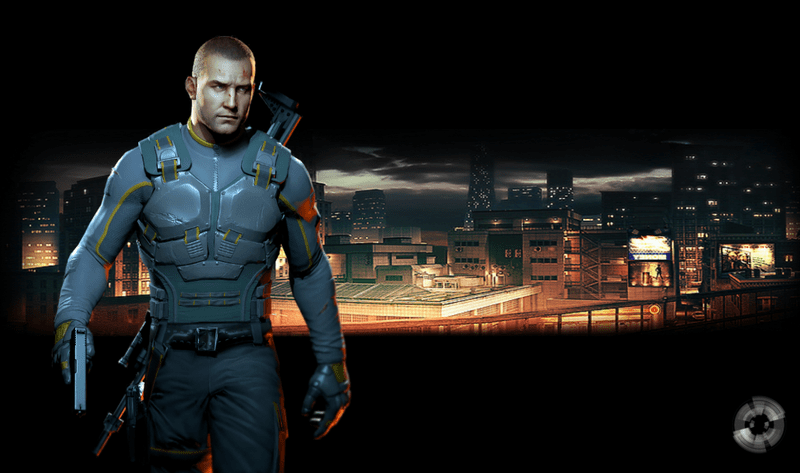 Glue released the next installment of its Sniper games, and players report it is one of the best in the series, with much improved graphics, mechanics and variety. I have spent a lot of time with the game to be able to come up with the opinion I believe reflects many aspects of the game, so read on if you have been wondering if it is worth a download.

Contract Killer: Sniper is a freemium title, which means you can play without buying anything via in-app purchases, but your progress will be affected by how much you pay.

Just like that, the game puts the IAPs in the center of your gameplay. When I buy, I prefer premium titles with zero IAPs, ever, because it so happens that children play my games, and whenever I forget to disable IAPs, I run the risk of getting a hefty receipt at the end of the month. So, there you have it – a gorgeous game with neat design, cool weapons and missions à-la Die Hard by the time Bruce Willis got old and dumb, but it won’t let you play to enjoy. Nah-ah.

Basically, I could have skipped this criterion since there is not much story to a killing game – you are a novice in some sort of private army of killers, and you eliminate the bad guys all over the world. You get a basic rifle and a few easy missions to get yourself familiar with the buttons, and weapon types. That said, the premise is a total write off, but taking into account the genre, who cares about the story when you can shoot a rifle, throw grenades, knives and use cool electric weapons?

You start from the Campaign mode, which is available by default. There is also a PVP, but it’s locked until you reach a certain level in your Campaign. The latter consists of missions, and they differ from one another, thankfully. I thought I would be a sniper all the time, but the game tasks you with missions of ever increasing difficulty, so if in one mission you are a sniper, the next one challenges you with a close encounter, where you will have to use your rifle, throw knives to eliminate mercenaries silently, and even place bombs with timers. The next thing you know you are aiming at some bad guy’s security guards, but you can’t get through to him until you eliminate them all.

The more you advance, the more additional weapons you get to use in your missions, like a bazooka.

The missions require a certain power level from your weapons, and you have several slots for weapons, so some are primary, others are secondary. You upgrade them on a separate basis, and that’s where I faced a nag. My primary rifle had 114 power while my secondary was 102, and I got locked out of a mission for an hour just because the mission would only want me to take my secondary weapon, which was 2 points under-upgraded. No video to watch to get free gold was ever available despite the button. A bug?

You have a neat world map, where the missions are laid out before you, but you can not skip them. You have to kill the bad guys in a particular succession in order to move from North America to Asia and then Russia-based missions.

PvP is very neat, when you unlock it, and the intriguing part is you can assault and burglar other players’ diamonds, so do not forget to collect those stones from your Vault once in a while to avoid the unnecessary disappointments. 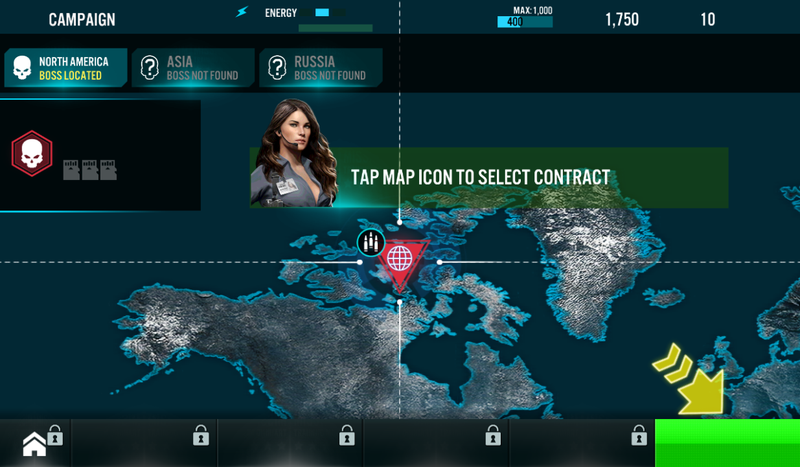 The real fun and the main charm of the game is when you finally get to play, set the boring and tedious weapon upgrades apart. Inside a mission, you can change position, move, change your view angle, and more. You can buck down and aim at the same time, and at the last moment you can change the view to the rifle’s aiming glass and take down the foe.

I totally loved the slo-mo close-ups of flying bullets and dying enemies – a great job on that one. The environments are detailed, and even through the protagonist seems flat, it does not spoil the gameplay. 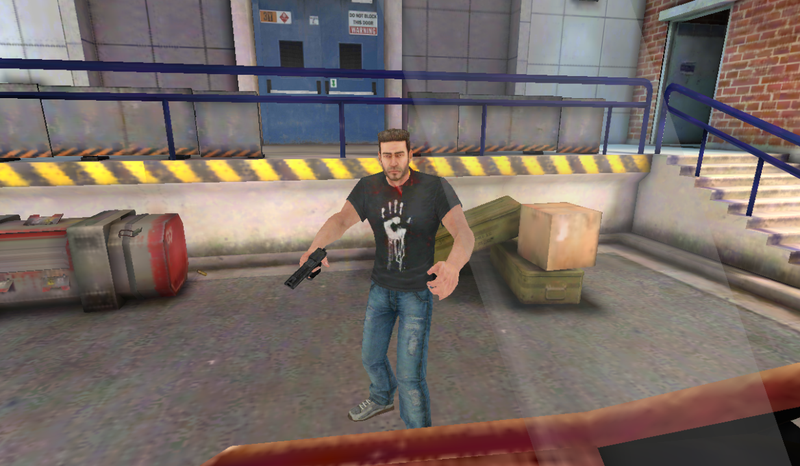 I played on two different devices with a smaller and a larger screen, and I have an issue with the buttons. The smaller screen makes it difficult not to tap on something by mistake while the larger Samsung tablet just won’t load the buttons, so I am seeing black rectangles, and playing basically by hunch. Not to mention I don’t see my own health status.

Other than that, the functions are simple, and before you know it you are perfectly familiar with the UI.

As I said, the environments seem very detailed, and even though it’s not the art exhibition, Contract Killer: Sniper creates the right mood of tension and urge to hurry up. The map is particularly good-looking, and the weapons seem very detailed and impressive. Your protagonist is not Bruce Willis, but provided you don’t look at his mug too often, you can tolerate his shaved head. The girl briefing you before the missions is a typical Lara Croft-style model with weapons. All things considered, Contract Killer: Sniper is a totally male focused app. 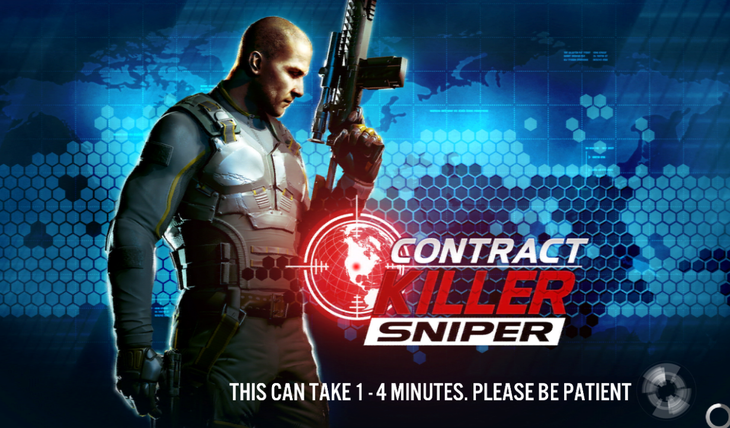 The business model of freemium can get in the way of an otherwise great gameplay. Here, you have Diamonds, Cash and Gold. Diamonds are produced in your Vault, and the latter has its maximum capacity, so unless you remember to collect the stones and empty the Vault, you are stuck with one, max two upgrades, which is insufficient once you pass the first couple of missions. Gold is hard to come by here, and you are supposed to be able to get some free bricks for watching a video ad, but that is never available.

There is one more way you can get the gold for free – by installing an app from a partner, so you are left with the option of installing a third-party app you don’t need. That’s frustrating, especially for a security conscious user. I for one, checked out one app from the suggested partner list, and the app is a Horoscope one that wants you to send a SMS to a short number to activate it (the partner app must be activated in order for you to get the reward). So, by the time you reach the third mission, you are locked out of the game until your vault generates enough diamonds for you to purchase that weapon upgrade.

Speaking of Upgrades – they are plain boring, tedious and at times obnoxious. Each rifle has at least five stats that need to be upgraded constantly, and each upgrade costs a hefty deal of diamonds. More often though, upgrades cost gold, which you can only buy, or try to get by installing an app you don’t need.

As a result, the game basically tells you to chill out and have a drink until the vault generates enough diamonds. 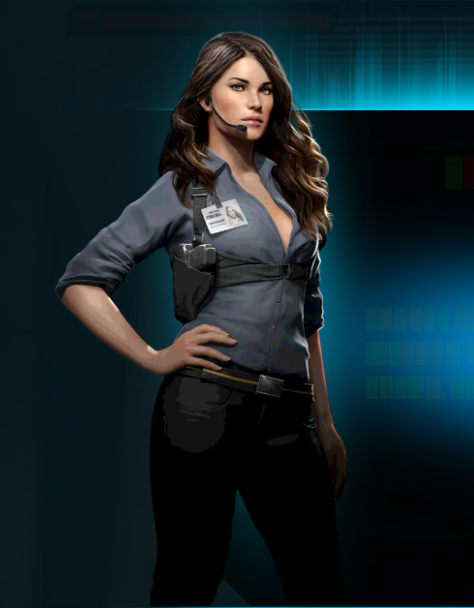 Contract Killer: Sniper by Glue is a thoroughly entertaining, I would even say impressive, first person shooting game, where you are both a sniper, a mercenary, a very special assassin skilled in all types of weapons from knives to rifles and bombs. You have a huge load of missions to purge the bad guys and their security guards while the game is very well designed, with an intense soundtrack that creates the adequate atmosphere. It boasts off some very neat shooter mechanics, but nonetheless, the business model gets in the way of fun, and nearly ruins it. I also encountered a few annoying glitches that interfered with the gameplay. All things considered, it’s a solid game that is fun to play, but heavy focus on IAPs and a few UI glitches can make it quite tedious.