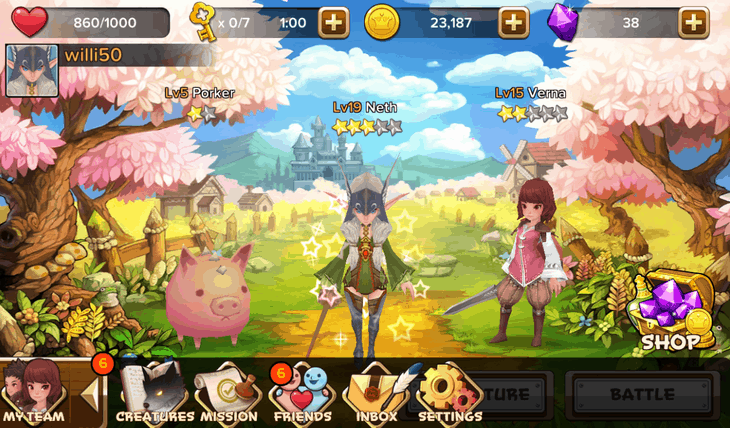 Creature Academy by Kabam, Freemium
Genre: Action
Get it on Google Play
Get it on iTunes

I was not overly impressed with the recent releases from Kabam – Lord of the Rings: Legends and The Hunger Games: Panem Rising. However, looking at Creature Academy, I was willing to give it a try and restore my faith in Kabam. After all, Creature Academy is not a card collecting or card battling game with generic art and no action whatsoever.

To me, the main argument in freemium versus premium is not in the amount of money the developer wants you to pay for their game, although it is also important. What I find more important is whether a game has a heart, or not, because it shows! Games with heart may be aggravatingly difficult, or annoying, but those are the titles you will remember when you tell your Grandchildren about the games you used to play on your good old Samsung, or Nexus, when you take them to a museum of smartphones. All the rest, by indie or mainstream developers, will vanish and disperse in Lethe, the river of oblivion, because they were made with the sole purpose of making money, leaving players fairly satisfied with superficially fun gameplay.

So, which is Creature Academy? Let us see. 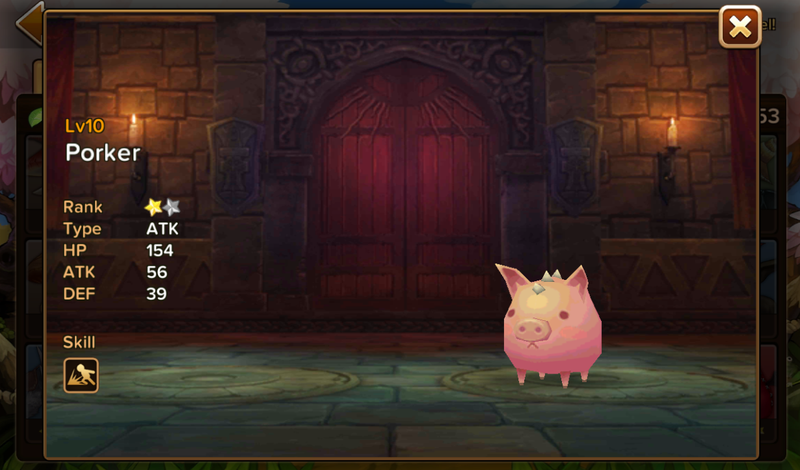 Kabam partnered with a South Korean digital entertainment company Netmarble to work on Creature Academy, which is a very cute and fast-paced RPG. The premise is the Earth cracked somewhere and all hell broke loose, invading our world. Creature Academy will have you tame the monsters and convert them to fight the baddies on your side. That is it.

I can see some monsters that look vaguely familiar, but I can’t tell which fantasy world they come from. There are some Pokemon-like creatures, elves, wolverine-like monster, cowboys, knights, human girls and boys, mushrooms, toads, piranhas, things that look like flower seeds and a whole load of critters I can not identify to say what they look like. One of the most questionable characters I had was a masked guy with an electric tree saw, who calls ‘Tinder’ and looks suspiciously like that Texas Chainsaw Massacre guy. To me, the story is something that is largely missing from Creature Academy because I failed to actually like any particular character for not knowing anything about them. I could only like or dislike the way they look, but that’s not enough to get hooked.

The gameplay is fast-paced and action-packed, but ultimately repetitive. The world is divided into zones, and you have to clear the levels in the initial zones to be able to access further areas. Each round plays as much as the previous – you enter the play zone with your monsters, and one by one, according to your choice, the walk along a path and fight monsters when they face them.

You tap on the screen to tell your hero where to move, and when you see a foe you’d better tap on it to you know, direct your hero who to fight. If you don’t, your monster will fight the oncoming waves of enemies any way, but I found it  more efficient when I direct the battle.

You do not control the jumps, or sword slashing – it happens automatically until the enemy is defeated.

Each level consists of three areas, and you teleport from one to the other through a luminescent portal, which looks neat. At the end of the third area, you have to fight the big boss.

You can change the active hero during the battles, and you will see the other heroes ready meter. Each hero also has special abilities, and you can also invite a friend for some 10 seconds of the most intense action to help you out.

Creature Academy assigns random players to be your friend and help you out during the battles, and this is nice, especially if you do not intend to drag your friends into this. You also need to send some love to your friends, and befriend more players – this is one of the game’s missions.

As in many other games these days, the game has missions you do not necessarily have to stick to, but when you complete them, the game rewards you with some loot.

There are other things you can do in the game but completing quests that look and play alike. You can also challenge other players, and try your strength at Survival mode, where you get to fight endless waves of incoming monsters as long as you can.

I was not overly impressed by either since the battles are pretty much alike – you move about and fight, or get cornered and fight, change your heroes and fight until the last of them gets their energy exhausted.

As I said, Creature Academy is a mish-mash of modern cinema, rather than a modern rendition of ancient mythology. There are several types of creatures, like meadow, water and so on, and as you complete quests you tame more monster characters. There are over 200 of them.

You can only have three active monsters, so you can use the rest to upgrade your main heroes or evolve. Note that you must have two identical characters to evolve one. The creatures you use to upgrade the main characters will get ‘fed’ to your main characters, so don’t look for them in your inventory afterwards (I say this because I see some complain they disappear!). You can also sell your collected monsters.

The cap of monster upgrade is quite low, so in some cases you will upgrade a monster to its maximum potential within your first game session. It has a drawback – you will need to keep grinding for stronger characters if you want to proceed to more difficult levels, but those stronger ones don’t come often, of course.

Creature Academy looks great – there is no denying that. The heroes and monsters are detailed and well drawn; the environments are colorful, but lookalike and serve as a rather standard background for action. Battle effects are spectacular and the teleporter is a delight to look at.

You do not really customize your characters in the sense of dressing up, or changing the hair style – something kids ask for. With the huge load of characters, memorable are only few.

UI is not the most intuitive I’ve seen, but not too complicated, either. I simply suggest you spend a few minutes browsing the menus before you proceed to action. I particularly dislike the levels layout, which makes it really difficult to see how and where you’ve progressed. The soundtrack is fun and catchy, but after a while I turned it off.

The negative things about Creature Academy can be divided into two parts – bugs and the above-mention perks of freemium business model. For one, you only have seven keys that allow you to enter a quest, or Arena. Each key takes about 15 minutes to restore, which is crazy. Supposedly, you can hang around in the Team zone, upgrading, evolving, or collecting rewards for completed missions, or chat with people, but that does not take that much time. Nor is it interesting.

There are coins, and gems, and energy, and keys, and you can grind or wait for them, even though grinding is tedious. Gem packs come in a variety of prices starting from $4.99 and up to $99.99. That said, Arena PvP shows total lack of balance and paying users are free to bully those who grind to play.

Now, to the technical part, and unfortunately, there are unpleasant things to be said here. First, it may not be a con per se, but the game needs Internet connection to run. In itself, it’s not a bad thing, but the said feature just won’t work as it should. I was about to uninstall the whole thing for the ‘Lost Connection’ problem, when other connection-dependent games (including Panem Rising from Kabam) ran just fine. I see this bug being reported by Android users nearly every day, and since the problem persists, we are unlikely to get it fixed soon.

The second issue is the size and the double-decker download – first you download the game, and then you download the 37 parts of the data, which takes forever even with excellent connection and high speed. 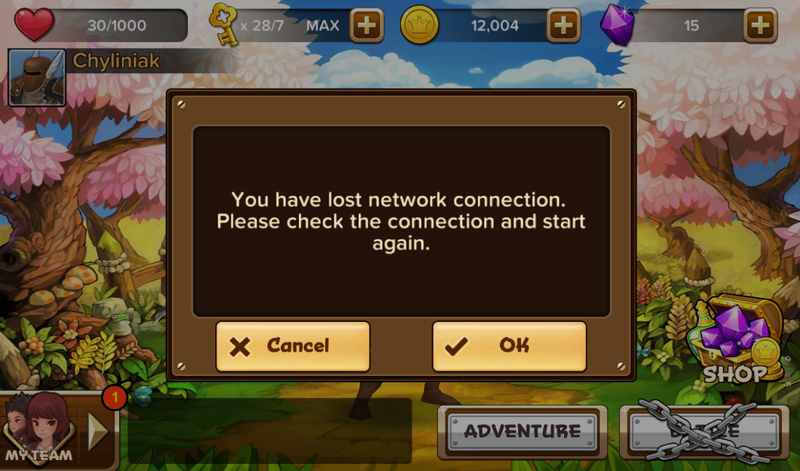 The third is the read and write SMS permission (!?) alongside the app’s scanning your entire device for cheat engines. The app basically runs a scan of your entire device before starting – that, Kabam, is outrageous. I am glad many users have pointed it out and expressed their frustration at the blatant invasion of user privacy. Others just hit Install without ever reading the permissions pop-up.

I am not sure for what kind of software the app scans users’ devices, but some report they don’t have anything unlicensed on their devices, and still the game refused to run.

Next in line is the Lost Connection in the middle of the gameplay while every other app in the background is connected to the Internet, if it needs to. I was able to solve that problem by force stopping the app, and launching again, but it only works when you do it two or three times in a row – not cool.

Sometimes the friend points you send out do not register and users do not receive rewards. Also, the game seems to want to live in your internal storage, not SD card, so unless you have some internal real estate, or are willing to uninstall other games that inhabit your internal storage, you might face ‘Insufficient Storage’ error. Finally, it does drain your battery fast.

Creature Academy is bright, colorful and fun RPG with easy controls and 200+ monsters and human heroes to tame, upgrade, evolve and send out to battle the baddies. It is fun and engrossing, but as the novelty wears off and freemium model dictates restrictions or demands payment, players might lose affection. The battles are fun, and you can move around picking your foes, but each battle ultimately looks like the previous one, and after a while the gameplay becomes boring. The amount of characters is impressive while the design and the sound score is impressive; but if it will be enough to keep you hooked is a question only you can answer. It is not for me since the game lacks background story, and is plagued by miscellaneous technical bugs. You can play through grinding, but it won’t be a reasonably paced progress, and you won’t enjoy PvP against paying users too much if you don’t buy things via IAPs.

All things considered, I recommend you give it a try, but I can’t guarantee you’ll still be playing it after a week.

To answer the question – Creature Academy is one of the best releases of the past week, but it doesn’t make it to my list of Best Android Games of All Times.