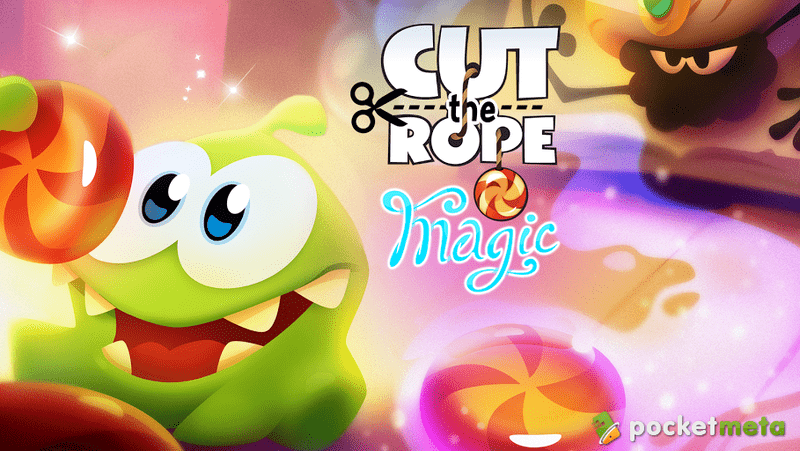 Cut the Rope franchise turned five years recently. In terms of mobile gaming, that’s decent age, and the Om Nom games have become the go-to time killers for adults and kids alike. The related merchandise sells like hotcakes. Blame it on the plush and plastic Om Nom Happy Meal toys for getting another generation of kids addicted to junk food. Healthy eating issues aside, Cut the Rope has been one of those good old classics that remained loyal to its original formula – free-to-play, fun, but not obnoxious in its freemium model. Is Zeptolab sticking to the roots, or has the formula to success changed? Let’s see what this new Cut the Rope game has to offer.

First of all, the looks are fantastic. Even though the toons style of Cut the Rope has always been vibrant, Magic does a wonderful makeover, adding a new coat of paint, more depth, lush colors, shades and textures. It gives Om Nom more “facial” expressions, and even new costumes.

This time, Om Nom gets to turn into several animals to overcome the obstacles to the coveted candy. He gets to become a baby Om Nom, a miniature copy of himself, but lighter and with one tooth instead of four adult ones. He gets to be a birdie, a mouse, a fish, and even a ghost. Each incarnation of Om Nom gives him special abilities that help him solve the riddles and get the candy. For example, the birdie can fly, the small Om Nom is lightweight, the fish can swim – you get the idea. You can switch to and from the special incarnation only a limited number of times – sometimes once, sometimes twice. Figuring out when to do it is a part of the challenge. 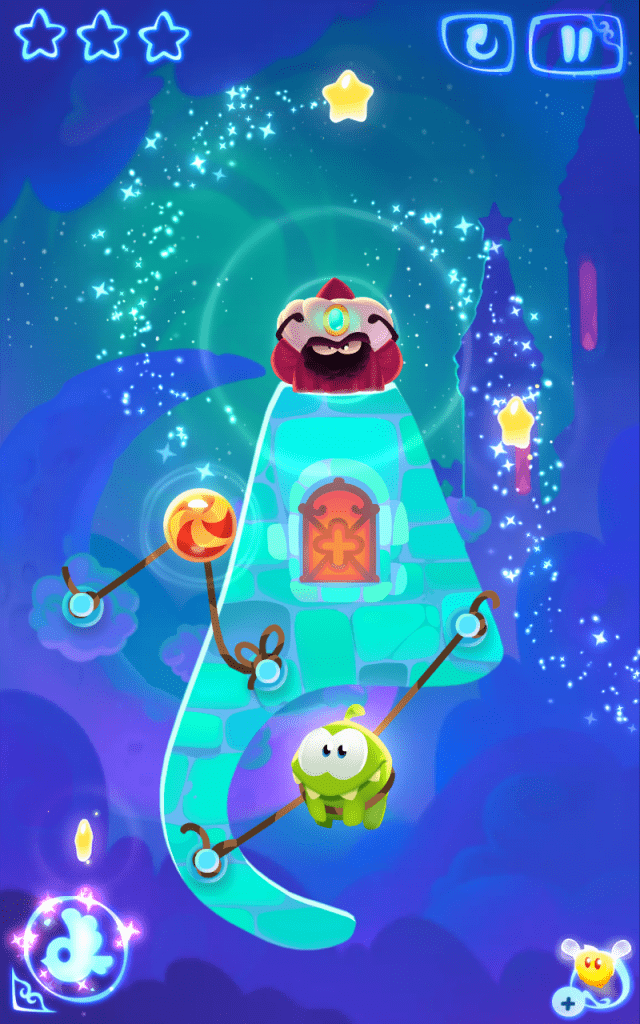 But what of the puzzles? As always, Zeptolab delivers. Clever, fun and thought-provoking, they hit the sweet spot that gives you quite a few good giggles as you finally figure out how to collect those three stars. Every five levels or so, you get to complete a boss stage that has you competing with a wizard spider that eats candy instead of flies. Overall, the new character animations are very detailed and adorable.

Chase the three stars you will. Each star fill a star meter; every X number of stars you get a gift. The gift box contains an X number of crystals. You need crystals to a) unlock new chapters; b) buy hints.

There are two ways you can unlock new chapters – by paying some 500 crystals to unlock a chapter, or X crystals to unlock the whole game. If you choose to play steering clear of IAPs, you need to score three stars to collect those gift boxes, and you need to mind that magic potion jar located to the left of the main screen. This is where you conjure more crystals. Each conjure has a cool down timer that starts from 15 minutes and then quickly turns into 3 hours, if you use it several times consecutively. At some point, you can skip the timer in exchange for watching a video ad. That option refreshes once in a while – just check on that jar more often to speed up the crystals production.

Notably, once you have enough crystals to unlock the new chapter, it unlocks automatically, and you might not even finish the previous chapter. So, I guess it is safe to say the IAP system remains true to the original formula – it’s there, but it doesn’t put an obnoxious cap on your gameplay. 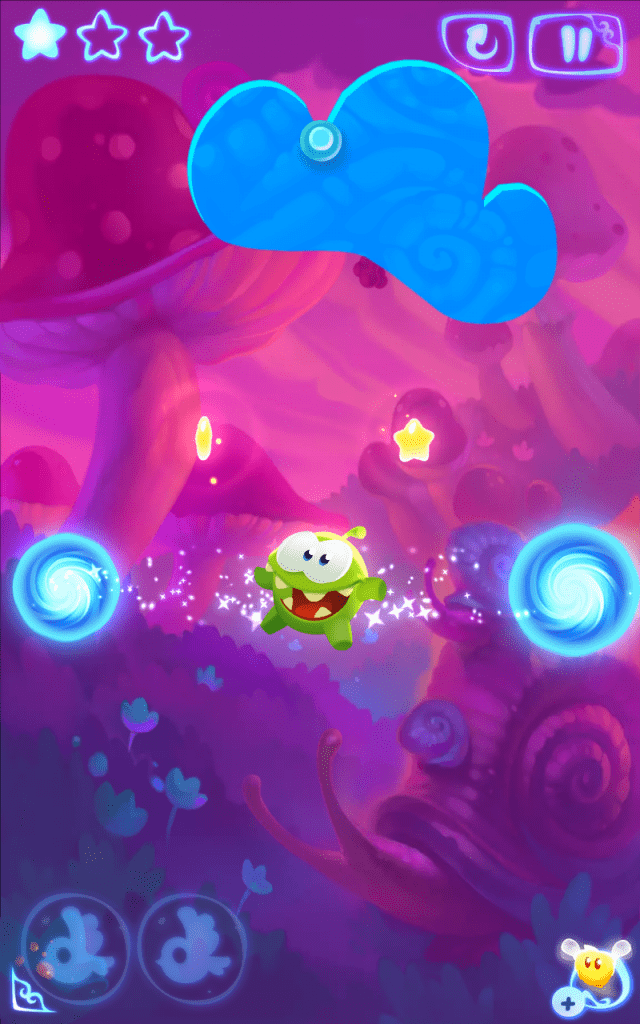 Oh, there is also the energy system with a 10 minute cool down timer. You can cover some 5+/- levels before Om Nom is full, which means he’s had enough of candy for now and needs to rest before he can eat more. You can “make him hungry” again faster by watching a video ad. Once you use that option, the next time he gets full you either need to wait, or pay in crystals. I would not recommend that, considering you need the crystals to unlock new chapters.

Another expenditure point you might consider is getting the hints for the particularly hard levels. The hints come in several packs, and are probably best purchased when it gets really hard, which in this case might be some time past mid-game. 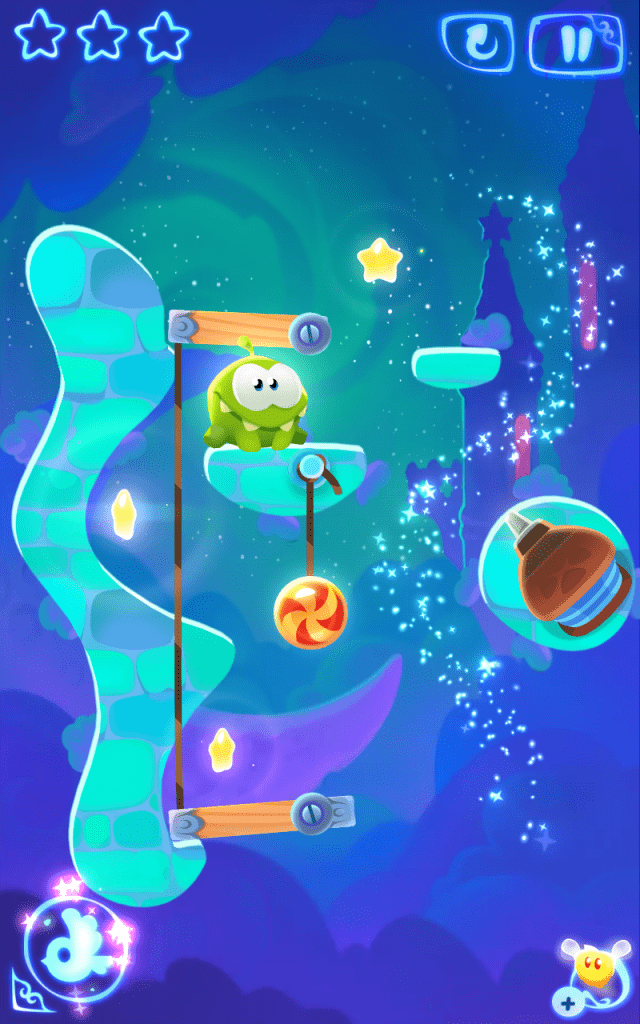 Cut the Rope Magic comes with 100 levels at launch, with more content on the way with the updates. You can replay the levels you’ve cleared, but it won’t earn you more stars. The only time it does is when you’ve cleared a level with 1 or 2 stars, and during the replay you score those 3 stars. That’s when the system adds that missing star to your star counter. Each chapter is Om Nom’s special incarnation-specific – the first one is for the birdie, the second one is for the baby Om Nom, the third – for the mouse, the fourth for the fish, and the final – for the ghost. In each new chapter, you will be able to have several avatars of Om Nom you’ve already unlocked, but it’s level-specific, and the game defines which ones you can use in each level.

Cut the Rope Magic is just as addicting as its predecessors were, meaning I won’t be quitting before I clear all the levels even if I have to brew that conjure potion every morning before I get up. You will be replaying some levels time and time again to score the three stars, but once you do you probably won’t replay because it won’t earn you more stars. That said, the game is amazing, and by Christmas you will be waiting for the new updates from Zeptolab.

Cut the Rope Magic is that – pure magic that comes just in time for Christmas. Zeptolab follows the good old rule – if it ain’t broken, don’t fix it. A fresh coat of paint, new adorable Om Nom costumes, a couple of new Om Nom animations, and clever puzzles do a great job of making Cut the Rope relevant to the thousands (perhaps millions?) of players again. The game preserves its traditional approach to the IAPs – they’re there, but fairly tolerable, and when things get tough you might as well spend a couple of dollars because the game is worth it. At the same time, if you play it for free, you can watch video ads and invest some extra time in brewing crystals to have that in-game currency handy when you need it. All things considered, it’s a game to play this weekend for everyone who has a sentimental fondness of the cute candy-loving alien.