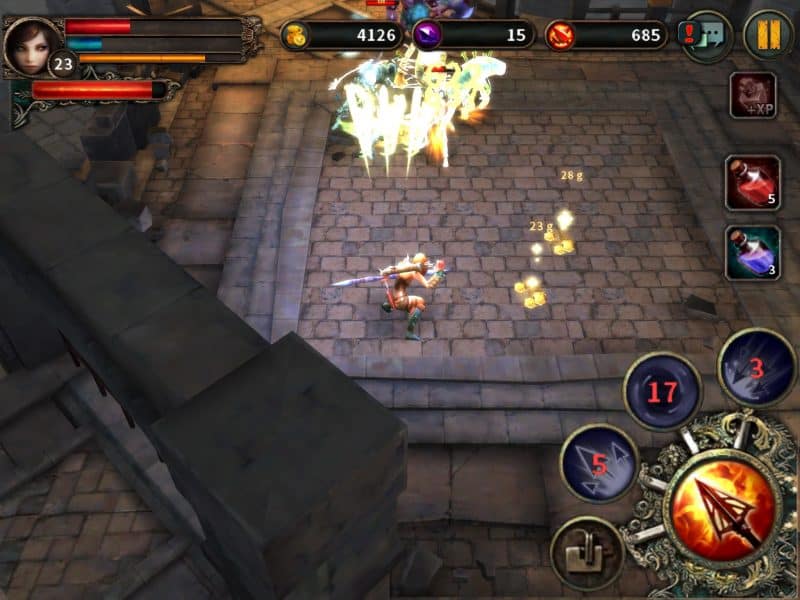 One of the games that made my list of the Top 5 Dungeon Crawlers on iOS, is Dark Avenger. I’ve been playing this game for a while, and feel it deserves a proper review. There are a lot of things that I really like about Dark Avenger, but some areas that could use improvement — and with the right changes, I think this could be arguably the best overall dungeon crawler on the mobile market. Let’s break it down a bit and get into  the specific details.

While screenshots of the game don’t look too bad, it does play rather clunky, and the character animations could use a bit of work. There are also some very noticeable glitches, such as  your character model when you’re viewing your inventory — roughly 80% of your character is just a black shadow. Upon equipping a different piece of gear in one of the shadow areas, it will show the actual item on your character, so it isn’t too inconvenient when deciding which item looks better cosmetically. 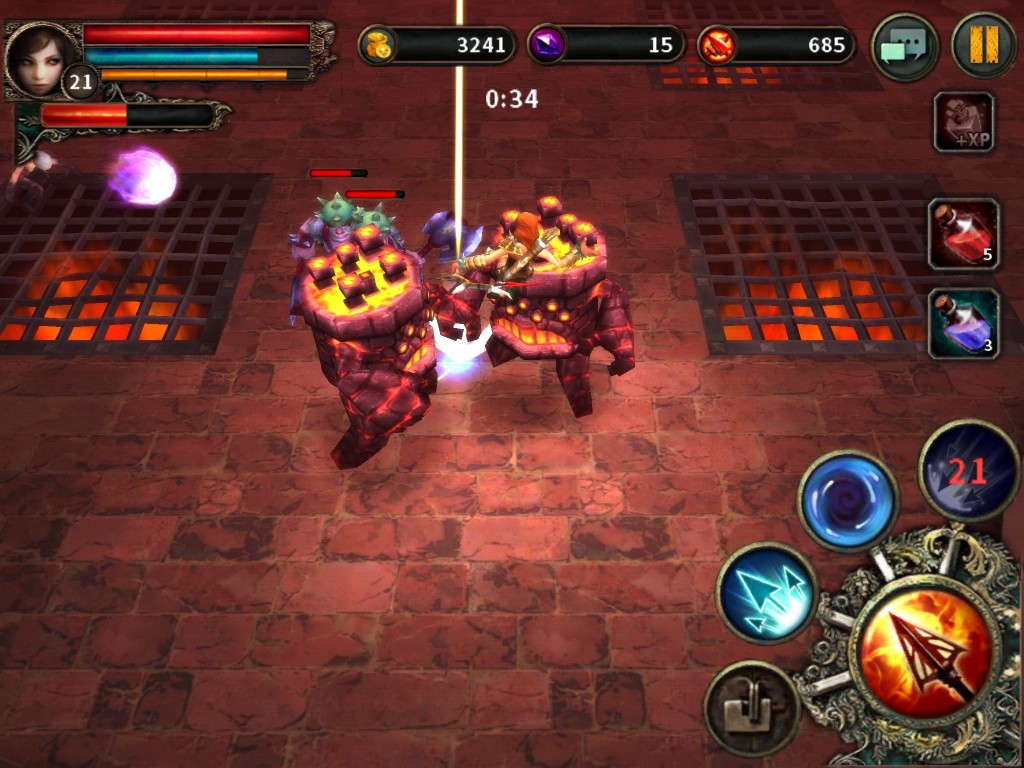 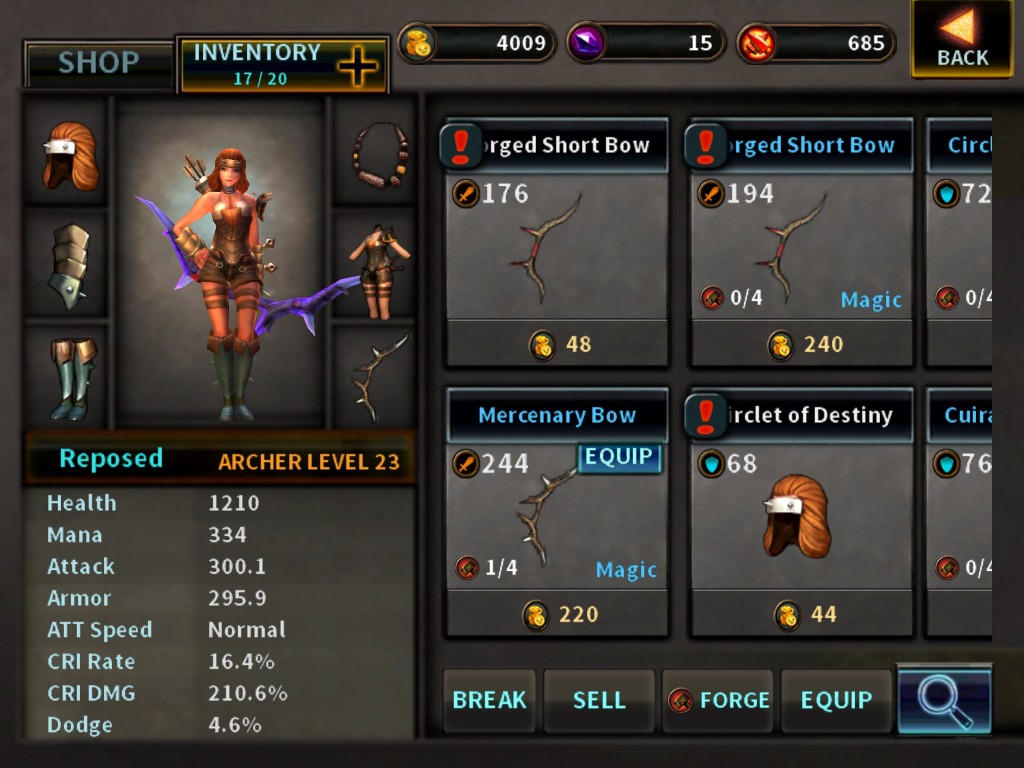 An area I’d like to highlight about the graphics, is the fantastic skill animations. Despite movements being a bit clunky, there are some really cool abilities your character can unleash, and they’re quite appealing to the eyes. There’s a pretty decent variety of item models to accompany the items you’ll acquire throughout the game, but quite a few of them are re-used for other items with similar names. As far as the interface goes, it’s pretty standard, nothing was too eye-appealing — if anything the interface graphics were below average.

Overall, Dark Avenger just has too many things that need work before it can be referred to as a visual masterpiece, but are some solid graphics and animations that keep the game from being an eye sore.

I found myself feeling very similar about the game’s graphics as I did about it’s visuals. There’s a lot of things I thought were great, such as the option to choose which abilities you want to use, and which ones you’d like to improve first. Character customization is very important in any dungeon crawler, and fortunately it’s very good in Dark Avenger. However, the lack of variance between levels can’t be ignored, and although the colors of the levels may change, the general structure of each level is pretty much the exact same as the rest of them. This is OK to a point, but it would be nice to at least have a few different types of scenery.

Fighting moves a tad bit too slow in my opinion, and although it isn’t necessarily boring, you don’t really get the intensity factor to the extent of other dungeon crawlers. All I can say is that gameplay is pretty good, there are some things that will likely be annoyances, but I can’t see anyone outright hating this game. Having a variety of different game modes is nice, and co-op boss raids, along with arena PvP, provides a decent selection of things to do other than the main campaign.

Even though Dark Avenger doesn’t particularly shine visually or in the gameplay department, it’s still a game that is very easy to pick up and start playing. The levels aren’t too short, depending on your gear and what level you’re on, they can take over five minutes. Some games rarely have me playing one mission for more than 3 minutes, and the longer ones are a nice change of pace. Having four different classes to play is what makes this game have such a high replay value, especially when there’s so much customization you can do for each one. Trying to max out all of their abilities and stats, and get nice gear on each one, provides hundreds of hours of entertainment. 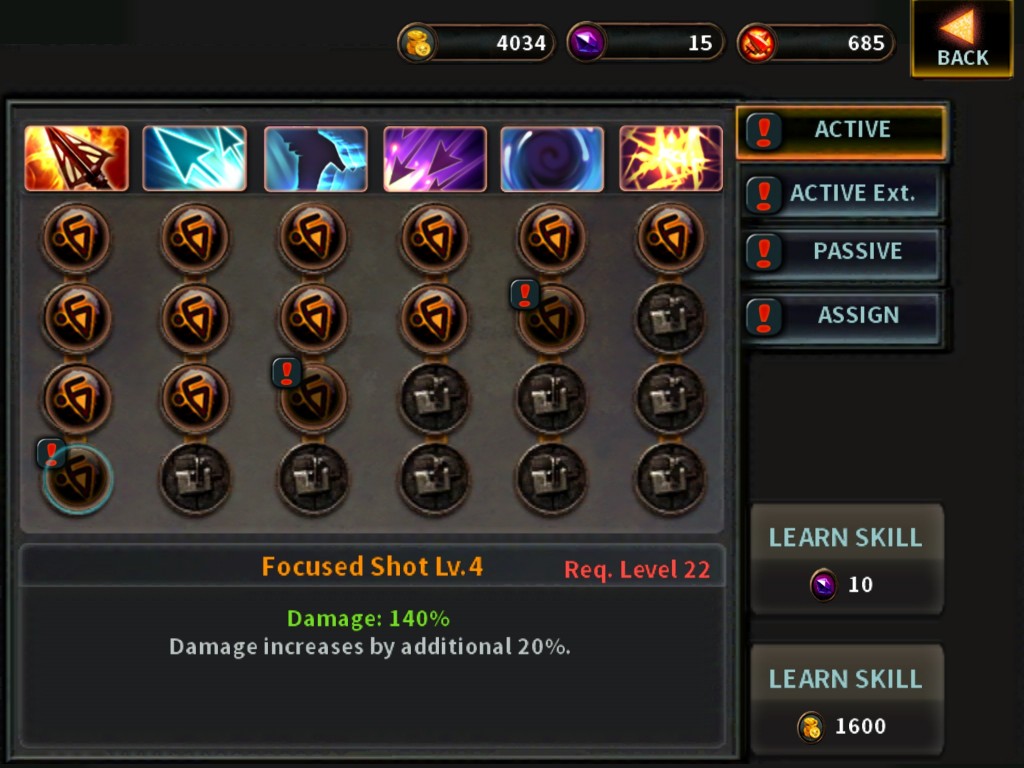 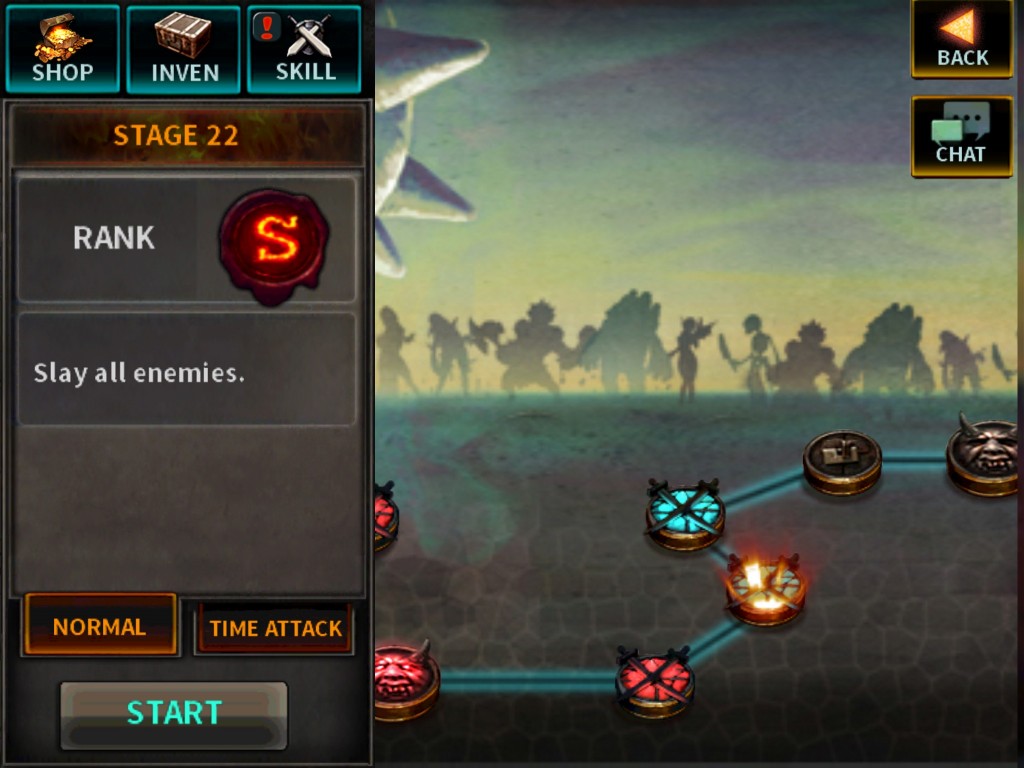 Although the levels themselves could use some improvement, there’s just something about them that makes me feel alright about going through the same scenery over and over. It’s not like the levels are 100% identical (well, in some cases they are, but with different enemies), and I guess that there is just enough variance to make it acceptable for hours of repeated play-through’s. The addition of both co-op raids and PvP matches provide players with even more activities than I’ve already listed, and just another reason to keep playing the game.

Dark Avenger may not be the best game mechanically and functionally, but it is surprisingly addicting and a perfect choice to keep you occupied for quite some time.

With so many different things to do in the game, that sets a great foundation to build off of with updates. Dark Avenger has been around for a while now, and there have been some good changes made already, but it seeming to become less and less of a priority for the developers. I think the next best move would be to update the interface a bit, and fix some of the bugs and glitches that occur both in-game and at the menus. There is enough content at this point to keep players interested, and the game itself is fun enough to ensure that they keep coming back to unlock more content. 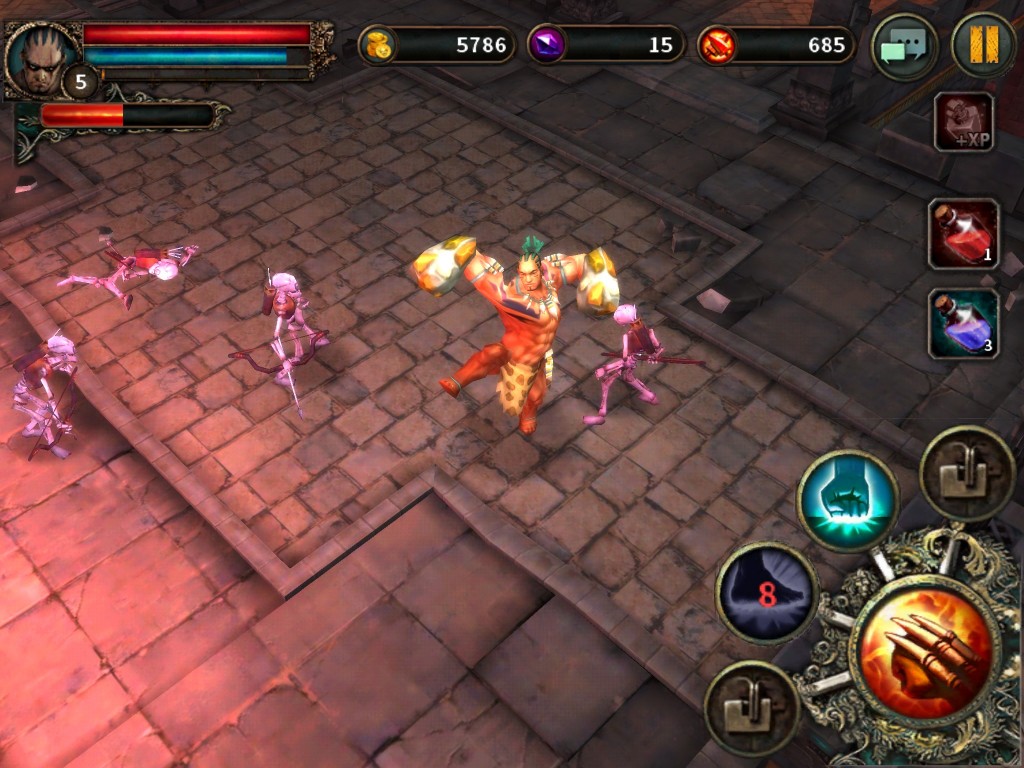 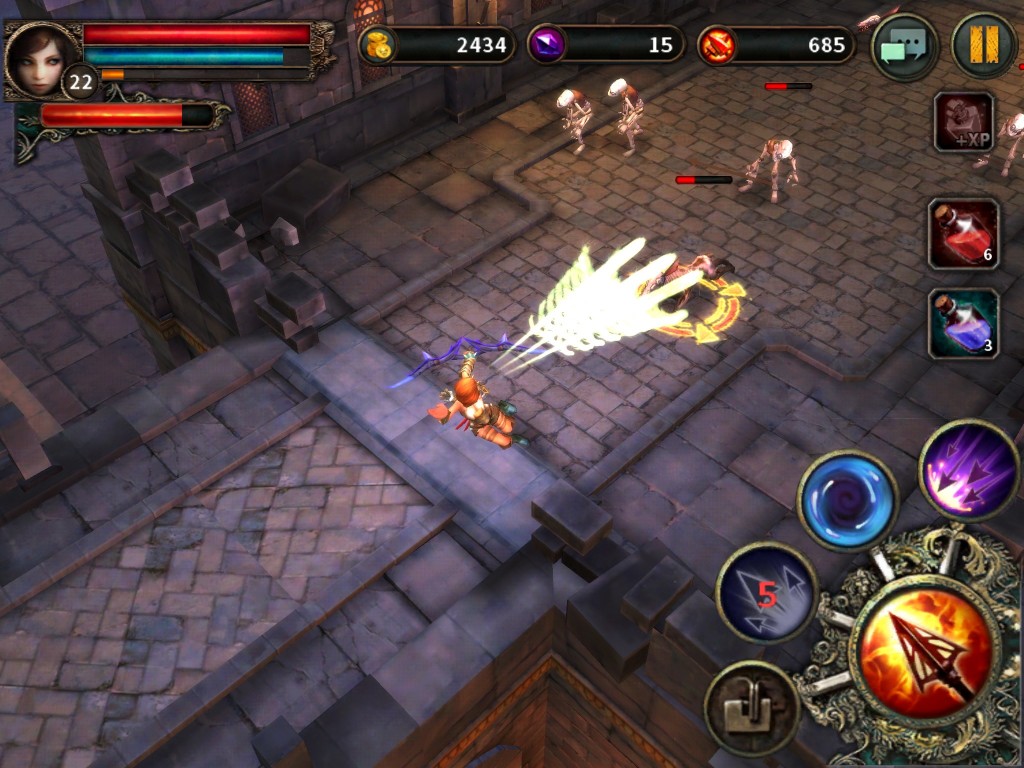 The game just needs a bit of fine tuning so it can compete with newer titles that ultimately have less to offer, but are a bit more fancy than Dark Avenger.

I definitely enjoyed playing Dark Avenger, and I’m quite positive I’ll continue to play it for a while. This game is a prime example of how a game that doesn’t have jaw dropping graphics and gameplay mechanics that are tuned to perfection, can still be something that players can rely on to be entertaining and enjoyable to play.