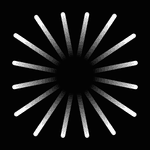 When I reached what seems to be one third of the game, paused and started compiling the download links for this review, guess what – I caught myself trying to click my mouse as silently and slowly as possible. After about five minutes I realized making noises, coughing and hitting my keyboard as loud as I could would not get me killed. First, I sighed with relief, but then it dawned on me – this is how immersive this game is. Dark Echo is a fabulous horror game for any mobile gamer, even if you are like me, and don’t specifically chase the horror genre. Likewise, if you are an avid fan of the creepy games, Dark Echo is a must have.

Think about Silent Hill the first movie. Now, think about that scene when the lady tried to sneak past the nurses with knives – in total darkness, nearly skin to skin with the creeps she could barely see. Take a look at the scene to refresh the memories:

Dark Echo puts you in a complete darkness, and unlike the movie Silent Hill, you will never have the luxury of seeing the entities, substances and things that inhabit its dark world. You are a human, that one thing you know at least. You are trapped somewhere in what feels like a dungeon, a set of underground corridors with doors and inter-level connections – some empty and cold and feel like they’re stone, some feel like dry ground or shell, some are flooded.

There is a way out, but it is 80 levels away. Don’t know how about you, but I need some glucose when I play horror games, probably to help me cope with adrenaline. So, get some candies or grapes, put on your headphones, turn off the lights and sit somewhere where an occasional whiff of wind can move a curtain behind your back. Purrrfect. 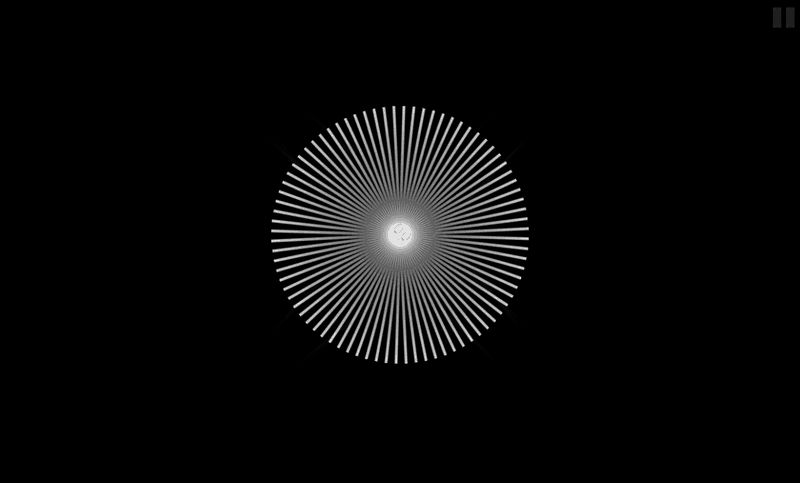 You are not devoid of senses – on the contrary, you can see and hear. It is the environment that offers no light source. Instead, you are equipped with a sensor that translates the resonating sounds of your footsteps and foot stumps into a visual map of your surroundings. Each level begins like this: 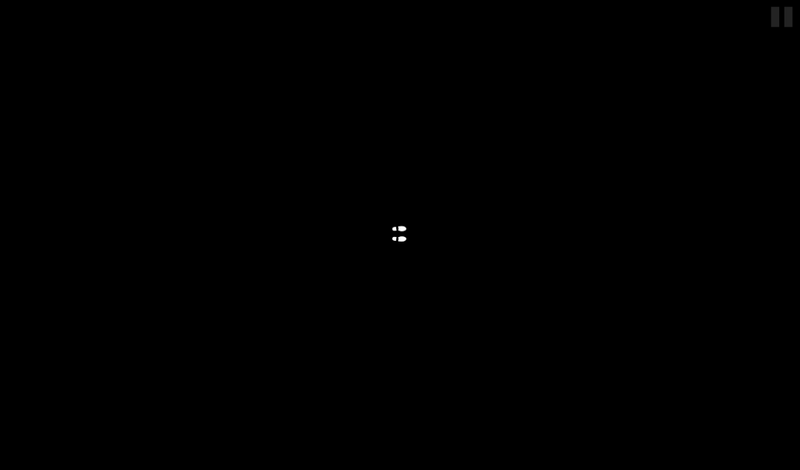 Two white footprints on the black background. Tap, hold and release and one of your feet will make a loud stump, sending waves of sound resonating against the walls around you. That way, you will see the tunnels and rooms in your immediate vicinity. You will not see their color, interior or their nature, like stone, water, or ground. Instead, you will see the rays of light hitting off the walls. Hence, you get two typesof information.

First is the shape of the rooms or tunnels ahead, their directions, and your options – one way only, a junction, a labyrinth. Two is the presence or absence of the entities inhabiting the area, their nature and the presence of the doors. Color of the rays will let you know who or what is near you.

Red is, obviously, the enemy – a universal color of blood. They come in all sizes and shapes, big and small, making awfully creepy noises. Here is when Dark Echo plays on a simple human weakness – fear and imagination paired together.

You see, when you can’t see the monster, but only feel the threat, or worse yet, a presence of the monster, your imagination paints the dire details. The monster itself could be worse, or on the contrary, it could be nothing more than a tree shadow waving in the wind outside your window. Dark Echo won’t let you see them, but it will let you know they are there; they can and will kill you in the most of painful ways if you don’t outsmart them. Dark Echo will let you know they detected you, they run towards or after you, and breathe down your neck. Exhilarating, frantic, heart-thumping! 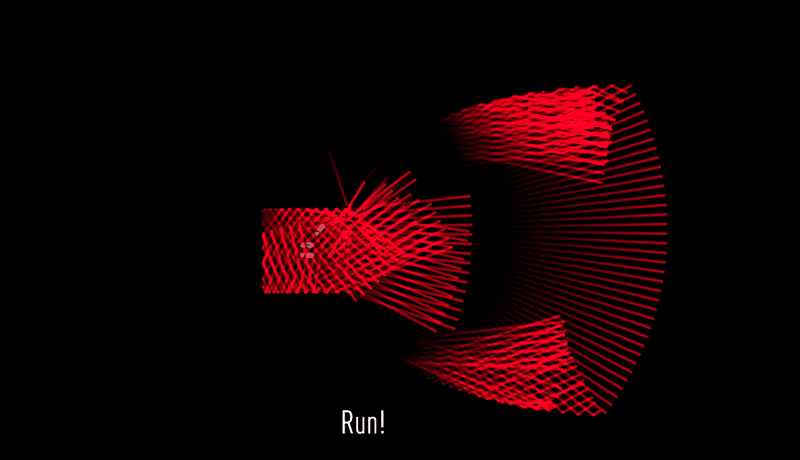 Yellow color stands for the doors that are introduced after the initial introductory levels. They open with a screeching noise that may alert the things.

The white pulsating lights – I don’t know what they are, but they certainly help you get through the tough levels when you can’t afford to make a sound and have to literally move blind.

The white moving light is someone. It may be a person, an animal, or something that is not hostile, but also trapped and looking for a way out. An element of intrigue, a ray of hope you are not alone in this. You don’t dare to speak a word, though.

The exit doors are bright white and light up only when you reach them. 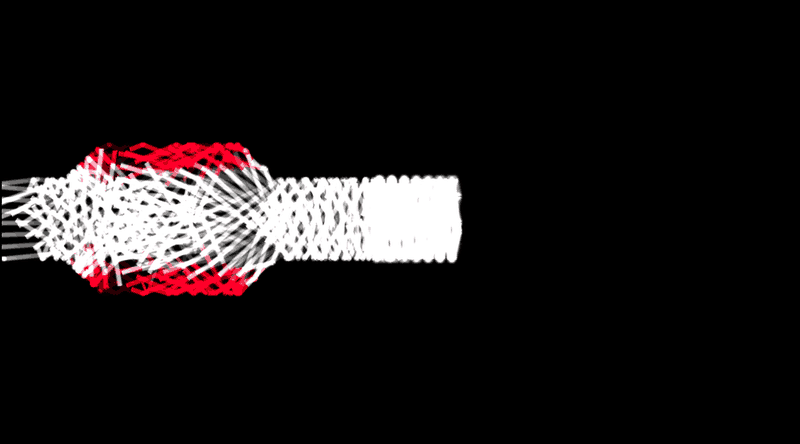 Dark Echo is brilliant in many ways, and introducing harder challenges is one of its brilliant features. The initial levels let you stump your feet and illuminate the maps, spotting the ‘things’ where they are. Then, you can still stump, but have to open the doors, and some doors are outright wrong, where the ‘thing’ is waiting for you, whereas the other doors are safe. These are the labyrinth-like levels.

At first, the creeps are unaware you are there, but once you start moving and making noises, they may, and in most cases will, hear you. Next is you either run, or stop. Just like you, they are blinded by the pitch darkness.

Sometimes, you would be able to outrun the creeps, but some point after the first 15 levels, the game introduces a new mechanic you will be using quite a lot from now on – sneaking past them, making small steps. That is when the creepiest of experience is introduced. 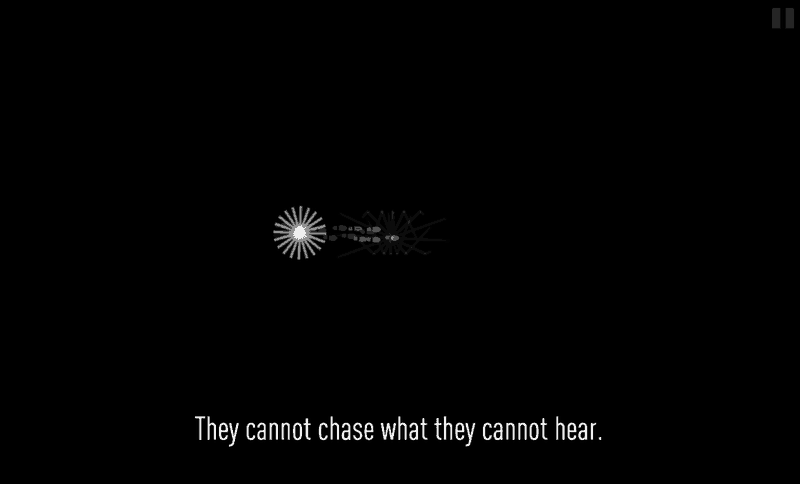 Get ready to use death as your teacher – every time you die, you learn a valuable lesson about the level, or the mechanics, or the tactics. Not a very pleasant experience, anyway, but thankfully, Dark Echo doesn’t count your lives or sends you back to re-start the whole thing. The levels you’ve unlocked are yours to enjoy, and you can die to your heart’s content.

That said, the slowly-treading pace adds volumes of fear, tension, impatience. Some particularly impatient folks say ‘c’mon, move it, you can run now!’ I like to play it wise, and crawl where I can, instead of risking the progress I’ve made in a level.

It’s the kind of tactical wizardry this game demands from a player that is another brilliant feature of Dark Echo.

Tap and hold somewhere near your feet to release and make a loud stump – this will give you as much perspective as possible, depending on your current position. Tap and hold further away from your feet to move continuously, making quite a lot of noise. Tap once, wait, tap again, wait – this is how you move in stealth mode, to stay below the beasts’ radars. Overall, I have never encountered any hiccup in the control system, and whenever I died it was through my fault alone. 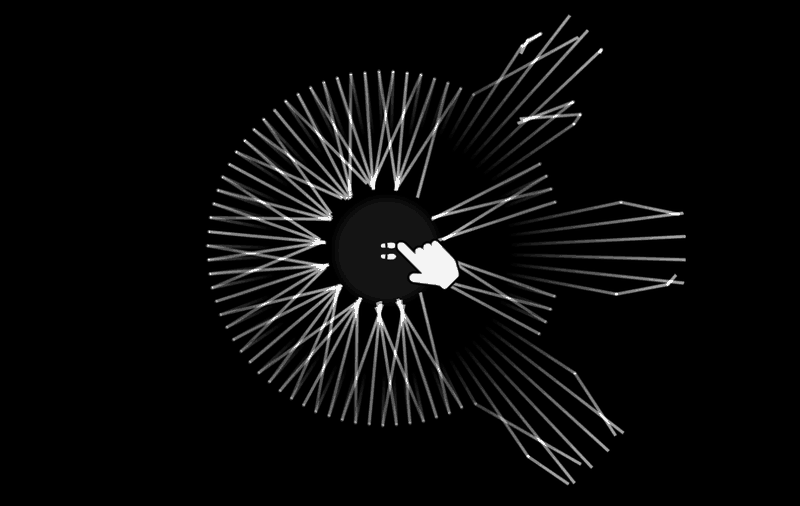 As minimalist as it is, the design in Dark Echo is ingenious, as are all things simple and brilliant. This visual deprivation successfully creates the atmosphere of tension, anticipation and fear.

There is no music, which I do not particularly appreciate, but the existing sounds of your footsteps, the obnoxious sounds the creeps make and the ultimate desperate “Aaaah!” of you dying are enough to complement the visualization. To think of it, the lack of a soundtrack is yet another deprivation that could have been designed as another means to make you feel miserable.

Overall, the artwork is superb. 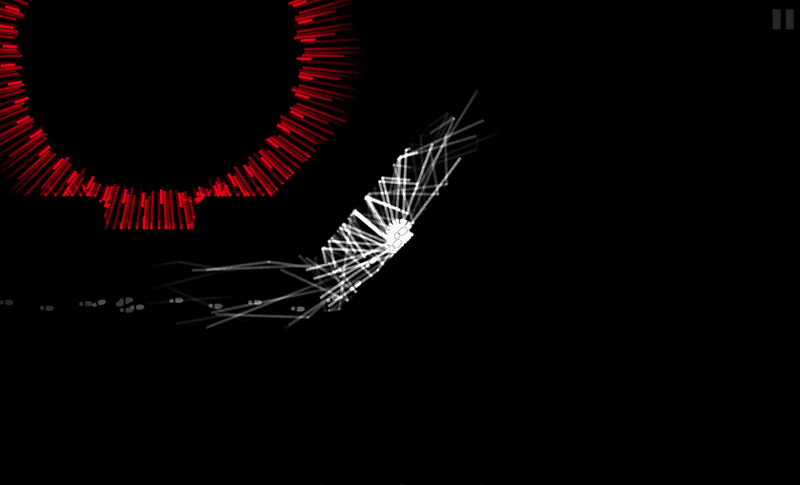 Dark Echo is a premium title without the IAP nags. Buy it, or get it at the iTunes free app of the week, and enjoy all you want – no life, no energy restrictions. Just you, the dark, and the fear.

You are unlikely to replay the levels you already passed before you unlock and beat them all – that’s the nature of an adventure game, and Dark Echo is an adventure in a way. I anticipate this might become a resident app on your devices, just like Monument Valley, or Odd Bot Out. You won’t be playing it every day, but you will return to it time and time again at your own intervals. After all, this game is innovative and talented enough to become the new classic in minimalist games that are incredibly rich in their contents and unique in their gameplay.

It also offers a clever pacing, when relatively quiet stealth action is followed by a frantic run for your life, thus providing a perfect varied gameplay.

The game features two modes – the black and the white, and recently an immersive mode was added for those devices that don’t have the hardware buttons. However, immersive mode is just that – it blackens the Android Home, Back and Screens buttons.

As far as unique goes, yes, you might relate it to Papa Sangre in a way, but the latter is only available on iOS, and there has been no news of an Android port since 2013. 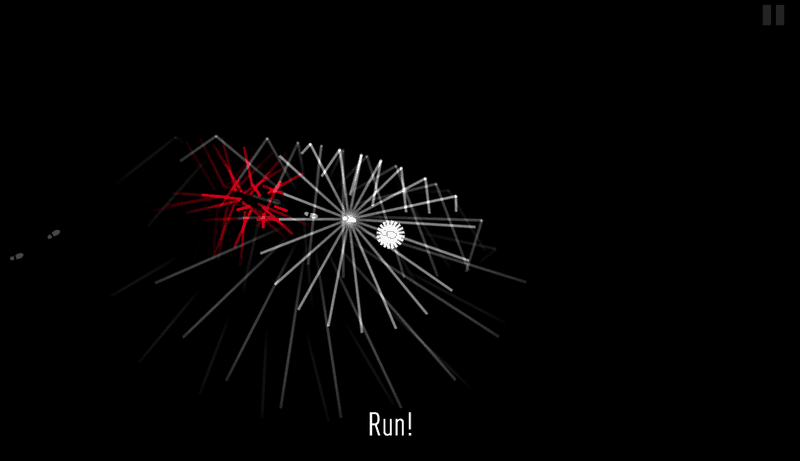 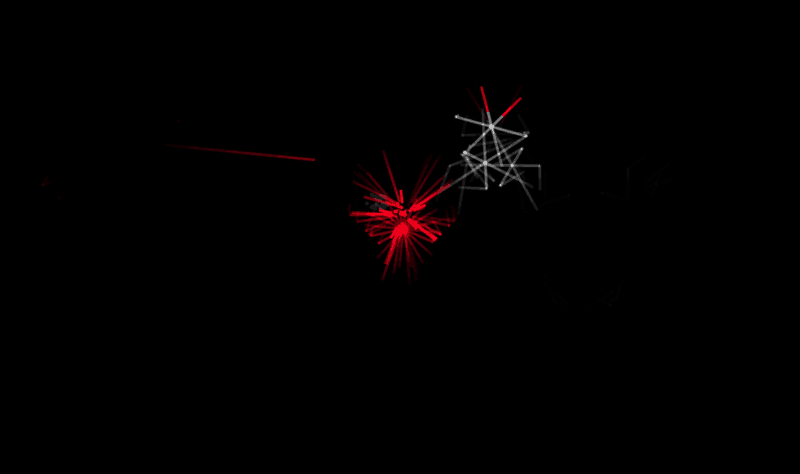 Dark Echo is a fantastic horror game. Minimalist in design and sound score, it is meant to make you feel deprived, hunted and cornered. It offers a great deal of levels and hours of engrossing gameplay, keeping you glued until you resolve that mystery – is there a way out to safety? It does require patience and subtlety in its more difficult levels, and is best enjoyed with headphones and in a peaceful setting. It is not a con per se, but I don’t see myself playing it on the go – it requires an appropriate set of mind and environments free from distractions to grasp you fully, but when you get your first scare jump, you are sure to get addicted.

Its minimum narration, smooth controls and a firm grasp of your attention, as well as the dark, haunted void will keep you coming back for more. Without a doubt, Dark Echo will be on my list of the best mobile games of 2015.