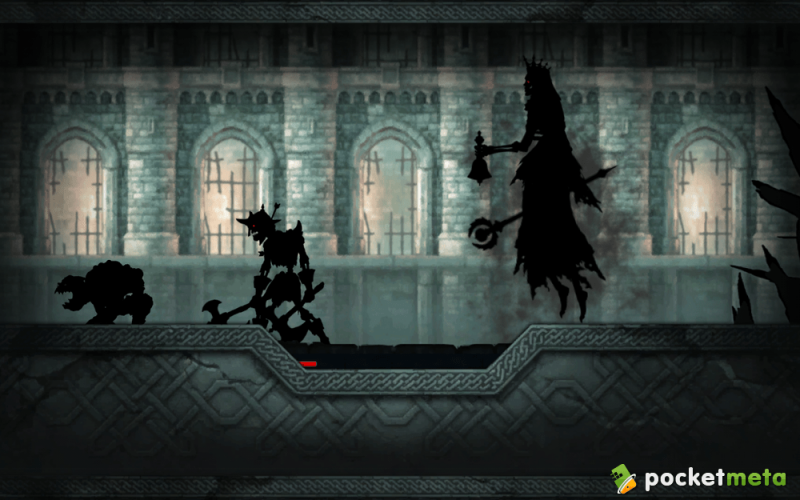 Dark Sword is a new hack and slash RPG from Nanoo Company based in Seoul, South Korea. We took it for a spin, and it was fun while it lasted, until it wasn’t. We still think some of you might find it a worthwhile time investment, though, so here is the deal.

Dark Sword looks nice, with the minimalist silhouette style where your hero and the monsters are black and the background is gloomy and all that apocalyptic jazz. That’s among those things I would say Dark Sword gets done right. It is gloomy and ambient enough, and is easy on the eyes. At the same time, as I just tried to play at night, with a screen filter on, it might just get a little too dark, with the heroes blending in with the background, so a little screen filter tweaking specifically to get this game look right was required. 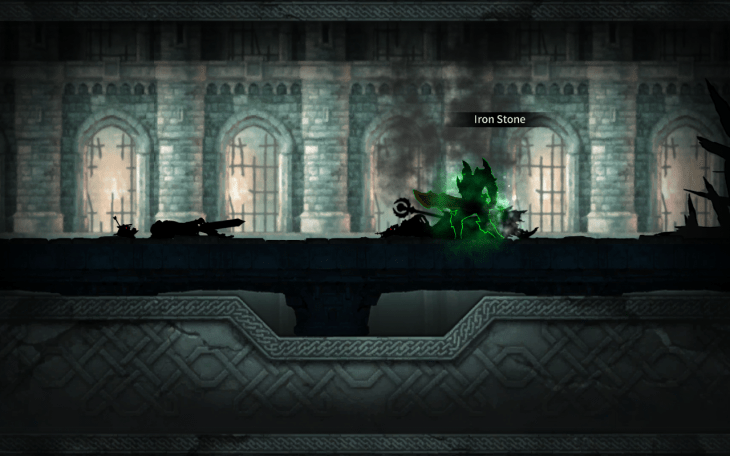 The gameplay is dead simple, so don’t look for the depths to explore here. You play as a knight with a big sword and fancy armor. Your enemies? All sorts of black silhouettes that look like the dead, zombies, iron-clad thingies with horns and spikes and teeth. It’s difficult to tell anyway.

The main enemy is a Dark Dragon that closed the gate to the sun, and made everything look horribly pale and sad. I always knew the alien reptilians were the primordial archetype of the devil – how else can you explain they’re in so many folklore tales around the world? They have long made the transition to possess human bodies and elect themselves presidents and kings, while we think they don’t exist and play mobile games slaying tiny dragons.

On a serious note, there is not much variety in the enemies, and a few levels into the game they all start looking the same. I disliked how the enemies do not have a health bar, so you never know how much till you kill them. 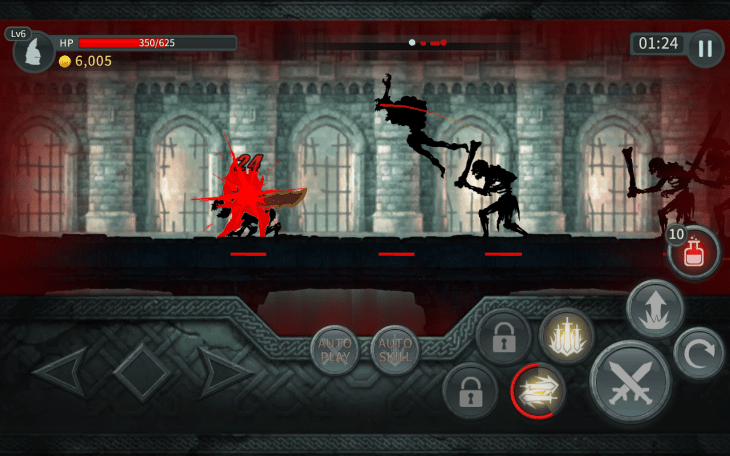 Each level is time-based, and if you fail to cover it within the given time frame you either lose, or buy your way to get to the finish line.

The combat is smooth, yet too simplistic to have that novelty that would keep you glued to it for a long time. It’s a 2D side scroller, so you have the buttons to move left and right. You can also jump and dodge. The other buttons you might have depend on your weapon. Some swords come with 5 buttons, some with 3. So, be sure to check out your sword’s special moves before you sell it or unequip for a different one.

With the special abilities of your sword, you have a couple of moves that add the visual variety to the gameplay, and clear some of the tough enemies from the screen. That said, the mechanic is quite simplistic, so I would recommend this game to those who need a casual time killer rather than a deep RPG. 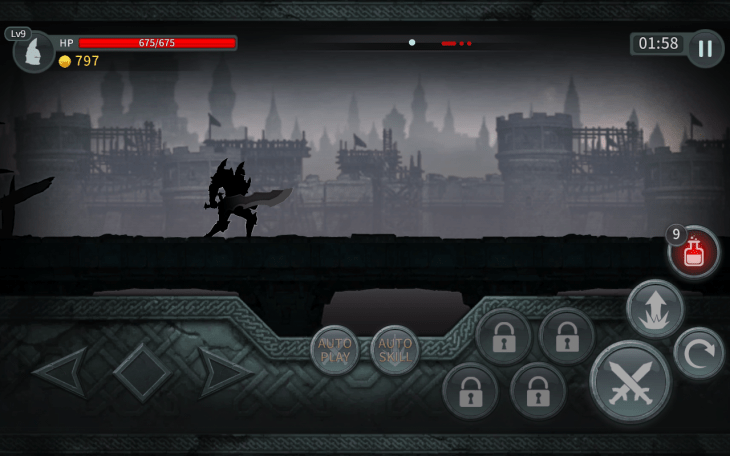 The RPG part is limited to the armory. At the end of each stage you might earn some loot – ammo, rings, magic stones, swords, helmets, and the like. In your armory, you can view them, and equip, upgrade or sell them. You need the stones to upgrade an ammo you’ve maxed out.

I did not enjoy the armory’s UI. Comparing items is a pain, and you can not see immediately how a new item would affect your hero’s stats if you choose to equip it.
Besides the main story mode, there is an Infinity Tower, a mode where you can play until you die. Clearing each floor of the Infinity Tower grants you three souls, which is the energy system of the game.

There is also a Daily Raid – don’t know what it is because whenever I want to try it it says wait for the next daily raid, which is 07:00 – 09:00. What if I am never available at this time?

There is a Hardcore Mode that requires a character level 20 at least. 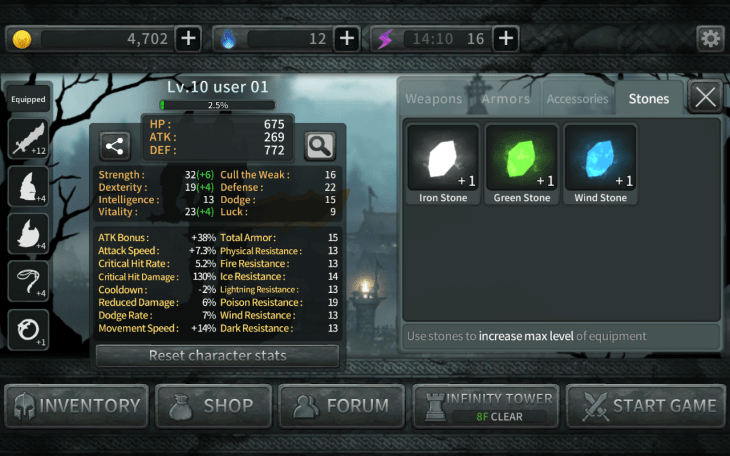 At this point, let us take a look at the IAP system. You have souls, which is your main in-game currency needed to buy other things. Once you run out of them, they do not re-generate over time, as you would expect. You either pay in money to get them, or you play the Infinity Tower to grind for them. $3 will get you 90 souls. Then there is stamina that self-renews over time.

You need Gold to upgrade your weapons and ammo. When you clear each stage you earn some gold. You can also watch video ads to earn some more gold. The way the game is slated towards IAPs, you feel you must watch the ads after each stage. Otherwise, you’re stuck with underdeveloped gear that no longer gets you anywhere.

There is also a vital element that”s health potions you can take during battle to keep your hero alive. They do not drop in battle – you have to watch ads to get them. Or, pay in Souls to buy health potions. 10 souls will get you 10 health potions.

Other potions, like time and exp, do not seem lucrative enough to invest anyway. While the auto-play and auto-skill options inside the stages make it a laid-back fun for the lazy.

If you choose to grind, just enable the auto-play and sit back. Don’t forget to watch the ads after each replay – that’s how you get more gold and potions. That is, until the videos are no longer available, which happens too soon. The ratio of stage combat time to ad time is 1:1, in case you were wondering. 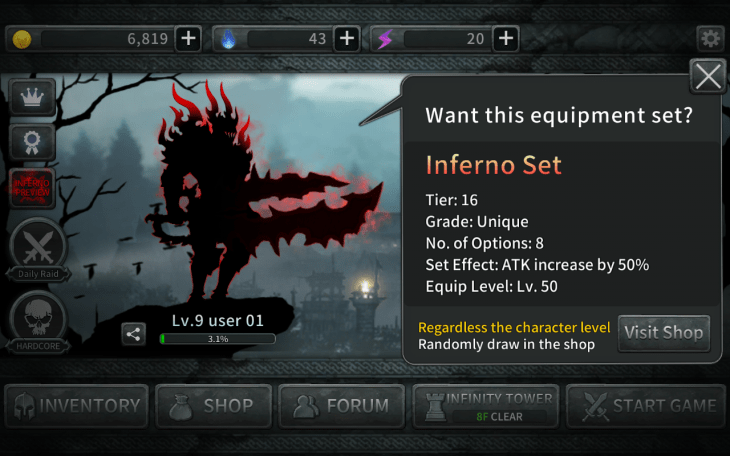 Overall, Dark Sword was fun while the stylish silhouette graphics felt new. When you realize the gameplay is rather monotonous and superficial, the need to grind for gold and souls watching ads or buying items diminishes drastically.

In its entirety, Dark Sword is a nice, if short-lived hack and slash for the newcomers to the genre, who do not seek overly complicated systems that require too much thought. It’s a casual game with a definitive focus on paywalls, ads and IAPs you can easily bypass by treating it as a time killer for short sessions. It needs web access, but you can play it offline, too.