Daytona Rush is a racer, and it’s a tough call to release a racer these days, with this over-saturated genre. Invictus Games chose to walk the safe path – take the classic core of a racer, wrap it in a beautiful cover and throw in a few perks that might make it stand out from the crowd. Since beauty is in the eyes of beholder, this game is just like any other game – you either like it, or not. I did, for a while. 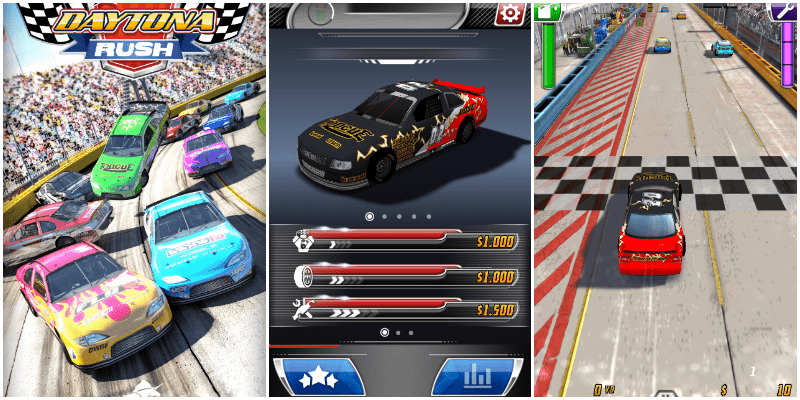 You drive along an oval track, and the number of laps you make depends on your reflexes alone. Your car drives by itself – you don’t have any controls of the breaks or speed. What you can control is left and right turns – tap on the left part of the screen, and the car switches one lane to the left, and vice versa.

The track has three lanes with a crazy amount of cars driving in the same direction. Truth be told, the traffic in Daytona Rush is the most congested I have ever seen in a racing game.

Controls – You have to tap left and right every split second to avoid collisions, especially as you progress and the difficulty and speed get tough. As a result, Daytona Rush is more of a twitch game that tests your reflexes rather than a racing competition.

As I said, the race is infinite and the limit is your imagination. I have not reached a particularly spectacular number of laps, but a small number of advanced users suggest there is a lag in performance when the number of laps gets high. I haven’t experienced it myself, though.

There is the fourth lane – the extreme on the left. This is where you need to turn when you run of of fuel, so you get to drive the 4th lane as a peculiar pit stop. You don’t stop, and keep on driving at the same speed. The only difference is there are no other cars but yours when you get a re-fuel. 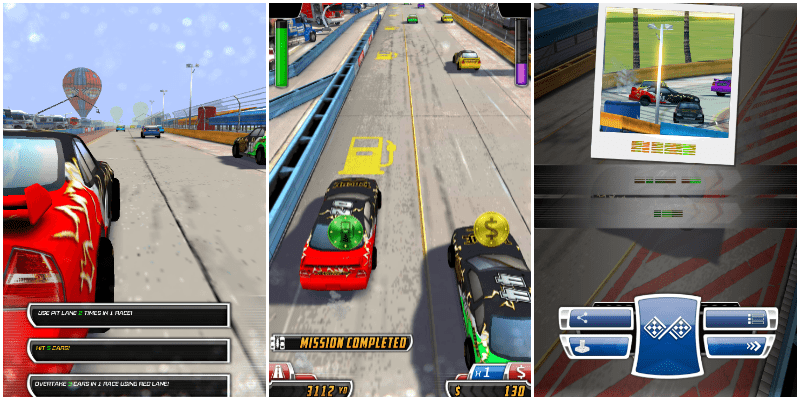 The challenge is to get there on time and to get off it on time – before it turns red again. If you drive a split second longer on the 4th red lane – you get disqualified.

The game has missions, which add a purpose to every race. They are different each time – outrun a X amount of cars, re-fuel Y times, collect Z amount of money, etc. Overall, there are 100 missions for the persistent kind.

There are in-game money you earn for each race. These unlock new cars and let you upgrade whatever car you are driving. There are five classes of cars in Daytona Rush, and they add a good deal of variety and purpose to the racing, if you want to unlock them. The first is available by default while the second one gets unlocked when you make it to the Level 5, and so on, with the last one getting unlocked at Level 20. The other cars are more modern, some look like F1 vehicles, trucks and more.

The first car is a pretty stock vehicle with mediocre speed and maneuverability, but as soon as you get your first thousand in-game dollars you can start beefing up its engine, running gear and body. If you are torn between upgrading a vehicle’s body and running gear, go for the gear and engine – it improves the performance of your car. 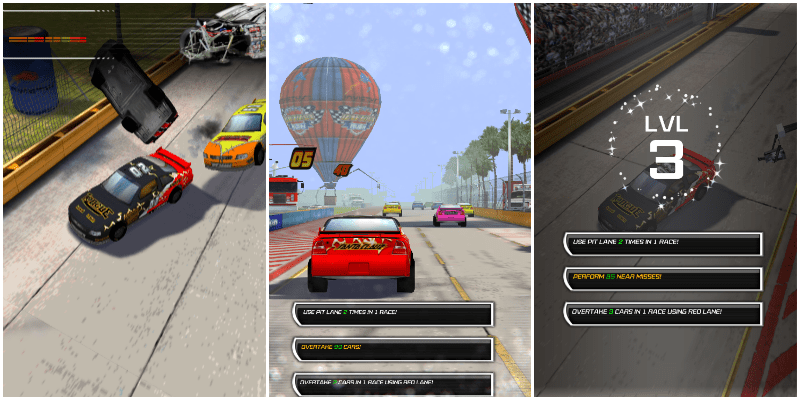 Among other nifty features of Daytona Rush are visuals and an action photo you get at the end of each race. You can share it with your friends via social network or email.

The design is another attractive part of Daytona Rush. The sharp colors à-la vanilla lollipop look smart and attractive, making the game a delight to look at. The collisions and angle transitions look great, but there is not much diversity in the crash scenes.

The same praise can’t be said about the sound score, though. It is a typical racing loop, with the revving engines and screeching tires, and some music in the background, but it may get tiresome after a while.

The in-built global leaderboard and the social interaction is what makes this game addicting for the personalities that are competitive and addictive at the same time. It is easy to see your rank on the global leaderboard, as well as share your results with your friends via social networks. 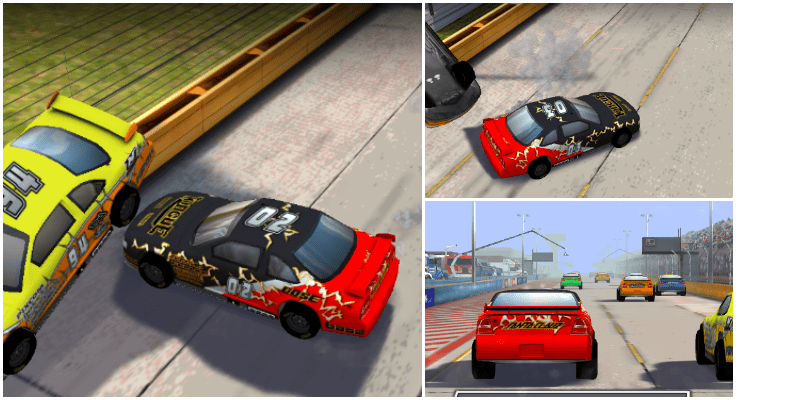 Finally, its greatest advantage is Daytona Rush is completely free – no IAPs, or pop-up ads. Hence, the game is kid-friendly and quite entertaining in this regard.

Replay Value of Daytona Rush is its Achilles Heel, although how you take it largely depends on how satiated with typical racers you are. Once you have played a few minutes, you have basically seen it all. On the other hand, the gameplay is fun to keep playing once in a while, especially on the go when you have no Internet access. It is both easy and fun and even a 5-year old can pick it up ans start playing, and soon it gets challenging enough to ignite a sparkle of interest from the competitive folks. The missions and the in-built leaderboards help keep that competitive interest alive. Also, I like to give it a 5-minute spin once in a while just because I like how it looks.

Overall, though, I would say the replay value is quite mediocre. 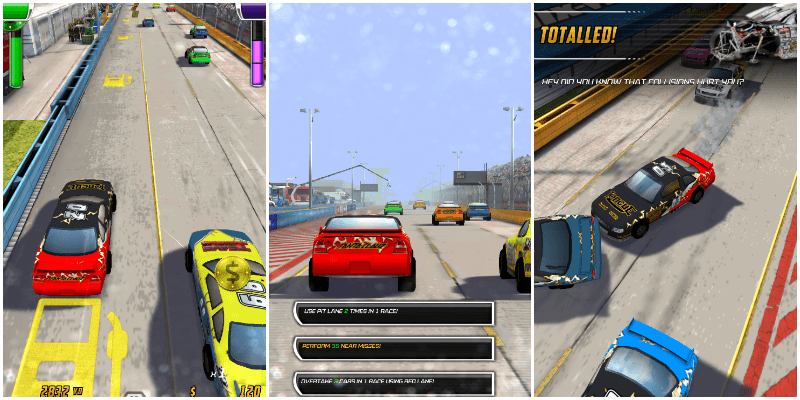 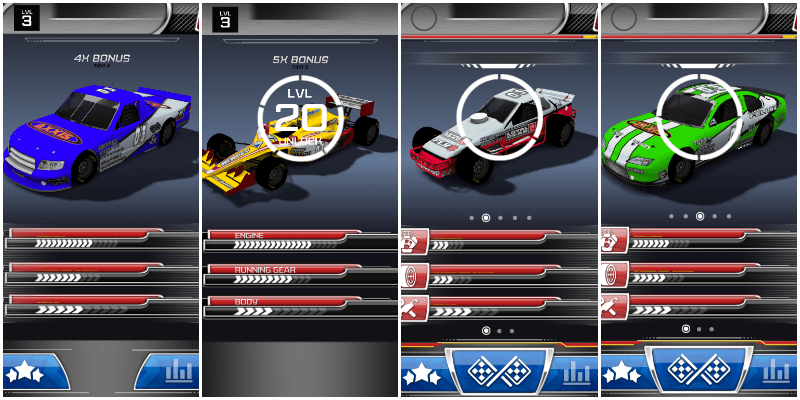 Daytona Rush is a very entertaining, good-looking, but typical car racer with a good deal of fun to be had, but ultimately, its strongest features are its looks and the absence of IAPs in a free game. This is the kind of app you’d be grateful to have when you commute, or when you visit your relatives who have kids and you can’t deny letting them use your device. Daytona Rush will keep them busy for a while and won’t cost you a cent. At the same time, if you are a kid at heart and like to see your name at the top of a leaderboard, you might stay with it for a little longer.