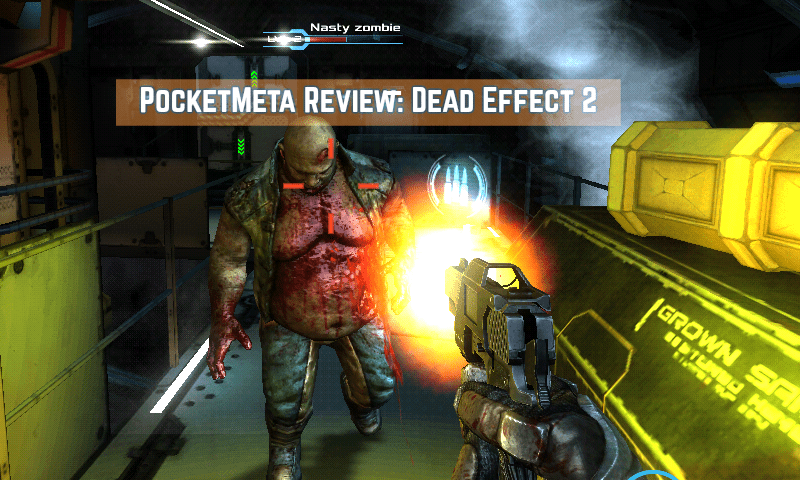 There is no doubt Dead Effect 2 is a game to download, so this review is not about whether you should try it, or not. It’s a great sequel to the first game, and all. The questions that affect the gameplay heavily include, but are not limited to – Does it require Internet connection to play? Is the grinding heavy? Do the IAPs buy me exclusive premium content, or do they buy the consumable in-game currency? Does it lag a lot? Is there a multiplayer? These and a few standard points will be discussed below.

Dead Effect 2 (the devs of the zombie shooters seriously need to come up with new names) is a worthy sequel to its predecessor, and some even say it’s way better. Beauty is in the eyes of beholder. The second game picks up where the first left off – with Gunnar waking up from an electric shock on ESS Meridian. Only now there is more havoc from the abominations, atrocities and zombie robot dogs than ever. Besides, a spec ops squad is heading your way to finish the leftovers of the experiments. Including you and the pixie cut blonde with big boobs. Well, maybe not that big, but the game is definitely geared towards a younger (around puberty) male audience appreciating the cheap talk and boobs.

Yes, the writing does not quite impress. Neither does the wording like “retard” and “fatso” or “retard minion” about one of the human team members. That’s gross. Well, I am an adult, and I think that’s gross.

Nonetheless, the story enjoys more focus in Dead Effect 2 than in most zombie shooters and you might spend quite some time “talking” with your crew members in the head quarters, exploring the back story. Or, reading the data cards you receive and collect as you play. 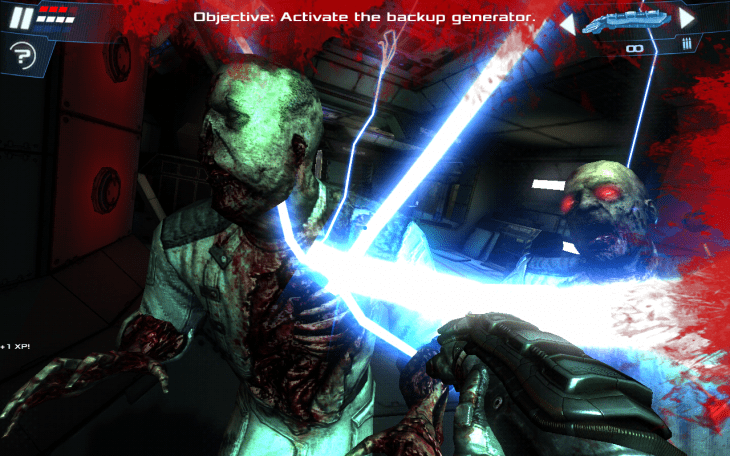 There is enough fun to be had here to look past the rough edges of the script. With five game modes (no multiplayer just yet) and a wealth of missions you can play on four difficulty settings, this game offers what the FPS zombie shooters fans are looking for – dismemberment and gore. And katana.

There are three characters you can try, and keep in mind that the melee character is the toughest to handle in combat, so it might be a good idea to leave that lady for the desert. (Is that the game’s influence on my verbiage?)

The missions are neither too short nor too lengthy – just about the right length that suggests you can complete the mission AND explore the area for loot. The latter comes in the form of the money, ammo and secret orbs. At the end of each mission, you can see your stats based on your accuracy, zombies killed, mission time, achievements, secret orbs, credits found. Based on these, you gain experience and talent points. 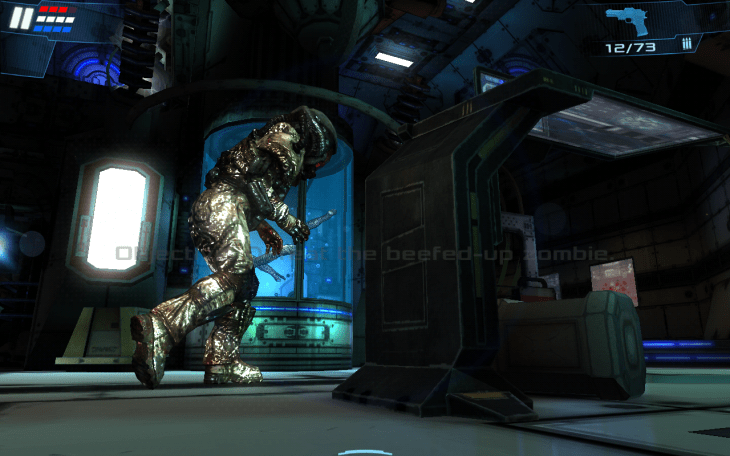 Here comes the RPG part – your character has a fairly decent skill tree. Everything is locked as you start, and as you play and gain the hard to come by points, you can unlock and upgrade a skill. Notably, there are four types of abilities – class, special, general, and weapon. Each come with about 5-7 skills. In other words, it’s going to take you a long time to beef up your hero. The hi-tech body implants, weapons, ammo, health kits, and all that RPG legendary and common goodness is there for everyone to salivate at. 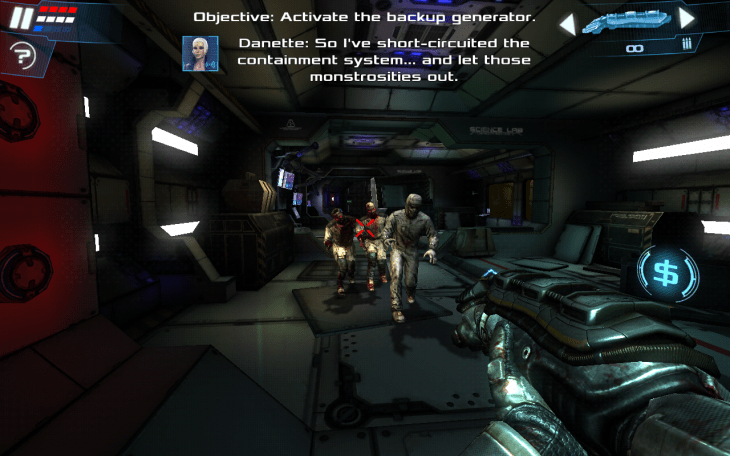 The game is hot right out the oven and comes with controller support and extensive in-game mapping options. You can as well adjust the touch controls to your liking. You can change the layout of the buttons, toggle the auto-fire on or off, calibrate the sensitivity, and the like. I have been playing with the touch controls only, and I’d say they are fairly fluid and responsive. Switching from the regular view to the sniper view does have a noticeable lag, though. Other than that, the game creates just the right tension and immersion, and the fluid controls contribute to the effect. 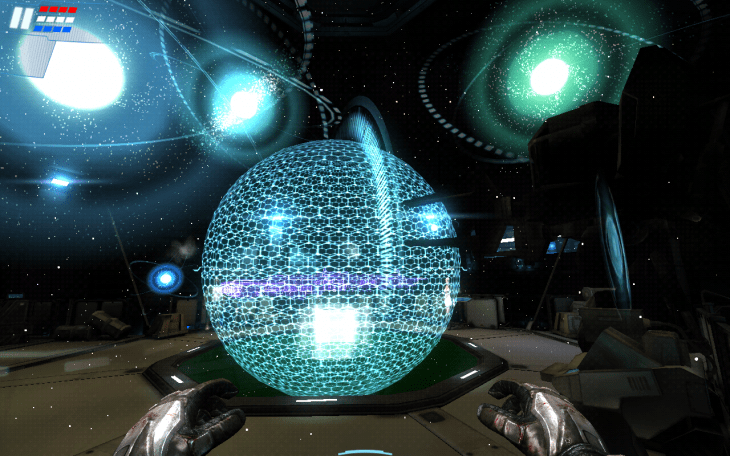 The visuals is another aspect that contributes to the engrossing atmosphere. Here, too, you can adjust the visual settings manually, and the options menu is quite detailed to the point you can turn off the shadow and bloom if your device is struggling. A higher-end device will be able to display the most of the game’s visual glam, and the fact it’s compatible with NVIDIA Shield tablets speaks for itself.

Dead Effect 2 is visually impressive and gory. It uses slightly less reflection effects, so the zombies don’t quite glitter as in Unkilled, but they turn to the golden pixel dust as you kill them. The zombies come in a great variety, and even have class names – “Nasty Zombie.” I told you, the script. Names aside, they look “good.” If you play at night, with your headphones on, you might have a few jump scares when the piece of meat starts munching on your feet. 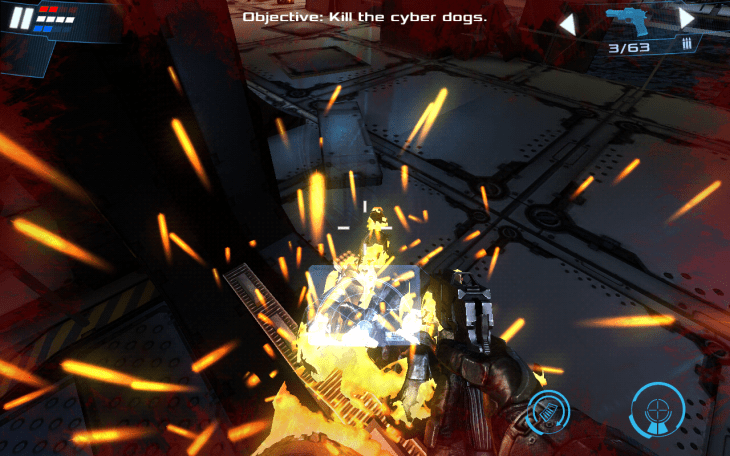 No, you can’t play this game in the offline mode. Yes, you need to log in with your Facebook or Google + account, or else you will be limited to the first introductory mission only. So, forget the privacy issues and log in if you want to play this game. And no, it does not have the multiplayer. At least not yet, but provided the users are screaming for it, there might eventually be an update with the craved feature. Especially since many folks are pretty pissed about the Wi-Fi requirement with no multiplayer bonus.

Be prepared for some heavy grinding because the story missions require the weapons (and your skills) of appropriate level. You won’t have enough money by playing the story missions only, so side missions will be an invitation to grind. You can replay the missions on higher difficulty, but again, you need some good weapons.

The rumor goes that when the game just launched, the prices in the guns shop were lower than they are now, and the early birds aren’t happy with the update. Yes, the weapons are ridiculously expensive. Provided they will become under-leveled in a few missions, the IAPs suddenly sound less inviting.

I don’t mind IAPs that unlock premium features or content, but when IAPs are geared towards the in-game currency you spend right away, and need more in a few days, I pass.

You will enjoy Dead Effect 2. You will most likely even tolerate the grinding because the meat of the game is prime. However, there is also a category of the players who would rather skip the ride when they see “heavy grinding freemium with no premium version.” Just so you know. 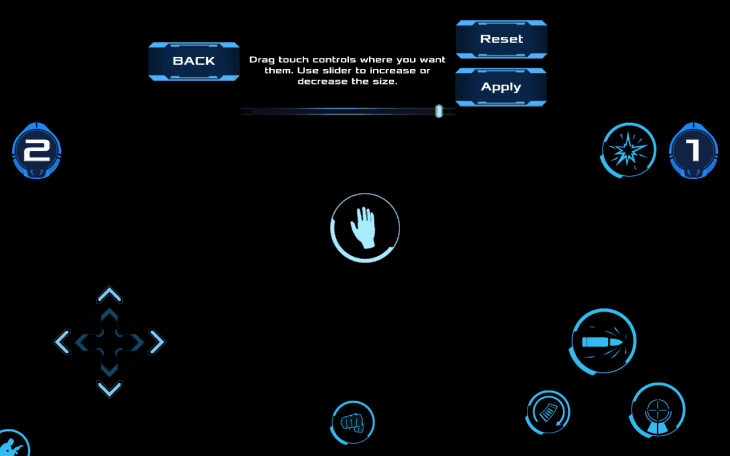 I have experienced no performance issues, other than a little lag when switching to the sniper mode. iPad Mini is in the list of incompatible devices while a large percentage of reviews on Google Play report major lags, crashes and game not loading.

Dead Effect 2 is one of the best zombie FPS on mobile this year. Stunning visuals, consistent, if not a bit immature in its verbiage, story with full voice-over, decent RPG tech and skill trees, perfectly timed missions and difficulty levels, high replayability is enough to make a very good game. There is some heavy grinding, and I would encourage players to spend the real cash on IAPs if it weren’t for the old tale of endless IAP loop. A premium version of the game without the ridiculously expensive weapons would satisfy the paying segment of the market. Fixing the performance issues for the weeping fans on Android currently left behind would up the Google Play rating.