Since Dead Trigger was the first iPad Shooter I actually spent more than a few minutes playing, I was pretty excited for the release of the sequel: Dead Trigger 2. I felt like if they could take the same concept as the first game, but just work to improve what they already had (while adding in some additional features like Multiplayer), they’d have a fantastic game. 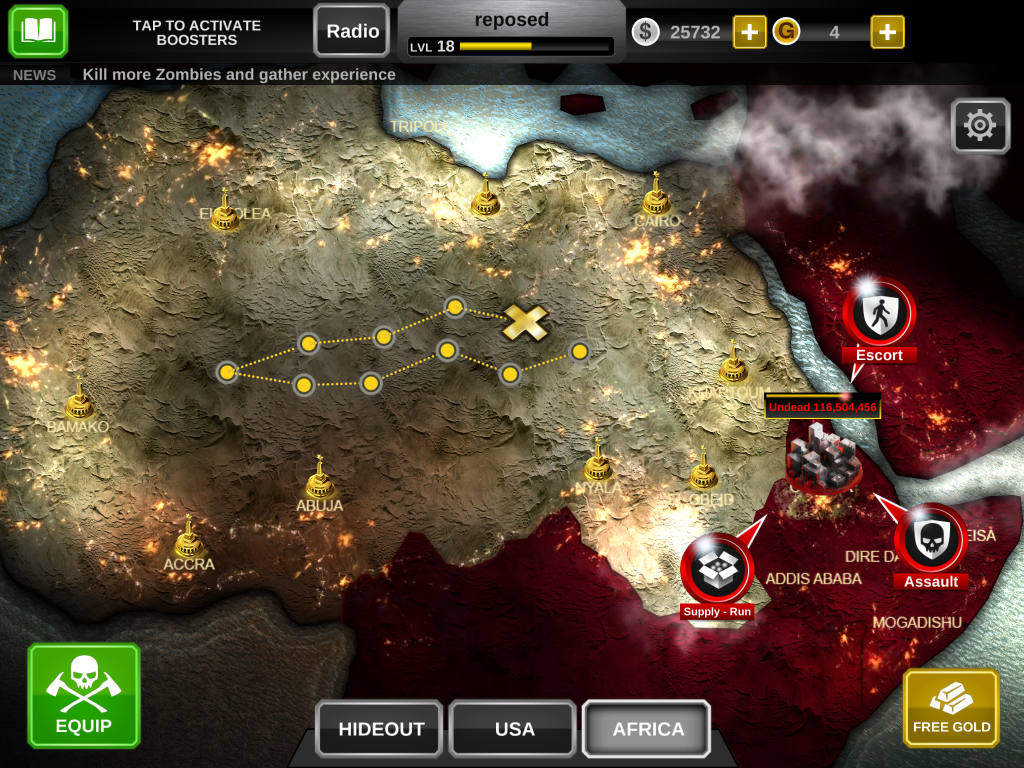 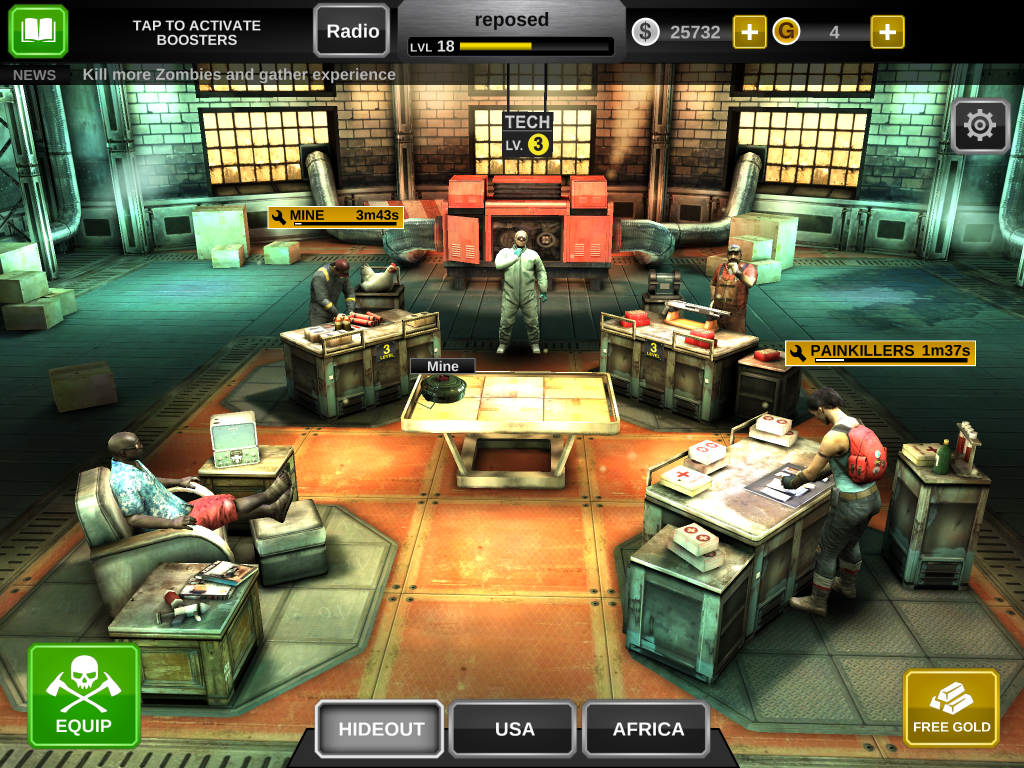 After playing for the first 20-30 minutes, I was really impressed, there were major improvements to game mechanics and the graphics were vastly improved as well. However, there are some major issues with this game that are really holding it back, and I’ll get to that later.

Dead Trigger 2 has a major emphasis on combining RTS aspects with an FPS resource grind style of gameplay. You’ll work on completing various missions to find blueprints for weapons and equipment, as well as cash to upgrade your workers and pay to build items and guns in the Hideout. There is a story mode, but unfortunately it is extremely short and leaves players pretty unfulfilled.

Although there are 20 story missions to complete, they can take anywhere from 2-5 minutes to complete, and there’s nothing to stop you from just blazing through the campaign and being done in less than two hours. This isn’t the end of the world, but Dead Trigger 2 lacks any sort of a viable endgame – in the previous game, there was an arena mode which kept me coming back. Unfortunately, the “city captures” offered by DT2, simply offer the same handful of missions to play over and over and over again with very minimal rewards. 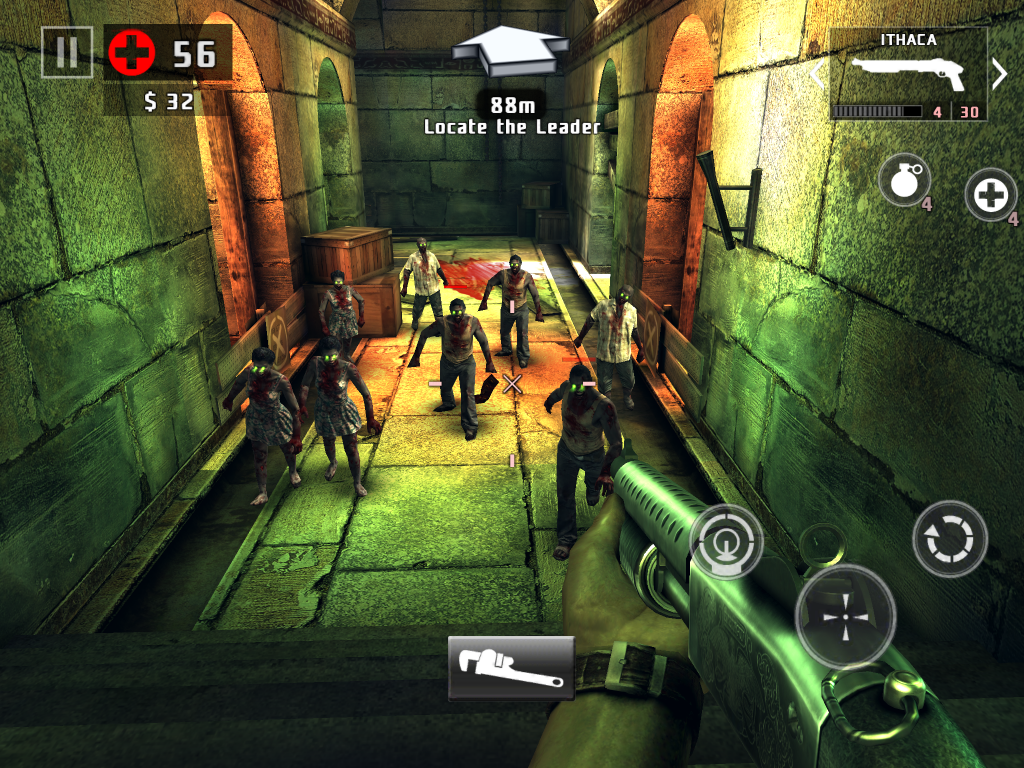 Missions are always entertaining however, which is the only reason I still play Dead Trigger 2 from time to time. It’s takes a very long time to save up for good weapon upgrades, but when you do it’s always exciting to see how long you can survive a S&D mission. Although that can be fun, you really have to go out of your way to make it happen, since the game offers little incentive to kill as many zombies as possible; in-fact, completing missions as quickly as possible usually pays out better since you only get bonuses for finishing the job. As I said before endgame focuses on city captures, which is basically a worldwide death toll for zombies that must be met in order to take over the next city. I imagine they’ll add more story missions once enough cities have been captured, which would be nice as we’d see periodic updates based on how much everyone is playing.

Combat is always fun as well, there’s plenty of intense fast paced zombie kiting and killing, as well as the occasional super zombie which could be a fat suicide zombie, a radioactive scientist, or one of the other mini-bosses. You’ve also got access to a nice arsenal of weapons and explosive items to help you take down waves of zombies and the big guys with ease. There’s a few control settings you can tweak as well, allowing you to play similarly to the previous Dead Trigger, as a classic arcade game, or a mixture of both styles. 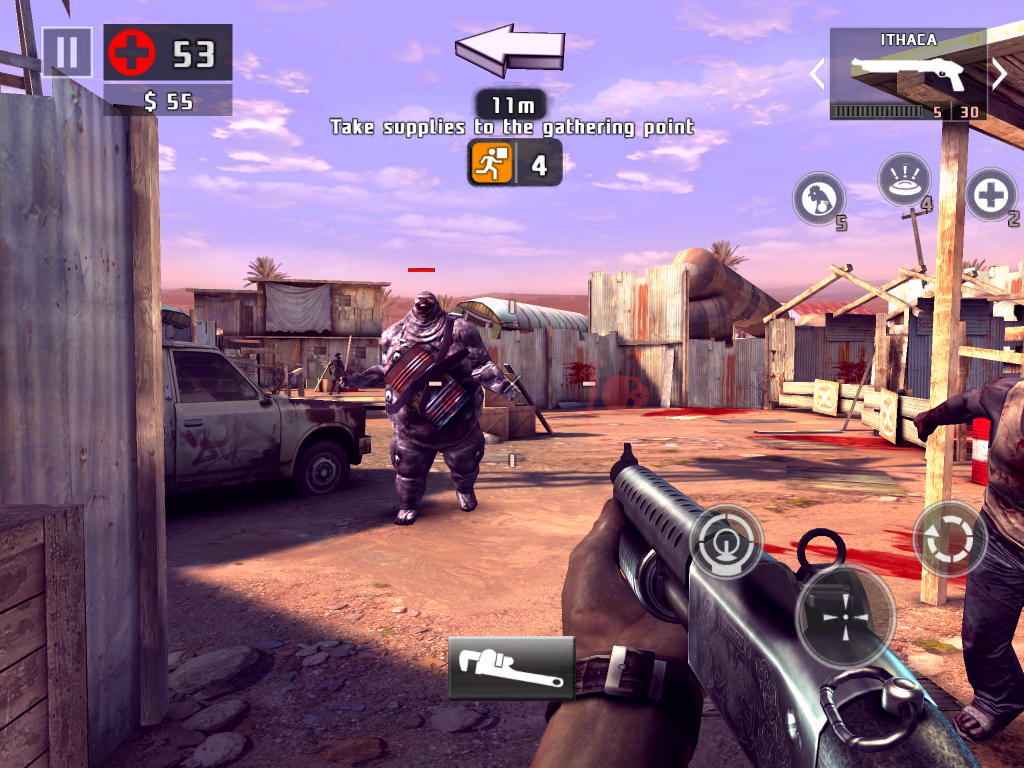 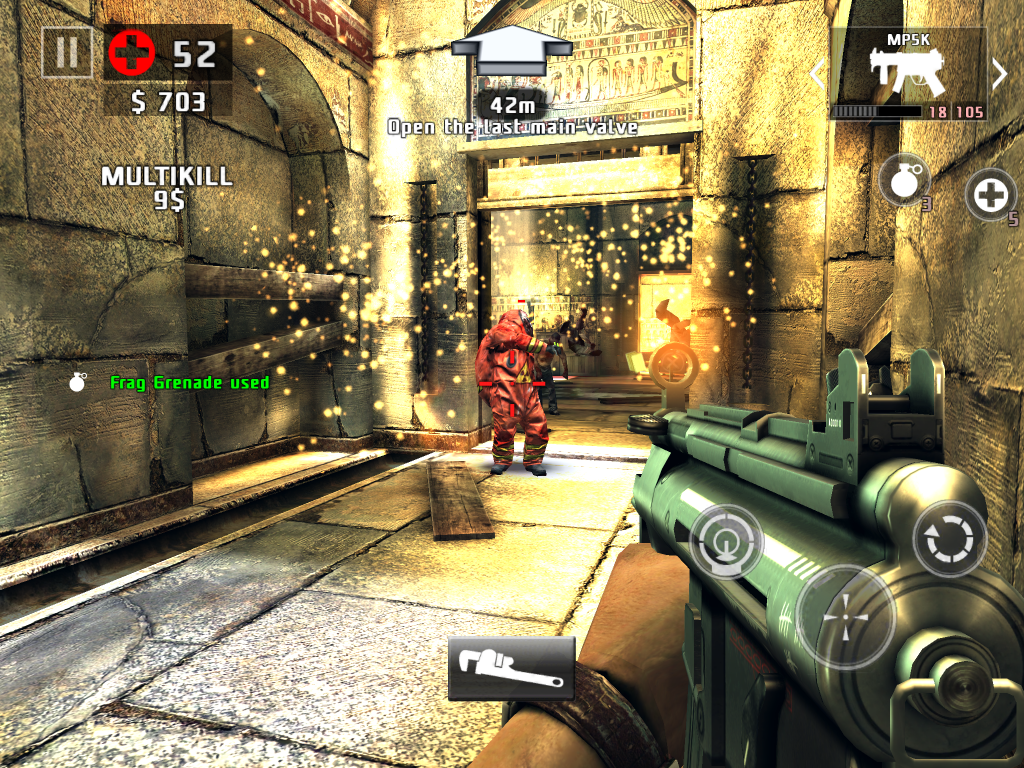 Despite some miscues with gameplay innovation and upgrades, Dead Trigger 2 shines with it’s amazing graphics and clear sound. There are no complaints on my end with the graphics whatsoever, I was very impressed, and everything runs smoothly with an excellent frame rate. While the sound is always clear and audible, there are some instances where the music just doesn’t really fit, and your characters catchphrases get pretty repetitive. Some of the Africa music is pretty enjoyable, as well as the jingle that plays while you’re working in the hideout. 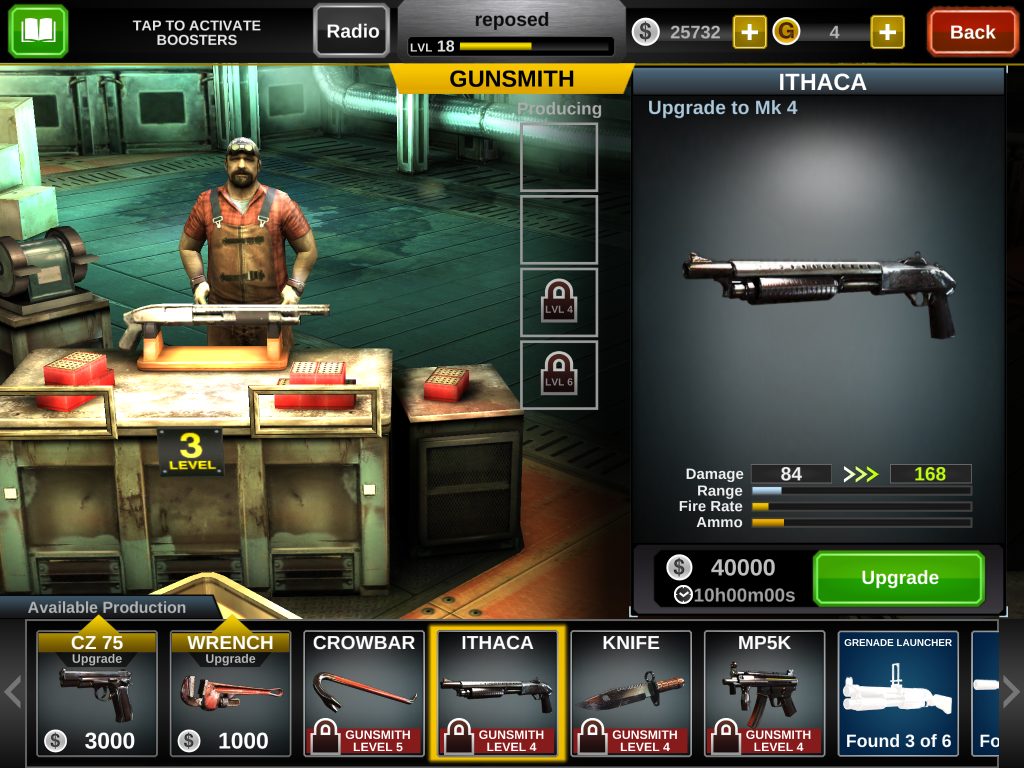 Fast, responsive, intuitive, and easy to navigate – these are some things that come to mind when I attempt to describe the Interface in Dead Trigger 2. I really didn’t have issues with the Interface in the previous game, except for the fact that you could fire your shotgun twice, tap reload, and you’d still reload like you fired off six shots. Fortunately, that is not an issue in DT2, and they’ve also fixed a lot of minor issues while retaining the previous game’s ease of use. One issue I had, and this is somewhat of a control issue as well, is if I tap to active my walking function too low on my iPad (or other device), I can’t move backwards and I end up getting stuck with a bunch of zombies in my face. I’d like to just move backwards if I tap too far down in my device, but it’s not like I can’t just tap a little higher as well.

In-game controls and interface go hand in hand since everything is a touch responsive, you’ll be able to switch weapons and use items on the top-right hand part of the screen just like before; moving, aiming, firing, and reloading can all be done with various buttons on the bottom-left and bottom-right corners. You’re able to switch the control style as well to make it feel more like an arcade game, with this, you’re able to just tap on the screen where you want to fire instead of trying to aim your weapon. I’m just glad that you can choose between the styles and switch it up, instead of just being forced to deal with one option.

I’ve knocked on DT2’s endgame a bit already, and since endgame is a huge factor in Replay Value, that’s going to be the main focus here. The thing is, I know DT2 could have a fantastic endgame if they added the Arena mode from the first game into the second, alongside the current city captures. That addition alone would bump this category to a 9, but unfortunately, there’s no Arena mode. I am very curious to see where they take the city captures, it’s possible they could add a new game mode every time an entire area is taken over, and Arena mode could easily be one of those additions. Currently, to battle in the city that is in the process of being captured, you pick one of three random mission types and every zombie you kill counts towards the total required to take over the city. These missions get boring pretty fast since you’re doing the same ones over and over again with a very small selection of randomly chosen maps.

Hopefully there are some updates coming sooner rather than later, but only time will tell what’s in store for the future of Dead Trigger 2.

Even though there’s some frustrating elements (most notably the lack of things to do post-campaign), Dead Trigger 2 is still a free to play game with amazing graphics and intense combat. If you like shooters, zombies, or both, you definitely should check out Dead Trigger 2. 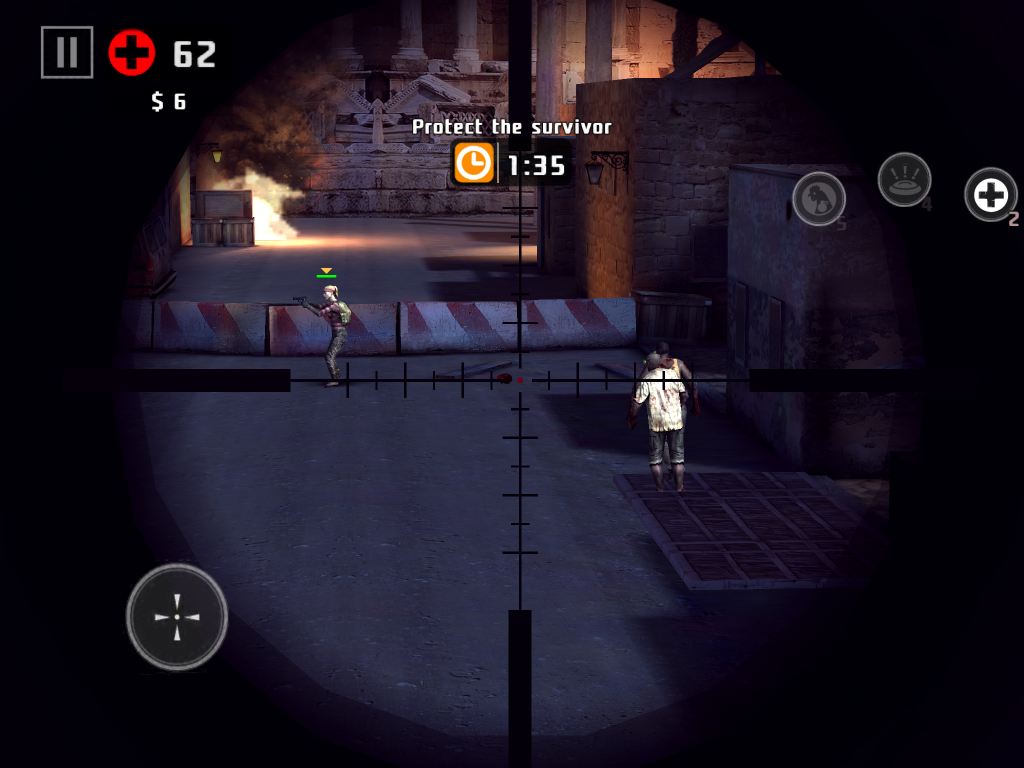