A handful of really good games have been hitting the app stores over the past couple of weeks, such as Modern Combat 5: Blackout and Micromon. There are others as well which are already seeing a positive response, as well as some smaller games worthy of noting — such as Deep Loot. It’s a free to play game with a very simple, yet moderately addicting structure. It may not be game of the month material, but certainly trying out. Read on for the full review!

It’s not that Deep Loot features anything visually groundbreaking, in-fact, it still uses the same age-old 16-bit format that so many mobile games use as well. Regardless, when it comes to mobile graphics, it isn’t always about how advanced and flashy they are — but rather how unique they are, and the variety offered. Deep Loot has a huge variety of different character and ship models to unlock, each with it’s own advantages/disadvantages.

When the primary goal of the game is to unlock as many different costumes and ships as possible, they simply have to look cool enough for the juice to be worth the squeeze, and they are. Beyond the unlockables, there is also a vast deep sea to explore. The sea is split up into what is essentially three different areas, but could be broken up even further. Standard dives begin around 20m deep, and the environment continues to shift and become darker the further you go under. Also, each dive offers a re-arranged map of loot and scenery to find. 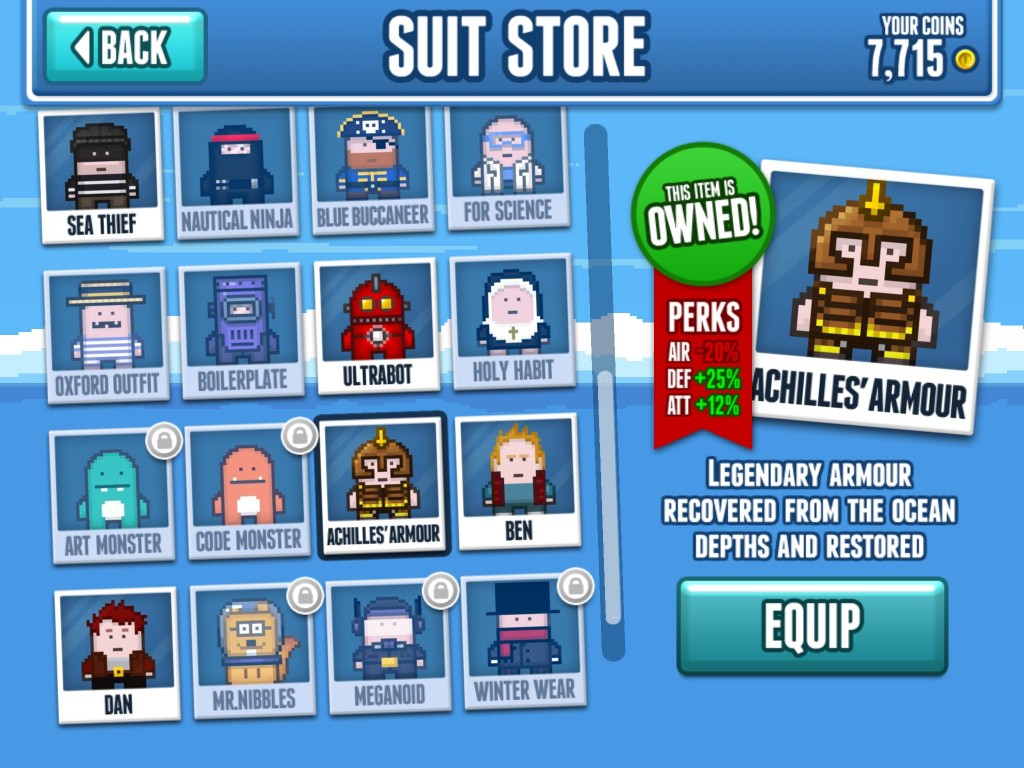 There are tons of different fish you’ll encounter as you explore the sea, but you can’t help but wish for a few more fish models as you encounter the same ones on every dive. Loot found in treasure chests is always a treat to the eye, and a lot of it is collected into a set, which you can view the progress of in-between dives. This includes sets of weapons and armor, jewelry, and even dinosaur bones. Overall, the most rewarding aspect of this game is it’s visuals, and it works out very well in this particular case.

So other than navigating the deep sea on a quest for treasure, you’ll also have to battle various fish you encounter, and manage your air tank to avoid ending a dive too early. A lot of other factors play into these things, such as your dive supplies and costume. Certain costumes give more air to your character, as well as buffs to offense and defense (although some can lower certain stats).

Your dive supplies can be purchased in-between dives, and stack up to 9 of each item. It’s a good idea to always have the maximum amount of air supplies and keys, as these almost always pay for themselves. Try to set some coins aside to save up for actual skill upgrades: Air Capacity, Digging Efficiency, and ATK/DEF can be permanently upgraded for a few thousand coins (cost increases dramatically for each tier). Getting new boats is the most costly of all however, with some boats being 100,000+ coins. 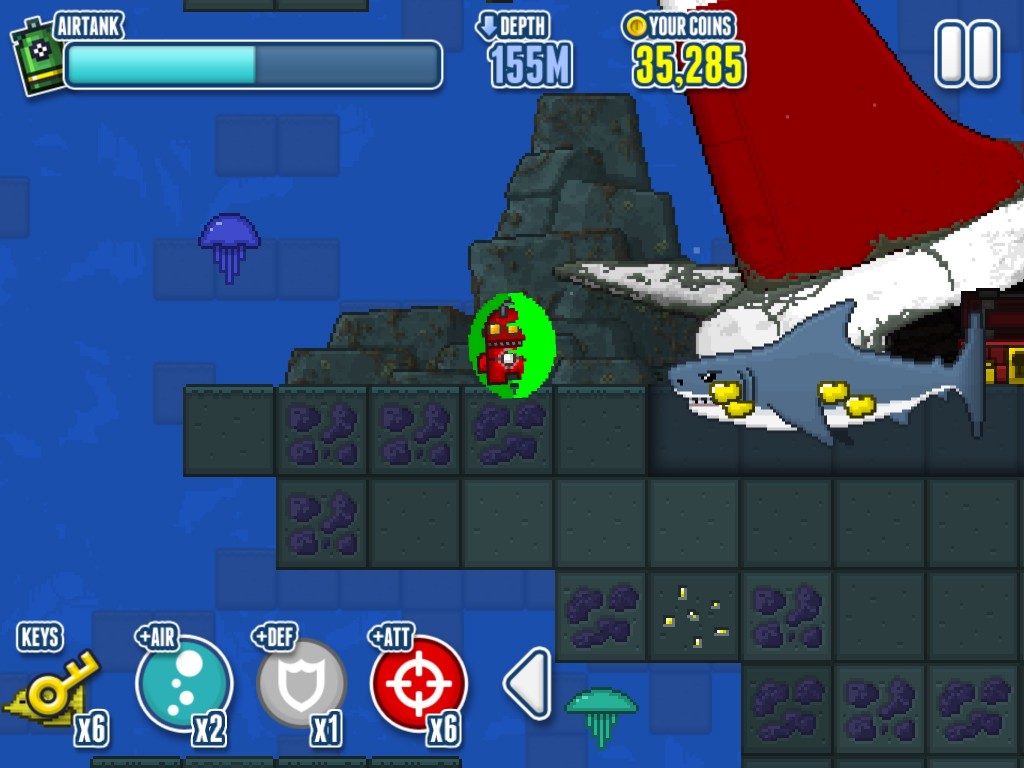 As you dive and explore the ever-changing sea, you’ll be able to open up loot chests with items for your collections, and each item gives you a certain amount of coins too. You can open chests and collect loot just by tapping on it as long as it’s visible on your screen, however each tap uses a bit of your air supply. If you walk into the items you will automatically collect them without using extra air, but it can end up costing more air if you need to navigate around dirt blocks to get there. Fish will be feisty as well, and can damage you, and that damage comes directly from your air supply.

Players are also tasked with certain challenges that grant XP/coins upon completion, as well as a new task to work on. There is actually quite a bit you need to get the hang of before you start having really successful dives in Deep Loot, but the underlying theme of the game always remains the same. Hopefully, they will release updates with new areas to explore and new collections of loot to find, but in it’s current state there isn’t quite enough available to merit a higher gameplay score.

Deep Loot’s menus are all pretty easy to access in-between dives, and you can quickly view your collection progresses, purchase dive supplies, and change your costumes/boats with a few taps. Everything is pretty much perfect when you’re not diving, but once you plunge into the sea, things get a bit messy. Now, for the most part, it’s not too bad — you can tap a small arrow to pull up your dive supplies, and easily hide this as well. My biggest problem is the movements which seem a bit un-responsive at times unless you take things very slow. For example, if I moved a bit too far in the wrong direction, it didn’t always take my correction immediately and I’d end up wasting air. This is partially my fault for going too far, but there’s no reason I shouldn’t be able to adjust with a quick tap in the right direction. It didn’t affect me too much, and it was mostly an issue when I’d get into fights with multiple fish as a result.

I recommend you take things slow when diving, make every single move count, and you’ll be fine. If you try to rush through the dive to get loot faster, you’ll end up wasting more coins in supplies than you’ll actually earn as a result.

I can’t say this game isn’t addicting — while playing, there were numerous times where I told myself “one more dive”, but ended up doing five more dives. There is just so much to unlock, and a lot of it can be obtained in a few dives, while some items require hundreds of dives to acquire enough coins to unlock. Even though the gameplay remains almost identical after you get a method down, you’ll keep wanting to come back to unlock more costumes, boats, and upgrades. 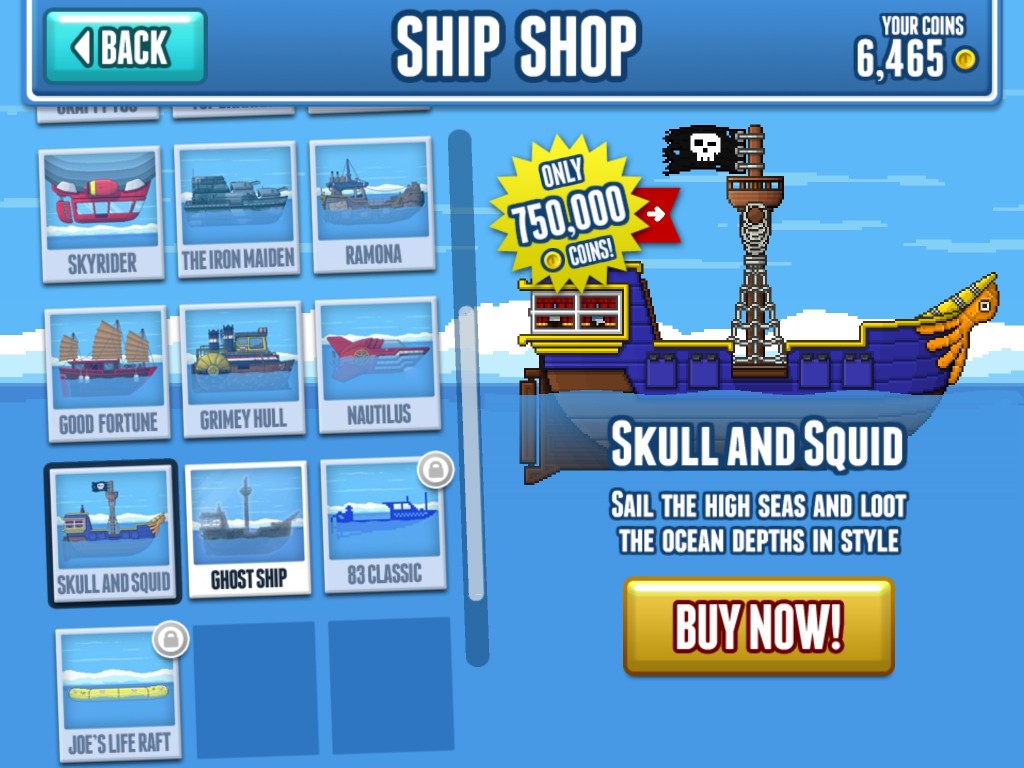 The challenges are a nice way to change things up, and provide an alternative goal for those who don’t want to just blindly scavenge for loot. For the most part, these are easy to accomplish, and can be pretty rewarding depending on the challenge itself. Collections are another huge factor that keeps you coming back, as you’re finding different pieces of loot for different collections every single dive. Completing these can result in major rewards, so it’s simply another thing to keep an eye out for. Still, it is just a bit too repetitious to say the replay value is perfect.

Deep Loot is right on the edge of being a Great game, but since it is free, the 3.9 rating is plenty to encourage players to try this one out. It’s a simple game that anybody can enjoy, and there is enough unlockable content to keep you occupied for hours and hours.

Click here to check out Deep Loot on the Apple App Store!