Developer NORTHWAY Games is at it again, with a brand new visually stimulating game called Deep Under the Sky. This game has a handful of mechanics that remind me of Angry Birds, but the concept is entirely different. You’ll play as a Jellyfish that launches itself around the ocean, bursting, rolling, and grappling it’s way to various nests to plant new jellyfish seeds. There are a total of 80 levels to play through, and there is no failing in the game — however, you’ll want to try and complete the level in as few jumps as possible to get a better score and time.

I rarely give out a perfect score, even in a single category, but Deep Under the Sky was definitely a treat for my eyes. There’s a massive array of neon colors with smooth graphics and bursting particles. Best of all, the game runs ultra smooth, and I never noticed a single dip in frame rate throughout my experience playing. You’ll encounter four unique environments as you progress through the 80 different levels, with a major shift every 20 levels (these are split up into Chapters). Although each chapter has the same feel, the color scheme changes are a welcomed dose of visual variety. 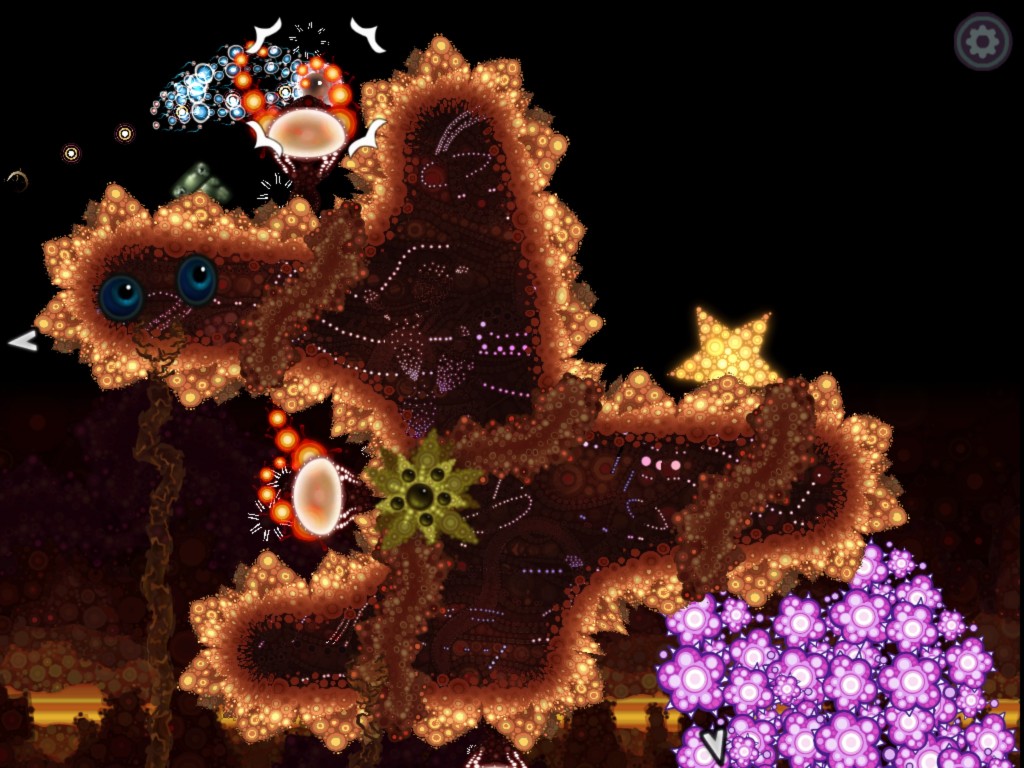 There really isn’t anything that I see in need of improvement for Deep Under the Sky, at least visually. I really appreciate the fact that despite the game being very relaxed, and simple enough for pretty much anyone to play and enjoy — the graphics are still phenomenal. Overall, the initial appeal for this game is undeniable, it will have you intrigued at first, and then astonished by the smooth and polished in-game graphics.

At the start of the game, the gameplay mechanics are about as simple as can be, just tap to launch and then tap again for another boost. With each passing level, the difficulty slightly increases for the given mechanics. Eventually, you’ll reach a point where a new mechanic is introduced, such as holding your tap to roll on the surfaces, or tapping to shoot a grapple hook out above you. There is usually a new mechanic introduced at the beginning of a chapter, and then older mechanics are worked in as you progress through that chapter. 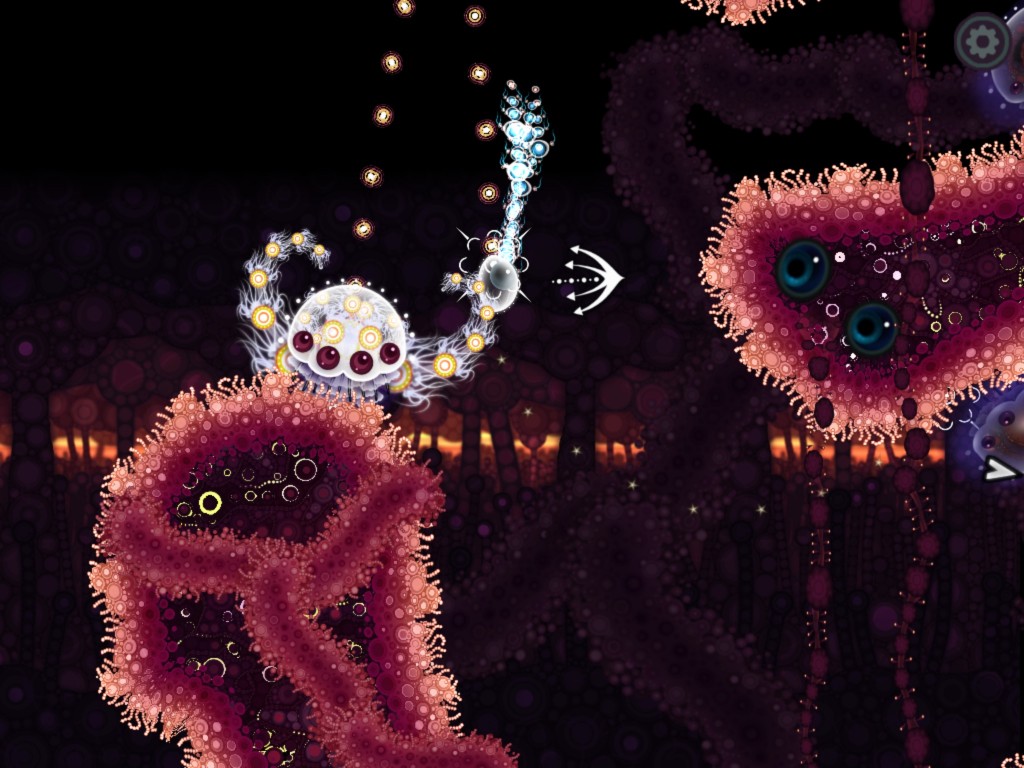 Throughout the entire game, your goal remains the same; detonate yourself nearby each of the glowing yellow spores on the map. There are also a couple of golden stars on each level which grant a small star icon in your level history, which adds a nice replay value incentive. Although it’s a fine concept, I would have liked to have seen some alterations to this aspect of the gameplay, at least at some point in the campaign. It never necessarily becomes stale, but there are points where it feels just a bit too repetitive.

Still, there are enough changes to the mechanics to keep you entertained. And there is a surprising amount of depth for a game that essentially has one button.

Like I said, this is a one button game, so that doesn’t leave a whole lot of room for a poor interface. The single tap always felt responsive, and you can tap anywhere on the screen, so it’s pretty much impossible to mess up while playing. One thing I liked about your UI is the small directional arrows pointing at each of the orbs you need to plant seeds on — they aren’t always visible on screen, so it helps prevent you from wasting jumps trying to find them. 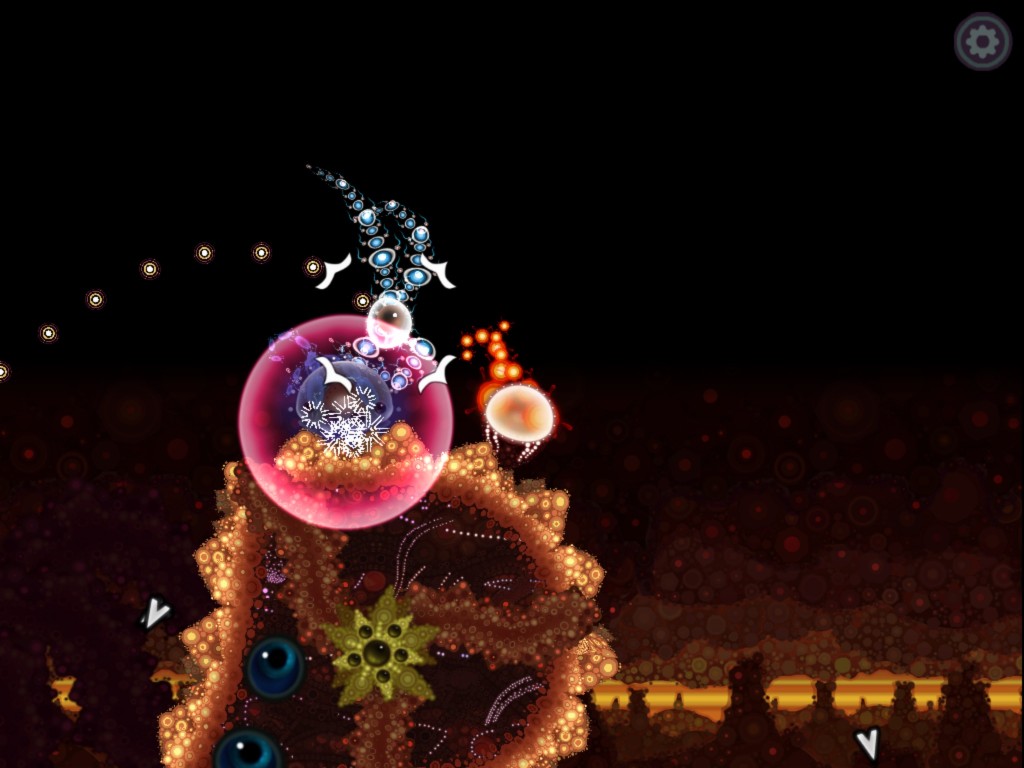 I wasn’t a fan of the menu interface, however. When choosing a chapter, you pick based off of a small icon with the color scheme of that chapter. This is fine if you’ve played the game enough to memorize what each one looked like, but it can become a trial and error process if you’ve got a poor memory. Alternatively, I would have much rather seen a simple four option menu that says “Chapter 1, Chapter 2, Chapter 3, Chapter 4”, and you can just tap the one you want to play.

With 80 levels to play through, there is quite a bit of content to enjoy in this game. To be honest, you could probably complete every level in not more than an hours time, but you’ll need to take your time if you want to get low-shot totals, as well as collect all of the stars on each level. As long as a game can keep you invested throughout the entire campaign, that is a great factor in replay value, and Deep Under the Sky is able to do this with ease. It may not be a game that I’ll play every day from now on, but I can see it being a fun one to pick up every now and then to see if I can beat my old high-scores. 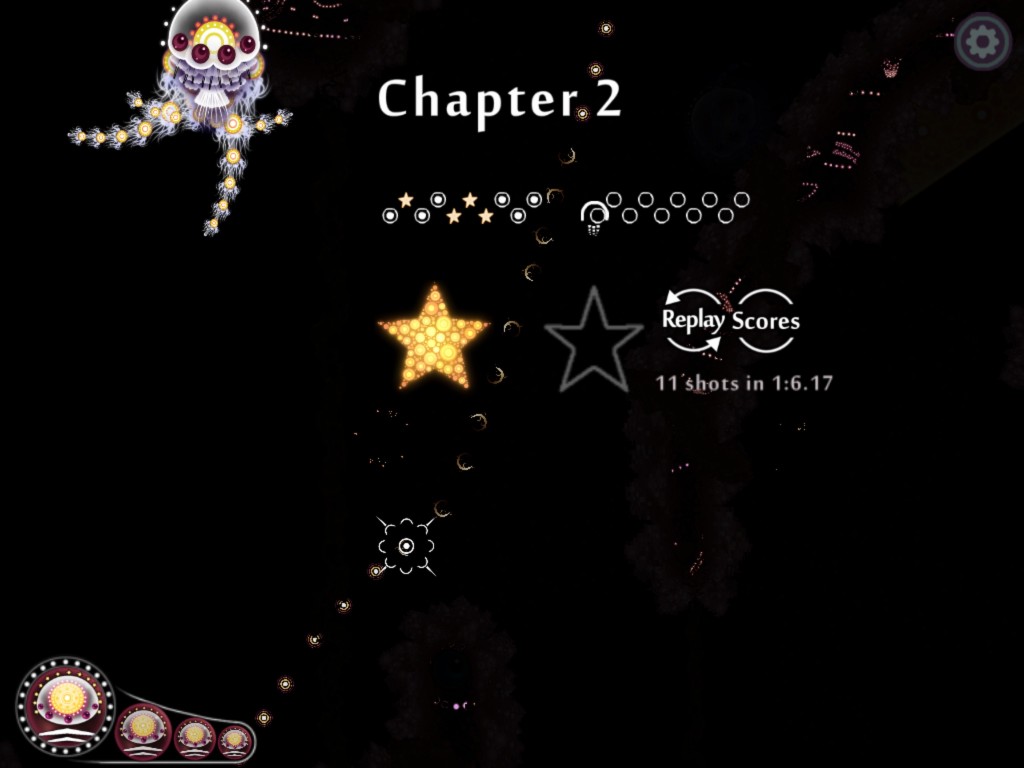 It might be cool to see some sort of multi-player mode, where you can challenge friends to a certain level and see who can complete it either the fastest, or in the shortest amount of time. Even though the main game mode is a lot of fun to play, it could have a more lasting appeal if there were at least one other game mode to provide a change of pace.

Deep Under the Sky is just shy of Fantastic, but still a really great game that anyone can enjoy. The controls and core gameplay concepts are simple, yet addicting (not to mention visually rewarding). It is enjoyable throughout all 80 campaign levels, and I know quite a few people will definitely want to play it through again to get better scores. All in all, another great game from the developers at Northway Games.

Click here to check out Deep Under the Sky on the Apple App Store!

Did you like this review? Make sure to leave a comment with your thoughts and opinions about our review, as well as the game itself!