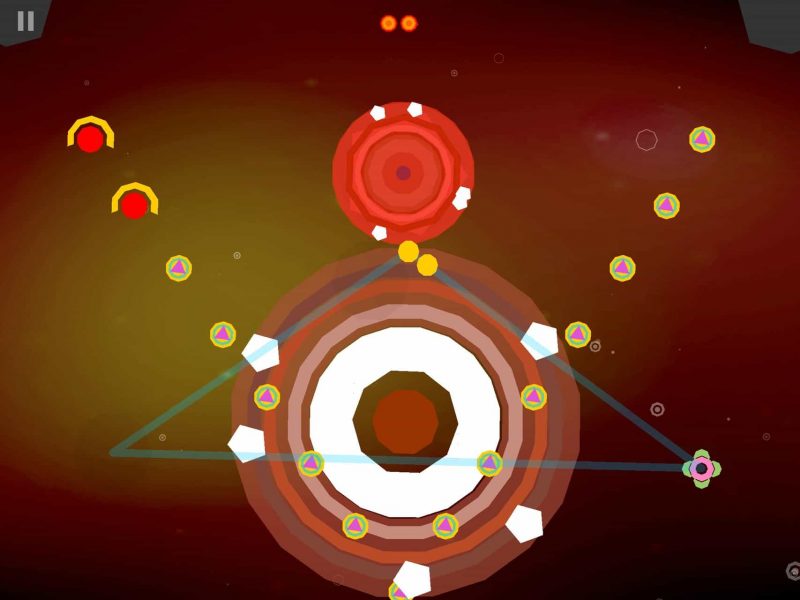 If you can’t stand highly explosive chain reactions, you better get out of the Destructamundo kitchen. Bad jokes aside, we’re looking at a fun little arcade game today that gives you three explosions to blow up everything on the map. It is $2 to purchase (available on iOS only), and there are no IAPs after that, so you won’t be spending any extra. There are 72 different levels in the game, but plenty of incentive to go back and re-play old missions without it being exactly the same. Everything sounds good on paper, but does the game actually deliver? Let’s find out!

Destructamundo has a pretty cool feel to it, and I really liked how the visual atmosphere had a retro feel, but didn’t look like it was straight out of the SNES. Although I still like to see games with high-end 3D graphics, it’s not a bad thing to get some with basic visuals — as long as the game remains smooth and polished. I really didn’t notice any glitches or bugs as far as graphics were concerned, and overall the game run extremely smooth with no lag. I really liked the visual variety that this game had to offer as well, with a lot of really unique Gameplay elements that translated to a really cool graphic. 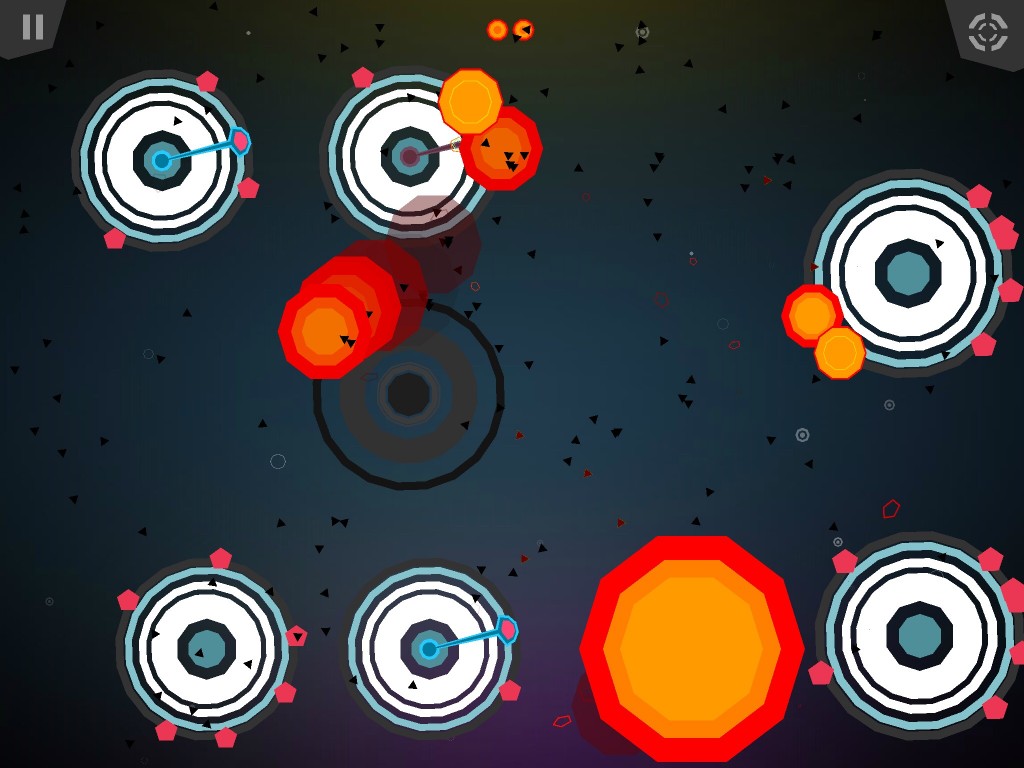 The level selection menu was very sleek and well designed too; it basically splits up all 72 levels into three parsecs, which are essentially different worlds with new backgrounds. You can easily see which levels you’ve completed, and you’ll see a golden circle around ones you’ve completed with a single detonation — as well as how many resources you’ve acquired from that specific level. Overall, Destructamundo was firing on almost all cylinders when it comes to the looks, but it would have been nice to see a tad bit more detail and polishing in some areas. Still, it’s definitely a high point, and delivers a unique retro feel.

Blow up everything by any means necessary

Your main objective is to blow up every object you see at the start of the level, and this is done by creating a chain reaction of explosions. Simply tapping on the screen will create one small explosion, but for every object that blows up, another explosion is created. Because of this, you could tap on one corner of the map and blow up one little object, and potentially create a chain reaction that blows up everything else. The key to this is timing, as well as some trial and error — unless you’re really good at figuring everything out in your head.

There will be a lot of fuses you can detonate as well, and these are indicated by a small object that rotates around a platform circle. You can hit these just as you would anything else, but they won’t explode immediately, and instead will quickly move towards the center of the platform to create a much larger explosion. Some platforms will also have shields that need to be broken before the objects on the platform can actually explode, which throws another wrench into the system.

Eventually, you’ll start to unlock some of the items that are available to help you create more destruction. The first of these is a mine that creates a much larger explosion than your regular tap. Later on you’ll unlock the second item, which drops three triangle points and then loops the explosion around. Finally, the third and final item, is orbital spikes. You can only use one of these items at a time, and if that restriction wasn’t in place, it’d just be a cakewalk.

One thing you’ll notice, is that every time something explodes, small triangles shoot out and spread out around the map. These become obtainable at the end of the mission, but only if you completed it with two explosions to spare, meaning you got it on the first tap. It is really important that you collect these resources, and it will eventually become a requirement that you go back and get more if you don’t have enough. Reason being, these resources are what unlocks the items I mentioned above, and you’ll get to a point where the levels are impossible without using a certain item. 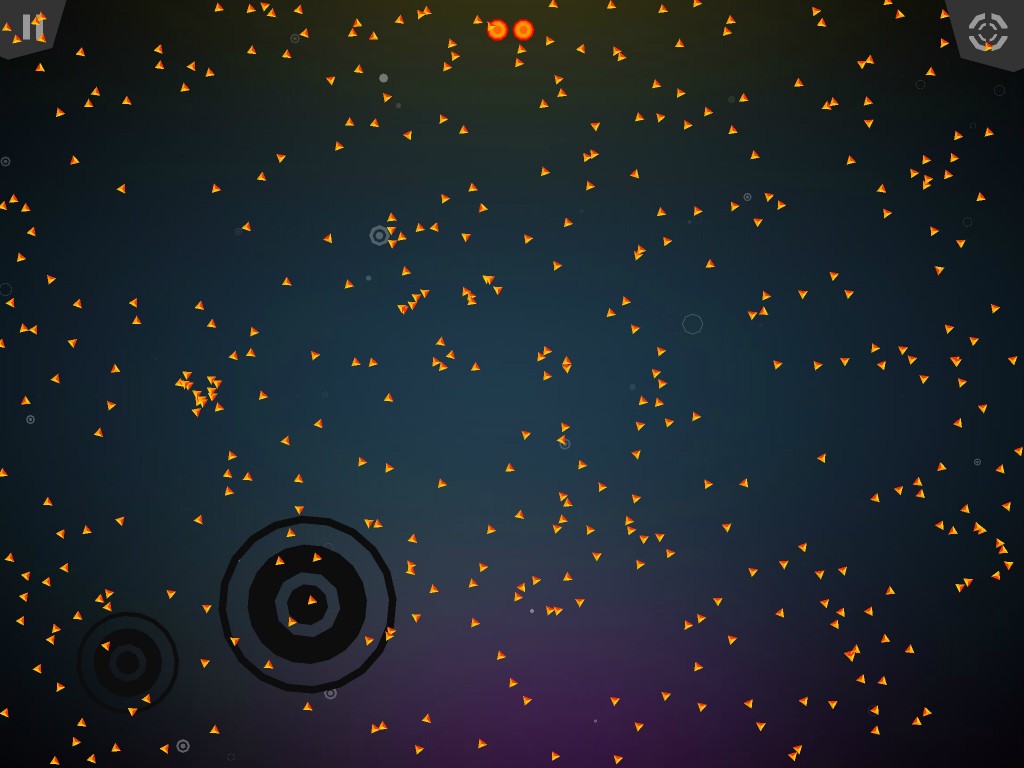 Collecting resources only adds to your total if you scored more than you ever had before on that particular mission. You can get more or less depending on how bunched up the triangles are. This is because you tap on a a certain triangle to start the collection process, and then it goes into a chain reaction of jumping to nearby triangles until there are none in range.

I really like the way the resources/items are set-up, because it helps extended the longevity without making you grind the exact same content (for the most part). Obviously before you get your first item you’ll be re-playing levels the same, but trying to down them in one shot. When you get an item, you’ll want to go back and re-play levels with a new strategy, whether it be to one-shot it for the first time, or farm even more resources than you did before.

There was a pretty frustrating Interface related bug that unfortunately popped up rather frequently, and it was related to item usage. Every time you want to use an item, you need to tap the item menu from the top-right corner of the screen, and then drag your item onto the map. The problem is, you can easily tap too far up into the corner and use a detonation, which is especially annoying when you’re trying to finish the level in one shot. In addition to this, I didn’t like how you had to drag your items onto the map, and would have liked an option to simply tap and place them.

It’s tough to find an Arcade game that really sticks out now days, but Destructamundo is definitely a shining star. Although the campaign is relatively short, and once you’ve finished the very last level there isn’t a whole lot of incentive to play through it again — it is still well worth the $2 purchase. Hopefully they can patch up the minor Interface issues I mentioned, but either way, I’d recommend this to anyone looking for a fun and relaxing mobile game.