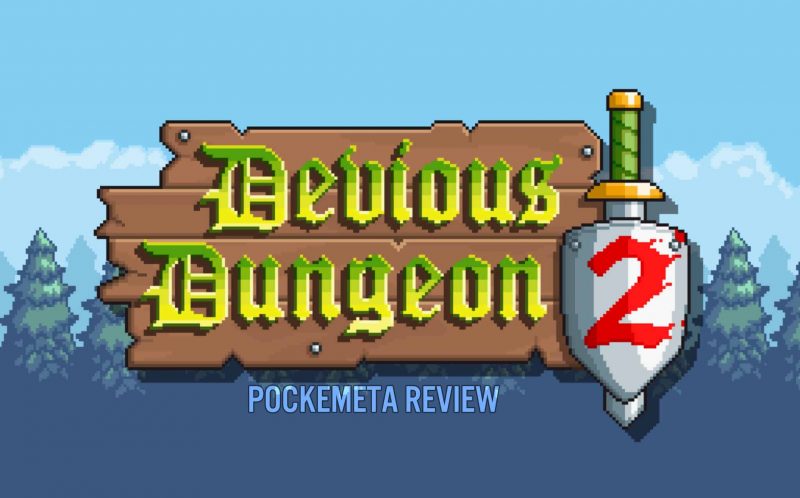 It’s been a good while since I’ve dipped my feet in a good mobile platformer, and after hearing positive things about Devious Dungeon 2, I figured that’d be a good one to check out. Although I’ve never played the first game, I don’t think there’s a whole lot of story continuation I need to worry about, but also don’t expect any comparisons between the two. At a financial glance, what we’ve got here is an iOS exclusive that costs a mere dollar, and the only IAPs offered are basically a non-premium currency boosters.

Devious Dungeon 2 starts you off with a choice between three classes: Barbarian, Mage, and Rogue. It doesn’t really matter which one you pick, because you’ve got three different save slots, so you can go back and utilize one for each class. Each class has it’s own type of attack, obtainable gear, and special abilities. Once you’ve chosen a class, you get a brief tutorial to show you the ropes, and then the journey begins. A small town map serves as what is essentially the pre-mission menu, where you can buy items with your coins, or buy coins with your cash. 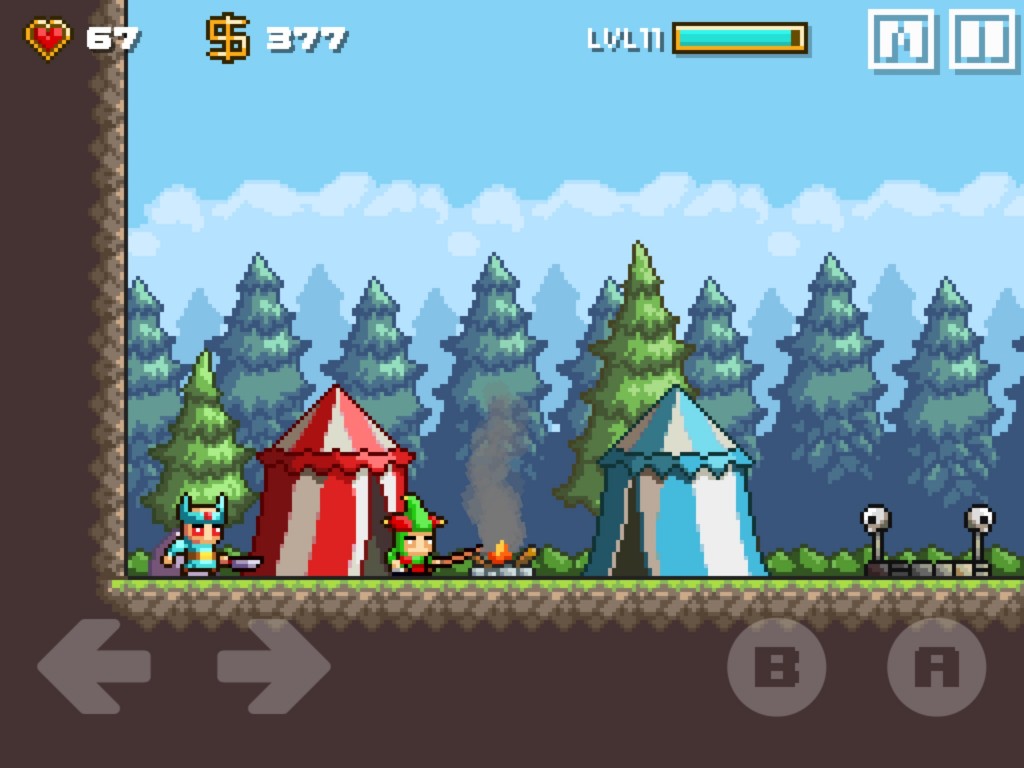 The pixel-art style is pretty well done in DD2, although it’s a relatively over-done artwork style at this point in my opinion, it does work very well for these kinds of games. It has a nice transparent interface that is easy to use and doesn’t get in the way, and there are a lot of detailed sprites outside of your own character. There are six different major levels in the game, which makes for six different environments to play on, but don’t expect too much to visually change between individual stages.

Easy to pick up and play

It’s a very simple game, as the only controls involved are a left and right movement, along with a jump and attack button. Outside of that you really don’t need to master much with the controls, the exception being each classes unique ability, such as the mage’s jump and hold to hover. Once you get the hang of the controls, the game becomes a matter of learning the enemies movements and avoiding running into them and their attacks. Some enemies are melee, some ranged, some of the jump, others walk back and forth — and every so often you’ll encounter an elite enemy with a lot more health and a more annoying attack.

Your primary goal however, isn’t to just kill all the enemies, but rather to find the lone key somewhere on the map, and then use it to open the gateway (also located somewhere on the map). You can either try bypassing all of the enemies and just looking for the key to get the stage done with as quickly as possible, or take your time and fight bad guys to get more coins. There is also a hidden room in each stage with bonus loot, which is a great way to build up your coin pile and buy some better equipment.

At the end of each of the six main levels, there will be a boss fight that will actually require you to put your combat skills to the test. Because of this, it’s probably a good idea to not just try and speed-run through the game, but rather get better at fighting and ensure you’ve got top quality gear.

Between the 70+ stages, six big boss fights, and three classes to play through all of it as, you’ve got enough content to keep you occupied for several hours. The six main stages are essentially chapters, each with 4 levels, and 3 stages to a level. You only reach a checkpoint if you complete all three stages in a level, otherwise, you’ll have to restart it. In-between stages, your health is not replenished, so a rough start can ultimately lead up to your demise later on in the stage. This factor keeps the game from being too easy, which also adds a bit to the replay value. 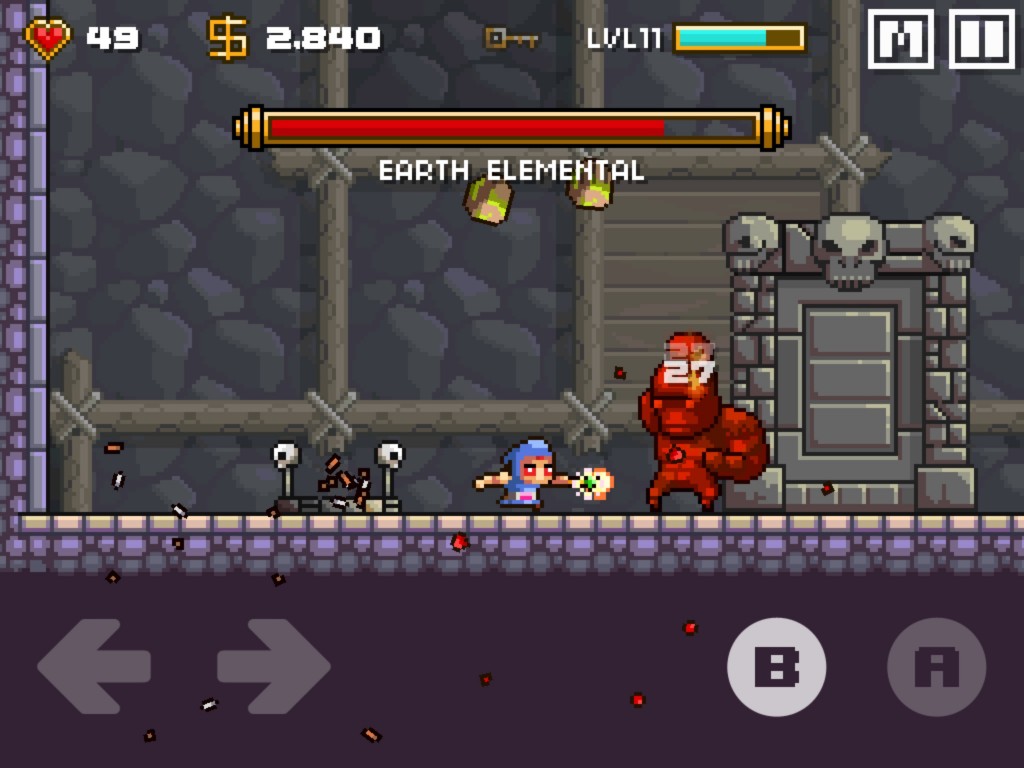 Unfortunately, you’ll probably get a little tired of the repetitiveness of finding the key and opening the door, with a hidden room here and there along the way. Because of this, Devious Dungeon 2 is a lot more fun in relatively small doses, as opposed to trying to beat it all in one sitting. Personally, I enjoyed knocking out 1 chapter at a time, and maybe putting a little progress into the next one just to see what the new environment looked like. It’s not a huge problem, but it does incline me to dock the Gameplay a tad bit more than other categories.

Although it isn’t a free to download game, there is still a small IAP factor. The only thing you can purchase in the game is coin related, which is something that you can already obtain easily in the game with no restriction. You can either purchase a coin doubler to increase the amount of currency you get from playing, or you can purchase a specific amount of coins. As a whole, the IAPs have no hindrance on the game, but simply allow you to pay extra money to make things a little easier.

Devious Dungeon 2 is a well put together action platformer with some nicely done RPG mechanics to add some character customization into the mix. It’ll take you quite some time to complete the lengthy campaign, especially if you wish to do so with the three unique classes. A drawback is that the gameplay concept is pretty simple, and can grow a bit tiresome after 70+ stages of finding the key and opening the door. Overall, however, it’s still a fantastic $1 purchase, and a really fun little platformer.