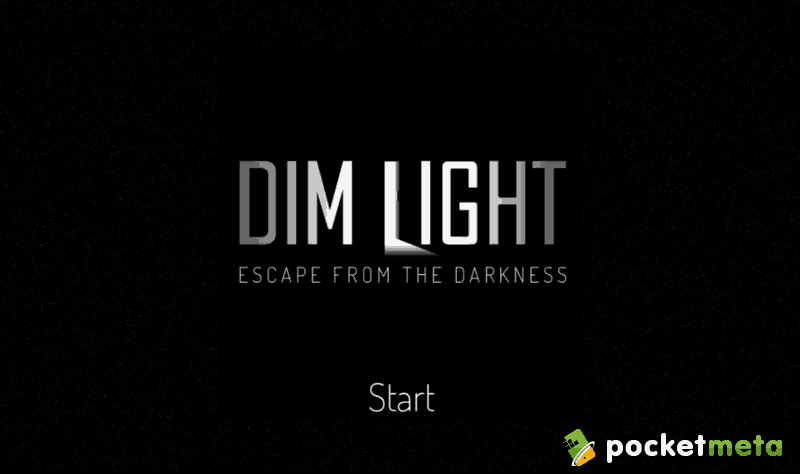 Dim Light is a newly released horror game from a Korean one-man indie developer Oh Beomsu, hope I spelled it right. It comes as a premium game, no IAPs, and if you are on the fence about the purchase, but are looking for a nice horror game, search no more – Dim Light is wonderfully creepy.

In a way, Dim Light reminds me of two other games – Dark Echo and Sometimes You Die. The clean, minimalist design, simplistic mechanics and the focus on audio-visual part to create the atmosphere bring back the memories of my Dark Echo adventure. If you played that delight of a game, you will love Dim Light. 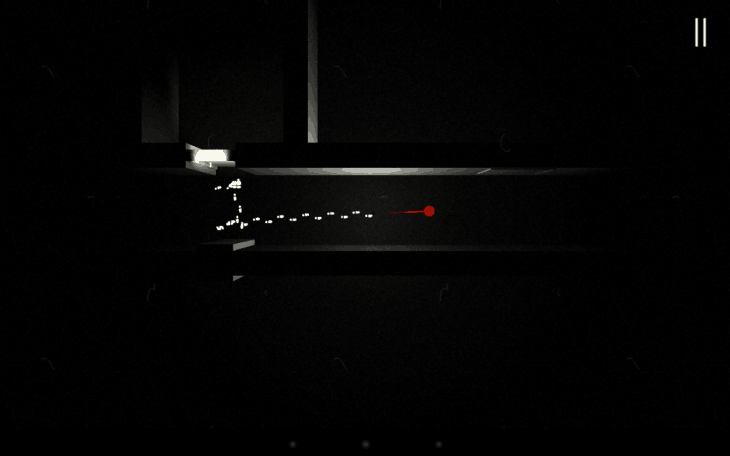 Dim Light is a game about the zombies and human flesh eating mutants. Again. But among the other games in the niche, this title manages to make it really tense and scary. Perhaps the game achieves this effect of hopelessness and fear by removing any weapons from the zombie + lonely hero equation.

You are locked in a hospital, much like Milla Jovovich ends up at the end of the first Resident Evil movie. The lights are out, and you can’t see a single thing. Nothing. You know you have to get out of there because the place is full of “them.” The only means of survival at your disposal is a flashlight that lightens a meager perimeter around you. Well, you also have your wits and two feet, so off you go in search of an exit from the mad house. 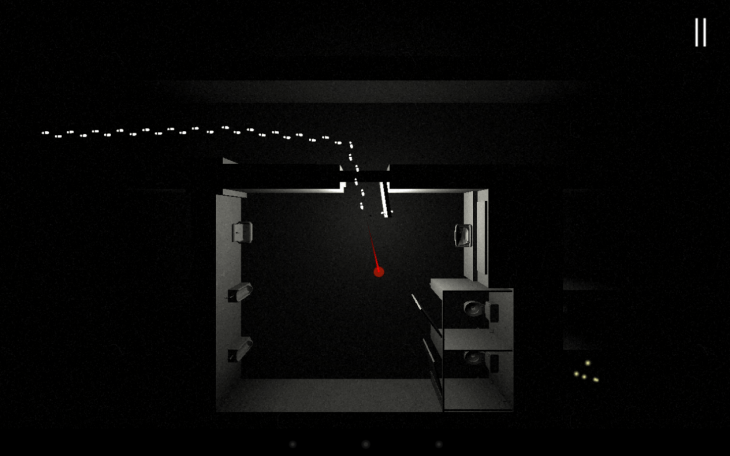 The controls are more than simple – tap anywhere to move there, tap and hold to run, or sort of run. Your hero never moves too quickly because it’s too dangerous – you may end up face to face with a zombie. You can also swipe in the direction you wish your flashlight to shine.

The game is a top-down walking-running puzzle, and each of the 28-something levels consists of a separate area in the hospital. Your aim is to make it alive from the entrance door to the exit door. The time you spend between the doors is a safe haven.

Notably, your flashlight illuminates the parts around you that are also behind the walls. So, if you are walking through a corridor, you will be able to see, partly, what is happening in the adjacent rooms. 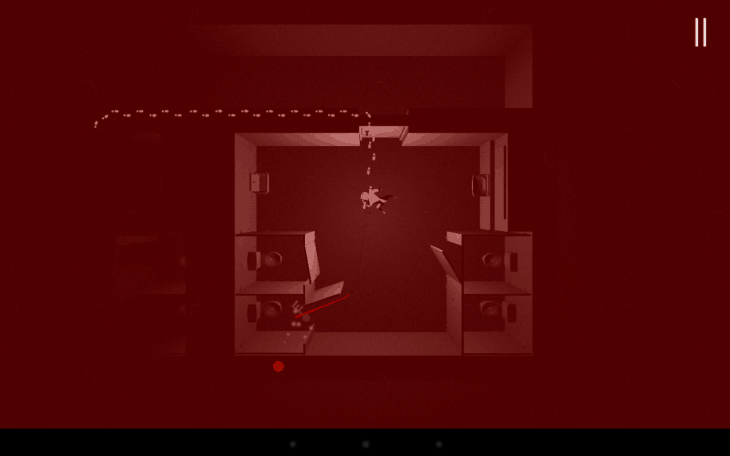 One important mechanic is the doors get automatically open whenever you get close to them. This feature constitutes a great part of the puzzle solving, and you will have to learn how to manipulate that to your advantage rather than doom.

Some levels will see you simply making it through the area without stirring the attention of the dead walkers. However, these areas are few and they are mostly introductory.

The majority of areas will have you thinking fast. Some exit doors will be locked, so you will have to think of a way to enter a room with a zombie in it to retrieve the key and stay alive. Truth be told, I was trying to find interactive elements to help me, but they are mostly deceptive. The levels are mostly solved by the correct trajectory of your run, timely doors opening and closing, and making the close cuts to the exit. 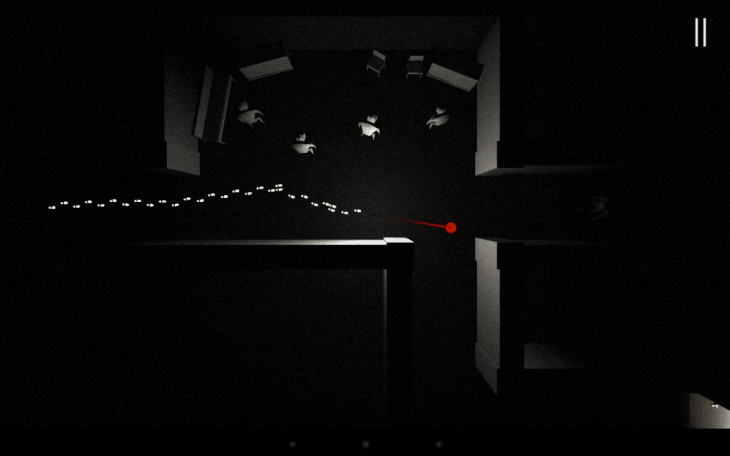 Obviously, I am enjoying every minute I spend with Dim Light. Somehow, it scares me more than any other zombie game. Well, perhaps Pixel Z scares me, too, but the rest of the zombie games, being shooters, look quite entertaining, but never scary. That is the kind of personality I am. I laugh wholeheartedly at the Walking Dead, World War Z and Resident Evil all parts but the first. But any horror movie containing the scenes of stealth creeping past the dormant creeps makes my heart go boom. Dim Light is all about the stealth creeping and tip-toeing, and then running as hell to the exit 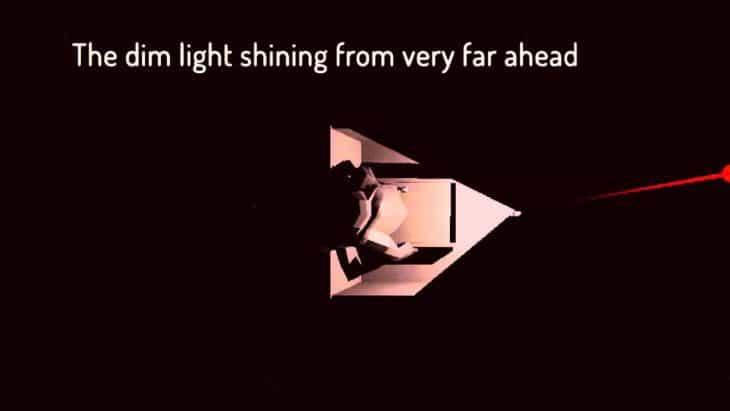 The first time you play, all levels but the first are locked, and you unlock them one by one. As far as I can see, there are up to 28 doors in Dim Light. It takes about 1.5-3 minutes to walk from the entrance to the exit, provided if you have the solution figured out. If you don’t, it will take you several replays and some decent experimentation on your part to solve the increasingly cruel areas. The number of the walkers increases, as you would expect, and at the later stages the creepy human-lizard like creatures join them. They have a pattern and scout their areas, so you will need to figure out how to stay away from their sight.

Depending on how much time you have on your hands to dedicate to playing, you might solve it within a week, or within a couple of days. I prefer to take it moderately, without spoiling the fun of solving the solution on my own, so I might take even longer. When all the doors are solved, you might return to it every now and then if the style and the atmosphere make you tick. Besides, I like the fact that the game actually has the beginning and the ending, and I will finish it without having to drop out because it’s infinite when I need to make room for something else. 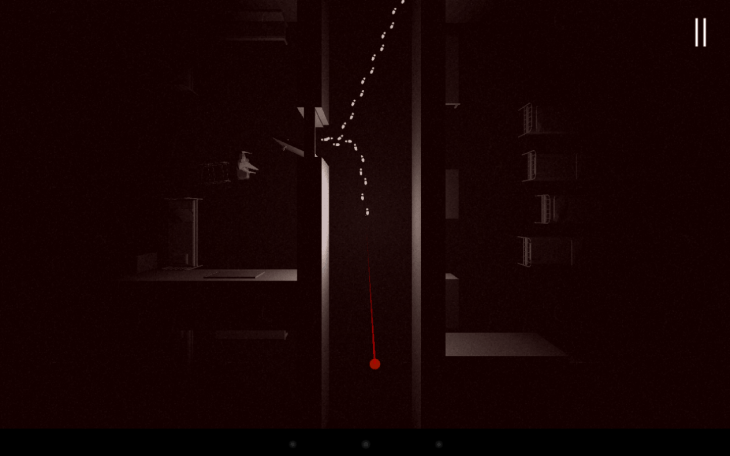 Dim Light is scary. It achieves its atmosphere thanks to the minimalist all-dark environment, the dim light of the flashlight and the audio score of the game. The zombies and the lizards may not be particularly detailed, but the lack of those details makes them even scarier.

Moreover, you can’t see your hero because you can only see his footprints on the floor, which adds a flair of the madness to the entire experience. Whenever you get close to the walkers, you begin to hear them breathe. You can then hear your heart rate increase, literally pumping in your ears. The screen gets filled with the red pulsation. The further you are from the walkers, the less are the effects. The chasing scenes are particularly tense, especially when you are not sure whether you are going to make the cut. Sometimes, you would escape two steps ahead of the zombie, so the odds are never that clear. 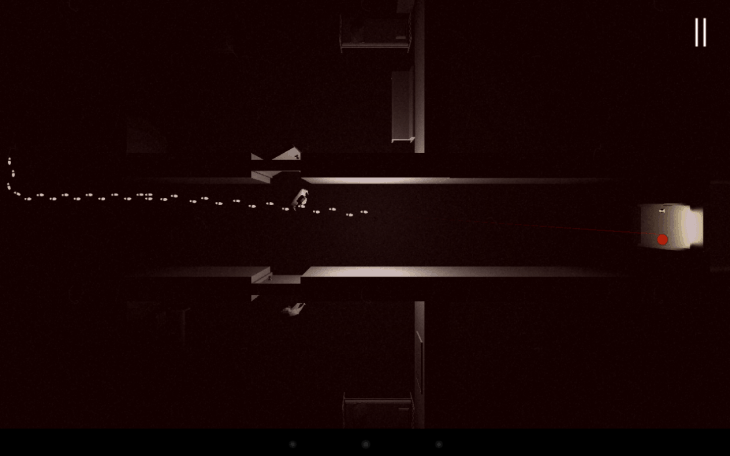 Once again I am amazed how developers manage to create something as intense as Dim Light with a few simple colors and fairly limited number of sound effects. But this game proves again that good ideas and talent make better games than big production budgets.

The game is better when you play it with your headphones on. That way, the immersion is incredible and you won’t be scaring your family with the creepy sounds.

The tension is further amplified by rare, yet meaningful input from the hero. As you cross the divide between the doors, you are given small fractions of his thoughts. They give a little insight into what he thinks is going on. However, the few lines at the end of the game make you wonder whether the story is so black and white as it seemed all the way through the game. The ending is both confusing and inspiring. I am surely hoping the developer might release more levels if this release sells well. And it should. The game is superb. 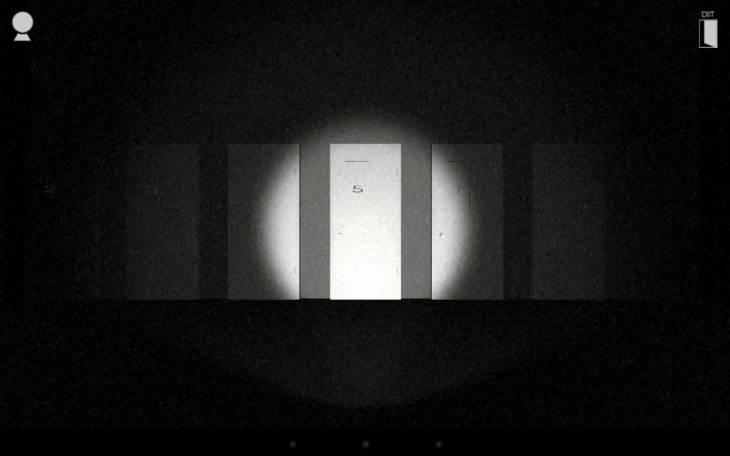 Dim Light is a superb horror for the fans of the subtle scares and stealth creeping rather than shooting the walkers in the face. Your hero is alone and defenseless, so should you lead him into the zombies, he is dead. You need to figure out a way past the perils and find the triggers that can help you trick the walkers. Thankfully, these triggers are limited, and you learn how they work very soon into the game. It’s the increasing difficulty of the areas and the number of the creatures that add the difficulty step by step. It is accessible, yet challenging, and by the time I got to Door 7 I was already replaying multiple times to get the hang of my options. There are various ways of tricking the beasts, and outrunning them. You just have to find the perfect trajectory, use the doors to your advantage and think strategically.

There are some 28 Doors, and a decent play time, topped by a good replay value thanks to the multiple solutions and great tense atmosphere you don’t usually find in the zombie games. The visuals are minimalist and perfect for the atmosphere while the audio score is downright creepy. Play with your headphones and feel your heart pumping in unison with the hero’s. Bits and pieces of his thoughts keep you pondering on the story, and the ending leaves more questions than answers. So, a sequel might be an option. However, to make it possible you need to buy the game first and support the one-man indie developer. We totally recommend this excellent horror walk in the dark.