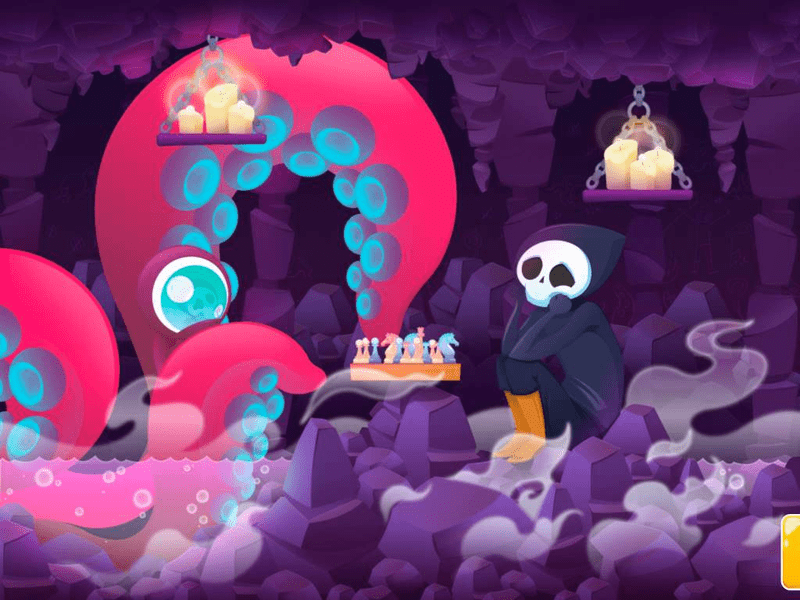 Well, this was a surprise, to say in the least. As much as I am into mobile games, I must have let my mind trip for a split second because I let my young nephews play it. I saw the bright art work, and I think I read the “math puzzler” in the description, skipping the rest, so I assumed this was a good idea to keep them quiet for a while. But as I watched their facial expressions as they set off to playing, I quickly realized my blunder. It’s a horror math puzzler. In other words, you have to play this game first before you pass it to the youngsters. 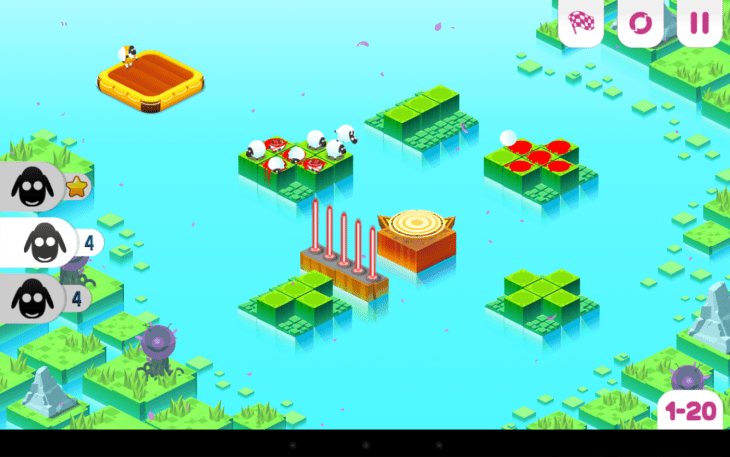 The cutesy graphics are misleading at first because the game is unexpectedly gory and macabre. It’s basically Saw, but with the animals and in the cartoon style. Oh, and when you think about solving puzzles to save someone, it becomes even more Saw-like. Never liked that movie.

There is this Grim Reaper who “wants to make some sheep friends.” But since he can only be friends with the dead, he set up a major flood to sink the adorable fluffy creatures. Alas, the game goes from bad to worse. To massacre more sheep, he sets up the lasers, the barbed wire fences, the hoards of wolves and then adds the pigs to complete the picture and make the vegans completely horrified. 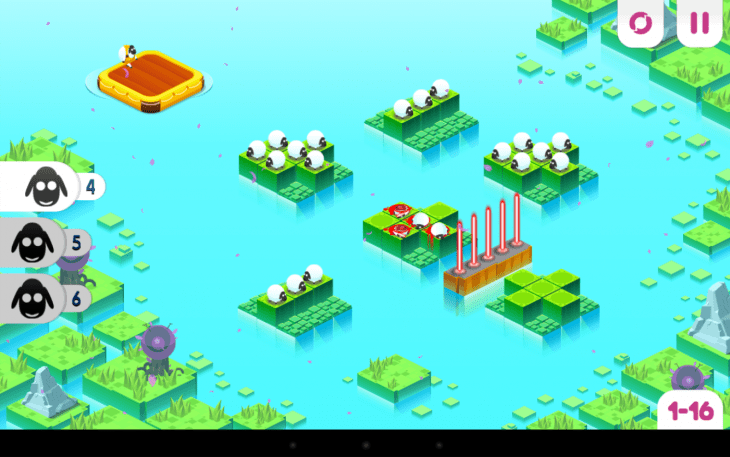 So, your sheep are stranded on small blocks of ground in the middle of the river, and your objective is to save them. It will do you good if you know you can’t save them all, and the game intentionally makes you kill some to save the rest. Sometimes, it’s the other way around – kill many to save a few.

Each piece of ground is a set number of blocks, and the exit point for your sheep is the raft. You have to get the sheep from their little islands to the raft by swiping and moving them from one island to the other until they get on the raft. 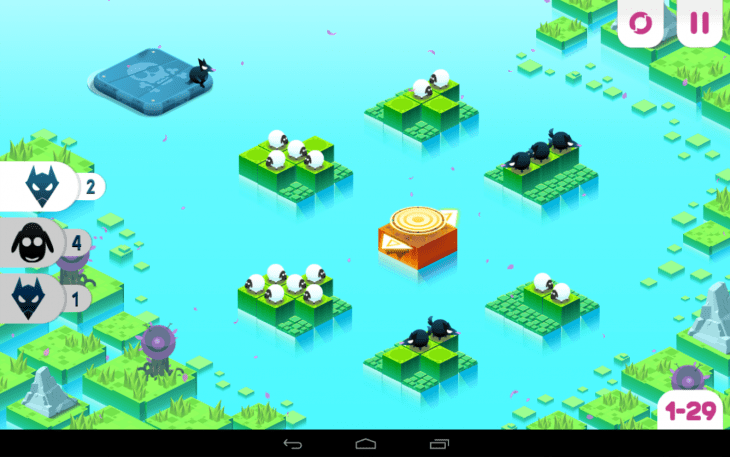 Here comes the puzzler part. Each level consists of three rafts that have to be filled with a set number of sheep. You can exceed the number, and the raft will sail off, but you won’t get a star for it. When you don’t have enough sheep for a raft, you just can’t finish the level and have to either restart or finish the level manually, if you have at least one star.

Now, the blocks of land have a set number of slots to accommodate the sheep, so when you start moving them from one island to the other, you have to know your math. The sheep will sink when you need to move them to an island with a lesser number of slots. The sheep will be sliced in twos if you need to get them through a laser fence. These halves might be duck-taped when you get them on the raft, but it is not immediately evident. You have to experiment. 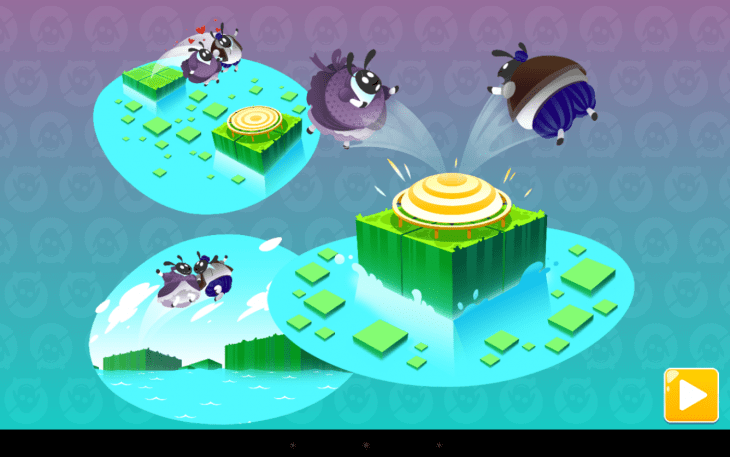 In the later levels, the game introduces new challenges and new elements. In come the wolves that eat the sheep and get so heavy they can’t jump anymore. Then, there are the bouncy mats that direct the sheep in the particular directions and divide them.

The first set of levels is quite accessible, yet might prove challenging. The second one is quite challenging, but the overall difficulty is harder than that of a casual puzzler. Especially with these looks. It can become quite mind-boggling at times just to figure out how to use the new element to your advantage, but when or if you do, you will feel proud of yourself. The puzzles are are quite unique in a way that sometimes there is an immediately obvious solution, but in most cases you have to fiddle with the sheep, and toss them around, losing numbers and seeing what the spikes and lasers and wolves can do to help you get the right number. It’s like Sumico done by John Kramer. 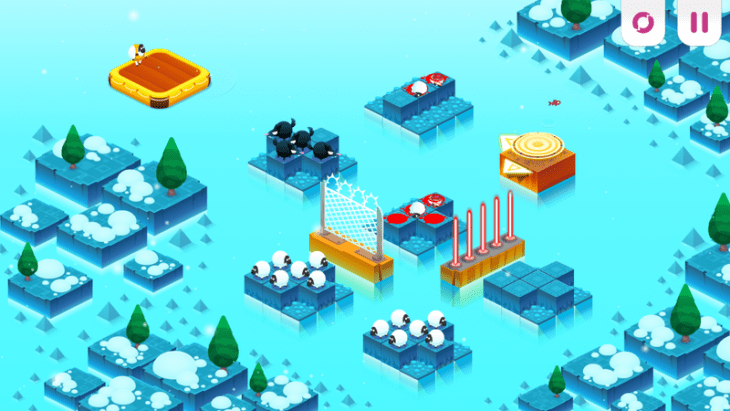 You move the sheep around by swiping and they jump from one island to the other, but note that they can only jump in groups – you can’t just manually divide them as you please. To divide them, you will need to resort to math strategy and use the elements on stage – bouncy mats, lasers, or murder by drowning. 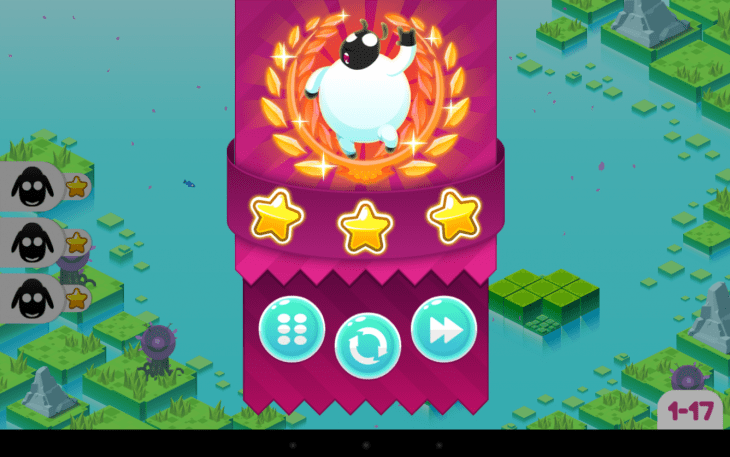 The game offers no IAPs, being a premium one-time purchase, and the offer is quite generous. You get a massive amount of gameplay time for your dollar, and provided each level can be cleared with 1, 2 and 3 stars, you will be replaying some of these quite a lot. The overall number of puzzles is 120, more than enough to get full of the bleeding sheep and weeping piglets. In fact, I don’t see myself getting as far as to the 120th level, but it does not make the game any less appealing. I just wish there were the occasionally available hints for the mathematics-challenged.

Finally, you need to score a certain number of stars in your current level pack to unlock the next level pack, so you can’t just make do with one-star scores all the time. This forces a replay ratio on some of the trickiest levels and ramps up the difficulty, which is a valuable asset for the fans of a decent puzzler. 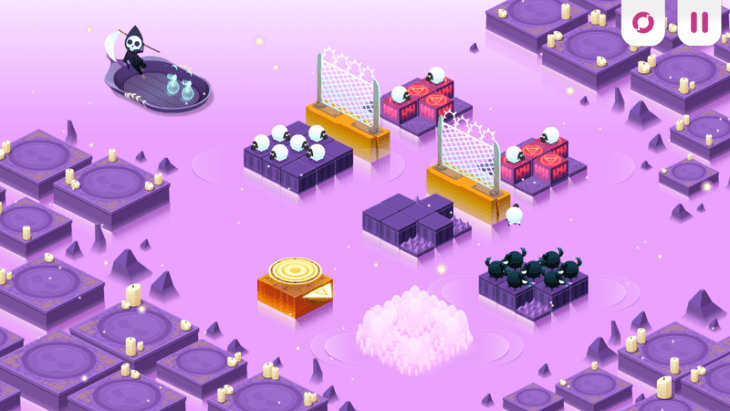 Divide by Sheep looks like a casual puzzle game, and it’s a great example of how the looks can be deceiving. As the game description DOES state it, you can disable blood in the parental controls, but I seriously doubt you still should grant your kids permission to play it. Slicing the animals and drowning them might not be a very educational experience coming from a mobile game.

That said, the art work is fantastic and I hate that the developers made the sheep and the pigs so cute – it make sit even harder to kill them. And when you look closer, the sheep actually shed tears of horror as you toss them from one island to the next one.

The music is quite entertaining, but I found myself muting it at a later stage. 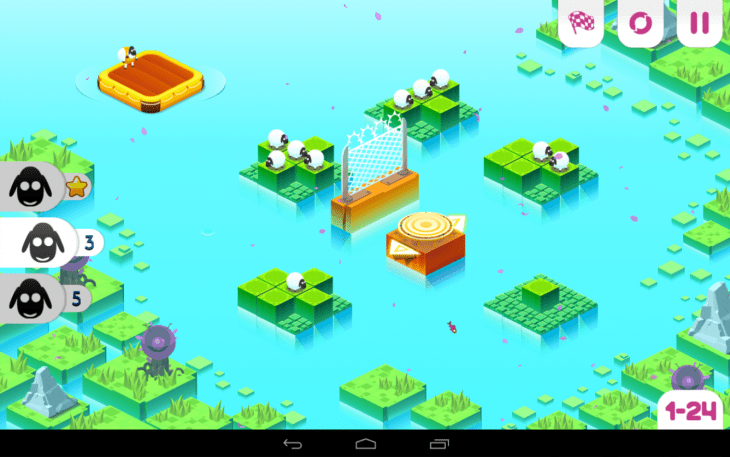 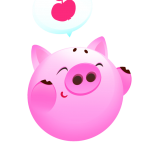 I find it hard to define the target audience of this game. I’d say it’s mostly the grown-up male fans of the math challenge with a decent difficulty curve. Why male? Because my girlfriend said the game was sick, and then her sister gave me a strange look and said it was “loco.” In the meantime, I shrugged and munched a few levels more with quite a satisfying appreciation of the clever puzzles and bright art concept. On a serious note, Divide by Sheep is a bloody serious math puzzler with a ridiculously cute art work – a cartoon-style Saw franchise with sheep.