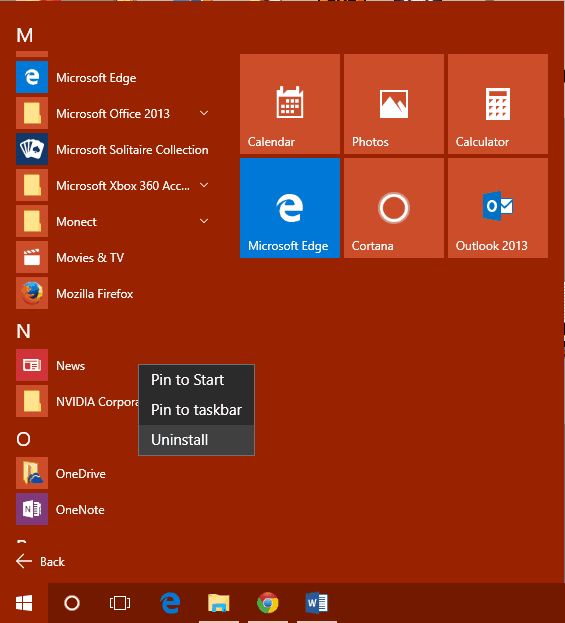 Doggins on Google Play store, iTunes or Amazon is priced at $3.99.

I’ve been toying with this game enough time to make up my mind, and I would probably go against the tide with this one. As cute as it is, Doggins’ charm escapes me – mind you, I usually play with a bunch of nephews and nieces kicking and pushing when they have better ideas about how to solve a puzzle or beat a level. This time, however, kids got bored quickly and asked for a different game. I persisted with the firm determination of getting through till the end, which didn’t change the fact that Doggins ultimately made me shrug and say ‘Is this it?’

A simple point and click journey, Doggins takes place in a terrier’s dream. The cute little dog falls asleep as its house flies to the Moon, where a squirrel (which turned out to be nothing like a funny squirrel I anticipated) gives Doggins an un-invite to a villainous party.

The squirrel leaves while Doggins has to wander around the moonscape, collecting some simple items and figuring out what to do with them.

The first nag here is the walking – you have to tap the direction you want Doggins to walk. You can’t just tap and hold till he reaches the place you want – you have to continuously tap until he reaches the end of scene, which is not too obvious until he stops moving. It makes gameplay even slower than it should be, and just feels awkward.

Second, Doggins doesn’t jump. What kind of dog doesn’t jump? I even saw a YouTube video of a two-legged dog jumping and running across the sea shore, so Doggins, being  a healthy little dog, should be able to perform a trick or two to make kids laugh. No, the dog doesn’t even run; it just promenades.

Third, I ended up tapping on everything just to see which things I can interact with. It wasn’t evident you could turn over the un-invite card and there’d be a bow-tie instruction, so when I found the piece of toilet paper hanging from the tree, I wrecked my head over what was I supposed to do with it, and even when I figured it would make a tie or a bow-tie, I was unable to fold it the right way until I found a small walkthrough video and saw the un-invite card can be turned over. 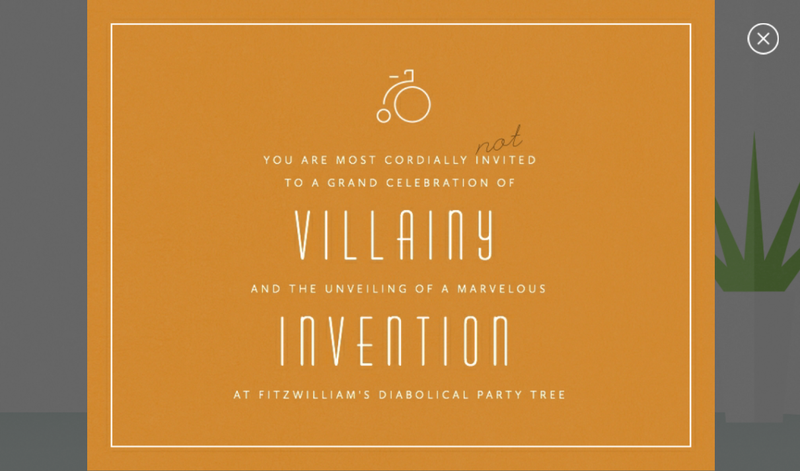 The somewhat perplexing way you never know how to tap to interact with things makes things slow. Once you have the gum and the moustache, you know what to do about them, but getting that astronaut’s shoe and the gum to work took a lot of tapping and walking around.

I see users writing how Doggins took them 15 minutes to solve, and if you are good at escape kind of games you probably will beat even that. However, I personally found the gameplay unintuitive and at times befuddling to the extent of irritation since there are no tips anywhere.

I may simply suck at point and click games, but the fact that the game is definitely the shortest game I’ve played on mobile with no replay value whatsoever, and suddenly the $4 price tag does not seem justified. 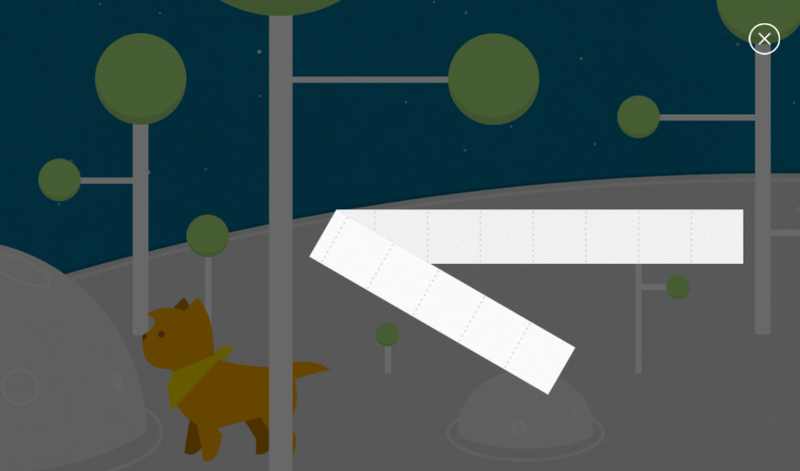 If there is anything I would praise about Doggins is the design – simplistic, geometrical shapes, pastel colors and minimum objects on screen make objects you can interact with obvious. What you don’t always know is how to interact with them. In fact, Doggins plays and looks like an interactive kids book, minus the intuitiveness of some objects.

The music is neat, but there are scenes with nothing but sniffing sounds, too. Is there an atmosphere to the game? There is, but it’s that of a lullaby that makes the eyelids heavy. 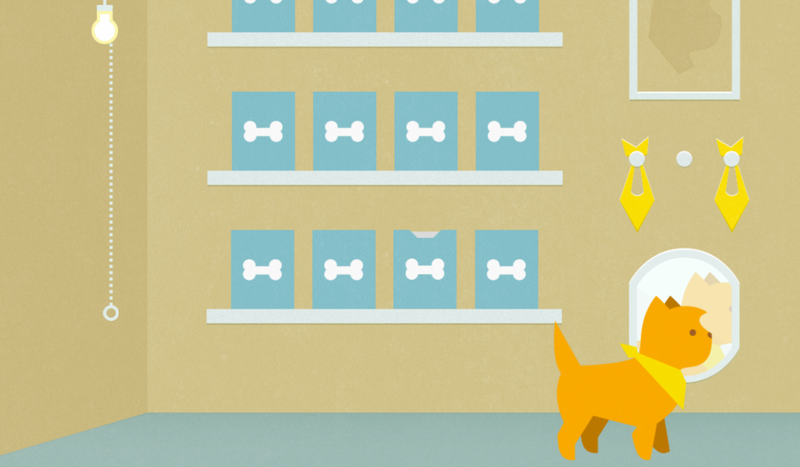 Doggins is a very short puzzler with cute graphics and classical music in the background. Its puzzles are rather simple, but the interactivity and controls system make for the real challenge, which is not the kind of challenge we appreciate in the puzzle games. Even if you get slowed down to figure out how to get that shoe off the ground, you are still likely to finish in 15-30 minutes of gameplay. I find it hard to say who the target audience is – probably terrier owners. As much as I tried to enjoy it, I left off unimpressed, or rather surprised because I didn’t understand I actually reached the end of the game, and provided you can play Shu’s Garden for free, or DaWindci Deluxe and Osmos HD for $1.99, I’d say Doggins is overpriced in the least.

There is artistic talent in the game, mainly in the design department, but the gameplay feels raw. I’m all for encouraging talented independent game developers, and Brain&Brain have the magic touch, but the way it is now, Doggins feels like a demo of a game for people who dress up their pets. Like Paris Hilton.