The entire Dungeon Hunter series has always been a solid choice for a hack and slash RPG on tablets and smartphones, but now that they’re on the fourth installment, is there enough innovation to separate this game from the other three? For the most part, the answer is yes, but even so this game is still lacking any real innovation from the dungeon crawler genre.

It’s not that there’s 100 other games exactly like Dungeon Hunter 4, but the new features aren’t exactly things we’ve never seen before. DH4 does have some very strong points though, and even with it’s weaknesses, is still a solid dungeon crawler.

Like I said, the game has it’s strong points, and graphics is definitely one of them. Dungeon Hunter 4 has some of the most detailed character and enemy models, and they look awesome. There are a lot of very popular games that have some pretty ugly interfaces, however, that’s not the case here — everything about the interface looks and feels like a game should in 2014. Even down to the gear icons, you’ll find great detail and polished designs throughout. 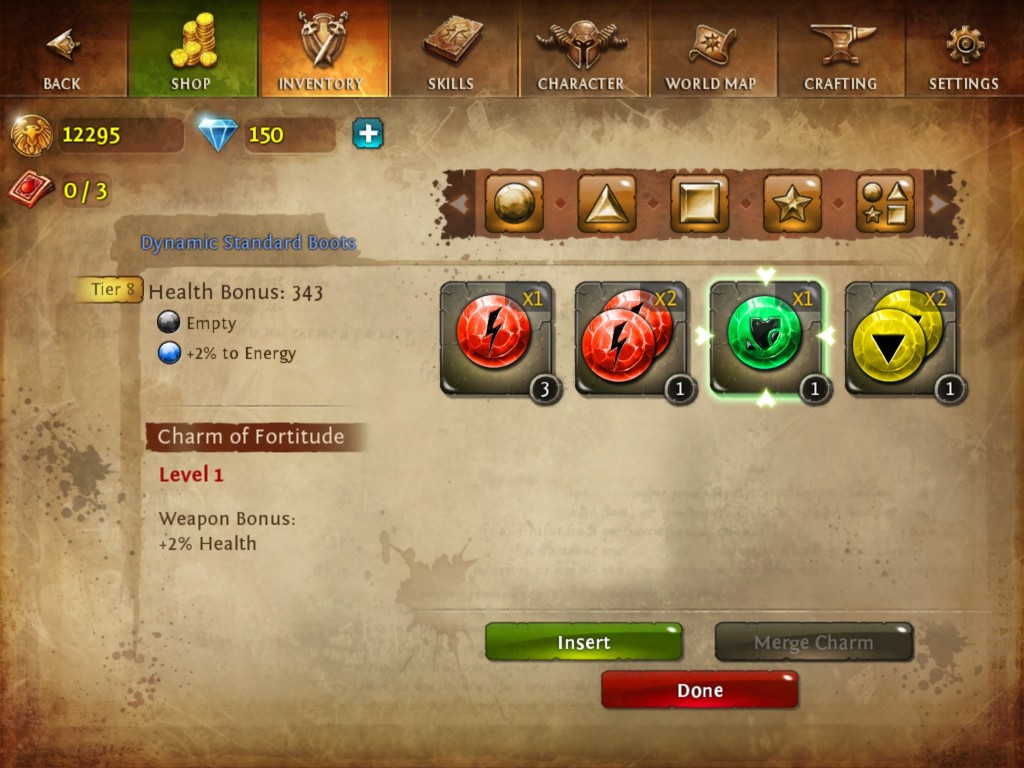 Graphics are also a big part of how intense the combat feels, and there are quite a few awe-inducing visual effects to make the battlefield even more epic. Despite being plagued by a rather boring fighting system (which I’ll get into later), the graphics from your character’s AoE skills can usually be entertaining enough. Another gorgeous element, is the scenery throughout the world — which is actually pretty large by the way. It’s refreshing to go from one area to another without really knowing what to expect, so many dungeon crawlers use the same recycled textures and overall theme, but DH4 does a good job of mixing it up. 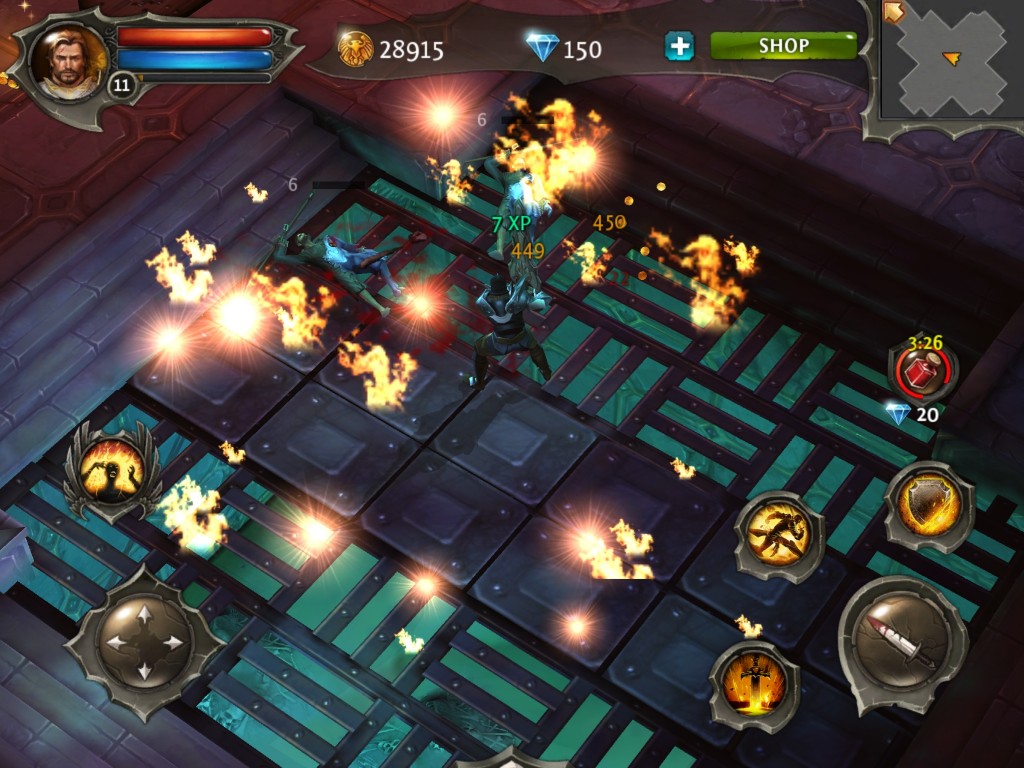 This is where the game unfortunately falls a bit short, and even though it’s not a complete disaster, some core elements of the gameplay just aren’t that enjoyable. Most notably for me, was that combat felt very stale, almost like you were just spamming buttons without any strategic use of skills. Of course, you could make the argument that I was just playing the game wrong — but I feel most would agree with me that even if you try to move around and avoid enemy attacks, you’d probably end up just taking more damage. However, that’s mainly a single player flaw, because when playing in a group it gets a bit more interesting. But even then you can really get away from how the game is full of extremely responsive enemies with fast attacks, and there isn’t a whole lot of ways to avoid taking damage; regardless of class. 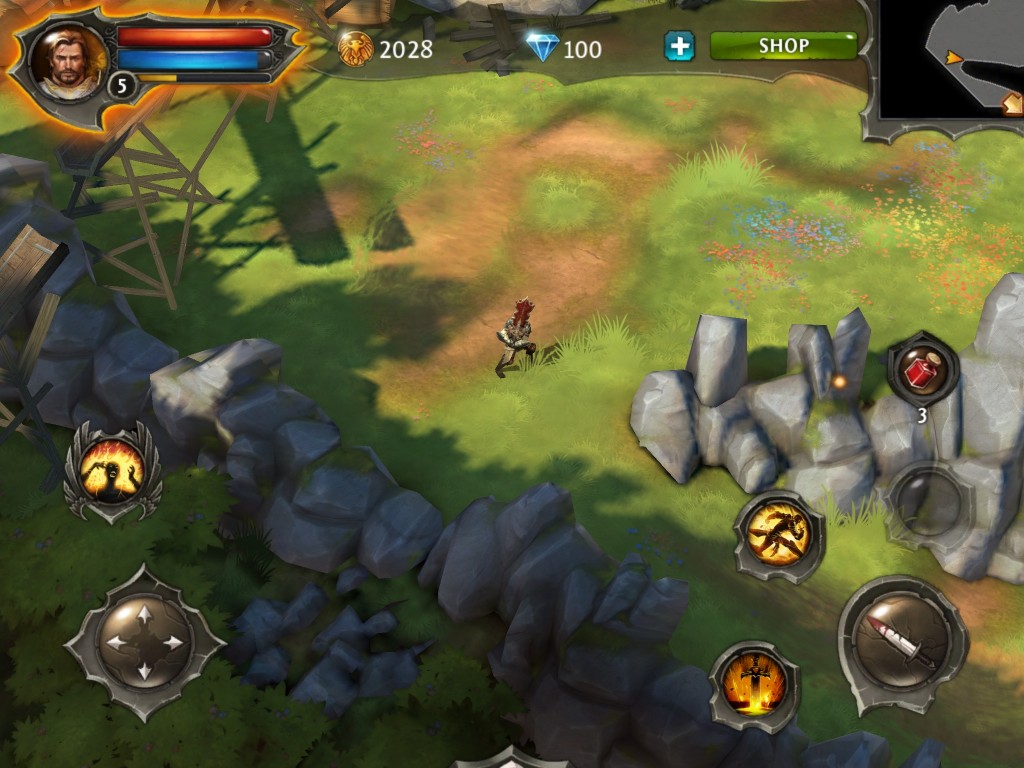 With all that being said, I’d still like to touch on the parts of DH4’s gameplay that I really enjoy, for example the open-world setting mixed with a structured level background. I enjoy being able to explore the world without being refined to playing certain levels, but on the other hand it is nice to have that structure, and this game has a perfect combination of those two elements. Another thing that should be noted, is that everything is very responsive and smooth, I rarely ran into any lag issues or slowness when playing on my iPad. Even when playing with others online, there wasn’t any connectivity issues, which is usually a problem with other installments of this franchise.

Still, even with all those positives, it’s not really enough to consider this a masterpiece in regards to gameplay mechanics. Everything is just a bit too fast-paced, and the player never really gets enough reaction time to do anything but start spamming their attacks in the direction of the most enemies. Beyond aiming for certain targets in a specific order, there’s not much else to it other than using your abilities at the right time.

DH4 is a pretty addicting game, partially due it’s core-simplicity with a few complex overlays, but also because it’s just nice to look at. I’ve always thought that cosmetics were a major part of any dungeon crawler, since most players are grinding currency or reagents to craft awesome gear — and what makes it so awesome isn’t so much the great stats, but the sweet design. With such an array of item models that never feel boring or lame, it’s no wonder people keep coming back to see what they can find next. There’s an unfortunate amount of emphasis on gems, but it’s not entirely necessary to ever make a single purchase to really enjoy the game, however there are some things that you simply won’t be able to obtain otherwise. 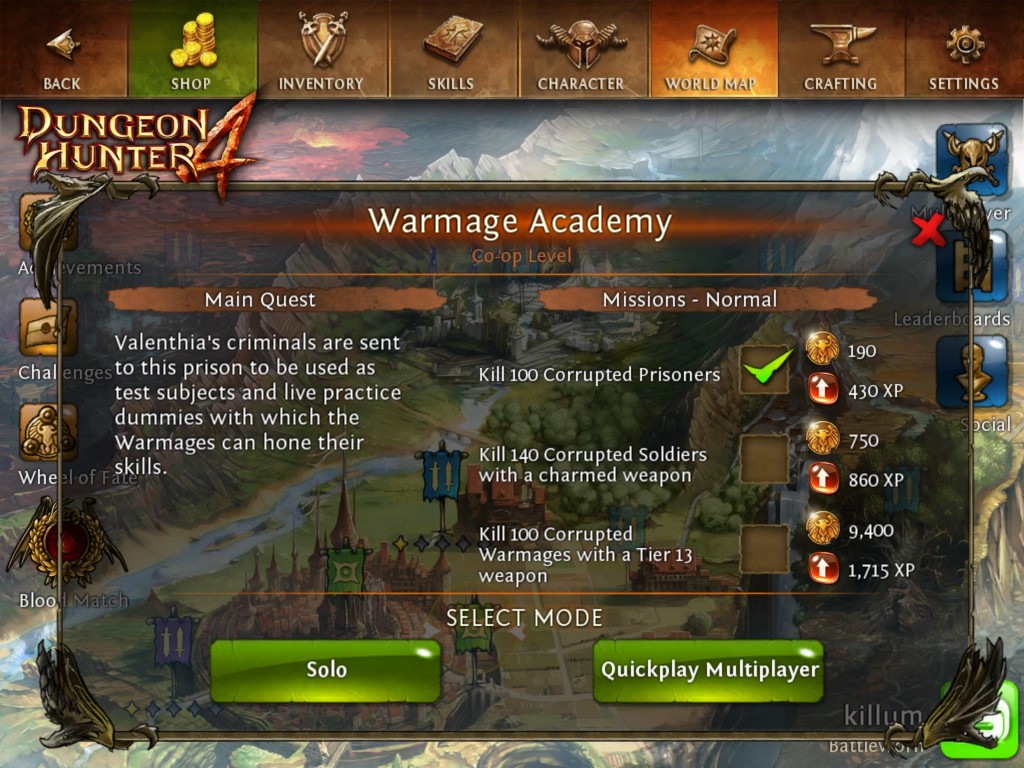 The huge playing field is another plus, with so many areas to explore, quests to complete, and enemies to defeat, you get hours and hours of entertainment. You can even go back to areas you’ve played before and earn some extra rewards, instead of just doing it to train up for your current missions. Having four classes really helps expand the amount of time before you get bored of the game entirely, and whenever I felt worn out playing my Battleworn, I’d switch over to my Warmage and play with that for a while. There’s still the stale combat hindrance that limits your desire to play this game for hours upon end, but it’s not the end of the world.

To me, it would take too much a complete overhaul to really make this game a masterpiece, but there’s still solid ground to make it one of the better dungeon crawlers on the market today. I wouldn’t be surprised at all to see a fifth class introduced to the game, as well as new content areas and multi-player games. I’d like to see some changes to the overall pace of combat, but that idea may be a bit too far-fetched to fathom at this point. Dungeon Hunter 4 can always fall back on being an easy to pick up game that is extremely appealing visually, as well as rewarding for the time spent playing — meaning any content they add that follows the current format will most likely succeed and be welcomed by the player community. 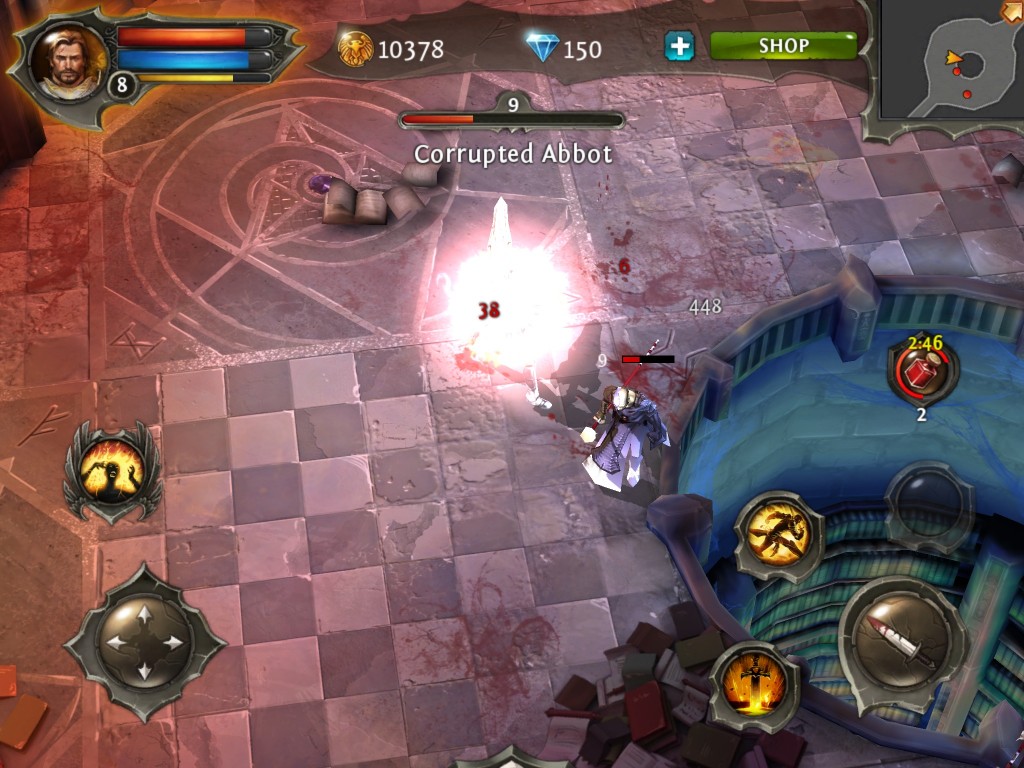 I can’t help but wonder what the game would be like if the combat was a bit more like Eternity Warriors 3, a game that had a wonderful combat system, but could learn a thing or two from DH4 about graphics and content structure. Perhaps a “Dungeon Hunter Warriors of Eternity” game is in order? Probably not.

A constant feeling of moving forward, mixed with the ability to go back and re-play old content whenever you’d like – and a variety of reasons to do so – is a really great thing to have in any game. I can’t think of a reason any RPG fan wouldn’t want to try out DH4, it’s free, and a really great game overall. One thing I’m now convinced of, is that all of the aspects of a perfect dungeon crawler are out there, but there not in the same game just yet. Dungeon Hunter 4 has shown me new heights for a game of this genre visually, and also offers a fantastic story-line progression.

Click here to check out Dungeon Hunter 4 on the Google Play Store!

Click here to check out Dungeon Hunter 4 on the Apple App Store!

Have you played DH4 yet? What did you think of the game, and the review? Post your comments below!