Whether you love or hate them, there’s no denying that the Dungeon Hunter series has become a staple in the mobile Action-RPG genre. It’s popularity stemming from a long running franchise that started in the very early stages of iOS/Android gaming, and has evolved into a visual masterpiece. Gameloft is the developer behind the DH series, which of course means freemium (as were all previous installments), but that isn’t always the end of the world — so long as the game is still playable without spending cash on energy or something ridiculous like that.

As always, it looks really good!

The first thing I said about this game is “wow, it looks great” — which is the first thing I usually say about a Dungeon Hunter game. Alas, first impressions are not always on point, as would be the case here. I won’t deny that the game has gorgeous visuals, but only when everything is working properly. I know the game was just released, but there are many graphical errors I’ve already encountered while playing. The most common would be giant solid colored squares that appear briefly when certain actions are being executed, but there are some more major ones such as your character falling through the map, and forcing you to restart the level. One time, I had just completed a level, and the screen slowly faded to black, but then it just sat there with the music playing until I eventually restarted and lost my progress. 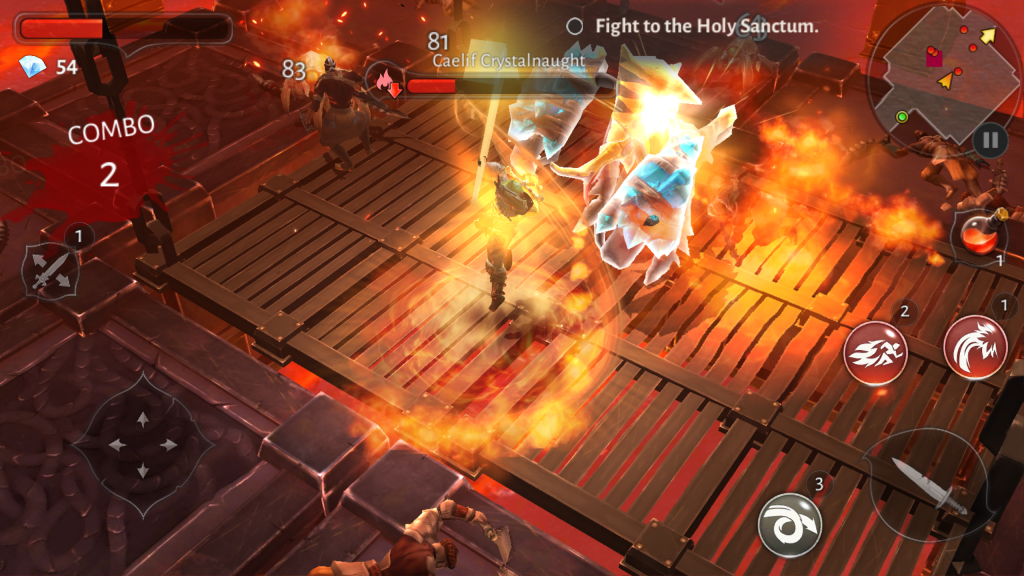 Bugs and glitches aside, I really appreciated the variety you encountered from one campaign mission to the next. Each one had it’s own individual layout, and there are actually a lot of unique environments as well — so it doesn’t feel like you’re playing through one large area every 5 – 10 campaign missions, but rather something brand new every time. The characters and monsters look great, as well as the attack animations and the many abilities you can acquire and execute. I did have some frustrating lag spikes when a lot of combat with multiple enemies was taking place, but the game seemed to preform much better on iOS than Android. I was using a Note 4 and an Air 2 which also might have been the difference, but the lag was certainly frustrating on a device that is pretty new and should be more than capable.

My biggest complaint with the Dungeon Hunter series has always been stale combat, and I’ll just come right out and say that problem hasn’t really been fixed in DH5. They’ve made a few adjustments here and there, such as the “roll” ability addition, which can help mitigate some damage in certain situations. Having the abilities to swap out weapons and skills with anything you manage to acquire is also nice, and can help you better prepare for a particular level. The problem is that everything eventually turns into a gear check, and regardless of how skilled you are, you’ll probably have to grind some more gear to fuse or some exp to level up. 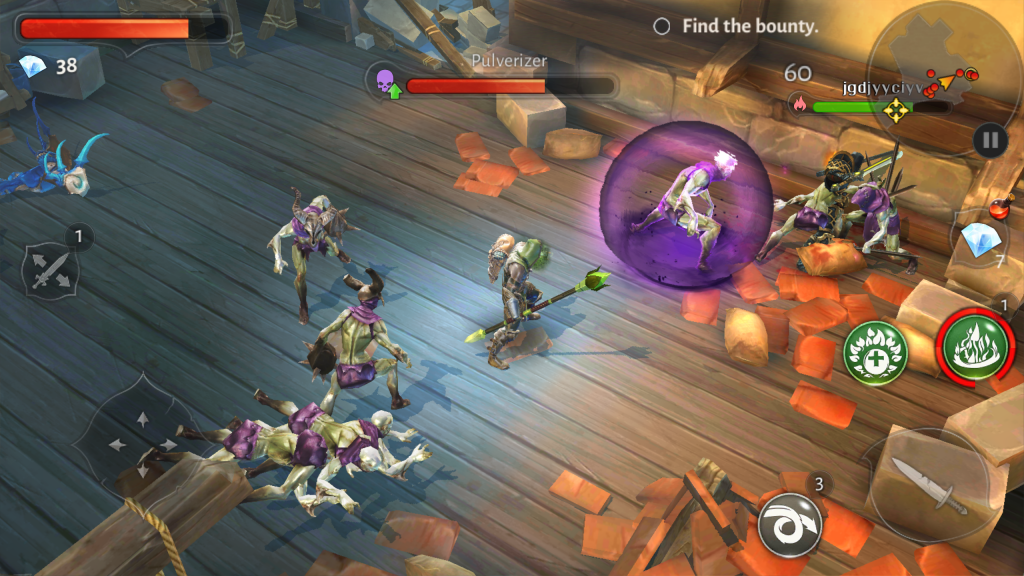 Grinding isn’t the end of the world, and there are plenty of mobile games where you’ll have to grind. Still, it just feels all the more stagnant in DH5, like all you’re able to do is quick use your abilities, hold down the attack button, and pray that everything dies before you do. Often times if you try to roll away after using an attack combo, you can easily roll the opposite direction you want to if you don’t wait a second afterwards — but waiting usually means you’ll take more damage. Movement is already rough to incorporate into combat, but once lag comes into the equation, you’re really only able to spam attacks and hope for the best.

Then, there’s the UI, which is also rough. For some reason your inventory options are essentially split up into several different menu categories, which makes inventory management quite the hassle. Instead of a simple inventory window where you can pick any one item and equip, sell, or fuse it, you’ll have to choose if you want to manage equipment, fuse items, or sell items — and then pick the ones you want to work with. It sounds minor, but when you are working with inventory as regularly as you are in this game, you start to wonder why they didn’t simplify this a little bit. Lack of options when it comes to controls is also a head-scratcher, as the in-game combat UI is not customizable at all.

Briefly entertaining before becoming a chore

Although I’ve said quite a few negative things about the game, I’d still say I enjoyed it for the first few levels. It was a cakewalk, but I liked seeing the nice graphics and travelling through the well designed dungeons, and getting to see a new environment every few minutes was definitely a treat. Once you unlock Strongholds it seems like the game is going to start to open up, but unfortunately, the fun stops not too long after that. Attacking enemy strongholds gets extremely repetitive since they’re all virtually the same, but with different types of enemies, and since everything just goes in at once there doesn’t seem to be much strategy involved. 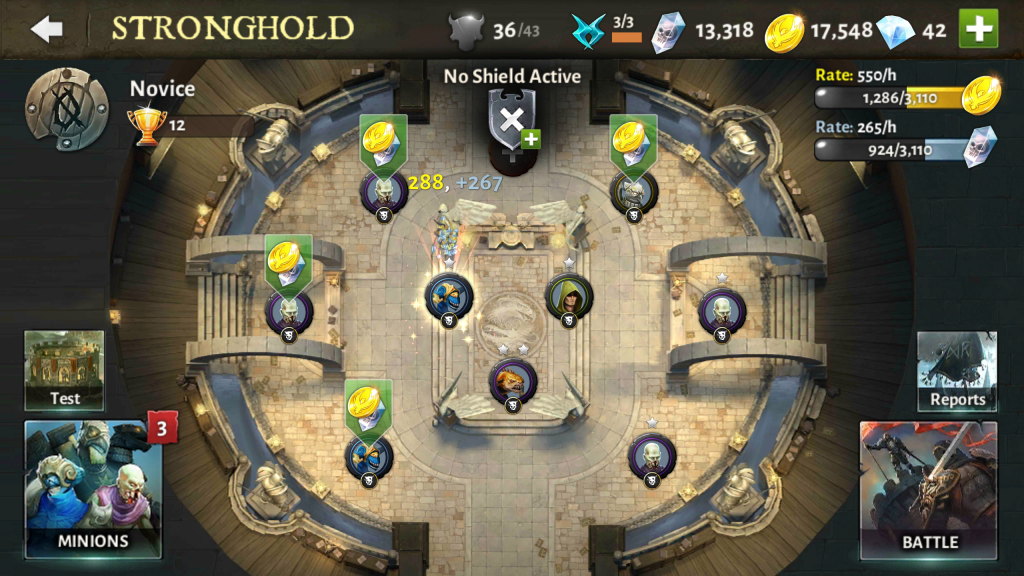 Other than the Campaign and the Strongholds, you really don’t have anything else to do with the exception of “Events” which appear to just be a quick few waves of combat in an arena with various enemies. Stronghold battles are limited to a energy cap of 3, which is replenished one at a time, once every hour — unless you level up. The other energy cap is for campaign missions, which is rarely depleted until you reach level 15-20, depending on if you fail missions regularly. I’ve always hated energy mechanics, unless they are done in a way that doesn’t limit the player from doing certain things, however that’s not the case here.

If you’ve got a lot of patience, and happen to enjoy holding down a button while flashy animations appear on-screen, Dungeon Hunter 5 would probably be appealing to you. There’s still a part of me that wants to come back and play some more now and then, but I know in my heart there are much better Action-RPGs I could be playing.

In DH5, there is a premium currency called gems, which is used to open chests and refill energy/stamina. You can obtain gems either by paying for them with real money, completing normal missions in campaign, and competing in weekly events. This is one area where people seem to think DH5 creates a pay-wall, but in reality, they’ve actually done IAPs in a rather fair way. Gear chests have a cost of 50 gems, which equates to roughly $5 USD per chest. These chests are the only way (besides doing very well in weekly events) that you can get five star maximum gear, which eventually is required to progress in campaign.

By competing in weekly events, you can easily score ~30 gems per week, which allows you to open a premium gear or minion chest once every week or two (depending on how many new normal missions you complete) at no cost. Once you get your first 5 star piece of gear, you’ll likely spend the next few weeks or even months actually fusing and evolving it up to 5 stars and maxed out. During those weeks, you’ll also be getting more free gems, which you’ll eventually be able to spend on more 5 star gear.

This is why I say DH5 has no pay-wall, but that still doesn’t pardon the energy/stamina mechanics I mentioned earlier. I don’t have much of a problem with the Stamina, but Energy is painfully punishing at higher levels and should be removed from the campaign, but not necessarily the events.

As much as I’d love to say that Dungeon Hunter 5 was the game that truly revolutionized it’s series, that simply isn’t the case. They’ve struggled to break free from a constant button mashing gear check feel that plagues the combat. Although Strongholds were an interesting idea, they don’t come close to cutting it as the only source of content other than the campaign. In the end, DH5 falls short of anything truly spectacular, with the one real highlight being a wide variety of unique visuals.