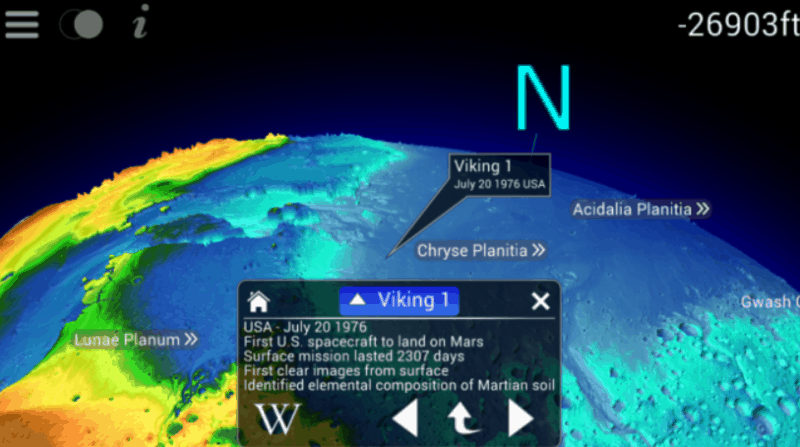 Once in a while, we like to pay your attention to Google Play’s hidden treasures. Elevation Mars is one of them, and provided you like apps that are visually gorgeous, fun and educational; you are now on the right track.

Humans explore outer space, but our pace is significantly slower than that of our movie industry depicting our spaceships endeavoring to far-away nooks of Galaxy. A more realistic perspective, however, is in humans exploring and maybe even colonizing planets in our own Solar System, and from this viewpoint, Mars has been en vogue for quite some time.

Elevation Mars lets you explore the red planet in details – planetary terrain with its deepest canyons and highest peaks, with factual information from Wikipedia and NASA satellites. You can create impressive images of Mars from any angle and location, colorizing and elevating its terrain for cinematic effects. If you are an amateur astronomer, or dream to be an astronaut one day, Mars Elevation will teach you a lot of useful information and interesting facts about our neighboring planet. 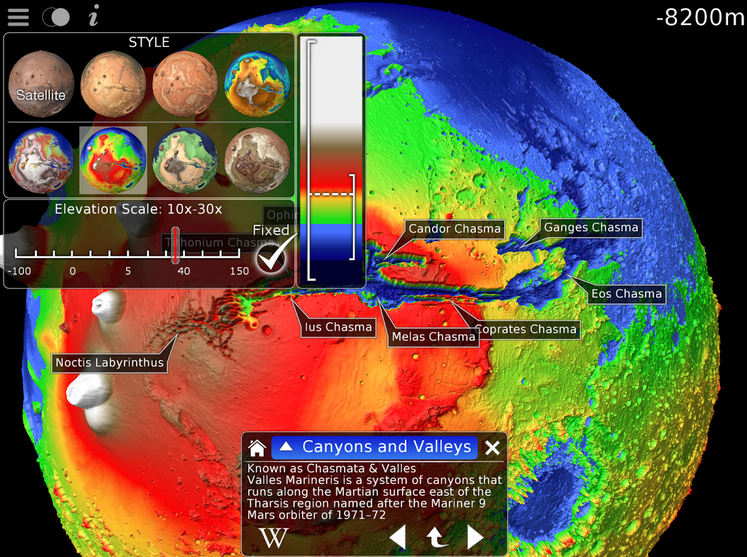 It is difficult to say whether it’s a game, or an app. There aren’t enough gaming elements for it to be a game, but it’s definitely more than just an educational app, since it allows users to let their imagination fly, altering the planet to their hearts’ content.

Once you launch the app, you can get to exploration straight ahead or check out help documentation. The exploration itself is rather smooth, and the app sports high level of interactivity, so when you tap or drag your fingers across the screen, you will be able to view the planet from any angle, rotating, panning, zooming in and out, which is also a great way to create your own high-res 3D imagery of the red planet you can use as wallpaper on your device, or share via social networks.

Try Your Hand at Terra Forming

The main tweak you can perform here is the elevation exaggeration high up to +150, and low down to -100, which changes the Martian landscape completely. You feel as if you were creating a planet on your own. Additionally, you can adjust the imaginary sea level, altering the planet altogether. This is called terra forming, and that is what humans plan to do once they set foot on Mars with ample equipment to start a colony there. So, you can start ahead of our technological evolution and flood the planet, draining some areas, creating continents for colonization.

The amount of data provided in the app is quite impressive and ample for educational purposes if you would like to learn the locations and names of landing sites, canyons, craters and mountains. All that data is pulled from Wikipedia and spiced up with imagery from NASA satellites. 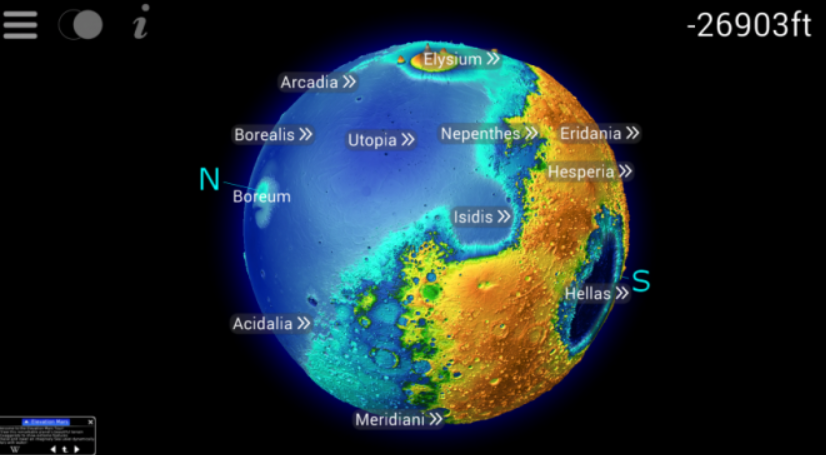 Elevation Mars sports eight color schemes, from yellow dusty to red ranging in intensity and contrast, and a separate terra form color scheme. When you choose a color scheme, there is a color slider bar you can use to change the original scheme’s contrast and find the level you like best.

Yes, you can just browse to Wikipedia and read Mars-related information there, but it won’t be that fun. Elevation Mars wraps that factual data in a neat interface with gorgeous imagery, adding a bunch of tweaking elements that enable you to toy with the planet’s landscape.

The one downside here is Wiki links open in your browser, not from within the app.

Sharing the tweaked images of Mars on Facebook, or via email and text messages is also a welcome feature for the modern folks documenting every step of their lives. 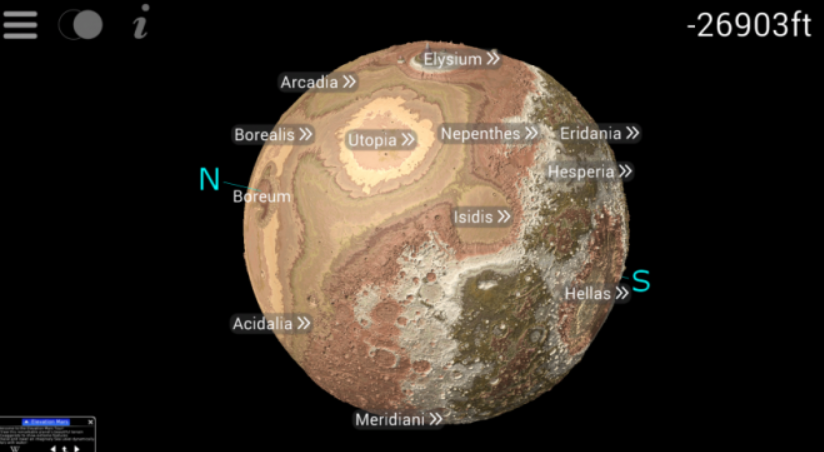 The app runs smoothly, although some large imagery may load with a barely noticeable lag. Overall, the app works fast and the uncluttered interface makes data digestion user-friendly.

The info panel is intuitive and provides detailed information about each elevation point. The interface is somewhat on the minimalist side, but it complements the vibrant 3D imagery and sci-fi themed design. 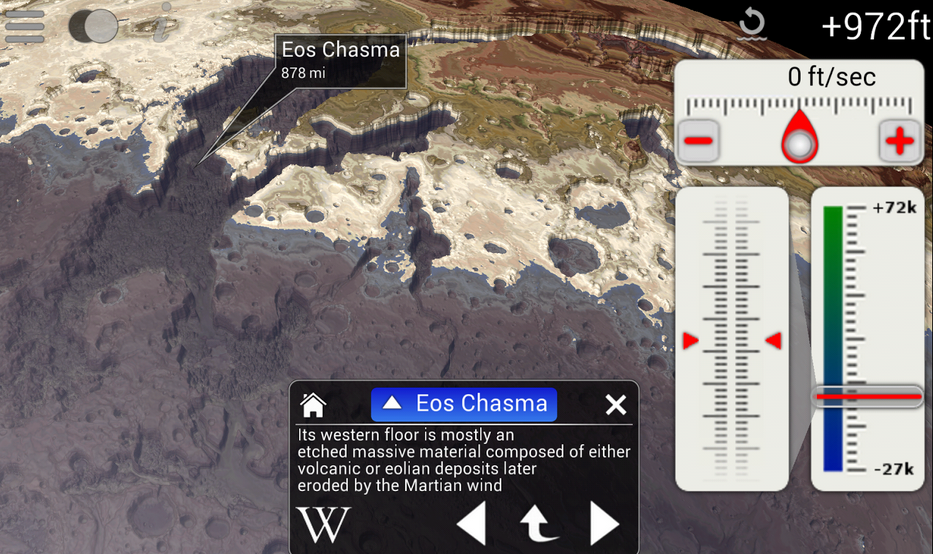 Elevation Mars is not a game, but neither is it a boring educational app. It’s a curious mix of both, with a block of factual information about Mars, which is its educational part, and a visually stunning interface featuring 3D topographic model of Mars you can toy with, altering elevation levels of specific landscape elements, or going as far as terra forming it, adding water, which is its fun part.

It’s a great learning and exploration tool for the beginning astronomers and sci-fi aficionados, so if you are interested in learning facts about Mars in a fun interactive way, this app is for you.